It's new comic book day and there's a little bit of everything available today. There's some interesting new offerings from DC Comics for example, some great on-going titles from the indies and if you've been waiting for a long read then the latest trade paperbacks are for you. Check out this week's notable new comics available at your local comic shop or online digital retailer. 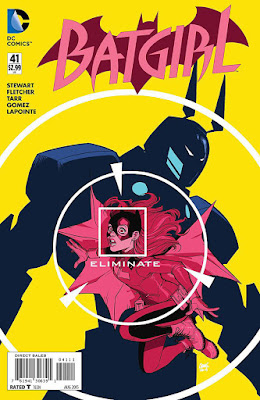 Written by Cameron Stewart and Brendan Fletcher. Art by Babs Tarr. Cover by Cameron Stewart. There's a new Batman in town…and that spells bad news for Barbara Gordon! She's already got enough upheaval in her life, with her roommate Frankie in on her biggest secret…and now she's looking to get even more involved in Batgirl's business! Cover price $2.99. 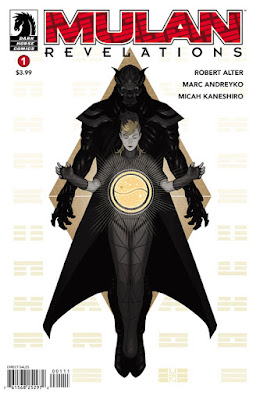 Written by Marc Andreyko. Art and Cover by Micah Kaneshiro. Though the future boasts endless technological wonders, only a very few can afford access to them. As a new virus rages through the rich and poor, threatening all of humanity, a warrior is awakened to stop the evil puppeteers behind it all! Centuries after her ancestor and namesake fought for China, a new Mulan has been chosen by the ancient Chinese immortals in a final battle for the world! Cover price $3.99. 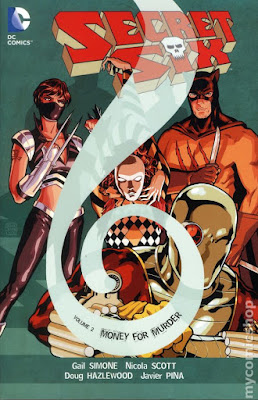 Volume 2 - 1st printing. "Money for Murder!" Collects Secret Six (2008-2011 3rd Series) #1-14. Written by Gail Simone. Art by Nicola Scott and Doug Hazlewood. Cover by Cliff Chiang. Join Catman, Scandal, Deadshot and Ragdoll as they hit the road on the run from some of the world's most dangerous killers! A contract has been put out on the lives of the Six, but the team has some tricks - and a whole lot of bullets - up their own sleeves! Then, with Batman's cowl up for grabs, two of the Secret Six decide they should be the new Dark Knight! Softcover, 336 pages, full color. Cover price $19.99. 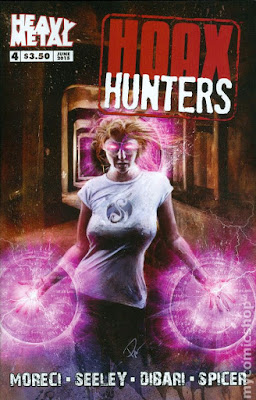 Written by Steve Seeley and Michael Moreci. Art by Chris Dibari. Cover by Rob Prior. The acclaimed Image Comics series continues at Heavy Metal! The flagship title of the Heavy Metal comics line continues with this must read issue! Regan's powers are tested by a growing threat and Jack faces off with a multidimensional killer! This month's installment has all the exposition longtime readers are looking for with plenty of action for newcomers. Cover price $3.50. 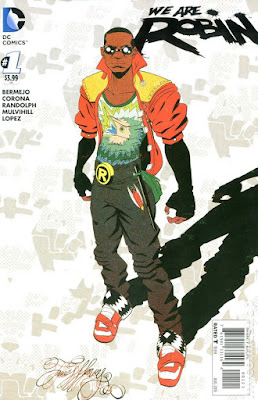 Limited 1 for 25 Retailer Incentive Variant Cover. Written by Lee Bermejo. Art by Rob Haynes and Khary Randolph. Cover by TBD. Spinning out of the pages of BATMAN! The teenagers of Gotham City have adopted the 'R' and made it their own. A new Robin? No, HUNDREDS of new Robins! Cover price $3.99. 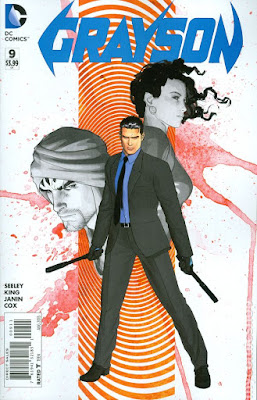 Written by Tim Seeley and Tom King. Art and Cover by Mikel Janin. Everything changes as Helena takes over SPYRAL! Plus: Grayson gets a new partner! Cover price $3.99. 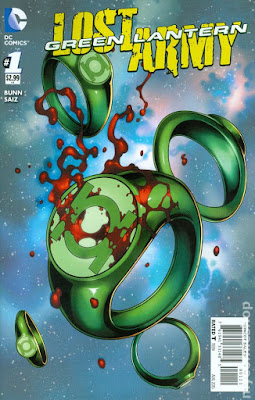 Written by Cullen Bunn. Art and Cover by Jesus Saiz. Imagine waking up in a strange place where you didn't recognize anything, and everyone you knew and loved was nowhere to be found. Now imagine that you are a Green Lantern. The rest of the Corps is missing, you don't know where you are and there's not a Power Battery to be found for as far as your ring can scan. Where are you? How did you get here? Those are just two of the many questions facing our heroes. Starring John Stewart, Two-Six, Kilowog and Arisia, and featuring a surprise guest-star we promise you'll never predict, LOST ARMY is an incredible journey of discovery, survival, morality and heartbreak. Never has the Corps been challenged in this way - and not everyone is going to make it home! Cover price $2.99. 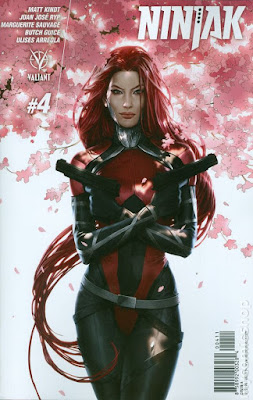 Written by Matt Kindt. Art by Marguerite Sauvage and Butch Guice. Cover by Jelena Kevic-Djurdjevic. WHO IS ROKU?! The breakout star of the hit of the year stands revealed as we learn the origin of Ninjak's newest nemesis! But who is Roku - the seemingly indestructible warrior who's proven to be one of the deadliest assassins in the Valiant Universe - and what impact does she have on Colin King's future? A special standalone tale of the world's most lethal woman! Cover price $3.99. 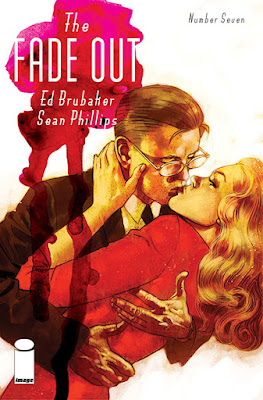 Written by Ed Brubaker. Art and Cover by Sean Phillips and Elizabeth Breitweiser. Charlie is falling for the replacement blonde... but is he working her for information, or is she playing him for her own ends? Cover price $3.50. 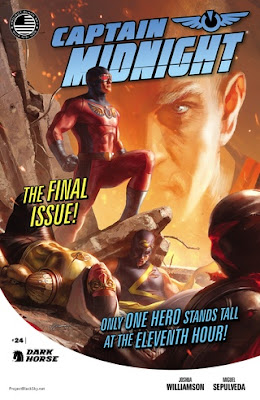 Written by Joshua Williamson. Art by Miguel Sepulveda. Cover by Michael Broussard. Facing the greatest threat in the world-the unstoppable madman known as the Archon-Captain Midnight and his allies need an ace in the hole to help pull out a victory! Thankfully, Cap has a plan . . . but will it be enough to stop the Archon when everything else has failed? Cover price $2.99. 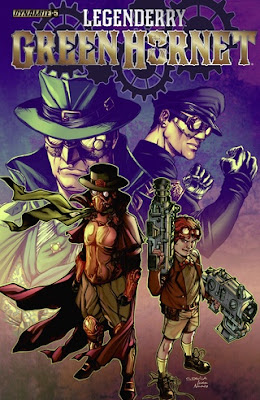 Written by Daryl Gregory. Art by Brent Peeples. Cover by Sergio Fernandez Davila. This is it - the climax to the action packed series! The Green Hornet and Brass Hornet throw down with the Veiled Lady and BlackMass, while Kato and Grimes take on Tik-Tok's Deacons. It's steampulp / kung fu madness! Cover price $3.99. 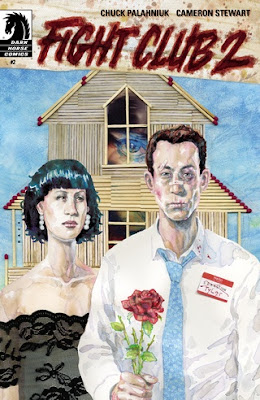 Written by Chuck Palahniuk. Art by Cameron Stewart. Cover by David Mack. For the past decade Tyler Durden's been sneaking out of Sebastian's subconscious. Sebastian has a nice wife and a nice kid. He has a nice home in the suburbs. Nice-enough neighbors. Now all that's going up like so much potassium permanganate. Cover price $3.99. 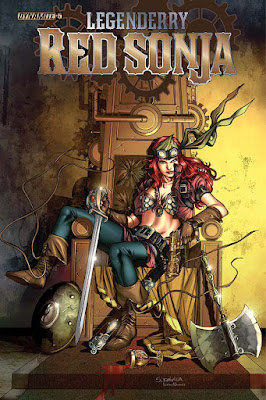 Written by Marc Andreyko. Art by Aneke. Cover by Sergio Fernandez Davila. After franken-monsters, submarine escapes, shark attacks, and shipwrecks, can a mentally and physically exhausted Red Sonja defeat the evil of Victor Frankenstein before he unleashes his master plan upon the world of Legenderry? What new monstrosities have sprung from Victor's deranged and fractured psyche? And will the 'rebuilt' Captain Nemo and Elizabeth Frankenstein help Red Sonja's cause...or be the death of her? Find out all of the answers in the stunning conclusion to Red's first Legenderry solo adventure! Cover price $3.99. 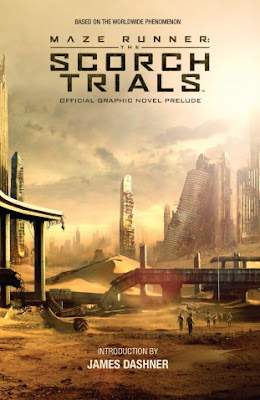 1st printing. Written by Jackson Lanzing. Art by Marcus To. Cover by Scott Newman. What's to Love: With over 6.5 million copies of the Maze Runner series of books sold and a franchise-launching film that earned over $340 million worldwide, it's plain to see fans are in love with this sci-fi series about a group of young adults who are subjected to sinister experiments in the wake of a global catastrophe that kills most of the Earth's population. Readers got their first taste of Maze Runner comics at last year's San Diego Comic-Con panel and then in the film's Blu-ray release, and we've added three more stories that serve as an introduction to new characters from the upcoming second film, Maze Runner: The Scorch Trials. Softcover, 128 pages, full color. What It Is: As anticipation for 20th Century Fox's Maze Runner: The Scorch Trials ramps up (out in September), gain more insight into the Maze Runner cinematic universe with this anthology collection of five short stories that go deeper into the lives of several key characters that feature prominently in the upcoming film, including Aris, Ava Paige, and Mary Cooper. Cover price $14.99. 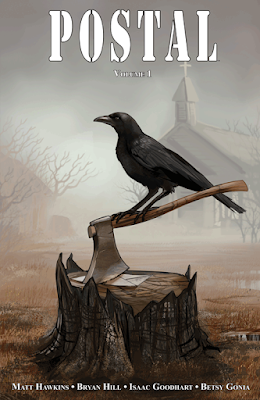 Volume 1 - 1st printing. Collects Postal (2015 Image) #1-4. Written by Bryan Edward Hill and Matt Hawkins. Art by Isaac Goodhart. Cover by Linda Sejic. SPECIAL LOW INTRODUCTORY! The first volume of Top Cow's bold new ongoing series POSTAL brings readers into the fictional town of Eden, Wyoming, a place founded by criminals for criminals. A place where, despite its inhabitants, no crime is allowed. Local postman Mark Shiffron has Asperger's, and through his peculiar eyes we see a town struggling to keep its fragile peace, a town on the constant brink of chaos. When a murdered woman's body is found on Eden's main street, Mark's need to solve her crime leads him into darkness and truth about the town he's known his entire life and the hidden realms of his own psychology. Co-writers BRYAN HILL & MATT HAWKINS work with newcomer ISAAC GOODHART to take an unflinching look at the cost of justice and the price of redemption through a tale set in the murky soul of America's heartland. Softcover, 128 pages, full color. Cover price $9.99. 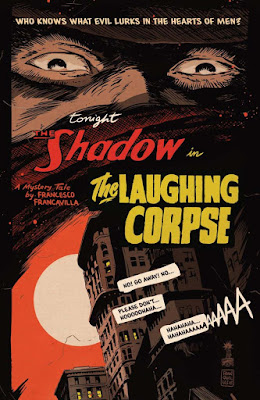 For 100 issues, The Shadow has known what evil lurks in the hearts of men. To commemorate, Dynamite Entertainment brings together master storytellers to celebrate the purveyor of justice who proves that crime does not pay. Join MATT WAGNER, HOWARD CHAYKIN, and FRANCESCO FRANCAVILLA as they pen and ink stories so mesmerizing they don't even need a girasol! Also joining us will be The Shadow alumni MICHAEL USLAN, CHRIS ROBERSON, and VICTOR GISCHLER, paired with top artists, to show the weed of crime bears only bitter fruit! This is ONE centenarian celebration you WON'T want to miss. Cover price $7.99. 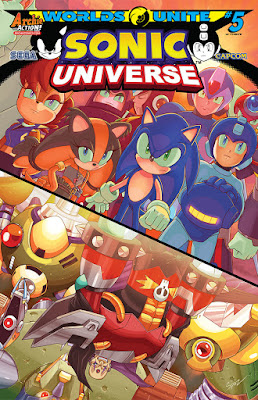 Worlds Unite Act II: Part 5 - Written by Ian Flynn. Art by Edwin Huang and Gary Martin. Cover by Patrick Spaz Spaziante. The next exciting chapter in the Sonic/Mega Man 'Worlds Unite' crossover event starts here! 'Worlds Unite,' Part Five: The worlds of Sonic and Mega Man have been joined together by Sigma, and it's going to take a full-on army of unified heroes to make it right! Scratch that, it's going to take some heroes and some villains! When the mysterious and malicious Xander Payne inexplicably arrives with Drs. Eggman and Wily in tow, our heroes get new insight into Sigma's plans! Story continues in Sonic Boom #9! Cover price $3.99. 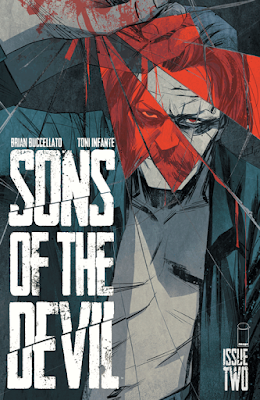 Written by Brian Buccellato. Art and Cover by Toni Infante. After the suspicious murder of his friend, Travis tries to move on with life. But when his girlfriend Melissa follows a clue that might lead to his birth family, they wind up in the crosshairs of a killer. Also, a look into the past and the cult of David Daly! Grounded, character-driven psychological horror. Cover price $2.99. 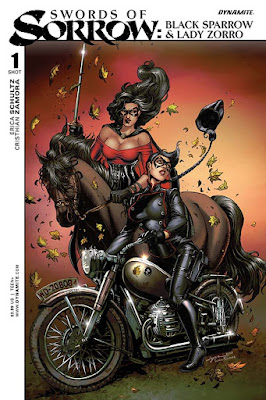 Written by Erica Schultz. Art by Cristhian Zamora. Cover by Joyce Chin. Lady Zorro and The Black Sparrow, two women from different times, join forces to fight Prince Charming's Shards of Chaos in a prehistoric land. With their Swords of Sorrow, they fight to keep an ancient stone with mystical abilities out of the Prince's grasp. Cover price $3.99. 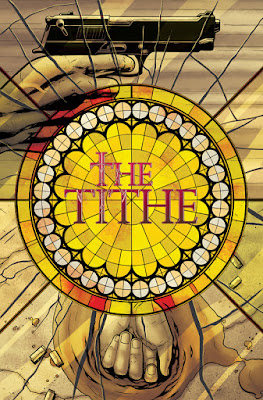 Written by Matt Hawkins. Art and Cover by Rahsan Ekedal. The penultimate issue of the first arc turns up the tension as the media and public celebrate the outlaw while legal issues and angry politicians interfere with the FBI's attempts to stop the last two mega-churches on 'the list' from getting robbed. Cover price $3.99. 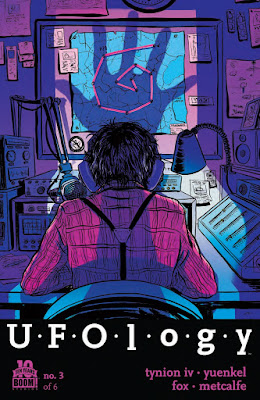 Written by James Tynion IV and Noah J Yuenkel. Art and Cover by Matt Fox. Becky is determined to be normal, but her scar is glowing and she keeps saying strange things, and Malcolm is doggedly trying to get her to work with him on solving this mystery. She doesn't want to be special, but she doesn't seem to have any choice. Cover price $3.99. 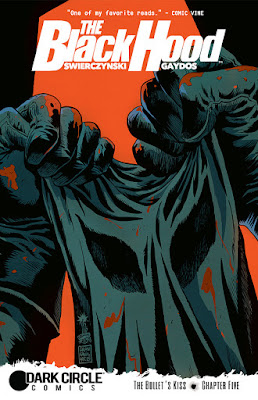 Written by Duane Swierczynski. Art by Michael Gaydos & Various. Cover by Francesco Francavilla. 'Bullet's Kiss,' Part 5. The Black Hood finally corners the mysterious 'Connection' on the abandoned seventh floor of City Hall. No cops, no witness-just the two of them, ready to throw down. But when the Connection finally reveals his identity, Greg realizes the game was rigged from the beginning. And it's going to take all of the Black Hood's strength to walk out of this building alive! Cover price $3.99. 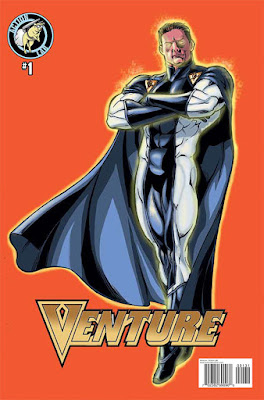 Written by Jay Faerber. Art and Cover by Jamal Igle. Down-on-his-luck reporter Reggie Baxter has stumbled onto one of the greatest secrets of all time…superpowered high school history teacher Joe Campbell! But who is Joe Campbell and more importantly, how rich will Reggie become by blackmailing him? Cover price $3.99. 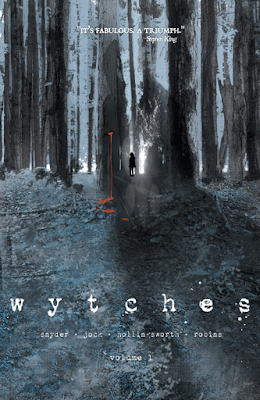 Volume 1 - 1st printing. Collects Wytches (2014 Image) #1-6. Written by Scott Snyder. Art and cover by Jock. SPECIAL LOW INTRODUCTORY PRICE! When the Rooks family moves to the remote town of Litchfield, NH to escape a haunting trauma, they're hopeful about starting over. But something evil is waiting for them in the woods just beyond town. Watching from the trees. Ancient...and hungry. Softcover, 144 pages, full color. Cover price $9.99.