This week San Diego Comic-Con will take over our lives whether or not you're there physically. We'll be awaiting all the latest comic book, movie, television, toys and other news to come out of the world renowned pop culture event. Meanwhile, there are a ton of new and notable comic books to read while you're in line for two days to enter Hall H. Check out this week's great line-up of titles from the new Archie to the controversial Batman run. 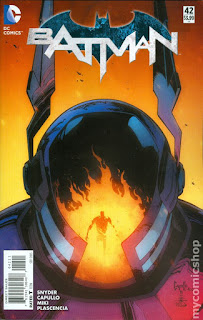 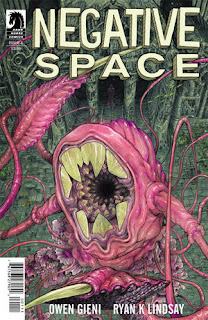 Written by Ryan Lindsay. Art and Cover by Owen Gieni. When one man's writer's block gets in the way of his suicide note, he goes for a walk to clear his head and soon uncovers a century-old conspiracy dedicated to creating and mining the worst lows of human desperation. Cover price $3.99. 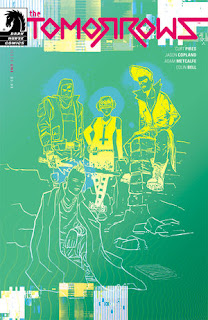 Written by Curt Pires. Art by Jason Copland. Cover by Jason Copland and Dylan Todd. They told you the counterculture was dead. They were wrong. Welcome to the new reality. A bold new speculative-fiction comic from the mind of writer Curt Pires, with each issue illustrated by a different brilliant artist! The future: Art is illegal. Everything everyone ever posted online has been weaponized against them. The reign of the Corporation is quickly becoming as absolute as it is brutal-unless the Tomorrows can stop it. Cover price $3.99. 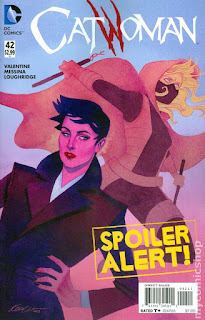 Written by Genevieve Valentine. Art by David Messina. Cover by Kevin Wada. Everything Selina Kyle accomplished as both crime boss and Catwoman is about to be ruined when Stephanie Brown makes a guest appearance! Cover price $2.99. 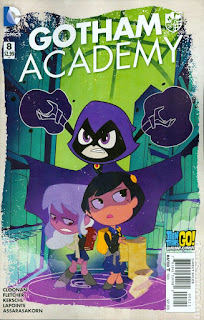 Teen Titans Go Variant Edition by Sean Cheeks Galloway. Written by Becky Cloonan and Brendan Fletcher. Art by Mingjue Helen Chen. Classes are suspended for a funeral. So, is it really true that grieving students get all A's? Cover price $2.99. 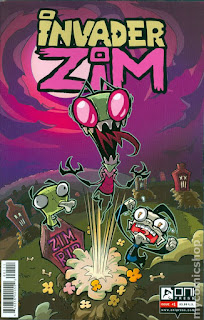 Written by Jhonen Vasquez. Art by Aaron Alexovich & Megan Lawton, with Simon Troussellier. (CA) Aaron Alexovich ZIM and his filthy evil ways have been gone for what feels like years. But Dib KNOWS the alien menace will rear his head again, and he won't leave the house, or his 900 security monitors, until it happens. And it WILL happen. Oh, it WILL. Cover price $3.99. 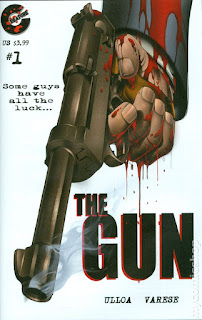 Written by John Ulloa. Art and Cover by Jose Varese. The Gun is a series that revolves around the effect that a mysterious handgun, forged almost a century ago, has on the lives of the people who briefly possess it, as it passes from hand to hand. The first issue is the story of a middle-aged struggling writer who, at the end of his rope, gets a new lease on life when he purchases a gun at a pawnshop. His life is suddenly worth living again, until it's not. Cover price $3.99. 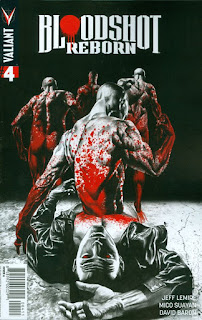 Written by Jeff Lemire. Art by Mico Suayan and Jeff Lemire. Cover by Mico Suayan. New York Times best-selling writer Jeff Lemire (THE VALIANT, Descender) and rising superstar Mico Suayan (Moon Knight) bring the synapse-shattering first act of Bloodshot's return to a knock-out conclusion! With each nanite-infected killer Bloodshot confronts, he loses more of his humanity, but with killers wreaking havoc across Colorado, does he have a choice? Meanwhile, the mysterious figure called Magic makes a move to restore Ray Garrison's soul - but can he let go of the demons of his past? Does he even want to? Cover price $3.99. 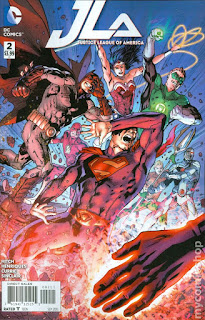 Power and Glory: Part 2 - Written by Bryan Hitch. Art by Bryan Hitch and Wade Von Grawbadger. Cover by Bryan Hitch. The JLA learns more about the armada of religious zealots that has arrived on Earth - and their stunning ties to Krypton! Cover price $3.99. 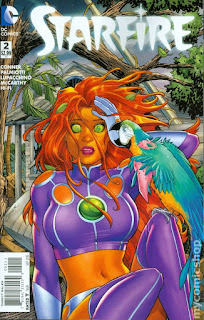 Written by Amanda Conner and Jimmy Palmiotti. Art by Emanuela Lupacchino. Cover by Amanda Conner. Florida is so nice this time of year…the warm weather…the beach…and Starfire beating the crud out of the bad guys! You should really try to get down there and see for yourself. Cover price $2.99. 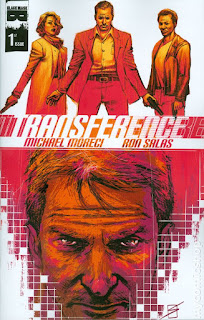 Written by Michael Moreci. Art and Cover by Ron Salas. Colton Moss and his elite team of special agents run counter-terrorism operations utilizing a secret form of time travel technology called 'transference,' which enables them to send their consciousnesses back in time - but, when Colton's past is altered to reshape his life in the present, he discovers this technology isn't as exclusive as he thought. Now Colton must prevent a large-scale insurgency in the U.S. - and do so in the transference-past, where a terrorist's consciousness could be in any body, so everybody is a potential suspect. Cover price $3.99. 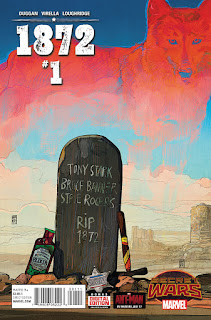 Secret Wars: Warzones - Written by Gerry Duggan. Art by Nicole Virella. Cover by Alex Maleev. REAL HEROES DIE WITH THEIR BOOTS ON. SHERIFF STEVE ROGERS faces corruption and fear in the boom town of TIMELY. The only thing ANTHONY STARK seems capable of is pulling a cork, so can he pull Rogers' fat from the fire? But...a stranger comes to town that will change Timely forever...for anyone left standing, that is. Rated T+ Cover price $3.99. 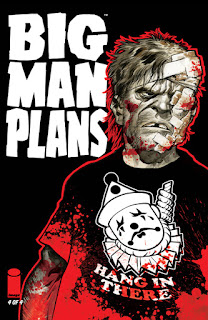 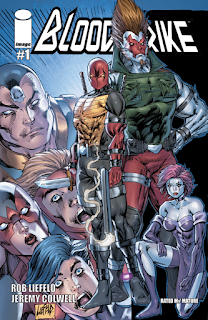 Story, Art and Cover by Rob Liefeld. A new recruit to the Bloodstrike program, (his identity as a mystery man from the historical Extreme Universe soon to be revealed!) struggles on a covert mission and loses his life as well as his junk to the mysterious TRAGEDY ANN! Cover price $3.99. 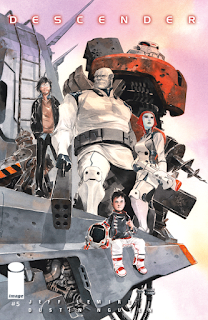 Written by Jeff Lemire. Art and Cover by Dustin Nguyen. Quon reveals a shocking secret that will change the course of Tim-21's life! Cover price $2.99. 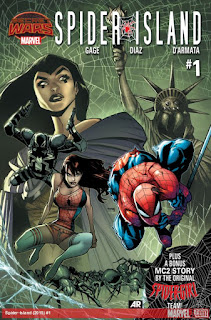 Written by Christos N. Gage and Tom DeFalco. Art by Paco Diaz and Ron Frenz. Cover by Humberto Ramos. The Spider-Queen has turned Manhattan into an island of Spider-Madness and Peter Parker has lost. With Spider-Man defeated and captive, does Flash Thompson, A.K.A. VENOM stand a chance? All this, plus visit the MC2 patch of BATTLEWORLD! Mayday Parker and her Spider-Family are back! Rated T Cover price $4.99. 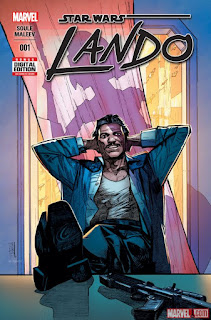 Written by Charles Soule. Art by Alex Maleev. You know him...you love him...now, join him for his biggest caper as master of charm Lando Calrissian gets his very own comic book! Before he joined the rebellion, before he ran Cloud City, Lando made his way in the galaxy getting by on some swindles, some swagger, and a smile. Lobot at his side, Lando has a plan to steal a very valuable ship...but has he bitten off more than he can chew? Rated T Star Wars Lucasfilm Ltd. & TM. All rights reserved. Used under authorization. Text and illustrations for Star Wars are 2015 Lucasfilm Ltd. Cover price $3.99. 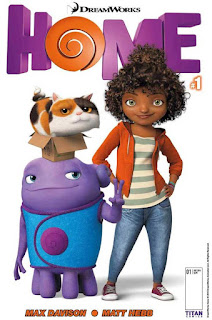 Written by Max Davison. Art by Matt Hebb. Fresh from DreamWorks Animation's new film Home, Titan Comics bring you the all-new adventures of the friendliest and most inept world dominators you've ever seen! The Boov are an alien race trying to make Earth their home, but they really don't get human culture! Cover price $3.99. 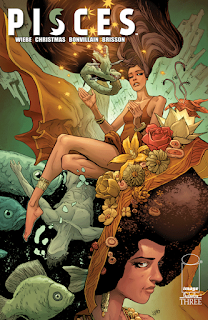 Written by Kurtis J. Wiebe. Art and Cover by Johnnie Christmas. With a new start in Houston, Texas, Dillon begins to find a semblance of a normal life. But even with a beautiful new home to stay in and the pleasant company of an old friend, Dillon begins to show signs of decay. There's a sickness corroding his very flesh. And his mind. Cover price $3.99. 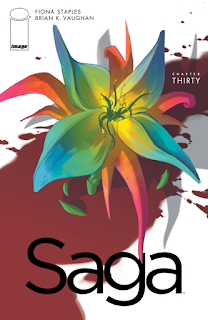 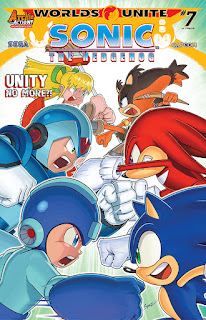 Worlds Unite Act II: Part 7 - Written by Ian Flynn. Art by Edwin Huang and Gary Martin. Cover by Patrick Spaz Spaziante. The heroes of the Sonic/Mega Man crossover event, at war?! 'Worlds Unite,' Part Seven: The unified army is not so unified anymore! What has driven Mega Man, X, and their robot companions to attack Sonic and the Freedom Fighters? Drs. Eggman and Wily may have the answer! Or a weapon. Could a weapon be the answer? Or is it more trademark treachery? Meanwhile, Sigma grows in power, preparing for the next phase of his master plan! Story continues in Mega Man #51! Cover price $3.99. 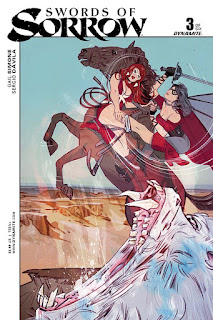 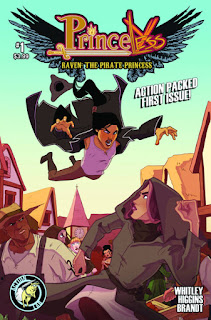 Written by Jeremy Whitley. Art and Cover by Rosy Higgins and Ted Brandt. Spinning right out of the pages of Princeless, it's the ongoing adventures of Raven Xingtao, The Pirate Princess. Raven if ready to set off on a quest for revenge against her brothers who have stolen her inheritance. Cover price $3.99. 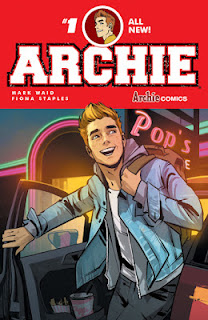 Written by Mark Waid. Art and Cover by Fiona Staples. Change is coming to Riverdale in this can't-miss kick-off to Archie's new ongoing series! Familiar faces return in new and unexpected ways in this must-have #1 issue! As the new school year approaches, you'd think Archie Andrews would be looking forward to classes and fun-but nothing is as it seems in the little town of Riverdale. But is this a one-off or a sign of bigger changes awaiting for America's favorite teens - and the entire town? Find out in this exciting and remarkable first issue! Cover price $3.99. 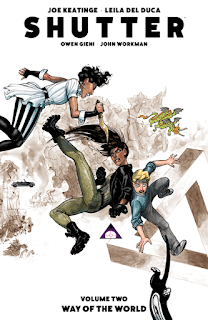 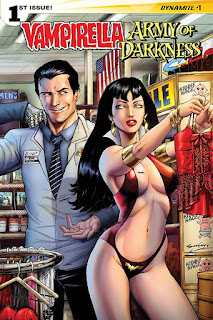 Written by Mark Rahner. Art by Jethro Morales. Cover by Tim Seeley. During his time trapped in the England of 1300 A.D., Ash listened to the terrified primitive screwheads tell of a horrific flying Deadite similar to the one he blasted out of the air when he arrived - but much deadlier. At the same time, a raven-haired temptress wants to give him some sugar - as his last meal! The horror mash-up you've been waiting for, from Mark Rahner (Twilight Zone, Army of Darkness/Reanimator) and Jethro Morales (Hack/Slash)… full of bloody chainsaws, fanged vixens, demon possessions, and boomsticks aplenty! Cover price $3.99. 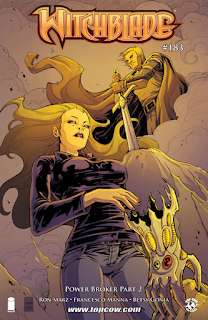 Written by Ron Marz. Art and Cover by Laura Braga. Revelations abound as Sara Pezzini confronts her mysterious assailants, learning not only their true nature, but also the shocking truth of the power they serve. Have Sara and the Witchblade merely been pawns all this time? And will the fallout push her back to New York City, the one place she swore she'd never return? Cover price $3.99.