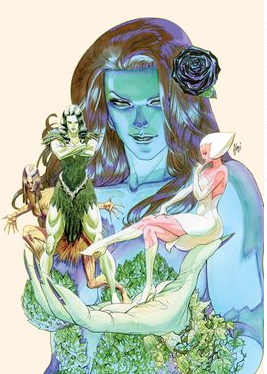 DC Comics is bringing some old favorites and their creators for limited series runs in 2016 including Swamp Thing by Len Wein, Metal Men by Len Wein, Raven by Marv Wolfman, Firestorm by Gerry Conway, Katana: Cult of the Kobra by Mike W. Barr, Metamorpho by Aaron Lopresti, and Sugar & Spike by Keith Giffen. Another title has fans excited as their pleas for a solo book have been answered. Poison Ivy: Cycle of Life and Death by Amy Chu will give the beloved Batman rogue her due.


The six-issue miniseries promises to take Poison Ivy in "a really new direction," Editor-in-Chief Bob Harras says, "and it's a fun twist on her character and where she's going to go."

Chu finds Poison Ivy "a fascinatingly complicated character with an incredible fan base," she says. "We know her, but we don't really know her. There's so much opportunity to build her world without the burden of continuity. And let's face it, writing villains is more fun."

Taking a big role in the DCU is also a very personal challenge for Chu. "My grandfather was a doctor in Hong Kong back in the '50s, and apparently he was a huge DC fan," the writer adds. "For years, he would have comics shipped to his office from the U.S. So for me to be writing comics today, and especially DC comics, is some kind of crazy karma."

The #PoisonIvyLeague should be very pleased. The plan from DC is if some of these minis do well we could be seeing more of them on a long term basis.