REVIEW: 'The Humans' #6 by Keenan Keller and Tom Neely 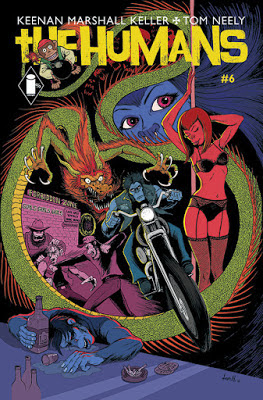 The Humans #6 is the latest issue in one of comic books' best crime dramas. Yes, the world is populated by apes and actual humans, not the titular biker gang, are little more than pets. Yet, Keenan Keller and Tom Neely have created an adult comic with all the intrigue, violence and sex of your favorite cable show.


The gang celebrates a successful drug run from Oakland to Los Angeles (from the action-packed issue #5) despite the attempted hijacking from a rival crew. Bobby and The Humans rejoice in L.A. but Johnny has his heart set on looking for an old flame, Peggy, back home in Bakersfield.

Johnny is determined to reconnect with Peg no matter how long he has to wait drinking at the strip club she works at. That's commitment. Johnny is a patient man, but he's also a Vietnam War vet with PTSD and he keeps throwing them back and back and back. What could go wrong?

Meanwhile, Bobby is glowing after The Humans conquered the road to L.A. and can't wait to get his own drug, spazm, on the street. Going on his own could rattle Abe's cage when he finds out he's not the only game in town anymore. If that wasn't bad enough there's also a traitor in Bobby's ranks.

It's a testament to the creators' vision that the book feels, looks and sounds like the kind of biker flick you used to be able to watch late at night on a local TV channel where there was no clear-cut hero. Forget about anti-heroes, these guys are just bucking the system and surviving and their story isn't always pretty.

The Humans gives readers a peek into a world that might seem familiar but is, in fact, messier, nastier, and more shocking than you're used to. It makes for a hell of a read.