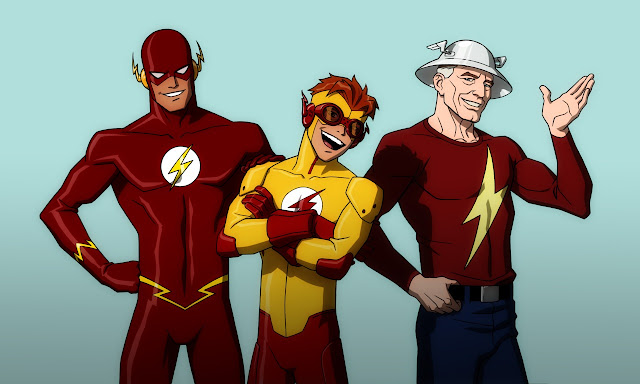 If the sight of Jay Garrick's helmet appearing during The Flash's season 1 finale got you excited then the news coming out of Comic-Con should make you really ecstatic. During the Warner Bros Television panel, it was revealed that Garrick's role had been cast and a few more additions will be part of season 2 including the "big bad."

The teaser trailer (see below) shown at Comic-Con mostly recaps the triumphant first season of The CW's ratings juggernaut, The Flash, with only some voiceovers previewing the season 2. One voice belongs to Garrick as played by Teddy Sears (Masters of Sex). He's warning Barry and company of an impending threat.

THE FLASH made waves at Comic Con 2015 when it revealed Zoom as the season two “big bad” during the show’s panel session in Hall H on Saturday, July 11, 2015. The show’s fast-paced highlight reel also served up an exciting recap of all the season one action, just in time to get fans ready for season two, which debuts Tuesday, October 6, at 8/7c on The CW. #WBSDCC

Also cast is  Shantel VanSantel (The Messengers)who'll play Patti Spivot, Joe West's new partner after Eddie Thawne sacrificed himself during the season 1 finale. In the comics, she's obsessed with metahumans and could serve as a new love interest and ally to Barry.

Two more major characters joining the series are Wally West and Professor Zoom. No word on casting yet but these are characters longtime fans of The Flash have been clamouring to see. Zoom will be season two's major villain. Considering the showrunners' fan-friendly approach of including heroes and villains, even crossover events, from the comics season two promises to be another epic adventure.