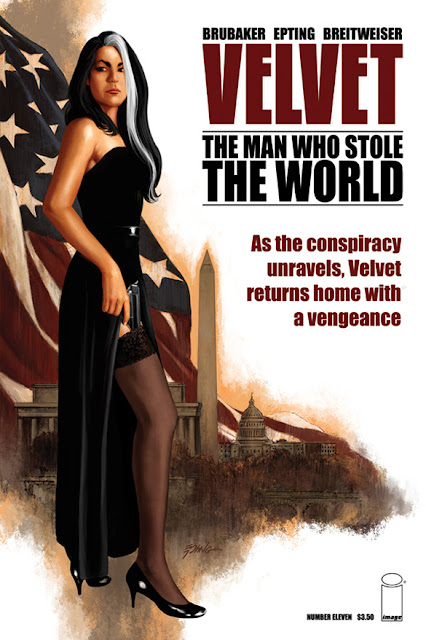 The spy genre is as popular as ever. You just have to look at your local cineplex this year alone and see how enduring spy tales still are. Mission Impossible: Rogue Nation is the latest instalment of the long-running series that was based on a television show. The Man from U.N.C.L.E. is another television show turned big screen adaptation. The grandaddy of them all sets James Bond on another moody and dark mission later this year in SPECTRE. And there's still comedies like Spy and American Ultra that put a funny spin on cloak and dagger adventures. Skeptics talk about a mythical superhero movie fatigue yet spy movies are just as prevalent with nary a word.


The best spy tale being spun right now doesn't take place on television or in a movie theater, it's happening between the pages of ink and paper of Velvet from Image Comics. Writer Ed Brubaker and artists Steve Epting and Elizabeth Breitweiser are in a groove with the latest issue, #11, as a new arc begins.

Velvet Templeton comes out of hiding to continue her investigation into who set her up and killed her colleagues. The clues begin to dry up in Europe leading her to believe the answers could be found in the United States. She gets reacquainted with an old friend and slyly sets her plan in motion to hop the Atlantic without getting caught.

Brubaker and company have hit their stride in telling a consistently compelling spy thriller with twists and turns that you'd expect from the genre. But the execution is effortless and nearly flawless. Even when tropes appear, as is typical within the genre, Brubaker infuses the story with a new wrinkle. The biggest asset is Velvet herself. She's not just a "strong female character" she's smart, deadly and decisive. She's always in control whether she's conning a connected accountant or using sex to meet her needs, Velvet is James Bond sans the male privilege. She has to use her underestimated status as a woman of the 60's to her advantage.

Epting and Breitweiser dip every page in a murky pit of atmosphere and noirish decadence. Epting cleverly angles the perspective looking up at Velvet in certain panels reminding us that she commands respect and should be looked up to. She's nobody's fool. Epting's character design of Velvet makes her more believable because she's attractive but not in a cheap way. Shadows permeate every scene but are delicately balanced with Breitweiser's use of tempered colors.

Velvet is Brubaker and Epting at their best. Fans of their work wouldn't expect anything else. They deliver to bring another thriller to life that's smart, sexy and engaging. The new arc is off to a great start and one that shouldn't be missed.
Email Post
Labels: comic books Ed Brubaker image comics reviews Steve Epting Velvet