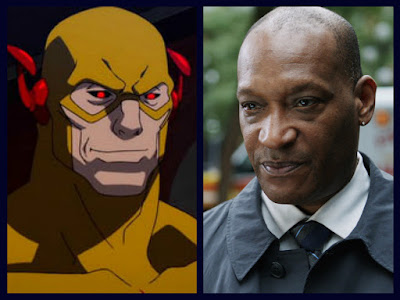 Tony Todd (Candyman) has been cast as the voice of the villain, Zoom, for season two of 'The Flash.' He'll be wreaking havoc in Central City beginning with episode two "Flash of Two Worlds."

Variety had the exclusive on the casting and spoke with executive producer Andrew Kreisberg about the difference having Zoom as season two's big baddie.


“Last year, with the Reverse-Flash, we just modulated Tom Cavanagh’s voice, and this year we wanted to do something a little bit different,” executive producer Andrew Kreisberg tells Variety. “Part of the mystery of the season is who or what is underneath the Zoom outfit, and so we wanted to do something like James Earl Jones as Darth Vader — this iconic voice coming out of this mask. Last year, we thought of the Reverse-Flash as a speed warrior; this year, Zoom is like a speed demon, and no one does demon-voice better than Tony Todd.”


Besides being the titular character in the cult classic horror film Candyman and a list of credits, Todd has lent his voice to DC Comics characters in video games and animation like LEGO DC Comics Superheroes, Young Justice, and Batman: The Brave and the Bold.