'Vixen' Featurette Shows Off New Footage and Goes Behind the Scenes 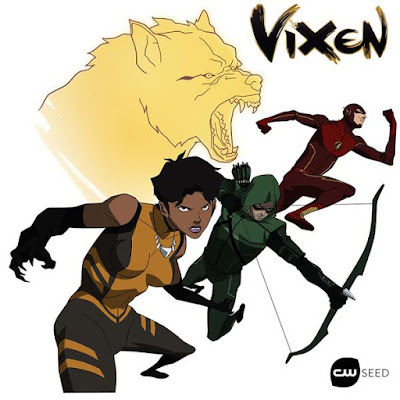 "This is our first opportunity to do a superhero and a woman, and also of color, so we're really excited about that," says executive producer and story editor Marc Guggenheim (Arrow). "It's also a chance to do a character whose powers are based in mysticism." These are some of the reasons the new digital animated series 'Vixen' is so highly anticipated. Premiering on the CW's web channel CW Seed on August 25, the show is also in the same continuity of live-action shows 'Arrow' and 'The Flash.'
Along with Guggenheim, producer/director James Tucker, lead character designer Phil Bourassa and SVP, Creative Affairs for WB Animation Peter Girardi provide some insight on where Vixen fits in the 'Arrowverse,' what advantages animation gives the storytelling and what she's trying to overcome in the series. Guggenheim calls 'Vixen' essentially their "fourth show."


The real treat of course is all the never-before-seen footage of Vixen in action and the appearances of Arrow and The Flash.  Megalyn Echikunwoke provides the voice of Vixen/Mari McCabe with Stephen Amell (Arrow/Oliver Queen), Grant Gustin (The Flash/Barry Allen),Emily Bett Rickards (Felicity) and Carlos Valdes (Cisco) reprising their live-action roles by voicing their animated counterparts.

'Vixen' is scheduled to debut Aug. 25 on CWSeed.com and the CW Seed app.