The beauty of new comic book day is that while you can pick up sure bets like Batman #44, the Saga TPB, or Ms. Marvel #18 there's plenty of creative new stories waiting to be discovered. Titles like Bitch Planet #5, Gotham Academy #10, Swords of Sorrow #5 represent unique voices in comics. Take a chance on new books with talented and passionate creators. Holy F*cked #1, Virgil graphic novel, Tet #1, Moon Streak #1, Broken Moon #1 and Gravedigger #2 are some of this week's fresh new offerings. Check them out. 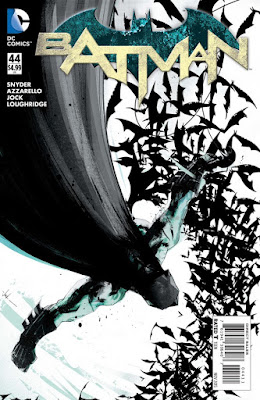 Superheavy: Part 4 - Written by Scott Snyder. Art and Cover by Jock. It's the origin of new villain Mr. Bloom! In a tale from Bruce Wayne's past, Batman must investigate a vicious crime in the shadowy area of Gotham City known as the Narrows. Cover price $4.99. 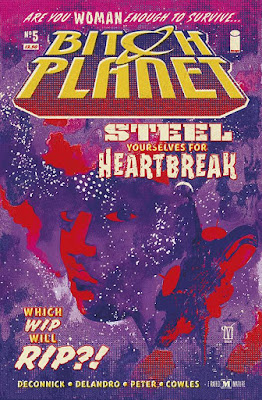 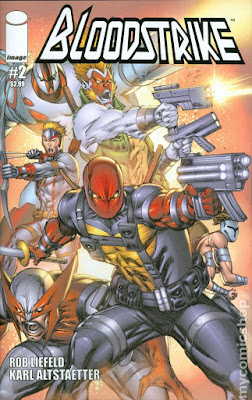 Story, Art and Cover by Rob Liefeld. All guns and ammo are pointed at Brigade as Bloodstrike fights to destroy Battlestone's trans-dimensional network! Cover price $2.99. 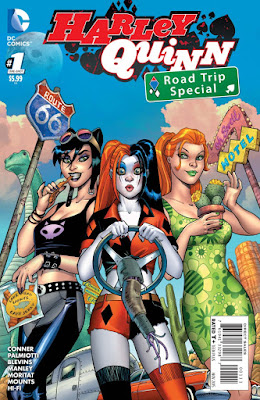 Written by Amanda Conner and Jimmy Palmiotti. Art by Bret Blevins. Cover by Amanda Conner. It's the great American summer tradition, but you've never seen a road trip quite like this before! Harley, Ivy, and Catwoman are burning rubber across the U.S. of A! We recommend you all stay off the roads for the month of August, just to be safe. Cover price $5.99. 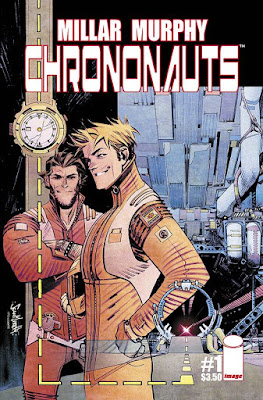 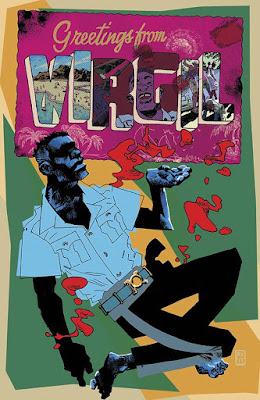 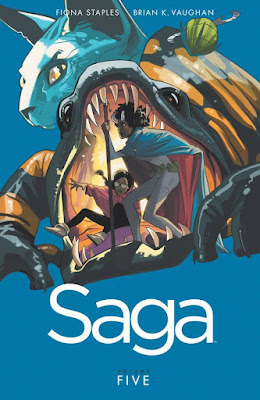 Volume 5 - 1st printing. Collects Saga (2012 Image) #25-30. Written by Brian K. Vaughan. Art and Cover by Fiona Staples. While Gwendolyn and Lying Cat risk everything to find a cure for The Will, Marko makes an uneasy alliance with Prince Robot IV to find their missing children, who are trapped on a strange world with terrifying new enemies. Softcover, 152 pages, full color. Cover price $14.99. 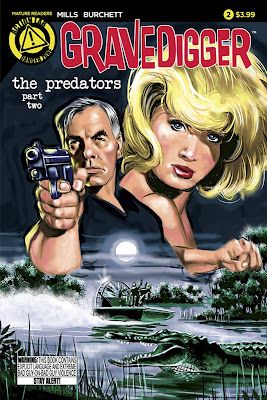 Written by Christopher Mills. Art and Cover by Rick Burchett. On the run from the mob and the police, 'Gravedigger' McCrae finds temporary respite with a lovely, wealthy playgirl. But it doesn't take long for his pursuers to catch up with him, and then it's no longer a matter of outrunning them, but escape from certain death. Can Digger outwit his adversaries in the savage conclusion to 'The Predators?' Cover price $3.99. 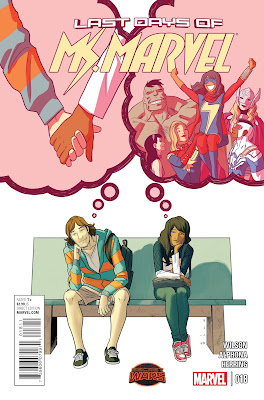 Written by C. Willow Wilson. Art by Adrian Alphona. Cover by Kris Anka. Between teaming up with her personal hero to rescue her brother and trying to keep her city from falling into an all-out frenzy, Kamala has barely had time to come to terms with the fact that the world is literally collapsing around her. Cover price $2.99. 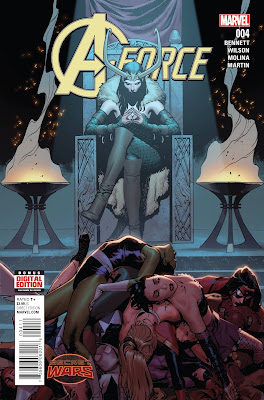 Written by C. Willow Wilson and Marguerite Bennett. Art and Cover by Jorge Molina. With the fate of Arcadia hanging in the balance, a traitor in A-FORCE's ranks is revealed! But why would she sell out her teammates? Rated T+ Cover price $3.99. 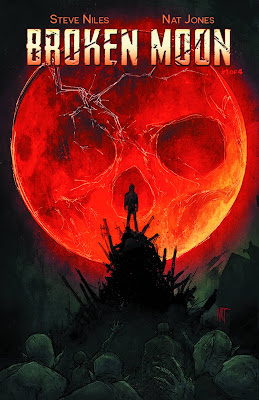 Written by Steve Niles. Art and Cover by Nat Jones. When explosions on the moon rock the surface of the Earth, humans are all but wiped out - allowing monsters of legend to rise and take control of civilization. Vampires, with their polluted cities and human factory-farming, have thus far come out on top - but if the werewolves have anything to say about it, the vampires' reign won't last for long… Cover price $3.99. 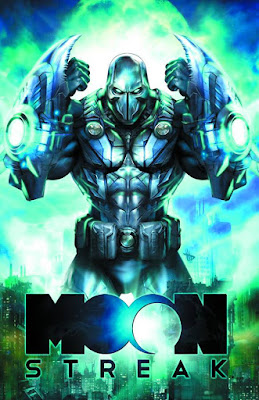 Written by Austin Rogers and Wes Hartman. Art by Harvey Taliboa and Wes Hartman. Cover by Dave Wilkins & Various. A morbid young girl, Veronica, documents the dead and dying of the dark sci-fi metropolis Hope City. With a #scienceexperiment on the run, she sets her sight on cutting a bloody shortcut to the top and a take the 'cake' from the Villains that have a choke hold on the city. Cover price $3.99. 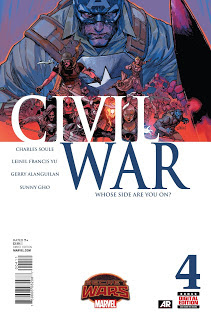 Written by Charles Soule. Art and Cover by Leinil Francis Yu. Tony Stark comes face-to-face with his true enemy, while General Rogers commences a massive military effort to end the Civil War once and for all. Rated T+ Cover price $3.99. 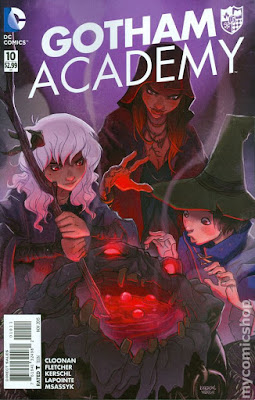 Written by Becky Cloonan and Brendan Fletcher. Art and Cover by Karl Kerschl. 'Bubble, bubble, toil and trouble!' To investigate a suspicious student, Olive and the gang join the school production of Macbeth! But is the play haunted? Cover price $2.99. 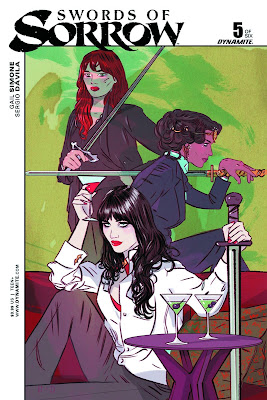 Written by Gail Simone. Art by Sergio Fernandez Davila. Cover by Tula Lotay. As the epic era-spanning tale rockets towards conclusion, reluctant heroines find themselves facing terrifying alternate versions of themselves on the road to the ultimate showdown with the Prince of All Worlds. Can even the combined forces of Kato, Red Sonja, Dejah Thoris, Vampirella, Jungle Girl, Lady Zorro and dozens more save reality? Join us for the penultimate chapter in what critics are calling the best crossover event of the summer! Cover price $3.99. 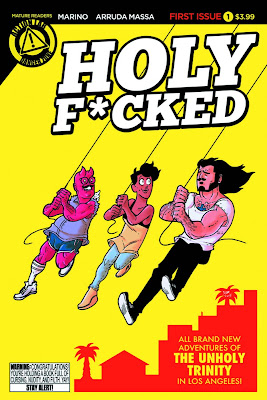 (W) Nick Marino (A/CA) Daniel Arruda Massa
After recklessly killing tons of gods in HOLY F*CK, Jesus is back, again, and chilling with Satan in domestic bliss. And their best bud, Sister Maria, is managing a local homeless shelter. Sounds great, right? Not for Hercules! The "Muscles from Mt. Olympus" is pissed and he wants revenge. Plus... what shocking news does Satan have for his macho messiah?

The all new first issue from the sequel to the popular series comes with a limited to 1,500 copies Halloween themed variant cover. 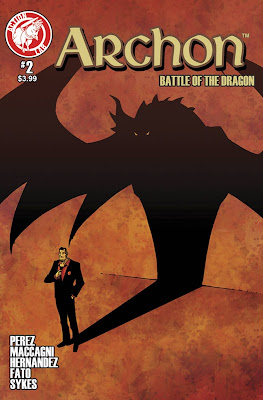 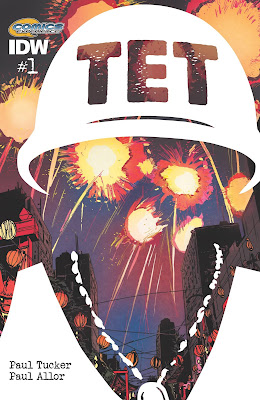 Written by Paul Allor. Art and Cover by Paul Tucker. Eugene Smith is desperate to leave Vietnam behind, and begin a new life with the woman he loves. But when a fellow Marine is brutally murdered, Eugene's plans are thrown away, forever. All's fair in love and war, right? An extraordinary, heartfelt story of hard-boiled crime and star-crossed romance, set at the height of the Vietnam War and the decades that followed. Cover price $3.99. 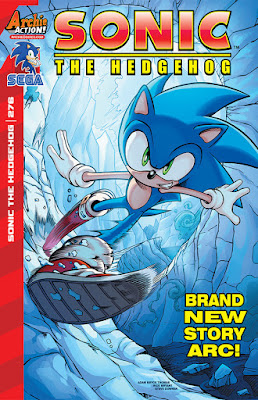 Written by Ian Flynn. Art and Cover by Adam Bryce. Thomas The Blue Blur is back from the events of 'Worlds Unite' and ready to save the world! In 'Cold Hearted,' Sonic embarks on a quest through the Arctic to find and recover the all-important Gaia Keys! Collecting them all is essential for fixing the shattered world. It's a pretty chill mission until Egg Boss Tundra steps in to put the freeze on Sonic's plans! Meanwhile, Dr. Eggman is 'Back in Business' as he braves the unknown to find his most treasured killing machine Metal Sonic! Cover price $3.99. 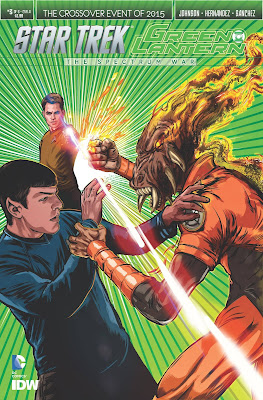 Written by Mike Johnson. Art by Angel Hernandez. Cover by Tony Shasteen. The galaxy explodes in a Lantern-fueled war between the Federation and its enemies! Captain Kirk and the ring-bearing crew of the Enterprise must join forces with Hal Jordan to prevent the loss of entire civilizations... as the identity of the villain behind it all is revealed! Cover price $3.99. 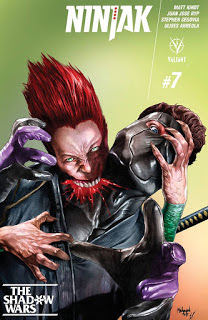 Written by Matt Kindt. Art by Juan Jose Ryp and Butch Guice. Cover by Mico Suayan. Sanguine shatters 'THE SHADOW WARS'! Ninjak goes head-to-head with the Shadow Seven's toughest villain, Sanguine - but will his past come back to bite him before she does? As a conspiracy from Colin King's first days as a spy finally comes to light in the modern day, will Ninjak survive his deadliest battle yet? And what will be left of him? Red-hot artist Juan José Ryp (Black Summer) joins Matt Kindt for the second 40-page chapter of THE SHADOW WARS! Plus: an all-new installment of NINJAK: THE LOST FILES, featuring artwork by Eisner Award-nominated artist Butch Guice! Cover price $3.99.