This week's comic book releases feature a lot of amazing female characters. Black Widow Vol. 3, Princeless Be Yourself #4, Batgirl #44, Betty & Veronica Halloween Annual, and Red Sonja #18 to name a few of this week's incredible women. Let's not forget some of the women creating some of these fabulous stories and more; Gail Simone, Kate Leth, Babs Tarr, Nicole Virella, and Emily Martin. Take a look at this week's notable new releases.

Check out this week's comic book slideshow featuring music by the band Haim with "Don't Save Me." 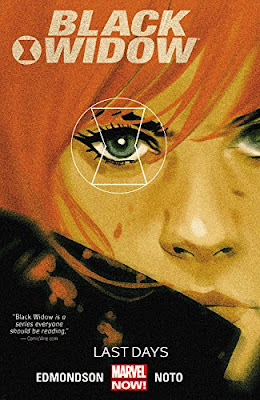 Volume 3 - 1st printing. "Last Days!" Collects Black Widow (2014 6th Series) #13-20. Written by Nathan Edmondson. Art by Phil Noto. The world has turned against Black Widow. Her web is broken. It's all been worth it, though, because the path to Chaos is finally at her feet. But can Natasha still turn to the Avengers or S.H.I.E.L.D.? And how far can she travel her brutal road to the answers she needs, while still calling herself a hero? As Chaos looms, an enemy resurfaces with a surprising agenda, and Natasha gets an offer she can't refuse. This is it: Black Widow goes head-to-head with Chaos at long last! Then, at the end of all things, Black Widow finds herself unexpectedly connected to one of the darkest moments of her past. See how the first lines of red in her ledger were written. Will Natasha fall into darkness? Is it too late for redemption? Softcover, 168 pages, full color. Cover price $24.99. 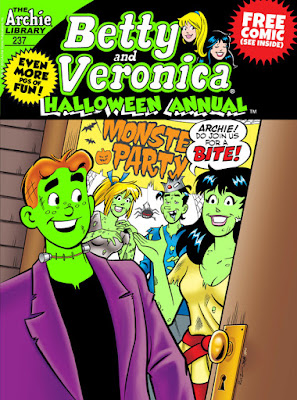 Story and Art by Dan Parent. Cover by Fernando Ruiz & Various. Archie has received notice that he's been entered in a 'Best Boyfriend of the Year' contest. This may seem like a great thing for Riverdale's resident Romeo, but there's one problem: he's been entered by eight different girls - including Betty and Veronica! And here's the real kicker - every girl is aware of every other girl's involvement in this contest! Meet each one of Archie's dates one by one in the part one of this 10-part series, 'The Many Loves of Archie Andrews'! And that's only the beginning of a fun-filled comics double digest! Cover price $5.99. 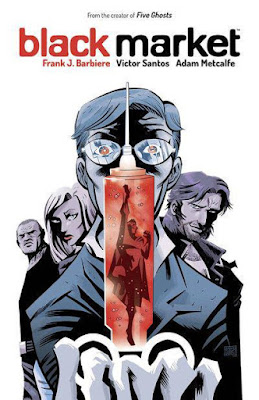 1st printing. Collects Black Market (2014 Boom) #1-4. Written by Frank J. Barbiere. Art and cover by Victor Santos. What's to Love: Here at BOOM!, we've never shied away from exploring the dark crevices of the superhero genre. Black Market mixes the visceral noir/pulp sensibilities of Frank J. Barbiere's Five Ghosts and Victor Santos' Filthy Rich with a truly modern take on superhero mythos. If you love Ed Brubaker and Sean Phillips' work on Sleeper like we do, this series is for you. What It Is: Ray Willis is a broken man, a disgraced medical examiner making ends meet by preparing corpses at a funeral parlor. His scientific genius is being wasted...that is, until his estranged criminal brother Denny shows up on his doorstep, supposedly cleaned-up and proposing a once-in-a-lifetime partnership to cure not just cancer, but all disease. The catch? It exists within the DNA of superheroes. Collects all four issues of the critically acclaimed miniseries. Softcover, 128 pages, full color. Cover price $19.99. 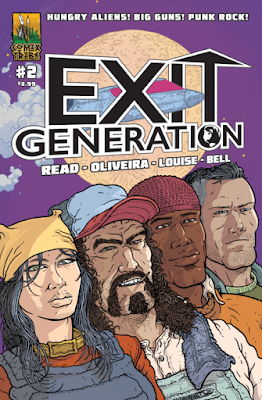 Written by Sam Read. Art by Caio Oliveira. Cover by Ramon Villalobos and Joe Mulvey. It's 2055. Ninety percent of the world's population have abandoned a resource-depleted Earth in search of a better home in the cosmos. Those left behind find themselves in an unexpected paradise - and Jack is bored out of his mind. He dreams of action inspired by 80's movies and punk rock. But when a legion of carnivorous aliens arrive, Jack learns you should be careful what you wish for! Exit Generation is a breakneck sci-fi adventure! Cover price $3.99. Written by Matt Hawkins. Art by Atilio Rojo. Cover by Stjepan Sejic. NEW STORY ARC The first issue of the second arc kicks off with a lot of people dying. Who lives, who dies? Does Aphrodite reluctantly force her vision on the survivors? Cover price $3.99. 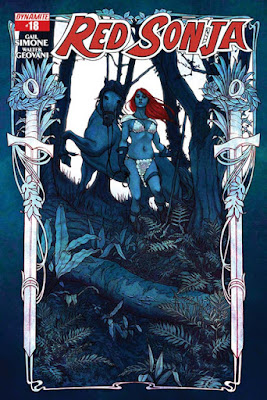 (W) Gail Simone (A) Walter Geovani (CA) Jenny Frison Gail Simone concludes her epic run on Red Sonja with the most heart-wrenching event in the life of our heroine! Face-to-face with the man she hates and distrusts most in the world, Red Sonja hears - for the first time ever - his side of the story. The last survivor of the craven murderers who wiped out her tribe finally comes clean at the end of Sonja's blade. But then... something wholly shocking and unexpected happens. Nothing will prepare you for what's to come, as Sonja's infamous blood rage comes to a boil! Cover price $3.99. 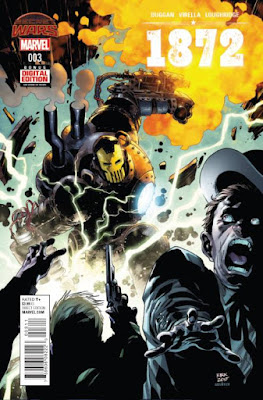 Written by Gerry Duggan. Art by Nicole Virella. Cover by Leonard Kirk. Fisk and his men are triumphant-but have they let their guard down? Just what concoction is timid Dr. Banner cooking up in his apothecary? You cannot miss the shocking last page as a hero is reborn. Rated T+ Cover price $3.99. 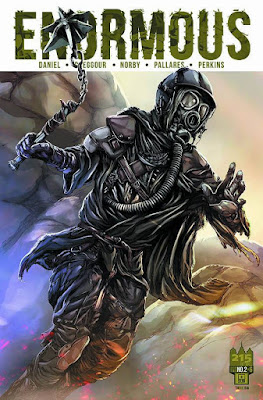 Written by Tim Daniel. Art and Cover by Mehdi Cheggour. The Sonoran desert has proven to be a death trap for Ellen and DJ as they scout for the location of an abandoned missile silo. They're close to finding shelter, but in a world dominated by giant monsters, man is still the most dangerous beast. Cover price $3.99. 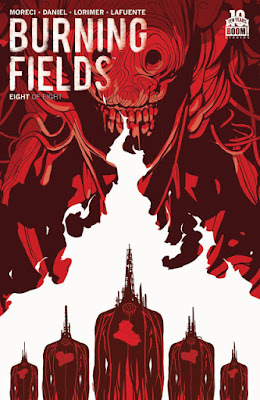 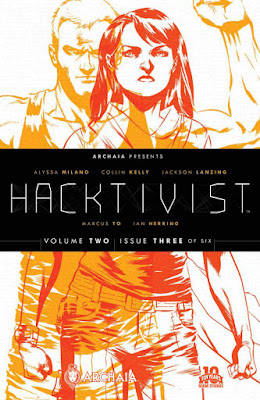 Written by Collin Kelly and Jackson Lanzing. Art and Cover by Marcus To. Nate and Ed might have found a way to stop the hackers who have killed so many, but the hackers are one step ahead. Cover price $3.99. 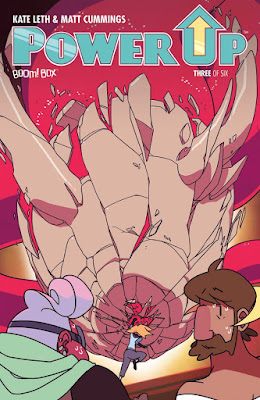 Written by Kate Leth. Art and Cover by Matt Cummings. The team gets together at Sandy's house to talk secret identities, cover stories, and costumes as they try and figure out what's going on! Cover price $3.99. 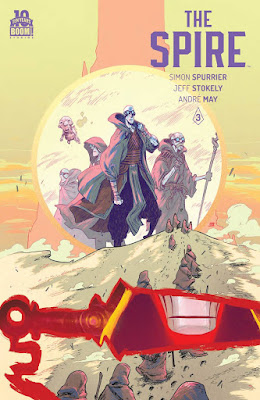 Written by Simon Spurrier. Art and Cover by Jeff Stokely. Past tensions between races resurface as Tithebound delegations arrive at the Spire to honor the new Baroness. Cover price $3.99. 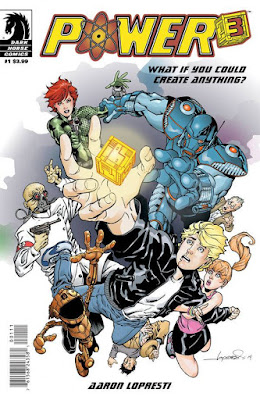 (W/A/CA) Aaron Lopresti What if you had a piece of technology that created anything you could possibly want, and all you had to do was imagine it? What would you wish for? For Kenny Logan, his first wish is to survive his eighteenth birthday! His unique matter-reinterpreting device has attracted the attention of a bumbling Nazi scientist with plans for world domination and an elite government agent who is hell bent on acquiring the device to stop an alien invasion at any cost. Aaron Lopresti delivers a comical coming-of-age tale in a fantastic sci-fi universe! Cover price $3.99. 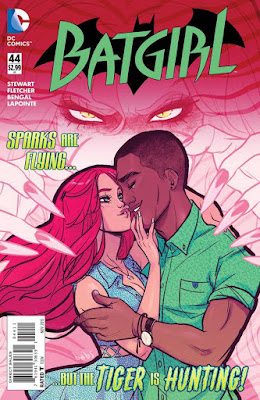 Written by Cameron Stewart and Brendan Fletcher. Art and cover by Babs Tarr. Velvet Tiger's got her claws around Luke Fox's throat-and only Batgirl can save him! Cover price $2.99. 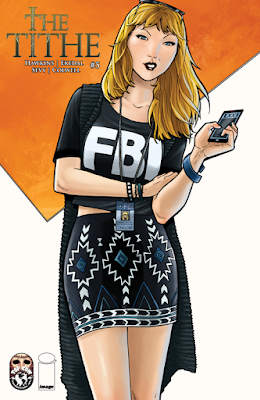 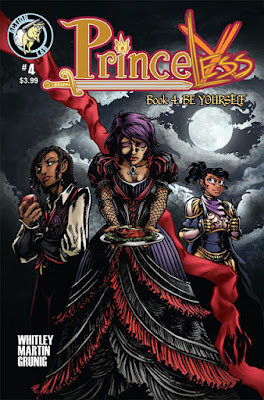 Written by Jeremy Whitley. Art and Cover by Emily Martin and Brett Grunig. This is it, the breathtaking conclusion of Be Yourself! Angoisse is divided between her loyalty to her sister and her love for one of the knights who are hunting her. Will Angoisse let him capture Adrienne and get Angoisse's hand in marriage as a reward or will she protect her sister's freedom. Also, Sparky and the Grimmorax settle their differences! Cover price $3.99. 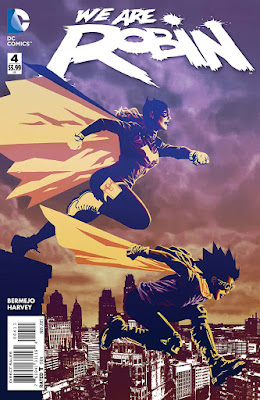 Written by Lee Bermejo. Art by Rob Haynes and Khary Randolph. Cover by Lee Bermejo. In the wake of a huge loss, the Robins are reeling with grief. Riko takes to the rooftops of Burnside to find a symbol of hope, and finds herself living out a dream as she teams up with her personal hero: Batgirl! Cover price $3.99. 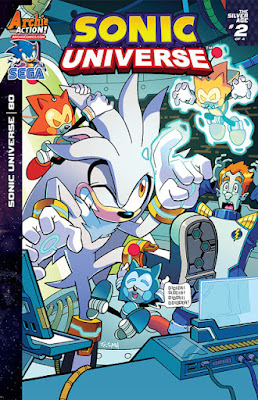 Written by Evan Stanley. Art by Jim Amash & Various. Cover by Tracy Yardley and Matt Herms. 'The Silver Age,' Part 2. The future is in danger, and only Silver the Hedgehog can make things right! Silver has teamed up with Prof. von Schlemmer and they have a plan for stopping the Genesis Portals! This seems like the solution everyone's been waiting for - but why doesn't the Council want to hear it? The mystery deepens as a voice calls out to Silver, a voice that only he can hear! Will our unlikely heroes uncover the conspiracy, or die trying? Cover price $3.99.