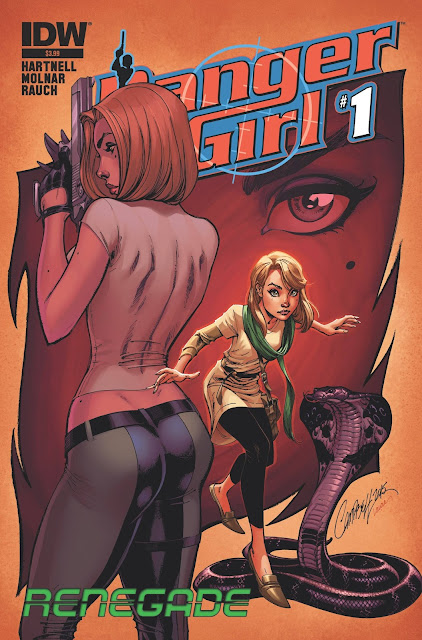 The 'Danger Girl' franchise has had a long history of parodying spy tropes with humor, sexy heroines and high octane action. It's not without it's faults - paperthin plotlines, overly sexualized female designs and little exposition. It's the 'Baywatch' of spy comics. It may not sound like a resounding endorsement but 'Danger Girl' doesn't pretend to be something it's not. There's no pretense it's about fun and adventure. Issue #1 of 'Danger Girl: Renegade' is that and so much more.


Co-creator/writer Andy Hartnell focuses this mini-series on Abbey Chase post-Danger Girl, the secret super spy group that's been disbanded. Her backstory that opens the issue is paced well and exciting. It covers her time in Cairo as a teenager evading kidnappers who would leverage her against her mysterious father. The threat follows her globally and the transition to present day is well executed and drops her in another dangerous situation.

The background on Abbey Chase, the brilliant young archeologist, helps add some dimensions to her that isn't seen enough making her way more interesting. It's a great primer for new readers and a refreshing look for long-time fans.

Artist Stephen Molnar comes from the school of co-creator J. Scott Campbell in his designs of women except with a lighter touch. Sure, Abbey and her pursuer Asia are attractive, mid-driff baring and right out of a Crossfit class, their features aren't exaggerated or sexualized. In fact, the 'Danger Girl' series has always had fantastic art, giving it a look unlike most comics.

John Rauch's colors bring so much richness and boldness to the story. The transitions from Cairo to Norway to the jungles of Ecuador each have a unique palettle all their own. It seems like a simple thing dirrentiating scenes with dedicated color schemes but it doesn't happen nearly enough. In some books, flashbacks, time jumps or varying locations get the same color treatment as the present day. It makes Rauch's work all the more remarkable.

'Danger Girl: Renegade' doesn't reinvent the adventure genre but does honor it with an exciting premise and engaging characters. It's familiar territory, a female version of 'Indiana Jones,' but so well executed and entertaining that it deserves to be read and enjoyed by all.