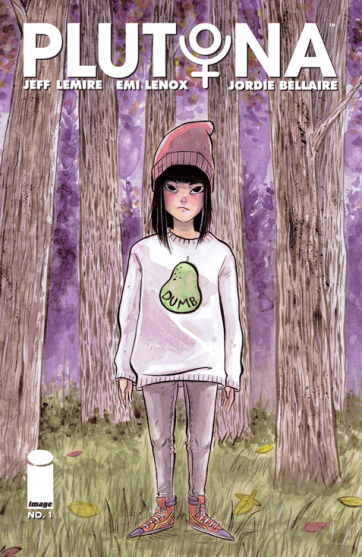 What could have been a derivative coming-of-age story between preteen misfits becomes a charming adventure in the hands of Jeff Lemire and Emi Lenox. 'Plutona' has all the makings of your typical group of angst-ridden kids who come together under extraordinary circumstances. Except Lemire infuses these archetypes with a pathos and depth as only he can.

The comparisons to stories like Stand by Me, Goonies and Super 8 set in the world of superheroes are inevitable, but this cast of familiar characters aren't as likable, at least not yet. There's bratty Mie who is super annoyed by her little video game-playing brother Mike. Lovable nerd Teddy is obsessed with superheroes so he chronicles their activity in a notebook. Diane, best friend of Mie, seems the nicest but doesn't let requisite bully Ray skate when he calls her "Chubs." They all represent the trappings of adolescence when you're at your most vulnerable, trying to find your way socially, intellectually and physically.

Lemire finds a way to add depth and emotion into what otherwise would be characterized as cliched underage Breakfast Club types. Ray for example is your run-of-the-mill bully from an abusive home who lashes out and insulates himself by being an asshole to everyone. Yet, in his posturing and aggrecious behavior he is transparent and the yearning he has to connect to someone rises to the surface. You can't help but feel sympathy for the jerk.

It's classic Lemire, taking simple characters that slowly and stealthly jab at your heart before falling in love with them. He's an emotive ninja. The introductions of this peculiar group of kids helps build-up the discovery of a dead superhero. It's the life-altering event that will bind them together. Stephen King did this in much greater detail in the novel "It" but Lemire doesn't have the luxury of a thousand page prose epic to define the motivations of his characters.

What King never had however was the brilliance of artists Emi Lenox and Jordie Bellaire at his disposal. Lemire smartly lets the pictures tell the story at times, getting out of the way, and allowing Lenox to inform the reader without a word balloon in sight.

The opening panels are just one example of how impactful simplicity and subtlety can be. The limbs of the dead hero are individually displayed in close-up panels. If there was a question of her condition the looping and curious fly tells the reader otherwise. The somber scene opens to vast pastures dipicting an enormity and sadness to the cruel scene that came before.

As much excellent detail as there is in the landscapes and backgrounds, Lenox shines in designing believable kids with all the attitude, awkwardness and false bravado that can be expressed visually. The furrough of a brow, a smirk, a flick of a cigarette tell the story and reveal personalities all at once.

Superstar colorist Jordie Bellaire is great yet again complimenting Lenox's lines with muted hues that enrich the scenes without overpowering them.

The three-page backup story by Jeff Lemire detailing the struggle of Plutona trying to balance the demands of family, work, and saving the world as the worlds greatest superhero adds poignancy to her mysterious demise.

Behind such a talented group of creators, 'Plutona' transcends its genre with endless charm, brilliant pacing, and an intriguing mystery. It begins familiar and ends with endless possibilities. Jeff Lemire, ever the literary snake charmer, has hypotized us again with a captivating new tale in 'Plutona.'