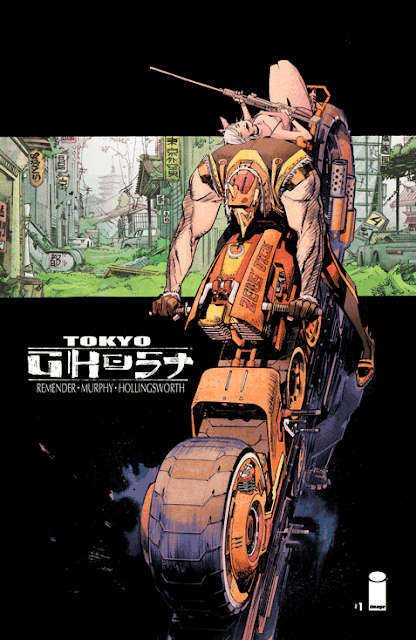 When you have the type of A-list talent behind a title like 'Tokyo Ghost,' you expect a lot and hope such a concentration of genius was worth your time. Rick Remender, Sean Murphy and Matt Hollingsworth not only deliver, but they've essentially created the equivalent of a summer blockbuster action movie. What 'Mad Max: Fury Road' did for movies, 'Tokyo Ghost' does for comic books. It's a wild non-stop techno-obsessed dystopian action thriller that is designed to make you think as it blows your mind.


On the Isle of Los Angeles, digital stimulation is the drug of choice and drug lords rule the land. When wild cards like the murderous Davey Trauma gets out of hand they call in Constables like Debbie Decay and her technologically-obsessed lunk of a boyfriend Led Dent to bring him to justice. Debbie provides the narration to keep readers informed as the story speeds ahead constantly hitting a higher gear. The race to bring in the narcissistic psychopath leads to an exciting hyperactive police procedural tripping on adrenaline.

Remender's commentary on the public's reliance on technology and constant stimulation from television and social media is not subtle but nothing about 'Tokyo Ghost'is meant to be. It's a world that's been desensitized from real emotion or feeling. Some go to extremes to actually feel something whether it's through sex or watching street racers crash and burn before their eyes.

There are pointed scenes like Debbie trading self-esteem pills with a bouncer for access to a club. These tech-zombies are epitomized by Debbie's partner, the hulking Led, who is mesmerized by TV and social media and always connected throughout the issue. It doesn't stop him from scraping the off of an informant while riding his futuristic motorcycle though.

'Tokyo Ghost' is as much a cautionary tale as it is a high-octane thrill ride.

Debbie Decay is the heart of the story. She's a fearless and relentless badass that is determined to catch Trauma but her codependency to the seemingly unavailable Led draws comparisons to Harley Quinn. She hopes that "this one last job" will lead to a greener, digital-free life elsewhere with Led where he'll disconnect and be human again. It gives the story much more weight and Debbie more development.

Just when you think Sean Murphy has peaked he reaches new levels of creativity and artistic virtuosity. His work on his creator-owned 'Punk Rock Jesus' was outstanding. 'The Wake' proved there's nothing writer Scott Snyder could throw at him that he couldn't render even sea monsters. Finally, not even Mark Millar could trip Murphy up by exhaustingly illustrating various periods from history for 'Chrononauts.'This time around there's probably no other artist tailor-made to bring this dystopian techno-world to life like Sean Murphy.

Each scene is intricately laid-out with more detail than we deserve with enough kinetic energy to power a small country. The influences are hard to dismiss but with a mixture of nods to 'Judge Dredd,' 'Road Warrior,' and 'Blade Runner' Murphy creates a fully realized dystopian world. Murphy's signature designs from characters to vehicles are sharp and exhaustive.The landscapes are all encompassing even with some easter eggs along the way.Murphy has gone hog-wild with this one producing his finest work to date.

No stranger to working with Murphy, Matt Hollingsworth knows how to highlight his pencils and breathe life into each scene with moody colors and warm textures where needed. While there is so much to look at on each page, Hollingsworth finds a way to keep the focus on the foreground and emphasize the action of the characters. After 'Chrononauts' and 'The Wake,' the team of Murphy and Hollingsworth have done it again.

'Tokyo Ghost' has energy and visual invention that is so fully realized and dazzling that it thrashes with a punk-rock beat. The creators conjured up an exhilarating, deranged and exhausting tour de force that highlight each of their strengths. It also wraps a beating heart of tenderness in one of the most epic action extravaganzas in comics. Get this book now.
Email Post
Labels: comic books image comics Matt Hollingsworth reviews Rick Remender Sean Murphy Tokyo Ghost