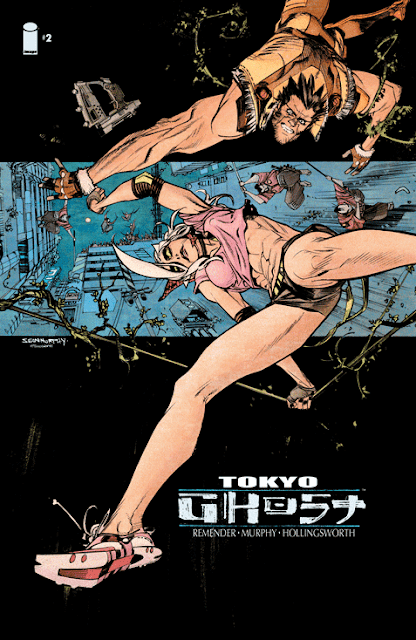 After a blockbuster first issue that had the adrenaline rush of 'Mad Max: Fury Road,' Rick Remender and Sean Murphy take it down a gear or two to develop their dynamic leads and further world build. Debbie and Led meet with their boss with every intention of quitting and retiring to Tokyo Gardens only to agree to one last job in...Tokyo Gardens.

The issue smartly delves into the pasts of Debbie and Led and what brought them together. A series of flashbacks examines the heartbreaking home lives of each of them and how they found refuge in each other. This was before Led, then known as Ted, became a media junkie and we better understand what Debbie sees in him and why she wants to save him. There's an emotional foundation being laid and it adds the right amount of depth and pathos for these otherwise extraordinary characters.

As great a tale Remender weaves it is the beautiful job of ink and color that both Murphy and Matt Hollingsworth provide that make 'Tokyo Ghost' a masterclass in sequential art. The level of detail Murphy provides from one panel to the next is intricate and comprehensive. From the ripples in a pool to the cracks in a column to Mr.Flak's aged sagging manhood, Murphy doesn't miss a thing in fleshing out this brave new world.

Unique character designs using different body shapes articulate in pictures a story in themselves especially the potato of a mother, whose neglectful, disengaged, and hateful demeanor shapes Debbie's childhood. But it's the final splash pages, both awe-inducing and breathtaking all at once, that mark Murphy's superior talent and vision. The Garden Nation of Tokyo is a lush green utopia, free from all the noise and distraction found in Los Angeles, where every leaf, tree branch and surrounding environs are found on the page. Hollingsworth attacks the senses with subdued but effective color schemes that give the entire book an ethereal feel but in those final pages it's a panorama as epic as any landscape you've seen in real life.

Remender's biting social commentary about media consumption and a desensitized society is worn on the book's sleeve while Deb and Led represent a sliver of hope in their humanity.The contrast in storytelling from issue one to two is dramatic but essential to develop a stronger narrative and it succeeds in every way. Murphy and Hollingsworth are a formidable art team as any in the history of the medium. 'Tokyo Ghost' is one of the year's best already and deserves to read religiously.