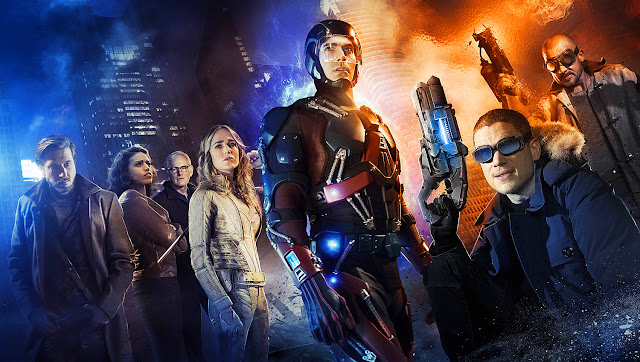 Heroes and villains join forces to become DC’s Legends of Tomorrow, beginning January 21 on The CW!

Who needs the Justice League when you have DC's Legends of Tomorrow time-traveling to stop the villainous immortal dictator Vandal Savage from conquering the planet. That's the premise behind the Arrow/The Flash spin-off premiering January 21 on the CW. The new trailer is every bit as epic as the description implies.

Hunter's exposition includes the line, "I've seen Men of Steel die and Dark Knights fall, " which could mean Superman and Batman obviously. If the writers aren't trolling this would be the first time those two have been referenced in the CW universe. However, if they are they could simply play it off as actual knights in armor from medieval times considering Rip is a time traveler.

Other cool stuff seen in the action-packed trailer is Ray Palmer as the Atom exploding from tiny to regular size while deflecting bullets and beating up the bad guys. Also, we get a look at Firestorm's new suit that reflects the colors of the classic suit from the comics. Hawkgirl and Hawkman are featured heavily with wings fully extended, flying and arguing apparently. Sara Lance as the White Canary fighting side-by-side with a giddy Heat Wave is especially fun. January 21 can't come soon enough.

Check out the trailer and synopsis below.

On Thursday January 21, The CW kicks off a new night of action and adventure with the highly-anticipated series premiere of DC’S LEGENDS OF TOMORROW (8:00-9:00pm ET/PT)followed by the return of the critically-acclaimed post-apocalyptic drama THE 100 (9:00-10:00pm ET/PT). In DC’S LEGENDS OF TOMORROW, when heroes alone are not enough… the world needs legends. Having seen the future, one he will desperately try to prevent from happening, time-traveling rogue Rip Hunter is tasked with assembling a disparate group of both heroes and villains to confront an unstoppable threat — one in which not only the planet is at stake, but all of time itself. Can this ragtag team defeat an immortal threat unlike anything they have ever known?
DC’S LEGENDS OF TOMORROW stars Victor Garber (“The Flash,” “Alias”), Brandon Routh (“Arrow,” “Superman Returns”), Arthur Darvill (“Doctor Who”), Caity Lotz (“Arrow”), Ciara Renee (“Pippin”), and Franz Drameh (“Edge of Tomorrow”), with Dominic Purcell (“The Flash,” “Prison Break”) and Wentworth Miller (“The Flash,” “Prison Break”). Based on the characters from DC Comics, DC’S LEGENDS OF TOMORROW is from Bonanza Productions Inc. in association with Berlanti Productions and Warner Bros. Television, with executive producers Greg Berlanti (“Arrow,” “The Flash,” “Supergirl”), Marc Guggenheim (“Arrow,” “Eli Stone,” “Percy Jackson: Sea of Monsters”), Andrew Kreisberg (“Arrow,” “The Flash,” “Eli Stone,” “Warehouse 13”), Phil Klemmer (“The Tomorrow People,” “Chuck”), Chris Fedak (“Forever,” “Chuck”), and Sarah Schechter (“Arrow,” “The Flash”).