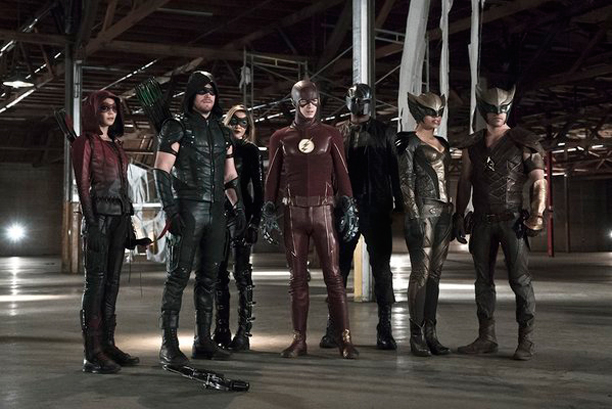 We got our first glimpse at this year's 'Arrow/The Flash' crossover event featuring the emergence of Hawkgirl, Hawkman, and the return of Ray Palmer (not yet the Atom) at the end of 'Gorilla Warfare.' Now, the CW has released an extended look at Ciara Renee and Falk Hentschel as reincarnated lovers who also harness the power of an ancient Egyptian winged god.The trailer looks great but we'll have to wait until after Thanksgiving to see them in action.

In its second major crossover event with “Arrow,” Vandal Savage (guest star Casper Crump) arrives in Central City and sets his sights on Kendra Saunders (guest star Ciara Renée). After Vandal attacks Kendra and Cisco, they turn to Barry for help. Realizing how dangerous Vandal is, Barry takes Kendra to Star City and asks Oliver and team to hide her until he can figure out how to stop Vandal. However, things quickly go from bad to worse when a man with wings AKA Hawkman (guest star Falk Hentschel) shows up and flies off with Kendra. Meanwhile, Harrison develops a serum to make Barry run faster and asks Jay (guest star Teddy Sears) to test it out

Oliver and Barry Allen take Kendra Saunders and Carter Hall to a remote location to keep them hidden from Vandal Savage while they figure out how to defeat him. Malcolm arranges a meeting between Vandal, Green Arrow and The Flash that doesn’t go as planned. Meanwhile, Felicity, Thea, Diggle and Laurel work with Team Flash to come up with a weapon powerful enough to destroy Vandal Savage.