Happy Thanksgiving week everyone! Let's be thankful for some great comic books this week as well. Frank Miller is back and he along with Brian Azzarello, Andy Kubert, and Klaus Janson are bringing the highly anticipated sequel 'Dark Knight III: The Master Race.'Annie Wu takes over for Fiona Staples on 'Archie' #4, 'The Black Hood' #7 returns with a new arc, 'Moon Girl and Devil Dinosaur' #1 premieres with Amy Reeder, Brandon Montclare, and Natasha Bustos, and 'Witchblade' #185 marks the end of the long-running series. A lot to choose from and that's just the beginning. Check out other notable releases below as well as the slideshow above featuring music from Mike Shinoda and the X-ecutioners. 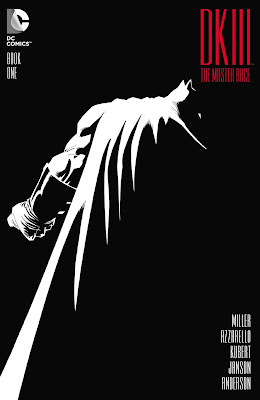 (W) Frank Miller, Brian Azzarello (A) Andy Kubert & Various (CA) Andy Kubert, Klaus Janson
The epic ending you never saw coming is here because you demanded it! The Dark Knight rises again to face the dawn of the master race! 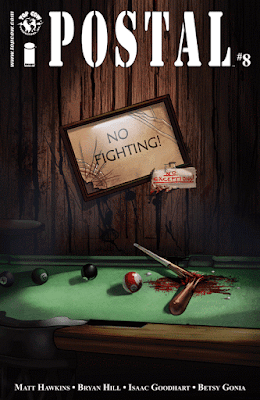 (W) Bryan Edward Hill, Matt Hawkins (A) Isaac Goodhart (CA) Linda Sejic
Mark watches the struggle for power in Eden turn into violence when an internal threat joins forces with the outside world. To save the town, Mark will have to trust the man who wants to destroy it, his own father.

(W) Joe Keatinge (A/CA) Nick Barber
THE PROFESSIONAL WRESTLING EPIC BEGINS IN AN OVER-SIZED FIRST ISSUE!
RINGSIDE is an ongoing series set within the world of professional wrestling, written by JOE KEATINGE (SHUTTER, GLORY, TECH JACKET) and drawn by acclaimed illustrator NICK BARBER, combining the ensemble drama of THE WALKING DEAD with interconnected rotating perspectives akin to The Wire. Each issue will explore the relationship between art and industry from the view of the wrestlers themselves, the creatives they work with, the suits in charge and the fans cheering them all on.
But that's just the beginning.
The real violence is outside the ring. 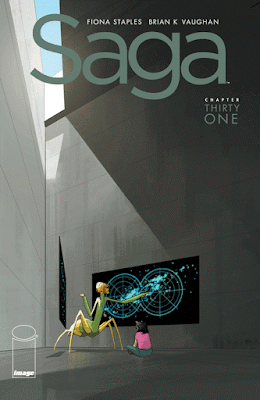 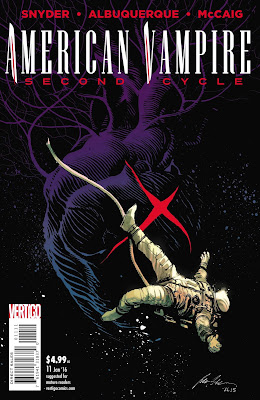 (W) Scott Snyder (A/CA) Rafael Albuquerque
From the depths of Area 51 to outer space, "Dark Moon" has pushed our cast to the limit. Be there for the jaw-dropping finale, as the forces of the Tongue make their final shocking play. The great weapon-Issaku-is revealed as the battle for the soul of a country and our characters reaches its shocking climax. This extra-sized issue is the end for the Second Cycle of AMERICAN VAMPIRE, but look for the Third Cycle to begin in early 2016! 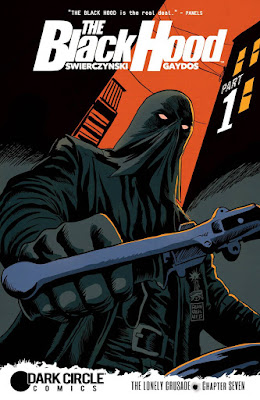 (W) Duane Swierczynski (A) Jesus Aburtov, Michael Gaydos (CA) Francesco Francavilla
"The Lonely Crusade": Part 1-The second action-packed arc of The Black Hood begins here! Greg Hettinger returns to Philadelphia and promises his closest friend, Jessie Dupree, that his hood-wearing vigilante days are over. But it's a promise he's going to struggle to keep - especially when a gang calling themselves "The Crusaders" are prowling the City of Brotherly Love, scooping up "undesirables" and asking if they want to be saved! 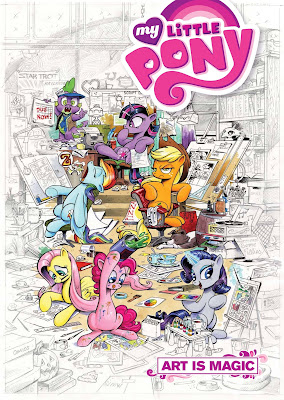 (A) Tony Fleecs & Various (CA) Andy Price
Celebrate the charming and diverse artwork of IDW's My Little Pony comic book series is this special art book! Read along as fan-favorite artists Amy Mebberson, Sara Richard, Tony Fleecs, Andy Price, Brenda Hickey, and Agnes Garbowska showcase a selection of their most cherished pieces, provide insight into their process, and share the identities of their favorite ponies! Fans of My Little Pony or the comic arts alike are sure to awe at this bright and inspired collection. 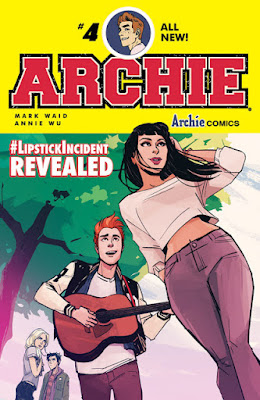 (W) Mark Waid (A/CA) Annie Wu
The biggest comic series of the year continues! What was the "lipstick incident" that pushed Archie and Betty apart? And can the smartest boy in Riverdale fix it? The spotlight is on Dilton and Moose as, together, they show what friendship is really all about! We're pleased to welcome Annie Wu (Black Canary, Hawkeye) to Riverdale, as she takes over art duties in this brand-new issue! 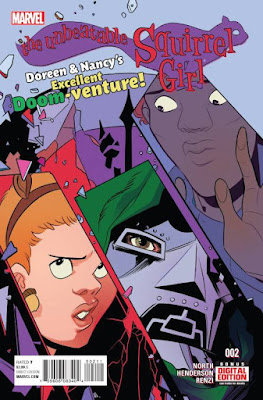 (W) Ryan North (A/CA) Erica Henderson
• Remember last month when we said #1 was a great jumping-on point for new readers? Well, guess what? #2 is too! Start of a new story, baby!
•  (It's ALSO a great "continuing-on" point for existing readers.)
•  In this issue, Squirrel Girl gets sent BACK IN TIME and also ERASED FROM HISTORY. Only her friend Nancy even remembers she existed!
•  So Nancy turns to the only hero she can contact (on social media) for help in rescuing her: IRON MAN.
•  Also a surprise villain shows up, from the past! It could be LITERALLY ANY BAD GUY but it's a good one, I PROMISE.
•  P.S.: it is not Galactus; we already did him.
Rated T

(W) Kate Leth (A/CA) Matt Cummings
The Corners are four warriors who have been training since birth to receive the powers from the prophecy-the powers that went to Aimee and her woefully unprepared new friends instead! 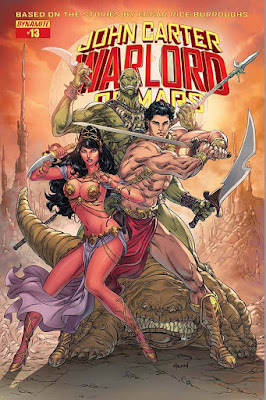 (W) Ron Marz, Ian Edginton (A) Ariel Medel (CA) Fritz Casas
Experience Mars in all its barbaric glory, as John Carter and Dejah Thoris continue their search for a way to preserve their dying world. But their journey may lead to certain death, as a mysterious foe stalks their every move! Co-writers Ron Marz and Ian Edginton continue their run, joined by rising artistic star Ariel Medel.

(W) Amy Reeder, Brandon Montclare (A) Natacha Bustos (CA) Amy Reeder
LUNELLA LAFAYETTE is a preteen super genius who wants to change the world-but learned the hard way that it takes MORE than just big brains. Fearful of the monstrous INHUMAN genes inside her, life is turned upside down when a savage, red-scaled tyrant is teleported from prehistoric past to a far-flung future we call TODAY. The pair are many things, and together the most amazing Marvel Team-Up. MARVEL PRESENTS... MOON GIRL & DEVIL DINOSAUR!
Rated T 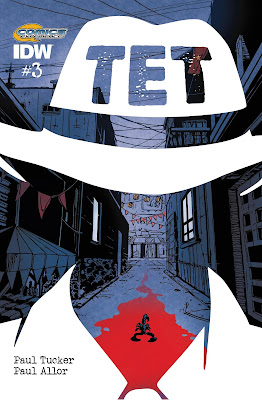 (W) Paul Allor (A/CA) Paul Tucker
1984. The war is over. Eugene is wounded, inside and out. And now, he finds himself going back to Vietnam, to set things right, and maybe even start again. But as Eugene sinks deeper into a 16-year-old murder investigation, he finally understands how wrong he's been. And that some wounds never heal. 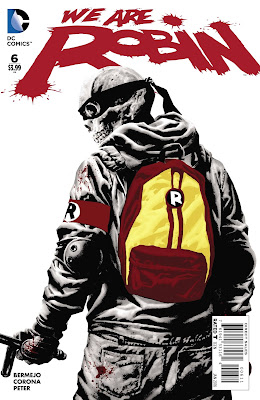 (W) Lee Bermejo (A/CA) Jorge Corona
The Robins are reeling from yet another loss-but with the Reaper on their tails, there's no time regroup! As the team fractures, each Robin must decide who can be trusted. And is it worth the risk to wear the R?

(W/A/CA) Stjepan Sejic
When teenage Mary gets the Witchblade, the plans of Sonatine, Sabine and Kenneth Irons are disrupted. Emissaries of the Darkness and the Angelus pressure Mary to side with them and her decision causes hilarity and awesomeness to follow in Sejicstyle! 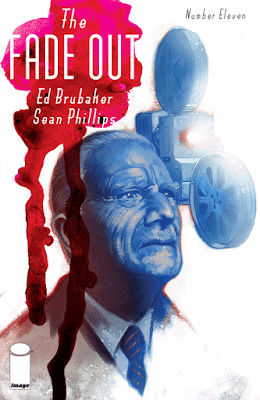 (W) Ed Brubaker (A/CA) Sean Phillips
All the threads of the mystery come together, as Charlie and Gil barrel headfirst toward trouble!

Major Plot Point:
A major clue in the murder is revealed.

(W) Dave Dwonch (A/CA) Anna Lencioni
After the tragic events of last issue, Cyrus Perkins has gone from aimless Taxi Cab Driver to amateur Detective. Teaming with Michael, the ghost boy trapped in his car, Cyrus speeds into mystery, danger, and a conspiracy too twisted for words! 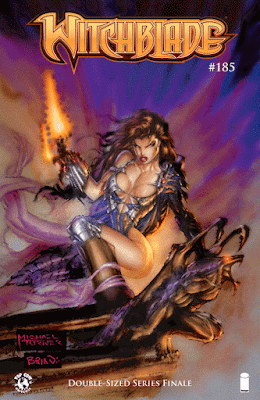 (W) Ron Marz, Matt Hawkins (A) Abhishek Malsuni & Various (CA) Michael Turner
SERIES FINALE!
An era comes to a close with the double-sized final issue of Sara Pezzini's twenty-year run. Several previous Witchblade artists return to the title to send her off in style. The story resolves Sara's return to New York and her relationship with Gleason and her attempt to find a suitable bearer to give the Artifact to.