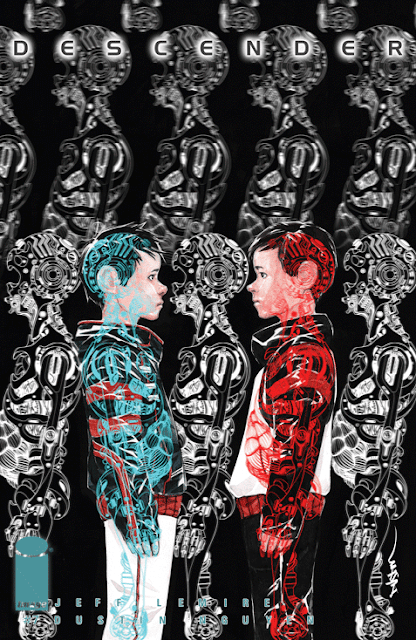 'Descender' returns after a triumphant first arc and trade release with new characters, twists and turns. If you thought Jeff Lemire and Dustin Nguyen had used all their best material in the first six issues, issue seven demonstrates not only some more plot developments but a change in tone and stakes. This sci-fi masterpiece keeps delivering with gorgeous artwork and emotional storytelling.


With few options, TIM-21 and crew have to join Psius, The Hardwire and TIM's robotic brother and killer TIM-22 off the planet. It's a tense situation that Lemire squeezes every emotional moment out of as TIM-21 has to leave behind some friends.  Elsewhere, on the ice planet of Hoth Hepton a mysterious figure pushes his weight around. His foreboding presence may not be a surprise at the end, but it's a crowd-pleasing twist that I couldn't help but relish looking forward.

Lemire continues to breath life into this epic with fresh new directions and characters that make sense in a universe that depended on robots but now fear and loathe them. Mostly, we're not quite sure where Lemire is taking us but with Nguyen we know it's going to look amazing.

There are two storytellers on 'Descender' that work in tandem to express so much emotion and action with a concert of images and words. Nguyen's watercolors are so deep and sweeping each panel is perfectly framed with excellent use of negative space and restrained flair. The scenes are paced in a deliberate way that it creates elevations of anxiety and suspense. The reveal at the end is a brilliant splash of excitement.

Steve Wands is doing a remarkable job with the lettering. Each balloon is tailored to humans and robots adding another character trait in a world full of strange and fascinating characters.

'Descender' #7 begins its second arc with a fantastically accessible jumping on point that delivers new twists and engrossing new characters. It further solidifies its place as one of the year's best comic book series with science fiction that is exciting, absorbing and emotionally resonant.