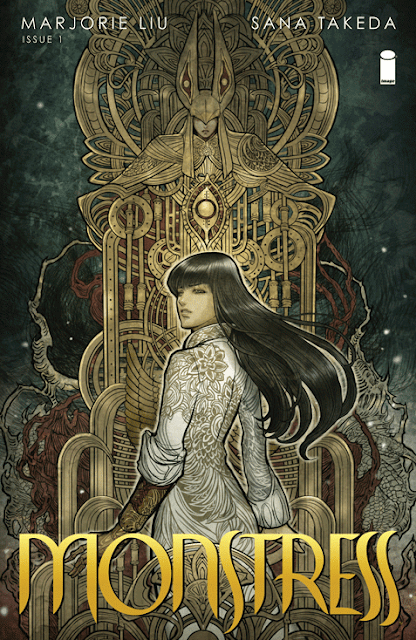 'Monstress' #1 is a stunningly conceived dark fantasy that is beautifully illustrated by Sana Takeda and brilliantly written by Marjorie Liu. The oversized issue offers 72 pages of epic world-building and a character arc that feels like a one-shot as dense and moving as a collected trade. It's a somber but inspiring story set in a world scarred by war, prejudice, injustice, and monsters.

First, there is a number of things that make 'Monstress' unique and empowering. The creative team consists of two women of Asian heritage, a rarity in a lot of mediums but comics in particular. Most of the characters are women, and as varied and complex as you've ever seen in an ongoing series. The most haunting is the protagonist, Maika.

The opening is an unflinching and raw introduction of a sullen, naked Maika about to be auctioned off as a sex slave. A brutal and archaic trade amid the opulence of the buyer's home that Takeda painstakingly realizes with ornate architecture and classical furnishings. Maika is saved one indignity by being taken by an order of nuns led by the vicious Sophia instead of the disgusting Sir Conroy. Maika's fate will be torture and dismemberment at the hands of Sophia and her experimental chambers of science and magic unless she finds a way to escape.

In a world devasted by war, factions emerged like Maika's Arcanics and the powerful Cumaea of which Sophia is from. Maika is half human, half monster with some powers she can't entirely control. Powers that summon a beast within her that has changed the course of battles in the past like the oft-mentioned 'Battle of Constantine.' The weakest have it the worst and the comic doesn't shy away from the horrors of war, death, and torture. It doesn't relish it either. It is a matter-of-factly portrayed and not merely for shock value. Nothing chills the spine like a young being begging not to have parts of him eaten.

I couldn't help but find parallels between Maika and Furiosa from 'Mad Max: Fury Road.' They both have indomitable spirits and steely determination. They both are missing part of their arm below the elbow and unhindered by it. And a relentless desire for revenge and justice driven from a place of deep loss and pain. Needless to say, but this is a mature fantasy adventure that only finds relief in a snarky talking cat with two tails during a couple of flashbacks. The rest of the story belongs to Maika's struggle and journey to defeat the monsters that are more human than creatures.

You will be immersed into this world because of Takeda's intricate and comprehensive attention to detail. This is a fully realized universe where every cobblestone in the street is accounted for, every strand of hair is delicately arranged, and every costume has layers, buttons and a style all its own. The wide landscapes, the deep wrinkles of a merciless jailer, the electricity of a spell all envelope the eyes longer than you expect it to and get lost in the amount of depth and character of each panel.

'Monstress' #1 is a dazzling dark fantasy with subversive social and political undertones that cut at the heart our existence now as told through this grim fairytale of vengeance and injustice. Liu and Takeda have taken elements of steampunk, fantasy and kaiju and created a singularly frightening world where a young woman defies her oppressors but doesn't triumph without sacrificing part of her soul. This is the type of storytelling that envelopes you and doesn't let you go.