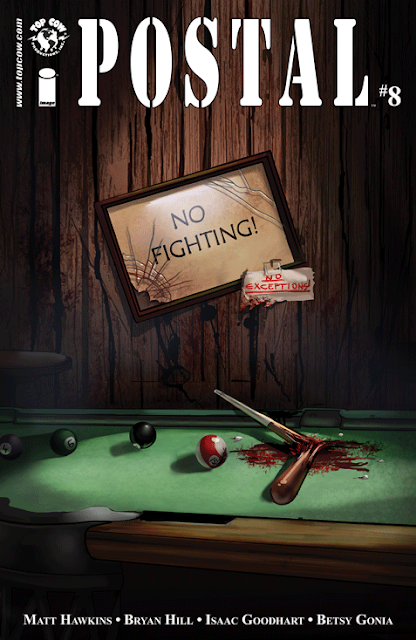 Eden is a type of purgatory for people with criminal pasts. A safe haven for those people to disappear. Laura Shiffron is the mayor, emboldened to keep the townsfolk in line by whatever means necessary. Her grip on the unmapped town may be slipping as others begin undermining her authority. In a place full of shady residents, the biggest threat may be closest to her.

In order to keep tabs on what's going on in Eden, Laura has acquired the expertise of convicted child killer Johan, who swears he's innocent, to design a surveillance system throughout the town. Meanwhile, Maggie has enlisted the help of Mark to dispose of Johan because he's making people nervous in town. They're worried he'll strike again and kill a kid. Maggie has suddenly become more proactive and aggressive considering the town is made up of people with dubious pasts. Why single out Johan now?

If Matt Hawkins and Bryan Hill ever treaded in some very gray waters during this series it's never been murkier than this issue. The story is colored in shades of gray as to what is justice and who has the right to dispense it. Johan might be innocent as the flashbacks aren't conclusive. Maggie just might be making this moral judgment without the evidence to back it up. It's something that the logically thinking Mark brings up to Maggie. Is it their place to be the ones to kill Johan?

Keeping Eden dark and mysterious are Isaac Goodhart's fluid pencils and Betsy Gonia's warm colors. Maggie's look now exudes a confidence she didn't before. Her flowing hair, dark sunglasses, and body language have taken a more assured demeanor. Two scenes in particular that stand out are when Maggie tells Mark of her plan in the woods, a combination of shadows and piercing sunlight and of a fire later in the story, a scorching rage of fire washed in orange and yellow.

'Postal' #8 delves into some serious moral ambiguity challenging the reader's idea of justice. It also sets the table for an inevitable confrontation. It's one of the best issues so far using the complexities of the characters to expand on the world around them exposing new layers. It's a great jumping-on point for new readers and a treat for established ones.