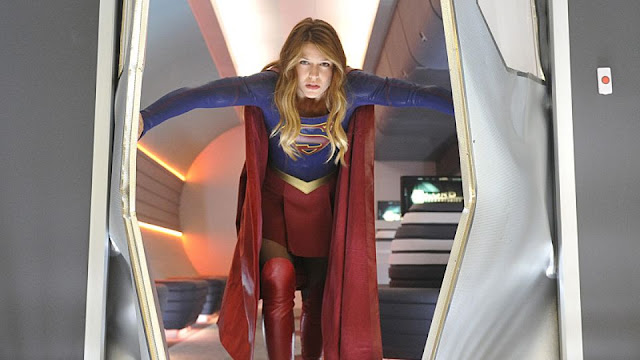 'Supergirl' continues to find its groove with some fantastic effects, positivity, and unyielding enthusiasm. The dialogue could use some work and the DEO scenes still need a kick in the pants, but as long as Melissa Benoist is on the screen the show is alive.

Subtlety is still not the show's strong suit as it usually hammers home the episode's theme. Monday night's 'How Does She Do It?' drove the narrative about juggling different aspects of one's life. Kara with her day job and superhero duties and Cat with her empire and son. The opportunity comes up to help Cat with her many duties by babysitting her tween son who just happens to be a huge fan of, you guessed it, Supergirl.

At least, young Carter Grant's crush is based on Supergirl's bravery and desire to help people. It shows that she's relatable to boys too and it's not for shallow reasons. Kara is a lot of things but maybe not the best sitter. Carter spends most of the time in the office but finds a kindred spirit in Winn and video games.

Kara is pulled away by a mad bomber terrorizing National City. The beauty of 'Supergirl' is that such a powerful hero requires larger-than-life action and the show constantly delivers. It might be CGI-heavy at times but seeing Kara hold up a building while using her laser eyes to harden support beams is something you can't see anywhere else on TV.

The conclusion of the episode wasn't as clear-cut as others. There's an emotional and moral dilemma when Kara has to make decisions like saving people at the airport or on Maxwell Lord's bullet train. Of course, Carter is on the train (some babysitter) and she rushes to save him. Meanwhile, Alex and Hank are trying to disarm the bomb at the airport. Luckily, the red-eyed, super-strong, Hank stealthily deactivates the bomb. Could Hank be the Cyborg Superman from the comics? The show keeps teasing so it's certainly getting more and more possible.

The time comes to face the bomber at the head of the train, trying to talk him out of detonating the bomb killing dozens of people. Kara tries to reason with Ethan Knox, who's distraught about losing custody of his sick daughter, but despite her pleas he is resolute. He does give her a chance to save the others while reluctantly letting Knox loose to get far enough before he blows himself up. Empathy and understanding outweighed sheer strength in this confrontation with Knox. Kara isn't able to save Knox and so the ending is thrilling with a somber loss.

Letting Knox go to his death to save everyone else weighs on Kara's mind and dismisses the popular thought he was just crazy. He was sad she tells the others and finds out why. Lord financed his daughter's medical care in exchange for Knox setting up those bombings. The confrontation between Kara and Lord felt a little familiar. It was reminiscent of Superman confronting Lex Luthor in the 1978 movie. He was testing her, using the calamities he orchestrated to see what she was capable of. The quality of baddie on the show just leveled up to psycho billionaire terrorist.

There are some romantic complications with James, Lucy Lane, and Winn. The writers artfully avoided painfully cliched love triangle tropes with only slightly cringe-worthy cliched love triangle tropes. In the end, despite Kara's feelings for James she encouraged him to work things out with Lucy. Thus, the lovey-dovey couple last week when the episodes were swapped because of the show's bombing plotline was too close in timing to the attacks in Paris.

There was also some tension between Alex and Lord which could prove troublesome going forward.

Seeing Kara struggle, learn, and overcome obstacles is part of the draw here because even though she's as powerful as Superman she's still in training. Everything doesn't always come easy and with Melissa Benoist's effervescent spirit and charm it helps carry Kara through virtually anything. There's always room for a hero that's positive, inspiring and embraces her powers for good.