A lot of my favorite books came out Wednesday. Aliens/Vampirella, Paper Girls, Plutona, Big Man Plans TP, Rat Queens HC, Rocket Girl, The Humans, and Exit Generation to name a few. It's as though comic book publishers were catering to me this week. I can't keep all this goodness to myself. See these and other great titles dropping this week in Notable New Releases. Also check out our new slideshow featuring Queen Bey herself. Happy reading! 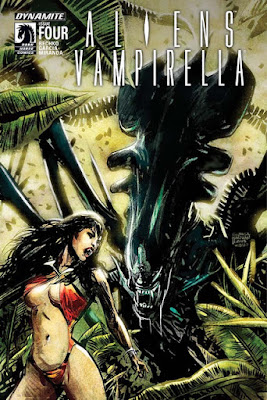 Written by Corinna Bechko. Art by Javier Garcia-Miranda. Cover by Gabriel Hardman. The action intensifies as Vampirella discovers an unlikely ally, but is it already too late to save the human Martian colony? With a supply ship ready to dock and the alien threat growing, Vampirella fears that even the Earth is in danger. Cover price $3.99. 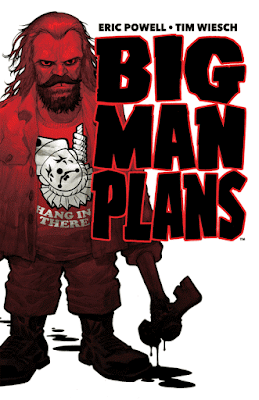 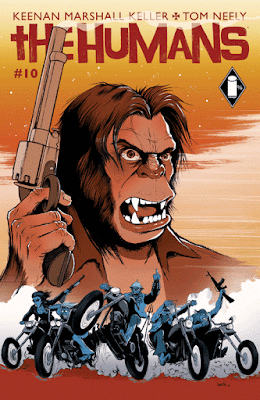 Written by Keenan Keller. Art and Cover by Tom Neely. The Humans' quest for vengeance comes to its violent and bloody conclusion as Johnny and the crew overtake Flex Trucking. Issue 10 concludes the first HUMANS miniseries. THE HUMANS will return in 2016. Cover price $2.99. 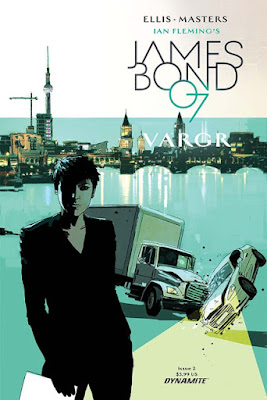 Written by Warren Ellis. Art by Jason Masters. Cover by Dom Reardon. James Bond is in Berlin, alone, unarmed and with no idea of the forces ranged in secret against him. If he can make it to the Embassy, he might survive for a few hours more. But he's getting into that car with that woman, which means he has only minutes to live... Cover price $3.99. 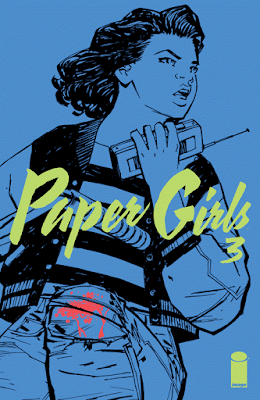 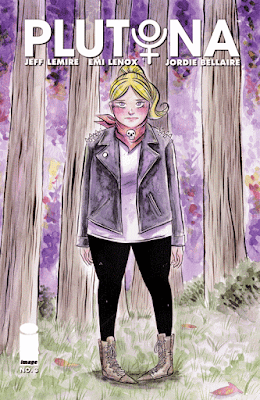 Written by Jeff Lemire and Emi Lenox. Art and Cover by Emi Lenox. After discovering the body of Plutona - the world's greatest superhero - in the woods, a shocking twist starts to tear the kids apart. Cover price $2.99. 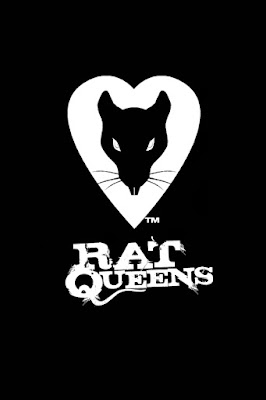 Written by Brandon Montclare. Art and Cover by Amy Reeder. 'NOW WHAT!?' Rocket Girl now shipping Bi-Monthly! DaYoung Johansson was prepared to live a normal life-as normal as 1986 New York City could ever be for a teenage cop from a high-tech alternate reality 2014. But time travelling isn't so simple: changes made in both the future and past are now at war, and the present is stuck in the middle. Cover price $3.50. 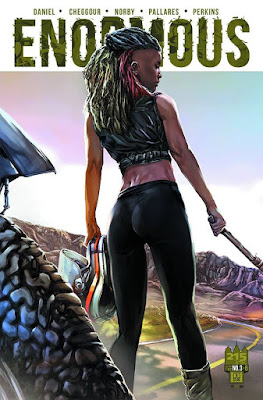 Written by Tim Daniel. Art and Cover by Mehdi Cheggour. James Coyle has strayed far from the safety of his bunker in search of medical assistance to treat his daughter, Joanne. He's managed to evade the giant beasts, but can he survive Allison's vengeance? Cover price $3.99. 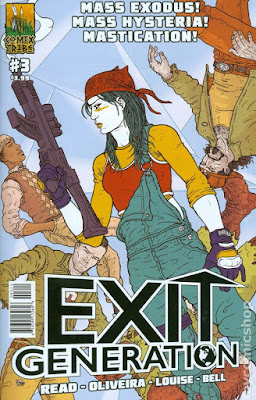 Written by Sam Read. Art by Caio Oliveira. Cover by Ramon Villalobos and Joe Mulvey. Jack and Mo continue their rescue attempt, as they sneak aboard the Ruleian mothership with help from Scrap and Hanna, while Grunt reveals a secret to the prisoners that shocks them to the core. Spaceships get ram-raided! Mysteries are revealed! Aliens get punched in the face! 2015's sci-fi punk rock action rollercoaster cranks the volume up to eleven. Cover price $3.99. 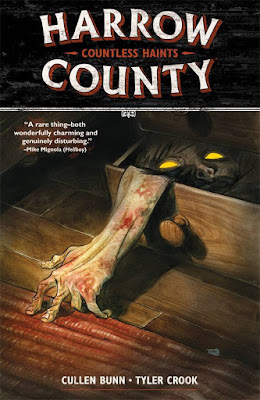 Volume 1 - 1st printing. "Countless Haints!" Collects Harrow County (2015) #1-4. Written by Cullen Bunn. Art and cover by Tyler Crook. Emmy always knew that the woods surrounding her home crawled with ghosts and monsters. But on the eve of her eighteenth birthday, she learns that she is connected to these creatures-and to the land itself-in a way she never imagined. Collecting the first four issues of the southern gothic fairy tale from the creator of smash hit The Sixth Gun, beautifully and hauntingly realized by B.P.R.D.'s Tyler Crook! Softcover, 144 pages, full color. Cover price $14.99. 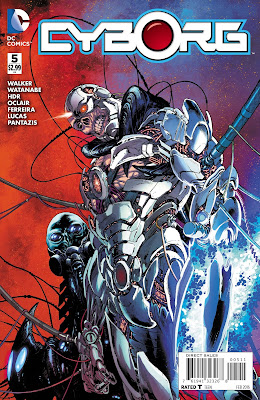 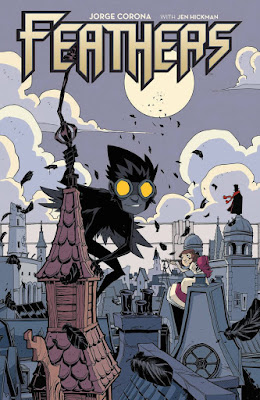 1st printing. Collects Feathers (2014 Boom) #1-6. Story and art by Jorge Corona. What's To Love: Created, written, and illustrated by incredible breakout talent and Russ Manning Promising Newcomer Award winner Jorge Corona (We Are...Robin, Teen Titans Go!), Feathers is a tale of danger, friendship, and adventure that really tugged on our heartstrings. We're so excited to bring Corona's first original series to readers in a beautiful collected hardcover edition. What It Is: Born covered in black feathers, abandoned as a baby in the slums of the Maze, Poe has lived his entire 11-year-old life hidden away under the protection of his adoptive father, Gabriel. He spends his days secretly helping the Mice, bands of orphans who roam the slums, but there is a whisper of an altogether more sinister figure in the shadows, making street children disappear. When Bianca, an over-protected girl from the wealthy City beyond the Wall, escapes into the Maze in search of adventure, their worlds collide. Collects the complete six-issue limited series. Hardcover, 160 pages, full color. NOTE: "A truly engaging all-ages story...The series has all the hallmarks of a classic Disney or Grimm fairy tale, complete with sinister villains, mysterious legends and an overwhelming sense of adventure throughout."-- Big Comic Page Cover price $24.99. 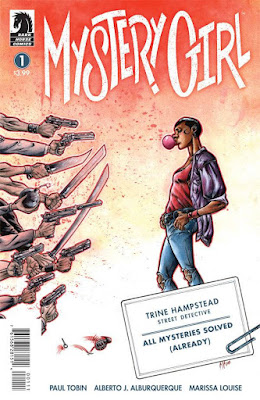 Written by Paul Tobin. Art and Cover by Alberto Alburquerque. Trine Hampstead knows everything. Ask her a question like 'Where are my keys?' or 'Is he cheating on me?' or 'How are there perfectly preserved mammoths in recent ice?' and she just knows. She's the Mystery Girl. The only thing Trine doesn't know is how she knows-or anything else from the last ten years of her life. Cover price $3.99. 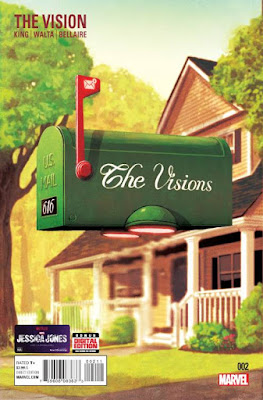 Written by Tom King. Art by Gabriel Hernandez Walta. Cover by Mike Del Mundo. After the stunning, heart-stopping events of Vision #1, the Avengers will never be the same. The Vision and his family attempt to cope with these events in their own, unique way. Though they put on a happy face, each of them can feel their anger growing, blistering, tearing them apart. Will the Visions be able to hold together, or will that anger destroy them and the world around them? Rated T+ Cover price $3.99. 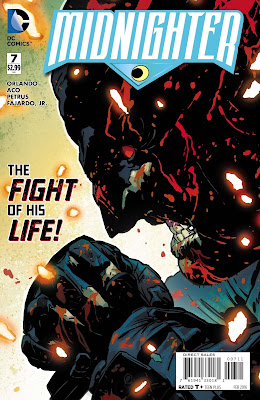 Written by Steve Orlando. Art and Cover by Aco. The mastermind behind the theft of the God Garden's technology is finally unveiled…and Midnighter never could have guessed the ultimate goal of the heist! Cover price $2.99. 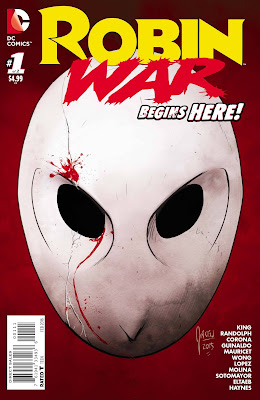 Robin War: Part 1 of 6 - Written by Tom King. Art and Cover by Khary Randolph. In part 1 of this new epic, it's Robins vs. cops! Robins vs. Robins! Robins vs. Batman! And Robins vs. the Court of Owls?! Damian Wayne returns to Gotham City, and he is not happy. There are kids all over the city calling themselves Robin, Bruce Wayne is no longer Batman and the GCPD, led by the new, armored-up Batman, is cracking down on anybody wearing the 'R.' And things only get worse when Red Hood, Red Robin and Grayson all come back to Gotham City... Story continues in Grayson #15. Cover price $4.99. 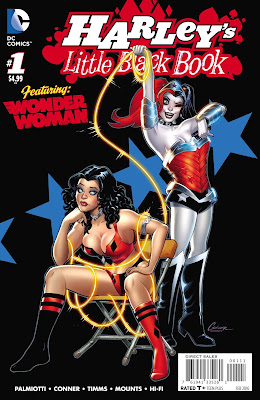 Written by Amanda Conner and Jimmy Palmiotti. Art and Cover by Amanda Conner. It's the sensational debut of a bimonthly, overstuffed, oversized team-up series in which Harley meets (and almost certainly annoys) the greatest heroes and villains of the DC Universe! First up? The incredible Wonder Woman! There's a plot to assassinate Wondy, and Harley is convinced that only she could possibly stop it! (Hey, you want to tell her about all the other options? We tried.) Cover price $4.99. 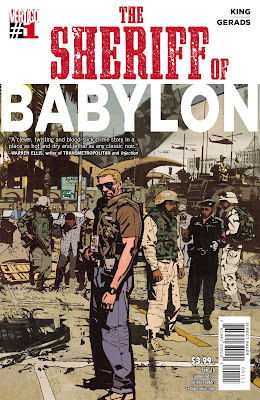 Written by Tom King. Art by Mitch Gerads. Cover by John Paul Leon. Baghdad, 2003. Florida Police officer-turned-military contractor, Chris Henry is tasked with training a new Iraqi police force. When one of his trainees ends up dead, Chris is forced to team up with Nassir, the last remaining cop in Baghdad. Pulling the strings to bring them together is the mysterious Sofia, an American-educated Iraqi who has returned to take control of the city's criminal underworld. This miniseries is a thrilling wartime crime drama told amid one of the most tumultuous times in modern history. THE SHERIFF OF BABYLON is a new eight-issue miniseries pulled from GRAYSON co-writer Tom King's real-life experience as a CIA operations officer and is illustrated by Mitch Gerads, co-creator of The Activity. Cover price $3.99. 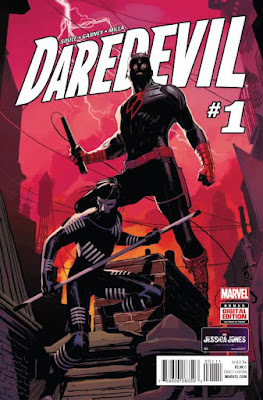 Written by Charles Soule. Art and Cover by Ron Garney. Back in black and on his home turf, Daredevil begins again in New York City as a new enemy emerges. Meanwhile his alter ego, Matt Murdock, is on a new side of the law in the District Attorney's office. Fighting crime in the shadows, prosecuting bad guys in the light, it's a whole new chapter for our man without fear-including the arrival of the devil's advocate. Welcome to Hell, Blindspot. Rated T+ Cover price $3.99. 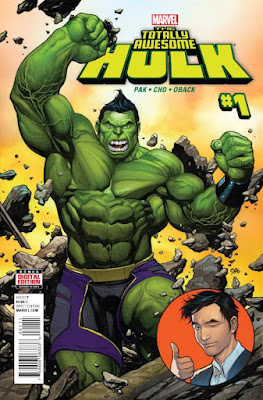 Written by Greg Pak. Art and Cover by Frank Cho. THERE'S A BRAND NEW HULK IN TOWN, AND HIS NAME IS AMADEUS CHO! Get ready for the craziest Hulk story of the millennium as a kid genius decides he's gonna be the best Hulk ever -- and just possibly brings the entire Marvel Universe crashing down into chaos! Totally awesome beach day! Massive monster mayhem! She-Hulk and Lady Hellbender! Massive heart and ridiculous action brought to you by PLANET HULK writer Greg Pak and superstar artist Frank Cho! Is it possible for us to fit in one more exclamation point? YES! Rated T Cover price $4.99. 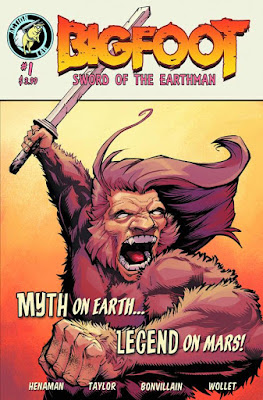 Written by Josh S. Henaman. Art and Cover by Andy Taylor and Tamra Bonvillain. The epic saga begins! High adventure on a distant planet of dinosaurs, warlords, kingdoms and sorcery, where Earth's legendary Bigfoot finds himself in a battle to defeat the ruthless emperor of a barbarian planet! The dying planet needed a hero… what they got was a sasquatch! Cover price $3.99. 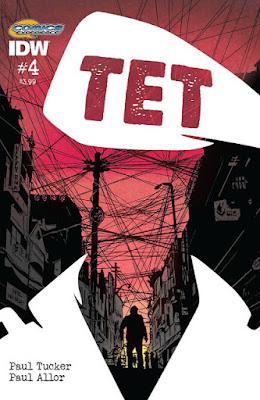 Written by Paul Allor. Art and Cover by Paul Tucker. We've seen Eugene's story. But during his last day's in Vietnam, he finally learns how Ha survived the war. She's always been much stronger than him; and much stronger than he's given her credit for. With all their secrets gone, Ha and Eugene must decide how to move forward. Cover price $3.99. 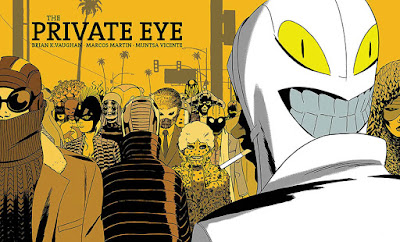 1st printing. Written by Brian K. Vaughan. Art by Marcos Martin. THE EISNER AWARD-WINNING "BEST DIGITAL COMIC" IS FINALLY AVAILABLE IN PRINT! Because retailers, readers, and ROBERT KIRKMAN demanded it, the online sensation from PanelSyndicate.com's BRIAN K. VAUGHAN (SAGA, PAPER GIRLS) and MARCOS MARTIN (The Amazing Spider-Man, Doctor Strange: The Oath) is finally coming to print with this gorgeous deluxe hardcover edition, presented in the story's original widescreen format! Years after the digital cloud "bursts" and exposes all of our worst secrets, THE PRIVATE EYE is set in an inevitable future where everyone has a secret identity. Following an unlicensed P.I. who is thrust into the most important case of his life, this sci-fi mystery explores the nature of privacy with frightening prescience. Hardcover, 12 1/2-in. x 7 1/2-in., 300 pages, B&W. Cover price $49.99. 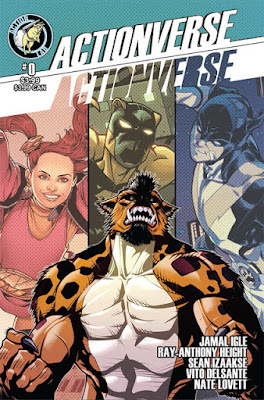 Written by Vito Delsante & Various. Art by Ray Anthony Heights and Sean Izaakse. Cover by Ray Anthony Heights & Various. IT ALL STARTS HERE! Be a part of the largest creator owned crossover that the Publishing world has ever seen. No Publisher has ever dared, let alone successfully brought together the creative minds and properties of over 20 different creators together to create one single and unified Actionverse. Before the main Actionverse story begins, learn about the ties that bind! Molly Danger: pint-sized powerhouse! Midnight Tiger: teen superhero supreme! Stray: the prodigal hero! How are they connected, and how does the villainous Hyena fit in? You do not want to miss this! Cover price $3.99. 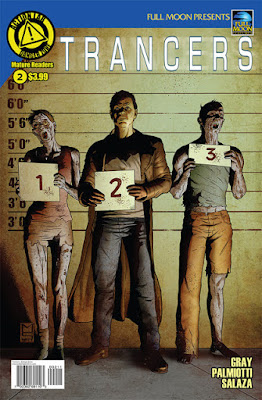 Written by Justin Gray and Jimmy Palmiotti. Art and Cover by Marcelo Salaza. Trooper Jack Deth has been sent back in time to the year 1985 to hunt down the man that killed his wife, but he quickly finds himself on the wrong side of the law. Wanted for a murder he didn't commit, Jack is thrown into a jail full of zombified trancers ready to tear him apart piece by piece. His only hope is in the hands of his future wife Lena. Cover price $3.99. 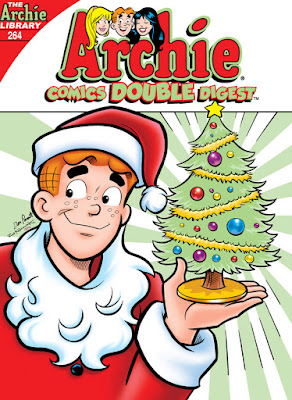 The town leaders are planning a dazzling holiday show right in the center of Riverdale Square! Unfortunately, the Christmas spectacular turns into holiday havoc when they experience unforeseen technical difficulties! It's up to Archie and his friends to revive this merry meltdown-and quick! Can they turn the show around and get everyone back into the holiday spirit in time? Find out in "Holiday Light," the fun, new lead story.