Happy Holidays! This week's comic book offerings are lighter than usual but the quality is still top notch. 'Dark Knight III' continues as does the consistently awesome 'Saga,' and 'Roche Limit Clandestiny' Vol. 2 is available in a trade (great as a gift). There's some fantastic new issues of 'The Paybacks,' 'Mega Man,' 'Moon Girl and Devil Dinosaur,' 'Princeless,' 'Cyborg,' and 'Darth Vader.' Making their debuts this week are 'Hellcat,' 'Last Gang in Town,' 'The Rocketeer at War,' and 'Doctor Mirage.' Check them out and happy reading! 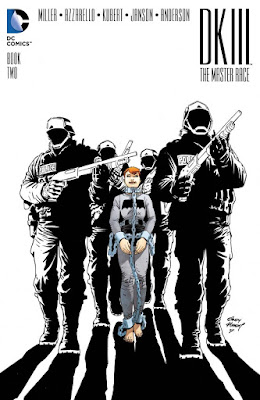 Written by Frank Miller and Brian Azzarello. Art and Cover by Andy Kubert and Klaus Janson. The unexpected finale to the Dark Knight saga continues as Carrie Kelly gets caught…that is, she finds herself…she gets into-well, you're just going to have to read it yourself. Cover price $5.99. 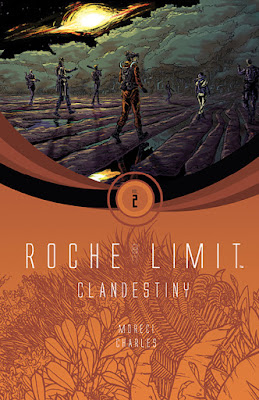 Volume 2 - 1st printing. "Clandestiny!" Collects Roche Limit: Clandestiny (2015) #1-5. Written by Michael Moreci. Art by Kyle Charles and Matt Battaglia. Cover by Kyle Charlesa. The bestselling, critically acclaimed sci-fi series returns! It's 75 years after the events that left the Roche Limit colony in flames. When a crew of military and science personnel are sent to the forgotten and desolate planet on a mysterious expedition, they quickly learn its dark secrets - and that their mission is not what they thought it to be. With danger lurking all around, the crew members fight to find a way off the planet and resist the mysterious presence that haunts them all. Softcover, 144 pages, full color. Cover price $12.99. 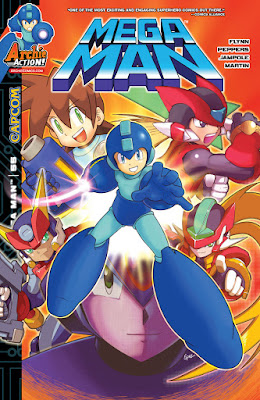 Written by Ian Flynn. Art by Jamal Peppers. Cover by Patrick Spaz Spaziante. The mega-epic, mega-momentous last issue of Mega Man before hiatus is here! 'Everlasting Peace.' When an experiment at the Chronos Institute goes awry, Dr. Light is sent on a journey through time and space! Join us as we follow Mega Man across the ages and learn what it really means to be 'Mega Man'! What legacy will the Blue Bomber leave and what will Dr. Light gain from this epic journey? Find out as we take a historic glimpse into the legendary adventures of Mega Man featuring the worlds of Mega Man, Mega Man X, and even further beyond for the first time ever with the worlds of Mega Man Zero, Mega Man ZX, and Mega Man Legends! Cover price $3.99. 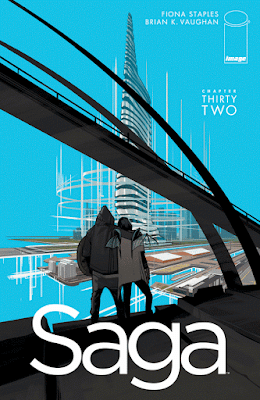 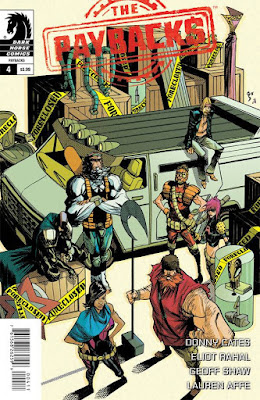 Written by Donny Cates and Eliot Rahal. Art and Cover by Geoff Shaw. Everyone's favorite superhero repo squad finally confront the shadowy organization that's been offing bankrupt heroes, and they work out their differences with poise and civility. No, actually, they fight. But one of the Paybacks is fed up with the life of indentured servitude and decides it's time to default . . . no matter the cost! Cover price $3.99. 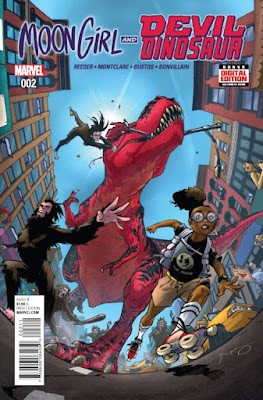 Written by Amy Reeder and Brandon Montclare. Art by Natacha Bustos. Cover by Amy Reeder. B.F.F.!? DEVIL DINOSAUR seems to like MOON GIRL just fine, but a guy's got to eat! What are New York's newest tourists, THE KILLER-FOLK, going to do next? And when prehistoric thunder lizards roam Times Square, a whole lot of shakin's goin' on! Rated T Cover price $3.99. 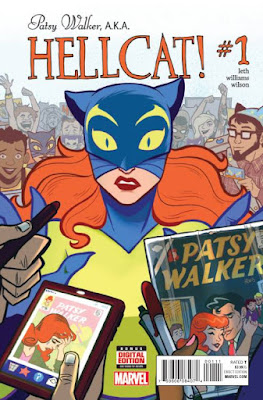 Written by Kate Leth. Art and Cover by Brittney Williams. PATSY WALKER has managed to escape her past, her enemies and Hell itself (literally), but nothing compares to job hunting in New York City! Between trying to make rent and dodging (literal) bullets, Patsy barely has time to deal with her mother's exploitative romance comics about her childhood resurfacing, much less how they start to interfere with her work and dating life. As she goes from living a double life to a triple, what the Hell is Patsy Walker supposed to do? Raise your (literal) claws for PATSY WALKER, AKA HELLCAT! Rated T Cover price $3.99. 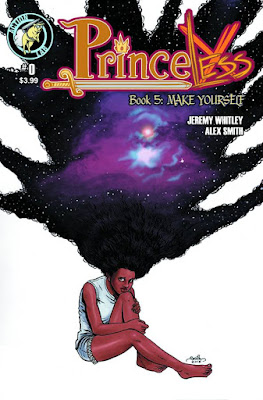 Written by Jeremy Whitley. Art and Cover by Alex Smith. The beginning of a new chapter for Princeless! Adrienne and Bedelia have checked two of Adrienne's sisters off of their list and they have three more rescues left to make. But sometimes the hardest fights aren't with any monsters, but with yourself. Adrienne finally has to face an issue that she's been struggling with for a long time. Cover price $3.99. 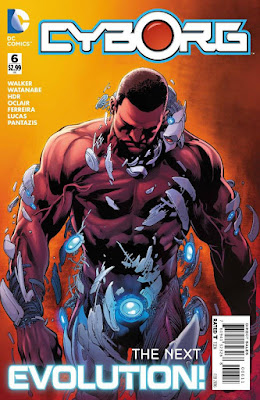 Written by David Walker. Art by Ivan Reis, Felipe Watanabe, Daniel HDR,'Cliff Richards, Albert Oclair and Julio Ferreira Cover by Ivan Reis and Joe Prado. With the fate of the human race hanging in the balance, Cyborg squares off against the Technosapiens. But even if he wins, things will never be the same for Victor Stone. Cover price $2.99. 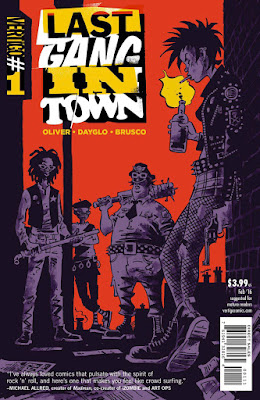 Written by Simon Oliver. Art by Rufus Dayglo. Cover by Rob Davis. Forget what you know of England, of the 'Land of Hope and Glory.' Instead, try damp and depressing, and embrace this miserable island for what it is. Our story kicks off in 1976: the country coming apart at its flared corduroy seams, a decade after the Great Train Robbery, when British crime has gone decidedly soft in the middle. Time for a new generation of criminals to rise: a band of snotty-nosed heroes driven by destiny and cheap cider, who will strike fear back into the establishment, put art back into crime and crime back into art, and pull off what will become known as the heist of the century. This new series, spans three decades, from the punk rock '70s to the decadent '80s and beyond, charting the rise, fall and redemption of a group of bandits that changed the face of the criminal underworld and closed the door on a legacy. Cover price $3.99. 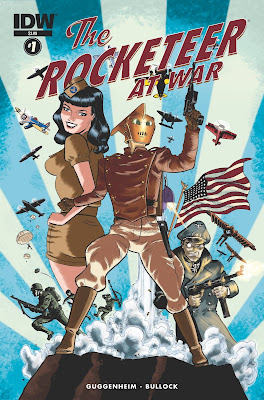 Written by Marc Guggenheim. Art and Cover by Dave Bullock. Europe, 1942-the world is at war! As the Allies battle against the Axis, able bodied men everywhere enlist in the war effort, including Cliff Secord. Secord, also known as The Rocketeer, has been thrust full throttle into the heat of battle, and-with or without his jet pack-he will depend on his wits and daring if he is to survive! Cover price $4.99. 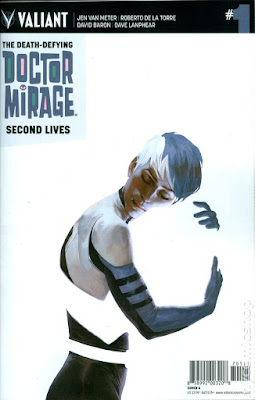 Written by Jen Van Meter. Art by Roberto de la Torre. Cover by Jelena Kevic-Djurdjevic. Occult investigators Shan and Hwen Mirage lived their lives in the thrall of an epic love that few will ever have…until Hwen died tragically before his time. Now, after a perilous trip through the underworld, Shan and Hwen have been reunited…but Hwen is still an intangible spirit of the dead - incapable of opening a spellbook or even touching his wife. Their options exhausted, the death-defying Doctors Mirage are about to enact a dangerous spell to restore Hwen's solid form…and grant his ghost a second life. But, in the wrong hands, their ancient rite will become a tool of terror - and unleash a force of pure, homicidal evil that lusts for the murder of the living and the dead alike… a torturous death that obliterates not just everything a person ever had in this world, but everything their ghost will be in the next! Cover price $3.99. 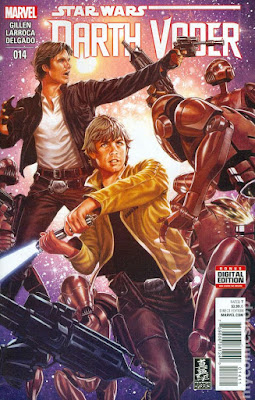 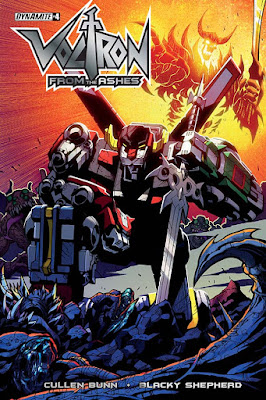 Written by Cullen Bunn. Art by Blacky Shepherd. Cover by Alex Milne. A new Voltron Force has been chosen... and they didn't survive long enough to even launch the great lions. Now, a group of misfits and troublemakers must become the pilots of the Defender of the Universe as a threat from the past unleashes a host of fearsome Robeasts on an unprepared populace! Cover price $3.99.