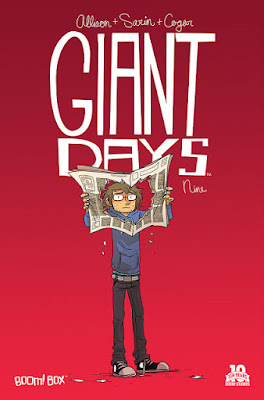 (W) John Allison (A) Max Sarin (CA) Lissa Treiman
Synopsis: Ed attempts to get over his crush on Esther by working at the student paper, but stumbles into even more embarrassing romantic difficulty. 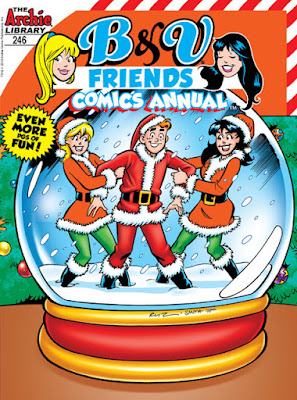 (W) James Gartler (A) Bill Galvan (CA) Bob Smith, Fernando Ruiz
While holiday shopping, Betty and Veronica spot a store Santa who has been abandoned by his elves at the last minute-right before a "Take Your Photo with Santa" event! Betty convinces Veronica that they should get into the spirit and help out-but when they do, Santa's joy turns quickly to panic as his well-meaning helpers unintentionally cause some Christmas chaos! "Naughty or Nice" is a brand new hilarious holiday story you won't want to miss-kicking off a laugh-filled comics annual featuring even more pages of fun! 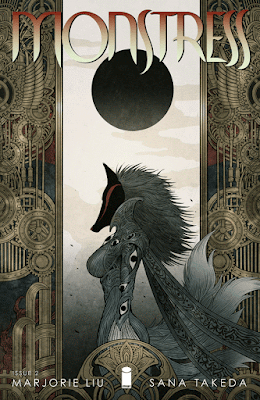 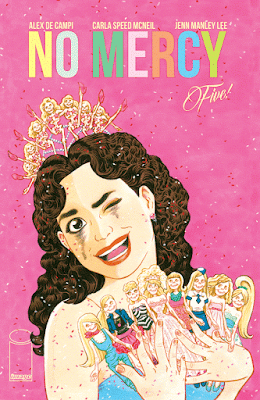 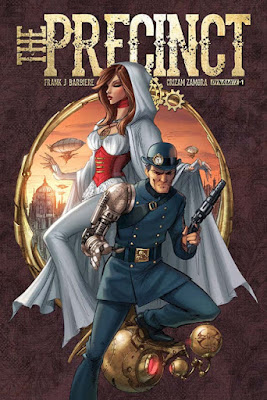 (W) Frank J. Barbiere (A) Crizam Zamora (CA) Joe Benitez
In the sprawling, steampunk metropolis of the big city, it's up to one group to keep the peace and uphold the law-the officers of The Precinct!  Mortimer Hill is a veteran officer who has busted his fair share of criminals, but when mechanical monsters start causing trouble he'll need to use all his wits (and brawn!) to get to the heart of the mystery.  Along with his new partner-a representative from the enigmatic Alchemy Academy-Mort will face the biggest case of his career-and the most dangerous!  Join writer Frank J. Barbiere (Five Ghosts, The Howling Commandos of SHIELD, Avengers World) and Crizam Zamora (Swords of Sorrow: Black Sparrow & Lady Zorro) on an action-packed, steampunk adventure full of mystery and magic! 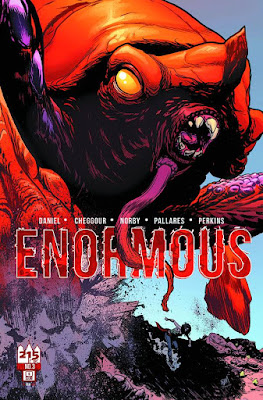 (W) Tim Daniel (A) Mehdi Cheggour (CA) Adam Gorham
James Coyle has strayed far from the safety of his bunker in search of medical assistance to treat his daughter, Joanne. He's managed to evade the giant beasts, but can he survive Allison's vengeance? 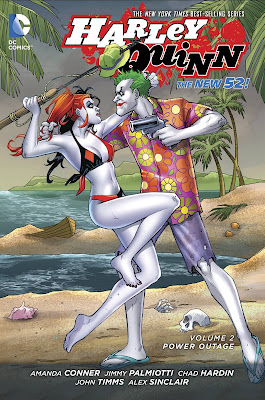 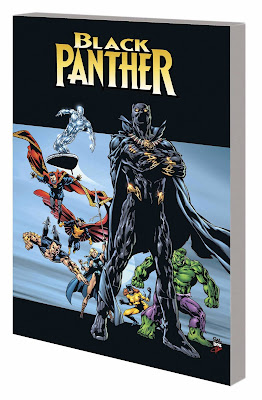 (W) Christopher Priest (A) Various (CA) Sal Velluto
When T'Challa falls to the one foe he's never beaten, Killmonger earns the right to become the new Black Panther! Now, only Everett K. Ross can save T'Challa's life - okay, Ross plus Moon Knight, Brother Voodoo and the Panther God! Still suffering, the deposed Wakandan leader finds himself caught in a cat trap with the Avengers and...Deadpool?! Storm of the X-Men offers comfort as Wakanda finds itself on the verge of war with Lemuria and Atlantis - and Klaw, Malice and Man-Ape threaten to destroy the African Avenger once and for all! Plus: Ross spends a day in Mephisto's metaphorical shoes, and Captain America recounts his never-before-revealed wartime meeting with the former Black Panther, T'Chaka! Super heroics meet geopolitics as only Priest can mix them! Collecting BLACK PANTHER (1998) #18-35 and DEADPOOL (1997) #44.
Rated T+ 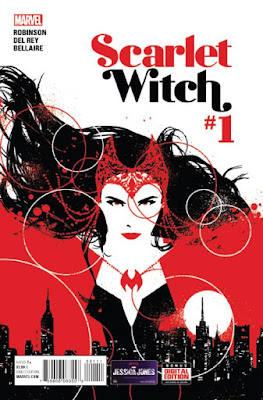 (W) James Robinson (A) Vanesa Del (CA) David Aja
Witchcraft is broken - and the SCARLET WITCH is on a journey across the globe to fix it. From the back alleys of Manhattan, to the serene Greek Isles, to the bustling streets of Hong Kong, Wanda will have to face down her foes and find out who her true friends are. But as Wanda solves magical crimes and pieces witchcraft back together, the most important question remains: Who is the mastermind that broke it in the first place? Written by Eisner Award winner JAMES ROBINSON, with covers by Eisner Award winner DAVID AJA with the first issue drawn by fan-favorite VANESA DEL REY!
Rated T+


(W) Marguerite Bennett (A/CA) Ariela Kristantina
At the dusk of a century, a pair of vengeful Victorian vixens discover a horrifying power that transforms them into rich and strange new creatures. Armed with their dark, evolving forms, they descend into a world of the cultured and occult, with new senses and new sensuality, to forge a life for themselves and the child of their love. This new monthly series is the brainchild of writer Marguerite Bennett (A-Force, Angela, Red Sonja) and artist Ariela Kristantina (Wolverines, Deep State), a comic unlike any you've seen before! 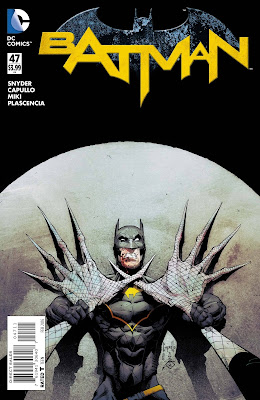 (W) Scott Snyder (A/CA) Greg Capullo, Danny Miki
While Jim Gordon is in the fight of his life against Mr. Bloom, Bruce Wayne discovers a shocking secret about his past that will change everything in Gotham City!
This issue features open-to-order variant covers by Alex Ross that will be shipped in opaque polybags. 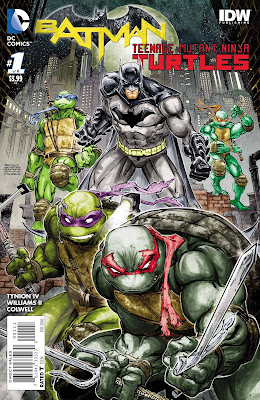 (W) James TynionIV (A/CA) Freddie Williams
DC Comics and IDW team up for the crossover you never saw coming as two of the greatest entertainment icons meet for the first time! In Gotham City, a series of deadly raids leads Batman to believe he's up against a group of highly trained ninjas known as the Foot Clan! Somehow, they've crossed over to another dimension and are determined to take advantage of the situation while looking to get back home. But they haven't come alone: Leonardo, Raphael, Donatello and Michelangelo are hot on their trail. Get ready for excitement as heroes and villains from both worlds clash and team up in an epic battle that threatens the very fabric of reality! 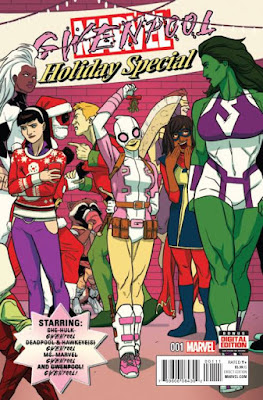 (W/A) Various (CA) Kris Anka
• AN ALL-NEW, ALL-DIFFERENT MARVEL HOLIDAY SPECIAL!
•  She-Hulk throws a holiday party and invites the entire Marvel U!
•  Deadpool teams up with both Hawkeyes - Kate and Clint - to...stop a pickpocket?!
•  Ms. Marvel takes on her most dangerous threat yet: the holiday blues!
•  And then there's the reason for the season(al special): GWENPOOL!
•  Yup, you read that right - Gwen. Pool. C'mon, you know you're curious.
Rated T 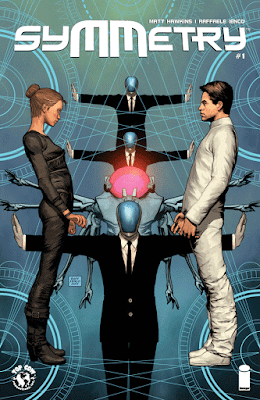 (W) Matt Hawkins (A/CA) Raffaele Ienco
Utopia is here. Hunger, sickness, work...all relics of a long forgotten past. For the greater good of the human species, all individuality, creativity, and negative emotions have been genetically bred out and medically suppressed. The population is limited to segregated areas where people lead long lives of leisure, games, and socializing.  Only one man and one woman seem to notice, care, or think differently. Once they find each other, their relationship sparks a revolution...but will their love cause the salvation or destruction of mankind? 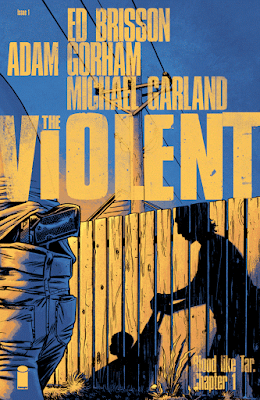 (W) Ed Brisson (A/CA) Adam Gorham
From ED BRISSON (SHELTERED) and ADAM GORHAM (Dead Drop) comes an all-new, ongoing series. Meet Mason, an ex-con and former drug addict who's trying hard to give up his old life. He's got more important things to live for now: a wife struggling to contain her own addiction and a young daughter who needs them both. When threatened with losing his daughter, Mason falls into old habits, stumbling through a string of desperate criminal acts whose repercussions quickly become deadly serious. 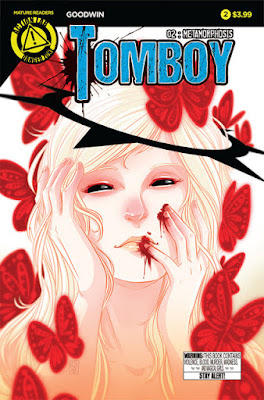 (W/A) Mia Goodwin (CA) Jung-Ha Kim
Addison begins to discover her true mission after the Halloween Murders while her Grandfather makes a deal with the devil to keep any witnesses to her crimes from speaking out. 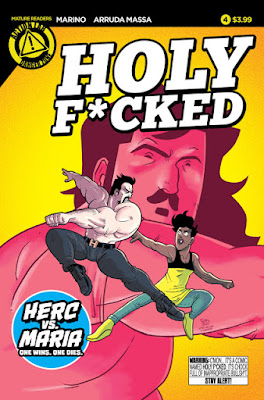 (W) Nick Marino (A/CA) Daniel Arruda Massa
BECAUSE YOU DEMANDED IT: a legendary Greek demigod battles a pissed off Argentinian nun! (Okay, maybe you didn't actually demand it...).  Maria fights her former lover as the fate of Jesus hangs in the balance. Can she dispatch Hercules as easily as his daddy, Zeus?  Plus--what surprise does Satan have waiting at the hospital?