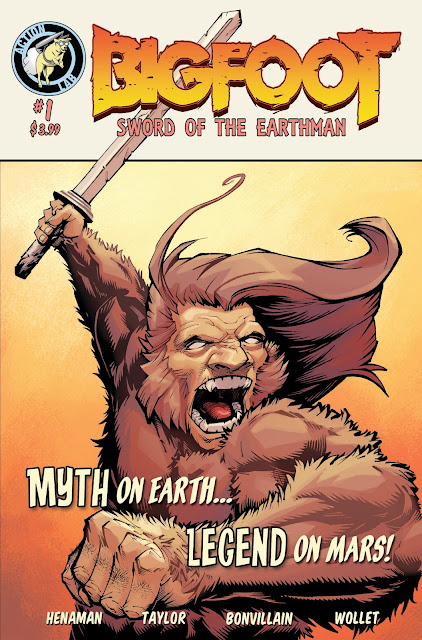 At first glance, the words 'Bigfoot: Sword of the Earthman' sound like a parody title. Thankfully, the team of Josh S. Henaman, Andy Taylor, and Tamra Bonvillain have constructed a fully realized world where Bigfoot is a mysterious but powerful mute with a chatty sidekick under the harsh rule of Mars' dictator. Prepare to see the big hairy guy like never before.


Part John Carter, part Conan, 'Bigfoot' takes the sci-fi angle, mixes old-fashioned sword and sorcery with thrilling gladiator action. Imprisoned and forced to fight, a prison break unleashes the sword-wielding beast on the citizens of the red planet. Accompanied by fellow jailmate, Castor, the duo finds plenty of trouble along the way. Castor provides the narrative throughout as Bigfoot is mum. Henaman deftly incorporates the mythical earth creature and reimagines him as a wild but dare I say sexy brute. This is a sci-fi fantasy story with some teeth.

Taylor and Bonvillain bring it all to life with creative alien designs that fill the page and envelope the eye. The landscape is drenched in reds, yellows, oranges in perfectly laid out panels.

'Bigfoot: Sword of the Earthman' #1 is a very creative and fun mash-up of genres with a ton of potential. It gets off to a promising start making it definitely worth picking up.