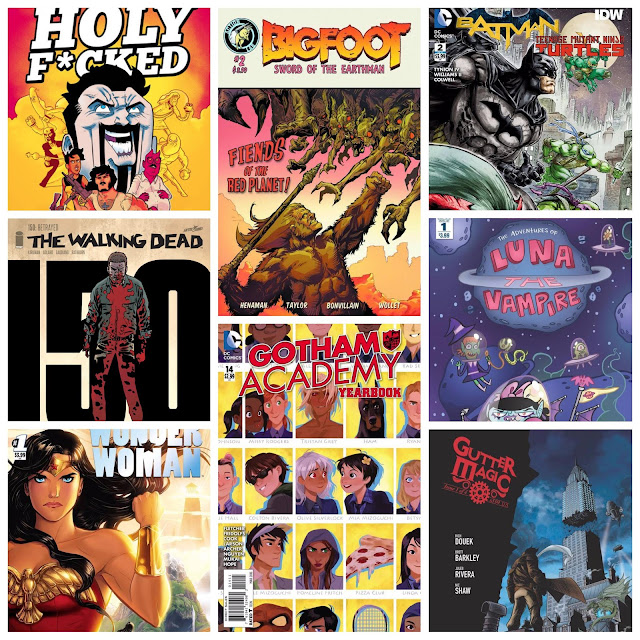 I hope fans still have plenty of holiday cash still handy because this week's haul of new comics is going to drain those funds quite rapidly. A new Falcom emeges in the pages of  'Captain America: Sam Wilson,' the 150 issue anniversary for 'The Walking Dead' drops, the gorgeous 'Legend of Wonder Woman' #1 makes the leap from digital to print, there's more 'Huck,' Robert Hack guests on 'The Black Hood,' Marguerite Bennett has two books out, trades for 'Princeless: Raven the Pirate Princess,' 'Shutter,' and 'Holy F*cked' are out today and new series 'Gutter Magic' #1 debuts. And that's just the beginning. Happy reading! 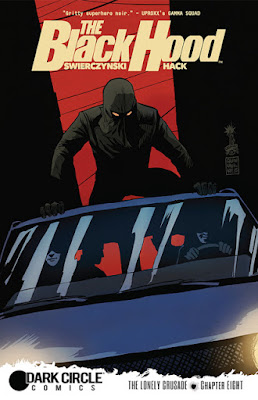 Written by Duane Swierczynski. Art by Robert Hack. Cover by Francesco Francavilla. 'The Lonely Crusade,' Part 2. The Black Hood has tracked down the 'Crusaders,' a mysterious group of vigilantes who have vowed to clean the 'scum' off the streets of Philadelphia. But their first encounter leaves our man beaten, humbled - and hungry for payback. The Crusaders, however, have some payback of their own in mind. Especially when they stumble upon the Hood's real identity! Cover price $3.99. 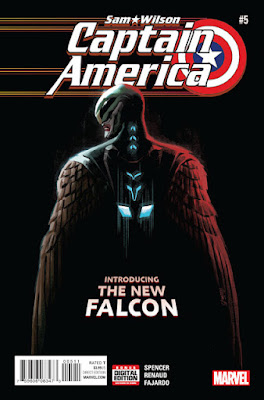 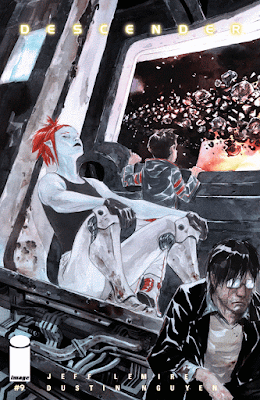 Written by Jeff Lemire. Art and Cover by Dustin Nguyen. TIM-21, Telsa and Quon arrive at the amazing hidden home world of The Robot Resistance. But will this be a haven or a prison for Tim and his companions? And what new secrets lie at the centre of the Machine Moon? Cover price $2.99. 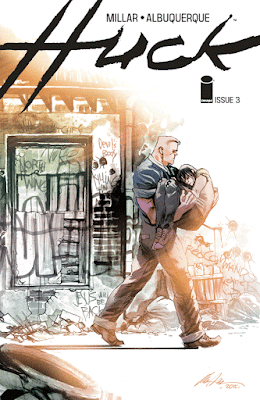 Written by Mark Millar. Art and Cover by Rafael Albuquerque. Huck takes his mission across the country, helping those in need, while powerful figures in the US establishment try to use his abilities for their own ends. Cover price $3.50. 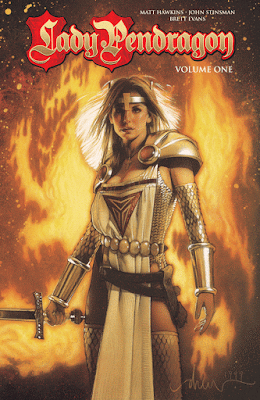 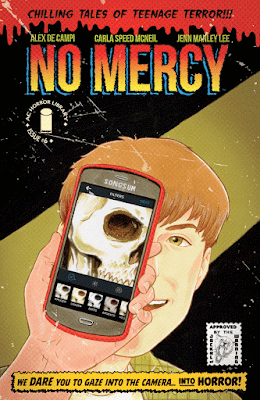 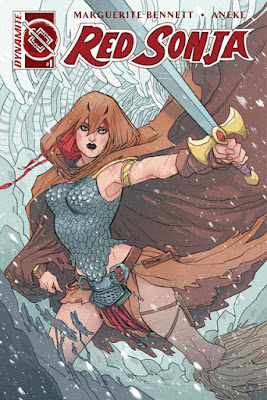 Written by Marguerite Bennett. Art by Aneke. Cover by Marguerite Sauvage. Through the plains of Hyrkania, a message sweeps through the scattered peoples of the nation. Bells ring, horns blow, voices shout - the King is dying! Red Sonja rides to save the King from his doom as the powers of Hyboria crowd around to strike when the kingdom is weakest. But a dread new power rises from within Hyrkania's own borders, bent on defending its homeland - no matter the cost, no matter what its people become. A defining chapter of the Red Sonja saga - dark, clever, vicious, and funny - as the She-Devil with a Sword must stop the rise of a brutal new regime… her own people! Cover price $3.99. 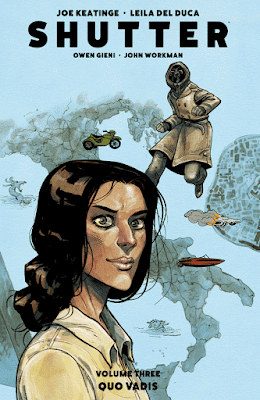 Volume 3 - 1st printing. "Quo Vadis!" Collects Shutter (2014) #13-17. Written by Joe Keatinge. Art and cover by Leila Del. Kate Kristopher was a globally renowned explorer on an Earth far more fantastic than our own. Then she wasn't. In our third volume, Kate's a world away from everything she knows as everyone she holds dear is on the road to execution. Softcover, 128 pages, full color. Cover price $14.99. Written by Evan Stanley. Art by Jim Amash & Various. Cover by Evan Stanley. 'The Silver Age.' Part 4. The finale to Silver's latest adventure! Silver simply doesn't have the might to stop the creature menacing his time. Maybe the combined brain power of Gold and Prof. von Schlemmer can help! It's a knock-down, drag-out fight for the fate of the future with a shocking ending you'll never see coming - even if you're psychic! Cover price $3.99. 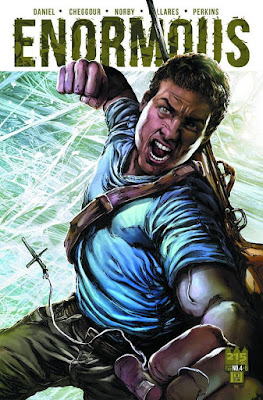 Written by Tim Daniel. Art and Cover by Mehdi Cheggour. James and Allison continue their bloody battle in the streets of Tuscon. Only in this world, you're never alone for too long. Company is coming, a lot of company. A lot of very big company. Cover price $3.99. 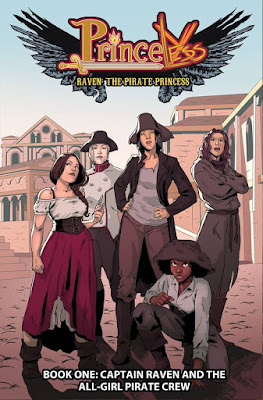 Volume 1 - 1st printing. "Captain Raven and the All-Girl Pirate Crew!" Collects Princeless: Raven Pirate Princess (2015) #1-5. Written by Jeremy Whitley. Art and cover by Rosy Higgins and Ted Brandt. Fresh off her adventures in the pages of Princeless, Raven is ready to set out on her quest for revenge against her brothers. They've stolen everything that should be hers and now she's going to get it back. But first, she needs a crew. Share the laughs, action, and adventure as Raven assembles the fearless crew of awesome ladies who will help her get her revenge. Softcover, 128 pages, full color. Cover price $14.99. 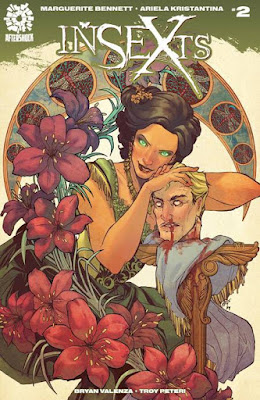 Written by Marguerite Bennett. Art and Cover by Ariela Kristantina. Free of their captor, the lovers explore their freedom, their love, and the monstrous new transformations of which they are capable. But when their thirst for revenge deepens, a sleek, vicious new predator creeps into London, threatening to destroy all they hold dear. Cover price $3.99. 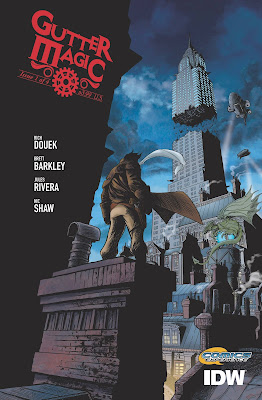 Written by Rick Douek. Art and Cover by Brett Barkley. Cinder Byrnes has been trying to lie, cheat, and steal his way into wizardry his entire life, and he's finally got the key to unlocking the power of magic. But first, he needs to stay one step ahead of the sorcerous crime lord that wants him dead. An action-packed urban fantasy tale, set in a modern New York City where World War II was fought with magic. Cover price $3.99. 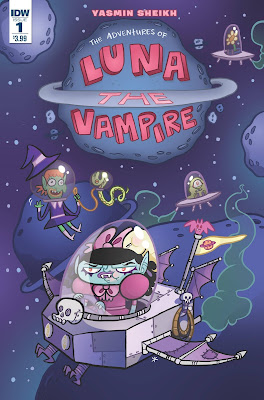 Story, Art and Cover by Yasmin Sheikh. HOLY SPACE BLAST! Ever wonder how it would be if outer space was populated by monsters? Or what it would be like to have a green ugly witch as your best friend? Then look no further! Welcome to the AMAZING everyday life of Luna the vampire. (Zombie postman and crappy job included.) Cover price $3.99. 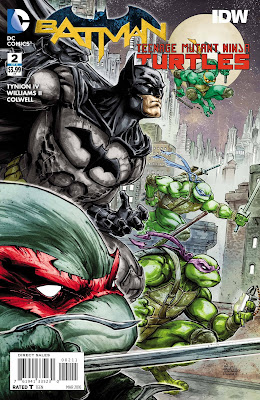 Written by James Tynion IV. Art and Cover by Freddie Williams II. Trapped in a world where they can scarcely tell friend from foe, the Turtles' first encounter with the Dark Knight puts their fighting skills to the ultimate test. And while Batman and scientist Lucius Fox search for any clue as to where these strange ninjas come from, Shredder strikes a deal with The Penguin! Co-published with IDW! Cover price $3.99. 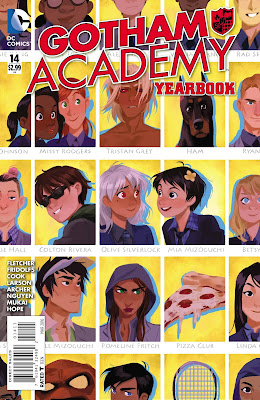 Written by Brendan Fletcher & Various. Art by Dustin Nguyen & Various. Cover by Mingjue Helen Chen. An all-new era of GOTHAM ACADEMY begins here with the four-issue 'Gotham Academy Yearbook' story! It's yearbook time at Gotham Academy, and Olive, Maps and the gang share some lost adventures from the past year. Some of the best writers and artists from comics and beyond join forces with the creative team behind Gotham City's top boarding school for this very special new chapter. Cover price $2.99. 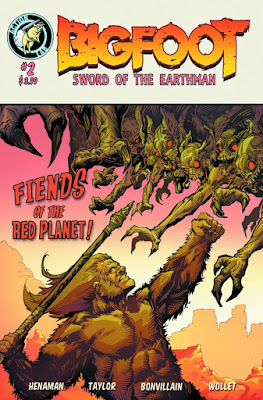 Written by Josh S. Henaman. Art and Cover by Andy Taylor and Tamra Bonvillain. The sword-swinging sasquatch is back! Issue two finds Bigfoot and his alien sidekick as reluctant soldiers of a desolate desert outpost. Their duty? Protect the innocent from the locust-like race of moth-vampires! Cover price $3.99. 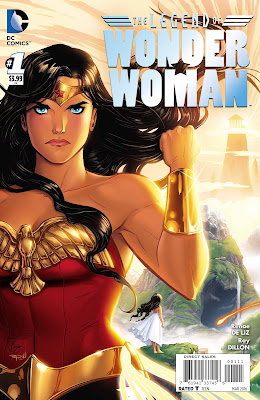 Written by Renae De Liz. Art by Renae De Liz and Ray Dillon. Cover by Renae De Liz. A new WONDER WOMAN 9-issue miniseries begins here! In the beginning there was only chaos. But Hippolyta, Queen of the Amazons, saw a better future-and eventually, her daughter would be destined to bring that new world to life! Before her ultimate fate unfolds, though, Diana of Themyscira must learn the important lessons of an Amazonian childhood! Cover price $3.99. 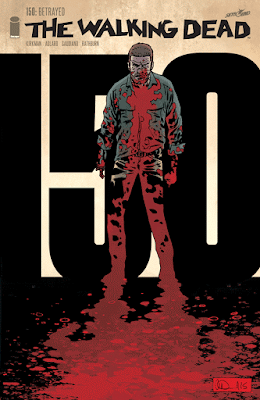 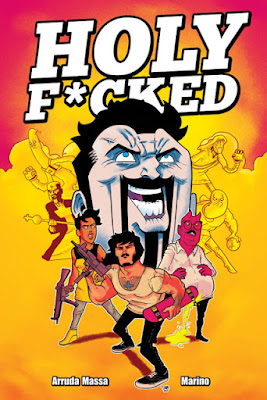 (W) Nick Marino (A/CA) Daniel Arruda Massa
Jesus, Satan, and Maria were living happily ever after until a psychotic Hercules tried to murder the messiah! Now Maria must get Satan to the hospital on time and unite the righteous might of the New Apostles to stop Herc before he can slaughter Jesus.  Collecting the maniacal mayhem of HOLY F*CKED #1-4.