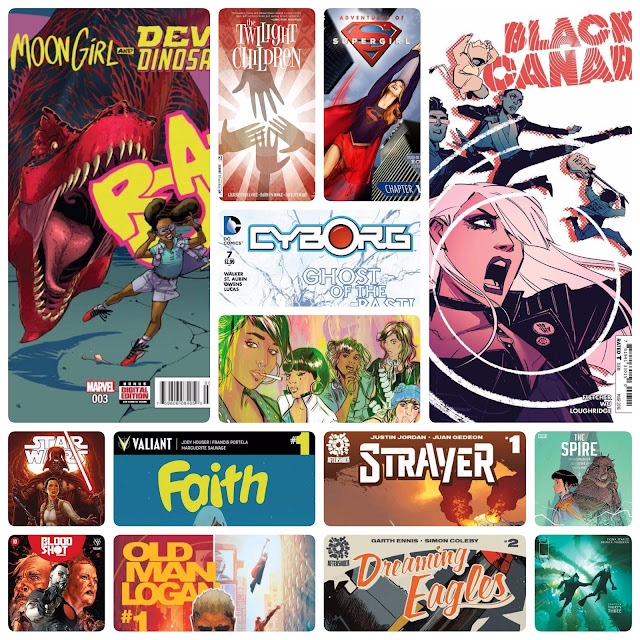 Another incredible week of comics has arrived and there's so much to choose from. First, the new #1s. Old Man Logan #1, Faith #1, Strayer #1, Adventures of Supergirl Digital First, and Ghostbusters International #1 make up some can't miss debuts. Next, the trade paperbacks if you're looking for a longer read and maybe something to totally get wrapped up in. Jungle Girl: Season 3, Lazarus: Poison Vol. 4, Princeless Book One: Save Yourself, and Curb Stomp are very different for different tastes but all equally awesome. That's just the tip of the iceberg. Check out our notable new releases and the music-infused slideshow below. Happy reading! 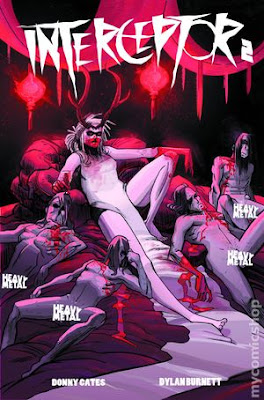 Poli (the titular Interceptor herself) and Weep (badass rebel kid) find themselves at the mercy of Sherriff Arden Reeve and the blood-drunk Baroness of the North, Matilda. Trapped in a vampire prison, surrounded on all sides and dangerously pissed off, Poli and Weep fight for survival as the fates of two worlds hang in the balance! From Donny Cates and Dylan Burnett with a variant cover from Nick "actual vampire" Pitarra (The Manhattan Projects). 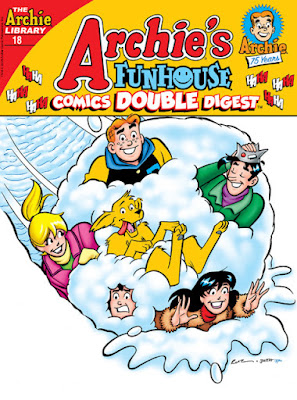 Written by Paul Kupperberg. Art by Pat Kennedy and Tim Kennedy. Cover by Dan Parent & Various. The spooky season is here again, and the gang is ready to throw an unforgettable Halloween kids charity event - and what better place to host a haunted house party than at the Lodge mansion? But once the kids' party is over, it's time for the real Halloween fun to begin! But what happens when the teens start experiencing some spooky occurrences that they don't remember coordinating for the event? See who can brave this haunted house adventure in 'Giving up the Ghost,' the frighteningly fun brand new lead story to this comics double digest! Cover price $4.99. 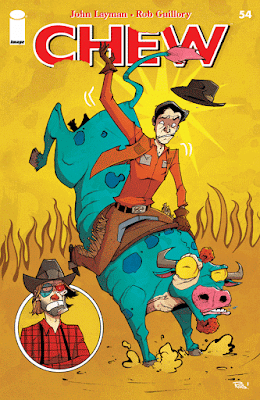 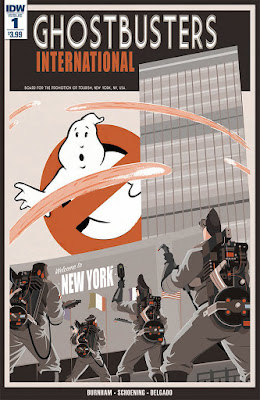 Written by Erik Burnham. Art and Cover by Dan Schoening. There's something strange in the neighborhood... and whether that neighborhood is in New York City or Venice, Italy, the Ghostbusters will be there! After a bust at the United Nations, the boys in gray are engaged to investigate an Old World haunting, where they begin to unravel a mystery that sends them around the globe (while still trying to keep their contract with the City, County, and State of New York!). Join us for the next chapter in Ghostbusters history - because you demanded it: GHOSTBUSTERS INTERNATIONAL! Cover price $3.99. 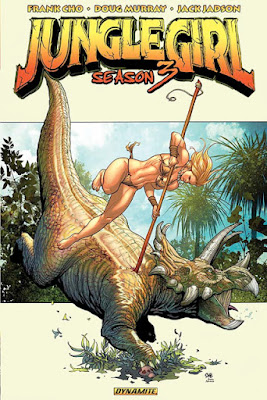 The Lost World is doomed! When a tear in the dimensional fabric opens over the forbidden God Mountain, the brave and cunning Jana must rescue her friends Togg and Mike Mize from flaming debris, stampeding dinosaurs, and bloodthirsty tribesmen. Can the intrepid Jungle Girl overcome the chaos caused by the fearsome otherworldly deities known as The Old Ones? Her only salvation, a powerful artifact of alien origin, resides within the Temple of the Dirt People... a journey that will not only lead Jana to horrors undreamt, but also to a terrible revelation about the man she loves most: her father!
Acclaimed storyteller Frank Cho (Savage Wolverine, Liberty Meadows) returns to Jungle Girl for its epic third act, co-written by Doug Murray (The ‘Nam) and featuring artwork by Jack Jadson (The Savage Hawkman)! 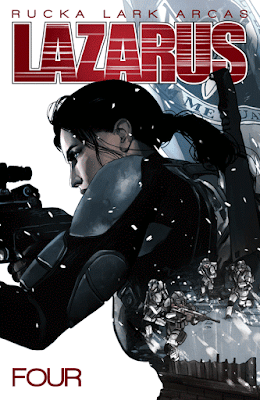 Volume 4 - 1st printing. "Poison!" Collects Lazarus (2013 Image) #16-21. Written by Greg Rucka. Art by Michael Lark. Cover by Owen Freeman. The world is at war, and Family Carlyle must fight to defend itself. With Malcolm Carlyle hovering at death's door, the siblings struggle to maintain control. But deception and war go hand in hand, culminating in a final revelation that will truly change everything for Forever Carlyle. Softcover, 168 pages, full color. Cover price $14.99. 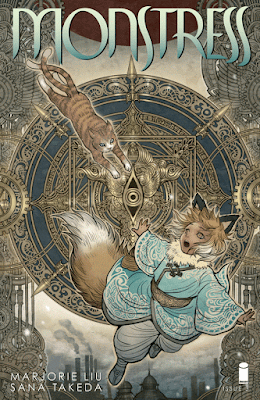 Written by Marjorie M. Liu. Art and Cover by Sana Takeda. Maika must confront the deadly secrets that live inside her. Cover price $3.50. 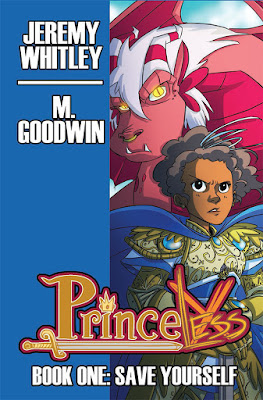 Volume 1 - 1st printing. "Save Yourself!" Written by Jeremy Whitley. Art and cover by M Goodwin. Collecting the first storyline of the critically acclaimed and Eisner-nominated series, follow the adventures of Princess Adrienne, a princess who's tired of waiting to be rescued. Along with her guardian dragon, Sparky, they begin their own quest in an all-ages action adventure designed specifically for those who are tired of waiting to be rescued - and who are ready to save themselves. Hardcover, 168 pages, full color. Cover price $24.99. 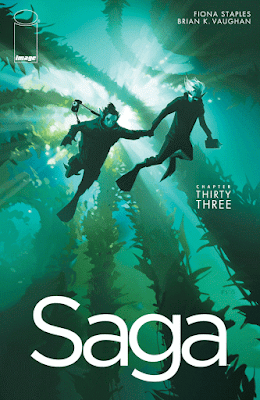 Written by Brian K. Vaughan. Art and Cover by Fiona Staples. Upsher and Doff are back on the case. Cover price $2.99. 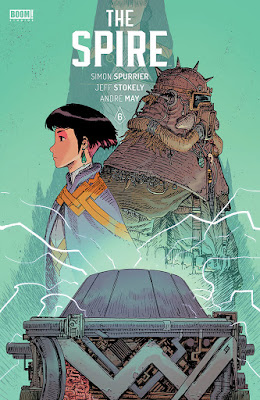 Written by Simon Spurrier and Jeff Stokely. Cover by Jeff Stokely. Meera is held by the Zoarim at their camp as part of the Pax proceedings, but she's not alone... Cover price $3.99. 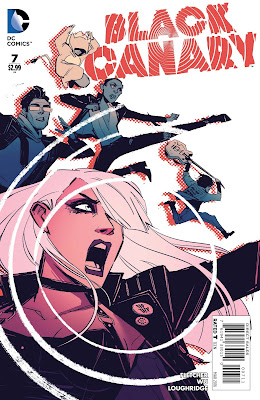 Written by Brendan Fletcher. Art and Cover by Annie Wu. It's the deafening finale of the band's debut tour! Dinah will have to scream louder than she ever has before…so loud that the walls of reality will crumble! It's gonna get crazy, folks. Cover price $2.99. 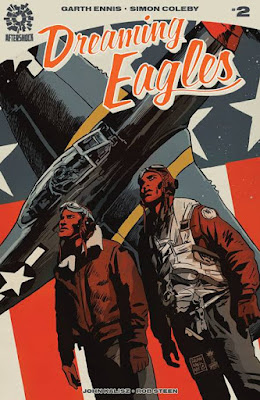 Written by Garth Ennis. Art by Simon Coleby. Cover by Francesco Francavilla. Reggie Atkinson continues the story of the Tuskegee Airmen, from their training as fighter pilots to their first combats as they fly against the German forces occupying Sicily and Italy. The men of the 99th Fighter Squadron do not lack spirit- but the opposition have years of experience and vastly superior aircraft. Reggie and Fats must fly for their lives, ever conscious of the racial bigotry that sets them apart from other American squadrons... Cover price $3.99. 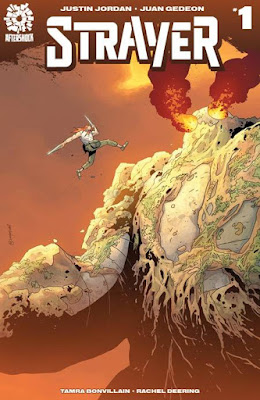 Written by Justin Jordan. Art and Cover by Juan Gedeon. The world is full of monsters. Strayer kills them, but, of course, for a small fee… Nothing is free. Mala does magic of a sort… sometimes when she wants, sometimes not… She may be the only one who can save the world and Strayer is going to help her… whether he likes it or not… From the popular creators behind the Luther Strode trilogy, Spread, and Ghost Racers. Cover price $3.99. 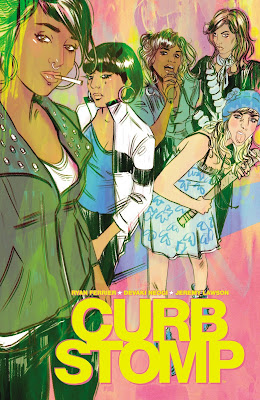 1st printing. Collects Curb Stomp (2015 Boom) #1-4. Written by Ryan Ferrier. Art by Devaki Neogi. Cover by Tula Lotay. What's to Love: Punk rock isn't dead...yet. Turf wars, breaking rules, crushing violence, and Black Flag-these are a few of our favorite things, and Curb Stomp straight-up knocks our teeth out (in a good way). It's an unflinching, visceral look at the lengths one woman will go to protect her friends, her family, and her home-perfect for fans of Rat Queens and the seminal '70s cult-favorite film The Warriors. What It Is: Three gangs. Five girls. No way out. Machete Betty leads a small gang of women under the self-appointed task of protecting their home of Old Beach, one of three boroughs surrounding a rich metropolitan city. When Betty takes the life of a rival gang member in an act of self-defense, she sets off a chain reaction of retaliation, gang warfare, and unlikely allies. It's up to the The Fever-Machete Betty, Derby Girl, Bloody Mary, Daisy Chain, and Violet Volt-to defend their turf at all costs. Collects the complete four-issue limited series. Softcover, 112 pages, full color. Cover price $14.99. 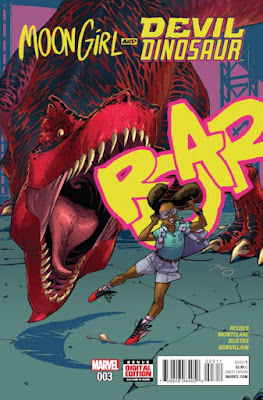 Written by Amy Reeder and Brandon Montclare. Art by Natacha Bustos. Cover by Amy Reeder. SAVED BY THE BELL! DEVIL DINOSAUR goes to school. What could possibly go wrong? MOON GIRL gets her game face on and is ready to take back what's been stolen from her! And the KILLER FOLK up their street cred! Rated T Cover price $3.99. 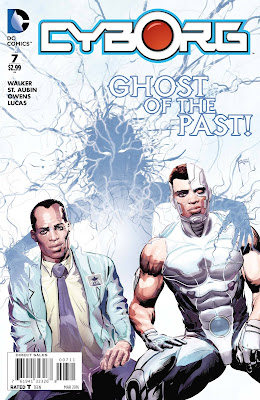 Written by David Walker. Art by Claude St Aubin. Cover by Szymon Kudranski. Following the attack of the Techno-sapiens, Cyborg must come to terms with the nanotech that makes him what he is! But in the Justice League's Red Room, Vic discovers a 'Ghost Machine'- a computer program that's strangely familiar to him… Cover price $2.99. 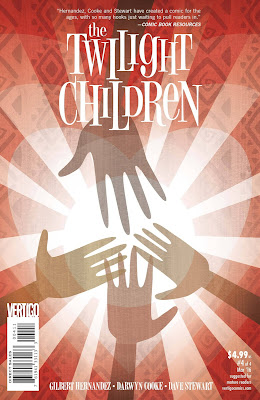 Written by Gilbert Hernandez. Art and Cover by Darwyn Cooke. The mysteries of Ela and the elusive orbs converge to create a bigger conundrum in the conclusion of THE TWILIGHT CHILDREN. The young scientist Felix, the town's sheriff, the local doctor and the rest of the cast involved in this adventure come to understand the seriousness of the danger threatening the town, and possibly the entire planet, if someone doesn't do something fast. Ela is the only hope, and she perhaps must sacrifice what she's come to love the most. Mature Readers Cover price $4.99. 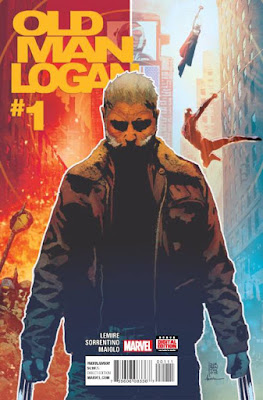 Please Note: copies of this issue (this cover) have a series of small tears on exterior edge of some pages. Written by Jeff Lemire. Art and Cover by Andrea Sorrentino. Fifty years from now, Logan -- the man who no longer calls himself Wolverine -- will have endured many atrocities: The Marvel Universe's villains will have banded together and rid the world of its heroes. Logan's closest friend, Hawkeye, will have been murdered in cold blood right before his eyes. And driven mad by the same radiation that gave him his superhuman strength, Bruce Banner will have fathered a family of hillbilly Hulks...that eventually went on to slaughter Logan's wife and two children. But now, in the present, Old Man Logan wakes up to discover himself in a world before these atrocities, before the Wasteland. And he's going to seize this opportunity and change history to ensure that his future never comes to pass... Parental Advisory Cover price $4.99. 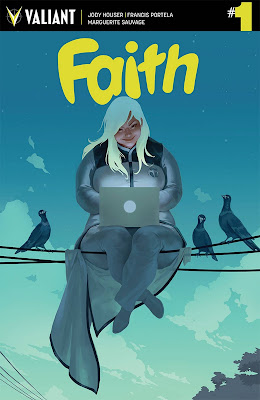 Written by Jody Houser. Art by Francis Portela and Marguerite Sauvage. Cover by Jelena Kevic-Djurdjevic. FAITH BEGINS! VALIANT'S MOST DEMANDED HERO STEPS OUT OF HARBINGER…AND INTO AN ALL-NEW ADVENTURE! Faith Herbert, the psionically gifted 'psiot' known as Zephyr, has been a neglected child, a pawn of the Harbinger Foundation, and a washout with the government superteam called Unity. But now she's taking control of her life and becoming the hero she's always known she can be - complete with a secret identity, a codename, and a cover assignment that routinely throws her into harm's way! But flying solo is going to be tougher than she ever thought as she uncovers a deep-rooted alien conspiracy that could destroy human civilization from the inside out! Is Faith out of her depth…or in for her biggest adventure yet? Cover price $3.99. 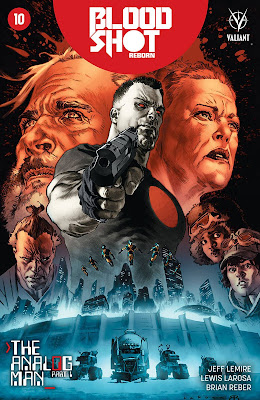 Written by Jeff Lemire. Art and Cover by Lewis LaRosa. ALL-NEW ARC! ALL-NEW JUMPING-ON POINT! WHO OR WHAT IS… 'THE ANALOG MAN'? Many years from now, Los Angeles has become a post-apocalyptic wasteland and the once unstoppable killing machine known as BLOODSHOT has become THE ANALOG MAN. Hopelessly outdated, Bloodshot's taken on a new role as the protector of a small town, eking out a subsistence existence with the great love of his life - Magic - and protecting a group of stragglers who've weathered the storm. But when a gang of marauders arrives, the settlement's survival is threatened, and Bloodshot is forced to bring justice to the distorted and disjointed badlands of the Valiant Universe! Cover price $3.99. 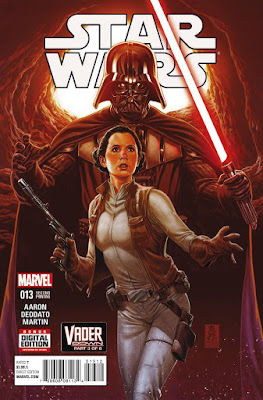 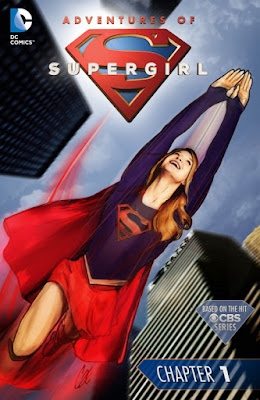 ADVENTURES OF SUPERGIRL Chapter 1 Written by Sterling Gates Art by Bengal Cover art by Cat Staggs Published by DC Comics Release Date: Monday, January 25, 2016When an escaped prisoner from Fort Rozz interrupts a football game, Supergirl is on the scene to take her down. But Rampage is mad about more important things than a sporting event-and no pesky superhero can stop her quest for revenge!