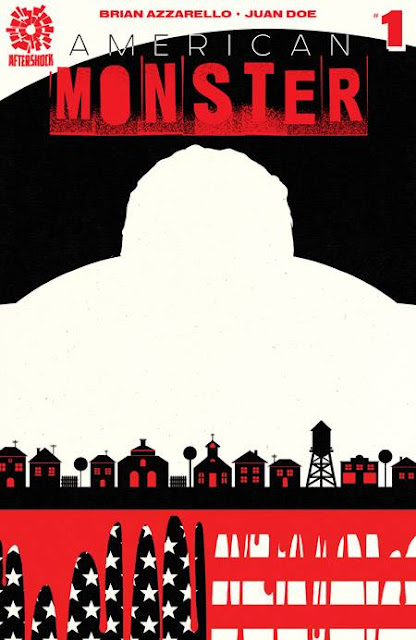 If you're familiar with Brian Azzarello's work you know besides his wonderful mainstream work, his relaunch of Wonder Woman was epic, he likes to embrace his dark side. In his creator-owned comics, Azzarello enjoys examining what makes people do horrible things to each other and then puts them on display for the world to see while he laughs maniacally behind a keyboard somewhere, I assume.

Making his first title for the up-and-coming publisher AfterShock Comics, Azzarello is given free reign to create some gritty magic with 'American Monster.' It's another smart move by AfterShock who's been adding one big name after another to their stable of creative talent. It's like a fantasy team of the industry's best and brightest. Not surprisingly Azzarello and artist Juan Doe deliver a great first issue.

The book is about more than one thing and ultimately an expansive look at this small Midwestern town where the characters we meet aren't all that likable and either in outright danger or its just bubbling at the surface. The thugs who kidnap a married couple in a financial deal gone wrong reveal no one is clean. It turns into a bloody mess from the moment they break into the home and visciously punch the wife in the face.

Elsewhere, a group of kids hanging out on a playground appear innocent enough until it's not. Here is where Azzarello shows off a great sense of timing and pacing that elavates the shocking reveal. A girl on a see-saw is going up and down. She's conversing with friends. It all seems fine- wait, what did she do that for? Something seemed off- who's that guy? And Juan Doe, as he does throughout the issue, soaks the scene in dark colors, resulting in a menacing undertone of unease as we watch these kids in what should be a safe situation but is anything but.

At the center of the issue is the mysterious man with a scarred reddish face who blows into town. He comes across some obnoxious idiots at a rapair shop but appears stuck in town for a while. A war vet who doesn't appreciate the kindness of strangers but his time in the military gets a flashback. Again Dow does a great job of painting these scenes from a different palette. Black, brown, hazy sandy colors transport the reader back to the frontline of the war. We're not sure of his motivations just yet but he's certainly got the attention of the townsfolk.

'American Monster' allows us the chance to spend time in the dark scary regions of Azzarello's mind and it's gripping and irrestible to look away at even the most uncomfortable scenes. In Juan Doe, he's found a kindred spirit who loves to wallow in humanity's filth by framing this world in heavy lines, unique layouts, and bold designs. Who is the monster in the title? The thugs? The scarred man? Or is it Azzarello himself? I don't know but I can't wait to see more of this thrilling new series.
Email Post
Labels: Aftershock Comics American Monster Brian Azzarello comic books Juan Doe reviews