REVIEW: 'Bordertown' Skewers Immigration, Prejudices, and Brings Latinos In On the Joke 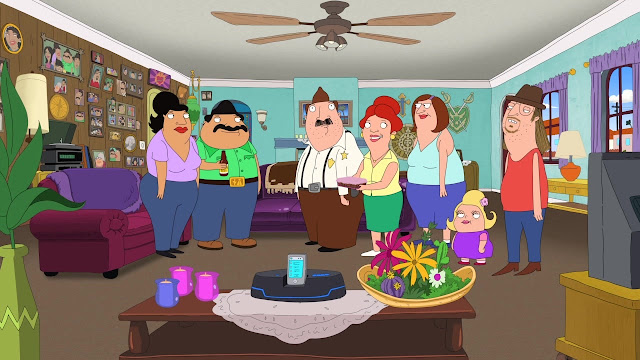 
If you're familiar with Seth McFarlane and his brand of animated sit-com humor, then you know what to expect from his latest production, the southwestern culture-clash comedy, Bordertown. Created by Family Guy veteran Mark Hentemann, the show centers around two families in the fictional desert town of Mexifornia along the U.S.-Mexico border. It's part Family Guy, part Looney Tunes, and all satire.
Bud Buchwald (Hank Azaria) is the head of one family with his wife Janice (Alex Borstein), and kids Becky (Borstein), Sanford (Judah Friedlander), and pageant toddler competitor Gert (Missi Pyle). Ernesto Gonzalez (Nicholas Gonzalez) is the patriarch of the other with a precocious toddler in Pepito (Jaqueline Pinol) and intellectual snob and liberal activist nephew J.C. (also Gonzalez).

Predictably the characters run from one extreme caricature to another. Bud is a racist, xenophobic, dimwit threatened by the changing landscape brought on by immigration. His youngest daughter is a Honey Boo-Boo-type with an inexplicable Southern drawl. Bud is a border patrol agent who's easily duped by El Coyote (Carlos Alazraqui) that turns into a funny Wile E. Coyote/Road Runner chase.  There's a running gag with a local who keeps getting abducted by aliens to be probed. In signature McFarlane fashion nothing is sacred and the humor is definitely not politically correct. The jokes come fast and often, mostly landing in a biting commentary about everything and everyone.

Bud's outlandish bigotted behavior would seem too cartoonish for television were it not for the existence of actual people online with similar viewpoints. In this divisive political climate when a presidential candidate boasts about the creation of a border wall upon being elected and the banning of people of a certain religious group from entering the country then anything pretty much goes.

Reviews have been mixed for the show many critics citing that Bud represents a sort of modern day Archie Bunker but feels derivative and too obtuse to be impactful. Again it's hard to compete with the wackos in your own timeline to differentiate from an actual cartoon character. Nonetheless, the humor is targeted at every one and not just the bitter white border patrol agent. In fact, Bud and Ernesto have to work together when J.C. returns from college and proposes to Becky.

As broad as the comedy can be, there is nuance in the smaller more subtle digs strewn throughout the episode. Yes, there is a hidden hot pepper in a taco joke that causes Bud to shoot fire from his butt but cracks about the southwest as home to "retired art teachers and meth lab entrepreneurs" and Becky's consternation over baking a cake for J.C. as it could "reinforce gender roles" broadens the scope. Skewering immigration policies in a hotly debated political landscape could have devolved into Latino stereotypes but thankfully producers smartly included Latino talent to help flesh out the Gonzalez family.

Supervising producer Valentina L. Garza, co-writer and nationally syndicated cartoonist Lalo Alcaraz, and consultant and OC Weekly editor/columnist Gustavo Arellano provide the necessary idiosyncrasies that make up the Latino experience warts and all. Ernesto may be an amiable hardworking small business owner and loving father but the generational gap between himself and his nephew is a relatable conflict for many first generation American-Latinos.

While Ernesto built his business from the ground up providing a home for his family within ten years of arriving in the U.S., the American-born J.C. seems in no hurry because "how can I get a job when monsters are trying to pass this immigration law." The pretentious and self-righteous college "egghead" says things like "if I believed in making fists I'd make one right now" and happy to feel "hetero-normative" when he sees Becky again. One character demonstrates the divide between old and new Latinos. Fellow border agent Steve Hernandez could be considered an Americanized sell-out to his culture when asked how his parents Francisco and Consuelo are doing. "Frank and Connie are fine," he says.

It's these type of situations that may have left some critics scratching their heads because it's not something that's relatable to them. There are numerous sight gags and cut-aways like the ridiculous deportation cannon, the Virgin Mary appearing on a tortilla who then mugs an offended J.C., a take-off on Mexican variety shows, and a "Pimp My Buckle" reality show that may have gone over some heads. Something immigrant families have had to overcome watching decades of American television with its own learning curve. 'Bordertown' has for the first time in animated television created an equal playing field for the perspective of American Latinos.

Is the show perfect? Of course not. No animated show in its infancy was received very well. It takes time to develop a voice, a rhythm and build an audience. As amazing as it is to see and hear Latinos on TV the show has to be consistently growing and most of all funny. After one episode some critics were writing off the show. It's premature to make such damning statements but the show is missing a likable character to latch on to. Bud is a buffoon, J.C. is pretentious, Ernesto is too bland, and the other characters haven't been developed yet. As the show continues the key will be finding distinctive engaging personalities within these characters.

For now, 'Bordertown' succeeds in being unapologetically funny and insightful with a perspective that's long been missing from animation. The show is more than about the differences between cultures but what also makes them similar. This time around Latinos are in on the joke and part of the creative process. 'Bordertown' arrives at a time when the world is polarized politically and the show can mine those issues for all its ridiculousness.