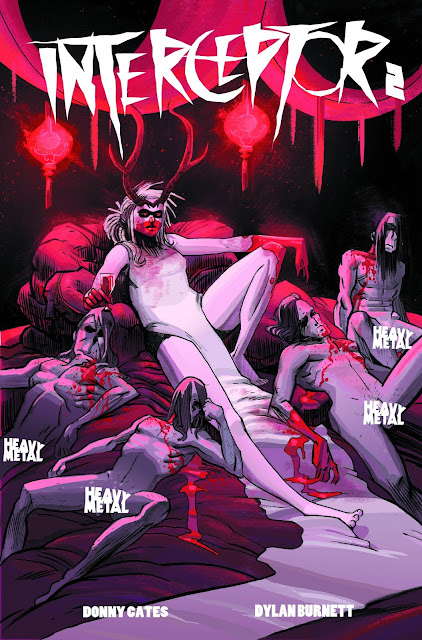 'Interceptor' #2 does what great comics should do and that's to capture your attention, wholly and without the concept of time. Issue one set up this post-apocalyptic world, an earth abandoned and destroyed by humans who fled to space leaving behind a race of vampires with surviving humans to fend for themselves. The emerging technology of the blood-suckers has the human politicos on their adopted planet nervous and send an enhanced female soldier, Poli, to do reconnaissance. Now she and a local girl, Weep, are captured and locked up awaiting their fate from the Queen vampire.

That's a lot of freakin' details but Donny Cates keeps things moving with action and fluid dialogue. The fallout of nuke'd out earth has left it devasted leaving humans and vampires fighting for control. It's a primitive landscape with humans forming a rebellion to stay outside of the grasp of the vampires who keep a cattle of humans for them to feed on. It's high concept that is vividly brutal, dangerous and fully on display. The tone is set from the opening page as naked lifeless bodies are strewn about the satiated Queen's feet.

Artist Dylan Burnett and Cates are completely in sync as they bring this story to life. Burnett's thick lines seem frenetic and urgent which adds to the anxiety of our heroines trapped in a prison full of vampires on the loose. At one point it's literally raining blood-thirsty vampires. Letterer Taylor Esposito has to put in overtime as he customizes the dialogue and caption boxes for the vamps, Poli, Weep and the screaming rebels. It's another visual touch that makes reading 'Interceptor' exciting.

'Interceptor' is determined to give you your money's worth. This is a visceral experience that drops you in the middle of the action and dares you to hold on. If Mad Max and Aliens had a baby it would be Interceptor. Cates and Burnett are giving Heavy Metal the hardcore action, sci-fi, monster, extravaganza it deserves.