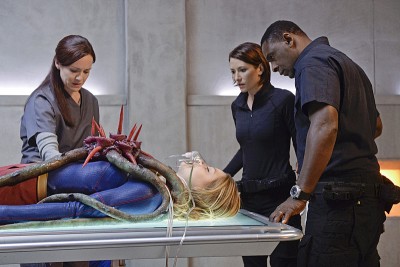 Monday night Kara (Melissa Benoist) falls victim to an alien parasite that feeds off of her while inducing hallucinations that bring her heart's desires vividly and virtually to life. "For The Girl Who Has Everything," is adapted from the classic 1984 'Superman' annual created by Alan Moore and Dave Gibbons entitled,"For the Man Who Has Everything." It was a favorite story of producer Andrew Kreisberg.

“There was something about that particular story that, to me, was almost even more resonant for her,” executive producer Andrew Kreisberg recently said. “For Superman, when it happens to him, it’s his wish for something that he never had. But for her, she wants something back that was taken from her. It really is like her stepping into this fantasy of what life would’ve been like if she had never left Krypton and had grown up there, if her parents were still alive, if she had grown into the person and the life that she wanted to lead. Again, because it’s coming at a time where she’s feeling so low about her life on Earth, it becomes that much more potent. … She’s actually getting back everything that was taken away from her and the only way out of it is to reject it. Imagine how horrible that’s going to be.”

While Kara is under the influence of the parasite called the Black Mercy, J'onn J'onzz (David Harewood) has to pretend to be her at CatCo to keep up appearances and realizes it's not that easy to work for Cat Grant.

See the previews below.


Supergirl 1x13 "For The Girl Who Has Everything" - Kara’s friends must find a way to save her life when a parasitic alien attaches itself to her and traps her in a dream world where her family is alive and her home planet was never destroyed. Also, Alex, Hank and the DEO must fend off a Kryptonian attack while Kara is out of commission, on SUPERGIRL, Monday, February 8th on CBS.