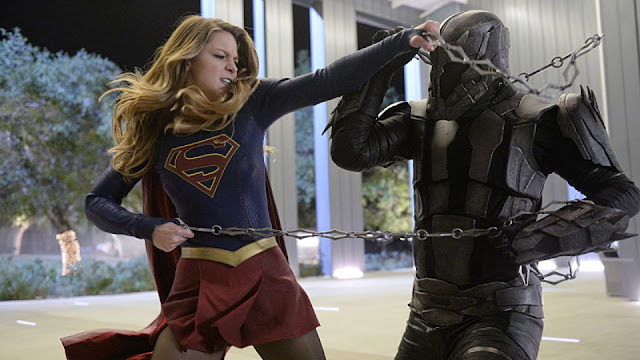 "Truth, Justice and the American Way," has been the moral code for Superman and by extension for Supergirl. In Monday's episode, Kara deals mainly in gray as she has to confront a villain whose moral code is extremely twisted. At the same time, she's keeping Maxwell Lord in the DEO secret prison denying his civil rights. It's a complicated and compelling episode that gets serious about what it means to live up to that mantra.

The big baddie this week is Master Jailer of the former Fort Rozz who's hunting down escapees and playing judge, jury, and executioner. His violent motto of “By breaking the law you have forfeited your right to exist,” begins to give Kara pause about the way she dispenses justice.

James brings it up to Kara early on. He's none too pleased about her imprisoning Lord against his will and without due process. The total disregard of Lord's rights goes against the very fabric of Superman's code of ethics, something James knows first hand. He's trying to remind Kara that as Supergirl she's held to the same standard. The fiery scene is not only the best between Melissa Benoist and Mehcad Brooks but the most authentic.

In another rare scene, James and Cat have a quiet discussion about journalistic integrity. She recalls a time as a reporter where she was convinced to write a positive piece on an actor despite his abusive behavior. She compromised herself opting for the puff piece instead of telling the truth. A move she second-guessed herself after the actor would go on to kill a woman. It's a poignant lesson from a surprising source about committing to honesty and integrity.

Surprising because in the same episode Cat is passive aggressively demoting Kara by hiring another assistant, Siobhan Smythe (Italia Ricci), to supplant her. She's still a little bitter about Kara's break-up with her estranged son. It's these type of petty office shenanigans that sometimes derails episodes this season. The whole childish back-and-forth messaging between Kara and Siobhan about James didn't serve much purpose. We all know Siobhan will become the villain Silver Banshee but this story line felt like filler.

A lot was made of Lexi Alexander directing this episode and with good reason. The Punisher: War Zone helmer brought more energy and a cinematic eye to the action scenes. The fight choreography was ambitious and thrilling but held back by a television budget. There was some inconsistency though as Master Jailer went toe-to-toe with Supergirl but gets his butt handed to him by Alex. Nonetheless, Alexander's fluid direction and visual composition elevated the feel and look of the show.

Even though the show has been wildly inconsistent in its first season, it finds moments of depth and truth that balance some of the forced narratives. In the search for justice and morality, Kara blurs the line with her stance on Lord's captivity but the deal she and the DEO make with him that sets him free rings false because, you know, he's still responsible for abducting women for his Bizarro experiments. Instead, it's used as leverage to keep his mouth shut about the identity of Supergirl. So it becomes about selective truth, bartered justice, and certainly the American way.

Here are scenes from the next episode:

Kara travels to Superman’s Fortress of Solitude in hopes of learning how to defeat Indigo (Laura Vandervoort), a dangerous being who can transport via the Internet and who has a connection to Kara’s past. Also, James’s relationship with Lucy reaches a crossroads, on Supergirl, Monday, Feb. 29 at 8/7c. Only CBS