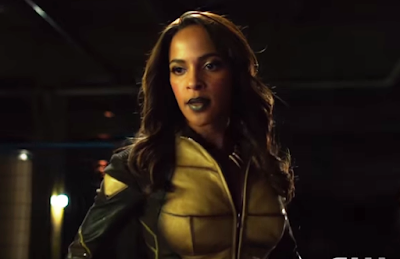 At the end of Wednesday's 'Arrow' episode we got a preview of next week's installment, "Taken," and our first look of guest star Megalyn Echikunwoke as the superheroine Vixen. When Ollie and the gang need help taking down Damian Darhk, they call in some back-up from an old ally.

Echikunwoke provided the voice of Mari McCabe/Vixen for the animated web series, 'Vixen,' a 30-minute episode rationed in 3-5 minute vignettes on CW's online channel CW Seed, and now she's doing the live-action duties. She fights crime with the aid of the Tantu Totem that allows her to wield the powers of the animal kingdom.

The cartoon was produced by the  showrunners of 'Arrow' and is considered to be part of the same universe as the television series. So when she met Ollie (also voiced by Stephen Amell) in the animated series that will be considered canon for the live-action series. Vixen's future after this guest role has been speculated to lead to either her own series or joining the time travelers of 'Legends of Tomorrow.'

What we know for sure is that the animated 'Vixen' will back for a second season on CW Seed. You can catch Echikunwoke in person next Wednesday on 'Arrow' at 8 p.m on the CW. See the preview below.