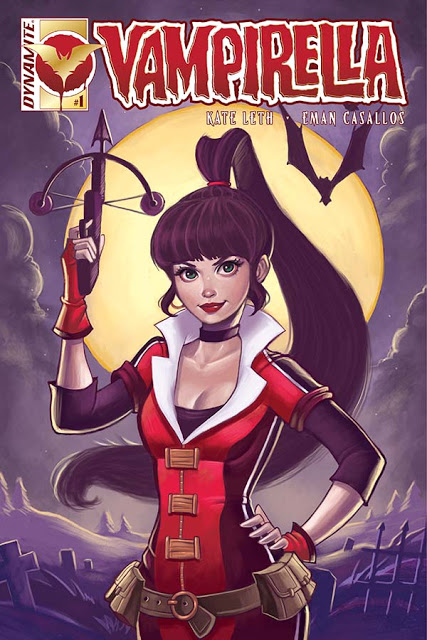 Vampirella is back! Kate Leth and Eman Casallos launch another volume of the demon-hunting vampire queen with 'Vampirella' #1 for Dynamite Entertainment. She lands in Hollywood and soon is stalked by some relentless monsters. And that's just the paparazzi and agents. A real threat emerges and it sends Vampi clubbing resulting in more trouble. This new era for Vampirella is off to a great start with a new look and a mysterious new story.

Dynamite's latest relaunch of their fearless female franchises is in wonderful hands as Leth delivers a Vampirella that is sexy, witty, and fierce. While Marguerite Bennett's Red Sonja and Frank J. Barbiere's Dejah Thoris have debuted with similar fanfare, Leth brings Vampi into 2016 with an L.A.-skewed view full of references to hipster neighborhoods, goth clubs, social media scrutiny, and Hollywood shadiness.

She and her werewolf boyfriend Tristan arrive at their new digs with man-servant Coleridge leading the way. It's not long before Vampi dons her classic and impractical collared swim suit but it's strictly to entice her man into some sexy time. She later wears a more practical costume (designed by Nicola Scott) that keeps her well covered. The former over-the-top design of her costume may be retired but Vampi still exudes a natural sexiness in her confidence and her doting on Tristan. She hasn't lost any of her appeal without the skin-baring band-aid of a costume. It's now derived wholly from her personality.

In a clever jab at Hollywood, the villain is a casting director named Slade who besides casting gullible aspiring actors to fend off real monsters under the guise of a movie set, she's determined to make Vampi's life difficult even using social media to cast her as a freak. Keeping a low profile for Vampi may not be possible as she hunts down Slade while encountering her minions along the way.

Casallos provides the proper dark and boding landscapes as well as some efficient character designs. Everything is laid out in a series of quickly-paced panels emphasizing action and movement. Valentina Pinto does a nice job of coloring the scenes with some bold splashes of color within the darkened panels. It's the type of house style fans are used to with Dynamite although at times it feels the art is at odds with the tone of the issue. Leth's script is at times light-hearted with a sense of suspense and creepiness that belies the seriousness of the images.Perhaps, we're just used to Leth being paired with artists whose more cartoony art are more in sync.

'Vampirella' #1 is full of flirty sexy wit with a new spin on hunting monsters in a social media-crazed L.A. Leth gives Vampirella a fresh fun approach complete with a new look while still fighting evil forces that surround her. This is one Dynamite relaunch that is easy to jump on and enjoy from the beginning.