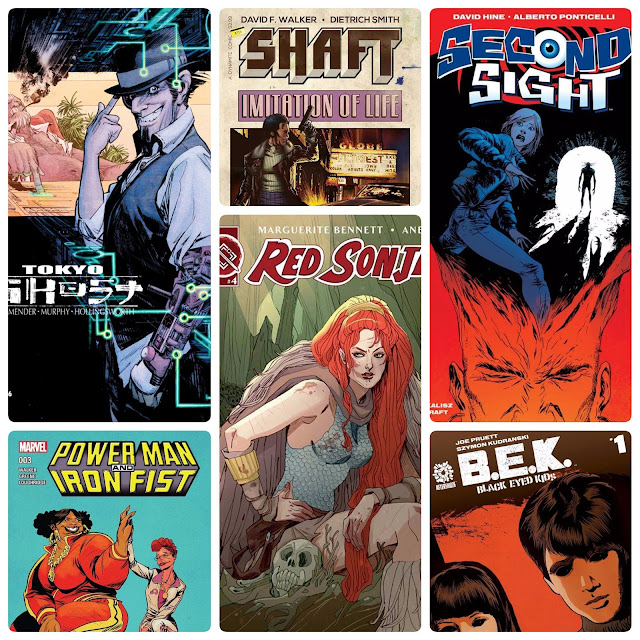 On the heels of the 2016 Eisner Award nominations, another week of great comics have arrived . The idea of awards for a subjective art form like comics seems unnecessary but there’s no denying the folks nominated are worthy of recognition. The best recognition goes on week after week with your hard earned dollars making nominated or not books your favorite reads. Check out this week's notable new releases like Clean Room #7, Princeless: Raven the Pirate Princess #7, Power Man and Iron Fist #3, Switch #3, Tokyo Ghost #6 and more. Also, check out new number ones like Aloha Hawaiian Dick #1, Joyride #1, Black Eyed Kids #1, Dept. H #1, and Star Trek Manifest Destiny #1. Happy reading! 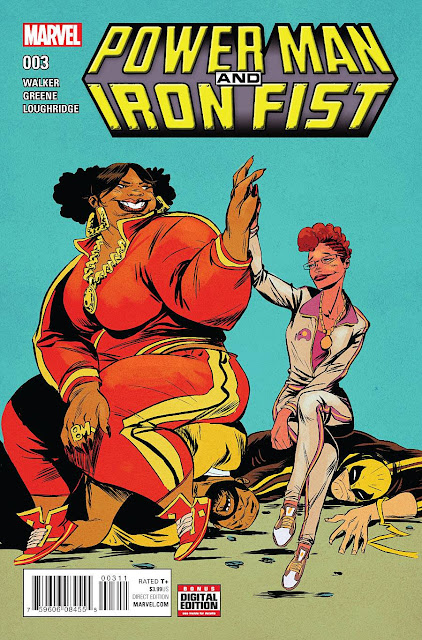 Written by David Walker. Art and Cover by Sanford Greene. BROMANCING THE STONE! POWER MAN and IRON FIST are swimming through New York City's currents of crime trying to retrieve the SUPERSOUL STONE. Beware the underworld undertow! Meanwhile, JENNIE and BLACK MARIAH's nefarious plans begin to bear fruit. With a magic-fueled crisis at its tipping point and all of New York hanging in the balance it's the perfect atmosphere to rekindle a smoldering friendship, so GET IT TOGETHER ALREADY, LUKE AND DANNY! Rated T Cover price $3.99. 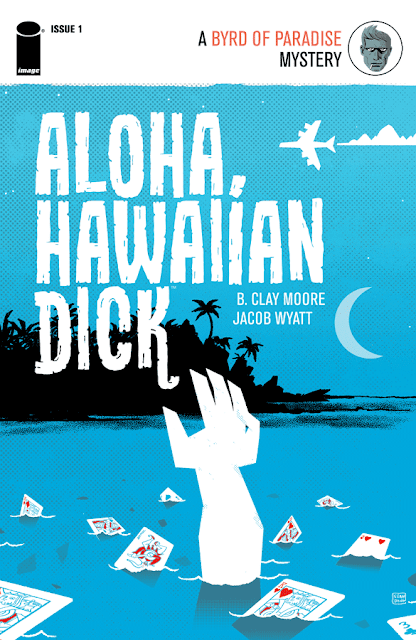 Written by B. Clay Moore. Art by Jacob Wyatt. Cover by Sean K. Dove. The critically-acclaimed tropical noir returns for a brand new series! While Byrd remains in 1954 Hawaii, we meet another Byrd back in the States, and his impending arrival on the scene is destined to change the landscape of HAWAIIAN DICK forever. Cover price $3.99. 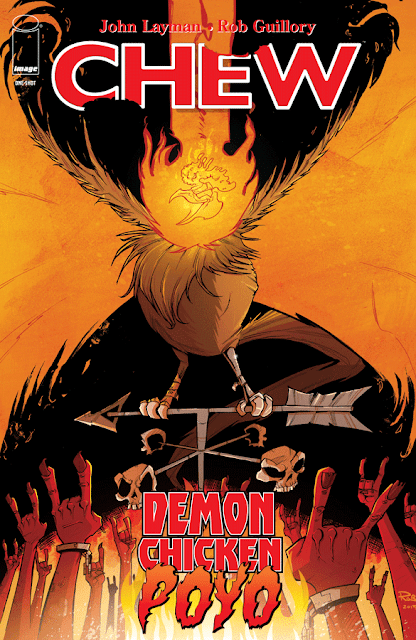 Written by John Layman. Art and Cover by Rob Guillory. The final episode of the groundbreaking and historic Poyo trilogy: DEMON CHICKEN POYO. Hell wants him. Heaven won't take him. Earth needs him. That was also the tagline for that godawful Constantine movie. But Poyo is so badass, he stole it from Keanu Reeves! Cover price $3.99. 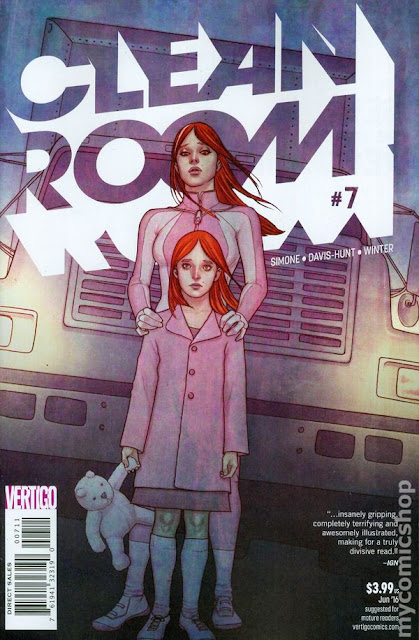 Written by Gail Simone. Art by Eric Canete. Cover by Jenny Frison. In this spectacularly disturbing standalone issue, we delve into the depths of Astrid's terrifying personal history, and why demons have haunted her since birth. With guest artist Eric Canete (Iron Man, Love Run Kill). Mature Readers Cover price $3.99. 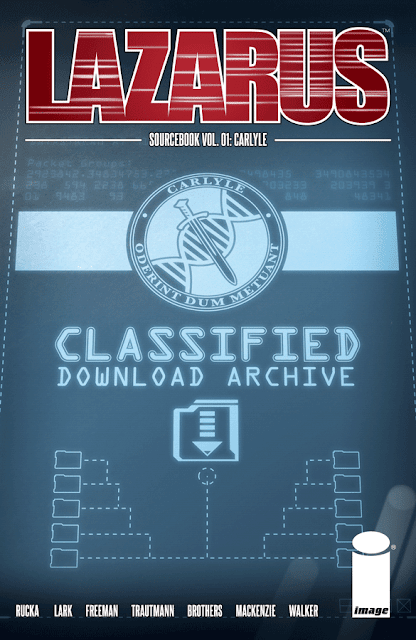 Written by Greg Rucka & Various. Art by Michael Lark and Owen Freeman. Cover by Eric Trautmann and Owen Freeman. 'Carlyle' Following the revelations of 'Poison' and leading into the bloody events of 'Cull' with LAZARUS #22 in May, a new look at the world of LAZARUS: What's it like to live life under the Carlyle regime? This is where you find out! Cover price $3.99. 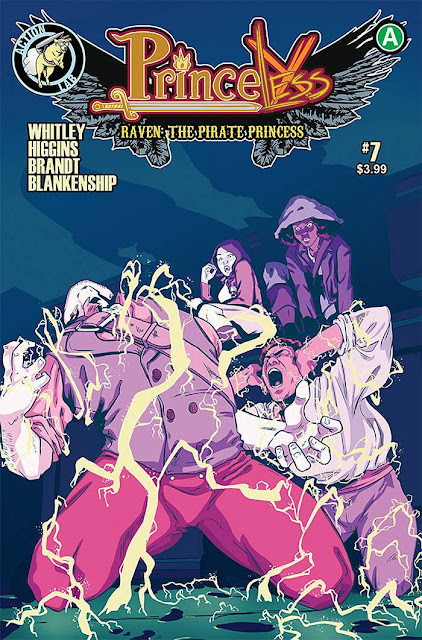 Written by Jeremy Whitley. Art and Cover by Rosy Higgins and Ted Brandt. Raven is down! Katie is out! Ximena and her team are cornered! Sunshine and her team are about to be ambushed! Now it's on the rest of Raven's crew to step up and save the day or their first adventure may be their last! Cover price $3.99. 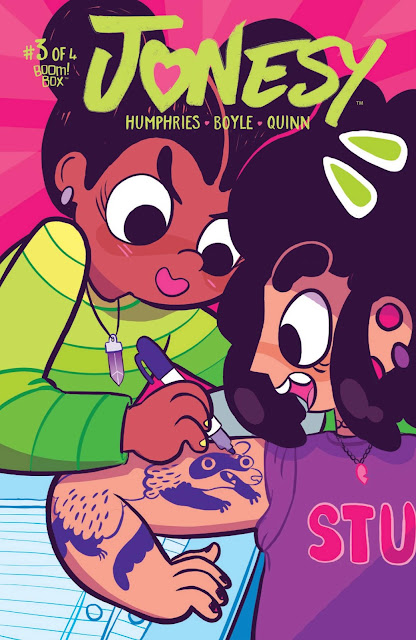 (W) Sam Humphries (A/CA) Caitlin Rose Boyle
Jonesy reeeaally wants a tattoo of her favorite anime pop idol, but when she tries to get her dad on board with the idea, she accidentally makes him want a tattoo instead! 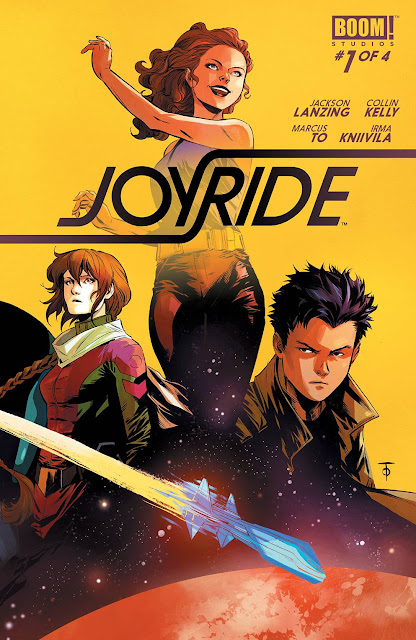 Written by Jackson Lanzing and Collin Kelly. Art and Cover by Marcus To. In the future, Earth sucks. The stars have been blocked out for so long that people have forgotten there was anything else besides the dumb World Government Alliance watching over them, training children to join the militarized Allied Youth and eliminating all resistance with a giant ray gun. Uma Akkolyte is a girl who shoots first and leaps before she looks, and when she gets a strange message from outside the barricades of SafeSky, she jacks a spaceship and punches through the stratosphere with an unlikely crew of teens who are totally not ready for what they're about to find. Cover price $3.99. 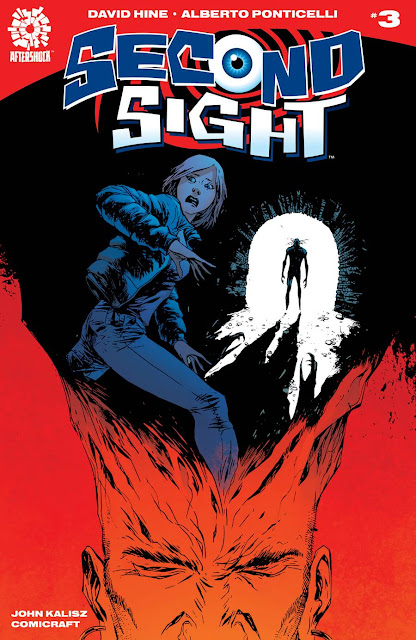 Written by David Hine. Art and Cover by Alberto Ponticelli. Ray Pilgrim's visions are becoming more disturbing and the bodies are piling up. His investigative daughter Toni is convinced if they are going to stop the slaughter her father must tell her the truth about the past and his relationship with the twisted killer known as The Reaper. Cover price $3.99. 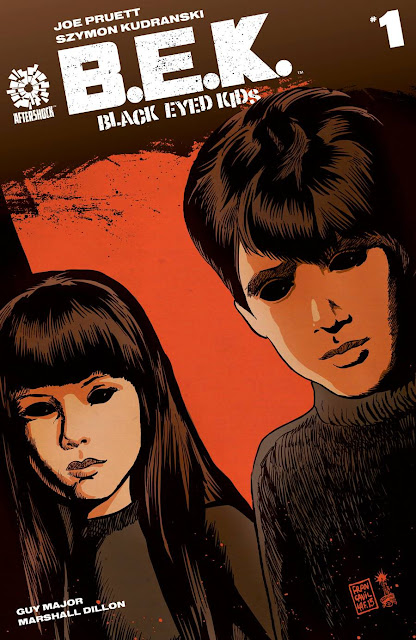 Written by Joe Pruett. Art by Szymon Kudranski. Cover by Francesco Francavilla. It's dark. You're alone. Then there's a knock. You open the door to find two seemingly normal kids. They ask to come in, to borrow your phone to call for a ride. You find yourself overcome with an intense fear that you can't explain. And then you notice their eyes... black... SOLID black. You want to run, but now they're inside. It's too late. They have you. Cover price $1.99. 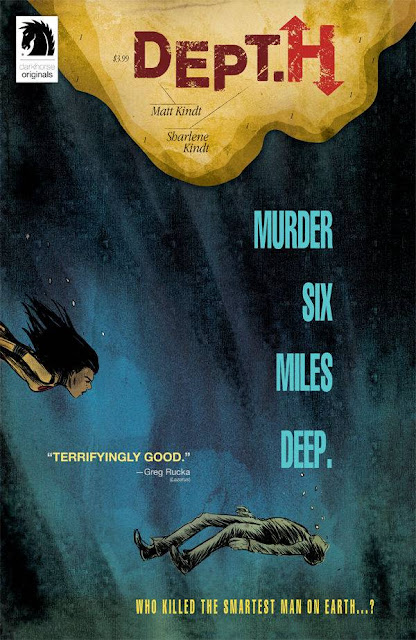 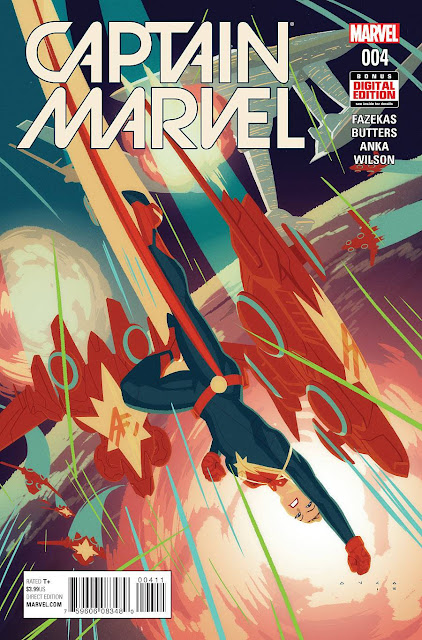 Written by Tara Butters and Michele Fazekas. Art and Cover by Kris Anka. As the situation with the Eridani delegates escalates, Captain Marvel and her crew struggle to make sense of what happened on the mysterious alien craft. But between her powers failing and Wendy's character being called into question, Carol's command of Alpha Flight is slowly slipping from her grasp. Rated T+ Cover price $3.99. 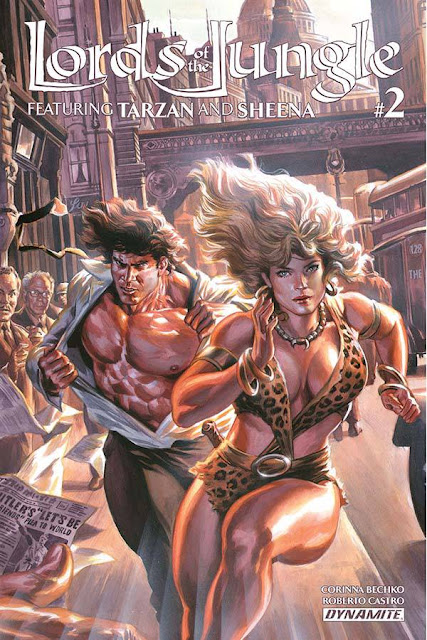 Written by Corinna Bechko. Art by Roberto Castro. Cover by Felipe Massafera. Displaced in time, lost in an unfamiliar wilderness, and beset by enemies on all sides, Sheena must search for a way home before her own jungle is destroyed. There's only one man who might have the key to her salvation, but Tarzan has problems of his own as he battles for his name and his family in London's underbelly, a place more vicious than Sheena can imagine! Cover price $3.99. 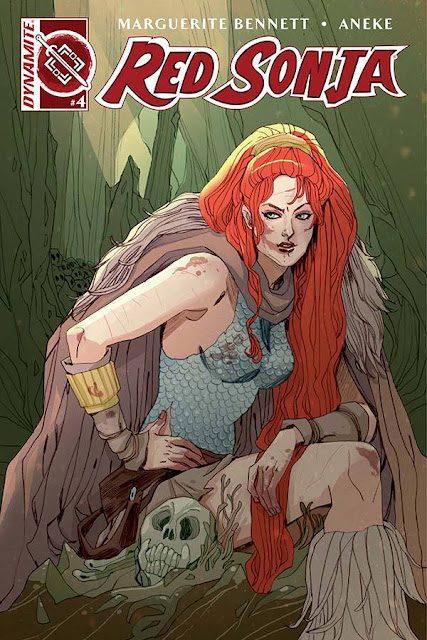 Written by Marguerite Bennett. Art by Aneke. Cover by Marguerite Sauvage. Hunted by the elite assassins of her own King, Sonja is forced to hide - even among her ex-lovers! With the aid of those from her past, she must rally a rebellion against the new despot, ending his dreams of conquest. Sonja plots a desperate gambit of her own as Hyrkania teeters on the brink of civil war! Cover price $3.99. 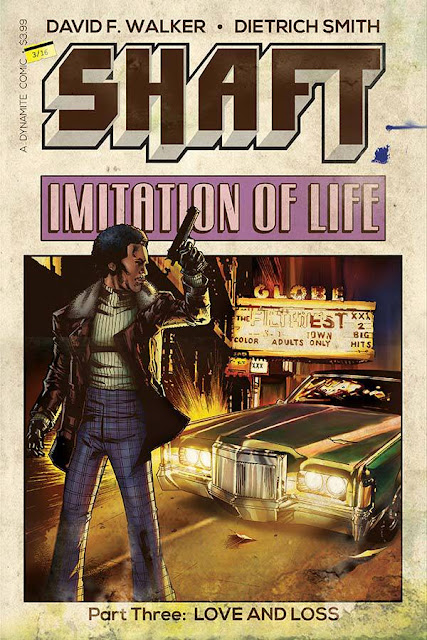 Written by David Walker. Art by Dietrich Smith. Cover by Matthew Clarke. Working as a consultant on a film proves to be more difficult that Shaft had expected. Not t to mention more dangerous. Things take a potentially deadly turn when the police bring Shaft in for questioning on an unrelated case. Cover price $3.99. 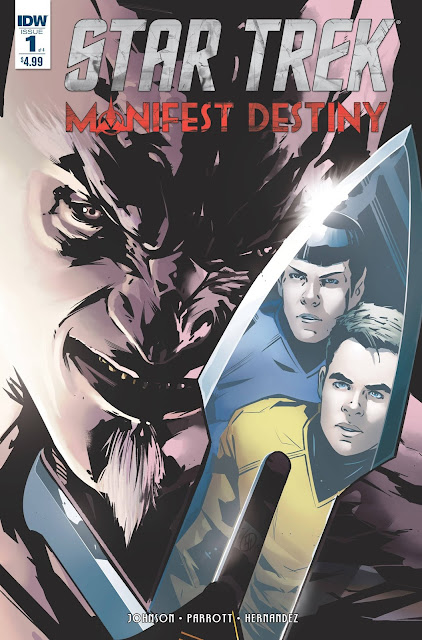 Written by Mike Johnson and Ryan Parrott. Art and Cover by Angel Hernandez. Celebrate the 50th Anniversary of the STAR TREK franchise in 2016 with this all-new bi-weekly comics event beginning in April! It's Captain Kirk and the Enterprise crew vs. the Klingons in the ultimate showdown! Art by STAR TREK/GREEN LANTERN fan-favorite Angel Hernandez! Cover price $4.99. 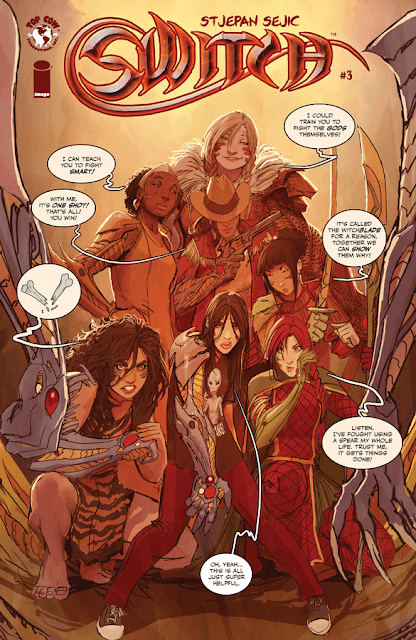 Story, Art and Cover by Stjepan Sejic. Mary finally learns what the Witchblade's world is all about as she gets pulled to the other side where she has both friends and enemies...if only she know who was which! Cover price $3.99. 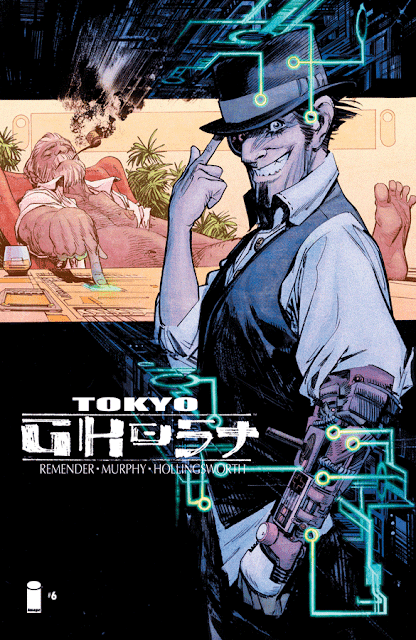 Written by Rick Remender. Art by Sean Murphy. Cover by Sean Murphy and Matt Hollingsworth. NEW STORY ARC Flak world's new CCO, Davey Trauma, is making some changes to The Isles of Los Angeles more to his suiting. How could it get any worse? You'll see. Constable Led Dent returns to his brutal beat, but he's haunted by a ghost from Tokyo. Cover price $3.99.