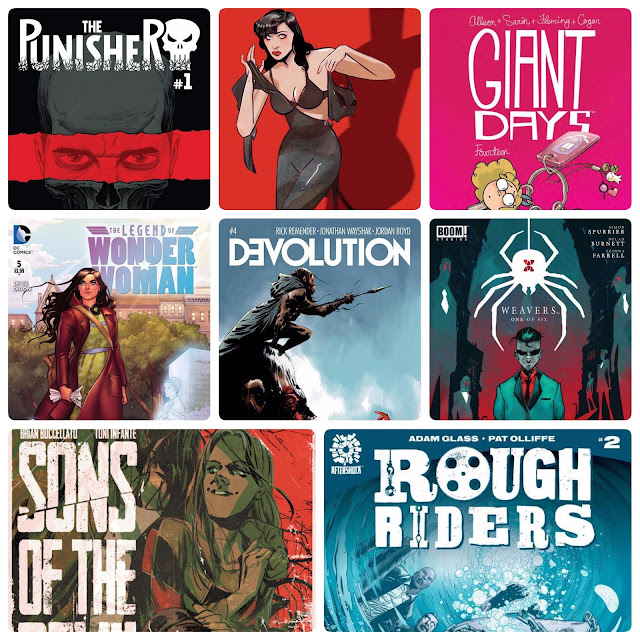 May the fourth be with you on this wonderful new comic book day. No coincidence that Poe Dameron #2 by Charles Soule and Phil Noto arrives today. Dynamite Entertainment has a great line-up this week with some great titles - King's Quest #1, Miss Fury #2, Army of Darkness: Furious Road #3, Vampirella #3, Devolution #4. Don't miss the acclaimed titles Giant Days, Descender, Sheriff of Babylon, and Midnighter. The book of the week just might be Punisher #1 with Becky Cloonan and Steve Dillon. Happy reading! 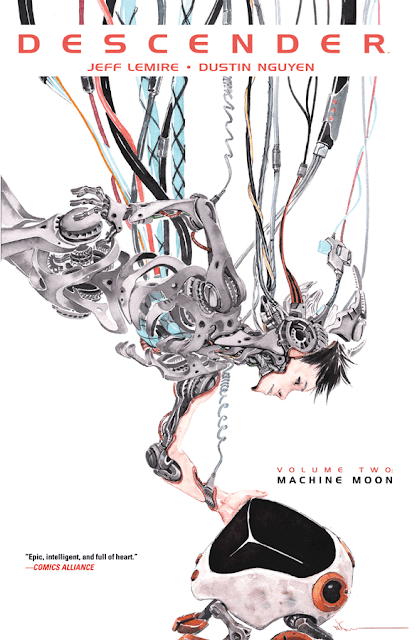 Volume 2 - 1st printing. Collects Descender (2015 Image) #7-11. Written by Jeff Lemire. Art and cover by Dustin Nguyen. Young robot boy TIM-21 and his companions struggle to stay alive in a universe where all androids have been outlawed and bounty hunters lurk on every planet. DESCENDER is a rip-roaring and heart-felt cosmic odyssey, pitting humanity against machine and world against world to create a sprawling epic. Softcover, 120 pages, full color. Cover price $14.99. 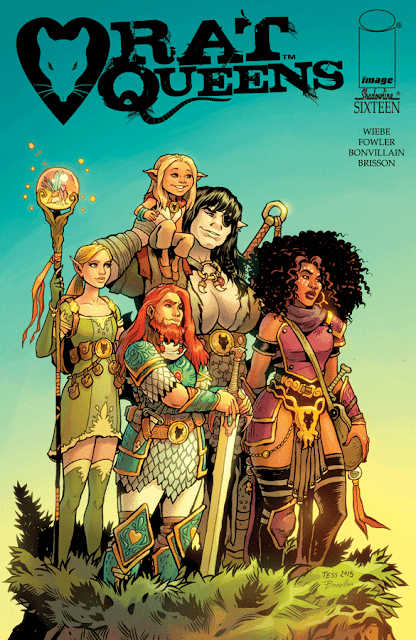 Written by Kurtis J. Wiebe. Art and Cover by Tess Fowler and Tamra Bonvillain. NEW STORY ARC 'When Beards Collide' Part 1 The Rat Queens return to Palisade to find that the world has moved on without them. The tavern is infested with would be heroes, drinking all the ale and getting in all the fights. What's a warrior girl to do? Cover price $3.99. 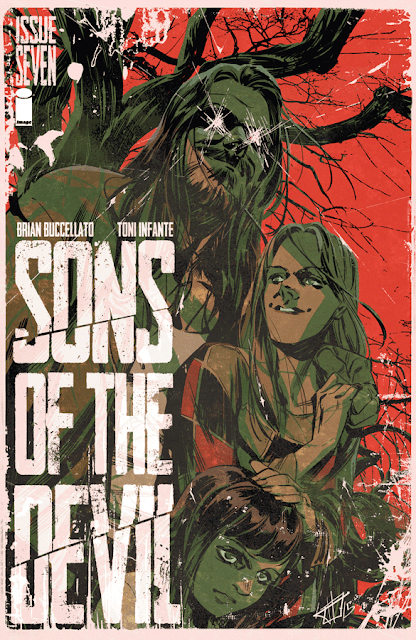 Written by Brian Buccellato. Art and Cover by Toni Infante. NEW STORY ARC 'TRUST' Travis begins his search for the family he has never known as darkness surrounds him in chapter two of the second arc. Cover price $3.99. 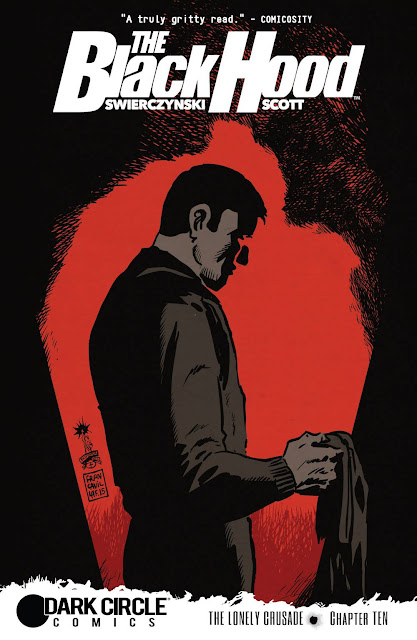 Written by Duane Swierczynski. Art by Michael Gaydos. Cover by Francesco Francavilla. 'The Lonely Crusade,' Part 4. When he donned the Black Hood, Greg Hettinger swore to keep the awful truth from those he cares about most-his partner Devon, his friend Jessie. But he's going to have to break those promises if he's going to survive the death trap that the Crusaders have prepared for him - and nothing will ever be the same. Cover price $3.99. 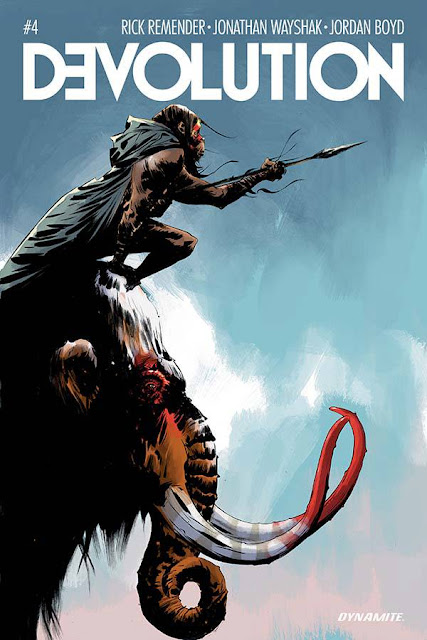 Written by Rick Remender. Art by Jonathan Wayshak. Cover by Jae Lee. Once a bastion of forward thinking and the arts, San Francisco is now anything but. Can our crew survive the home of the most savage tribe of Thralls alive and make it to the re-evolution agent? Check out the thrilling new series that Rick Remender (Black Science, Deadly Class) describes as 'a heavy dose of high-octane action, character drama, a world of strange reverse mutations, and social commentary - as we follow the last tribe of humans inoculated from the devolution agent as they set out on a desperate journey to try to find a way to re-evolve life on Earth.' Cover price $3.99. 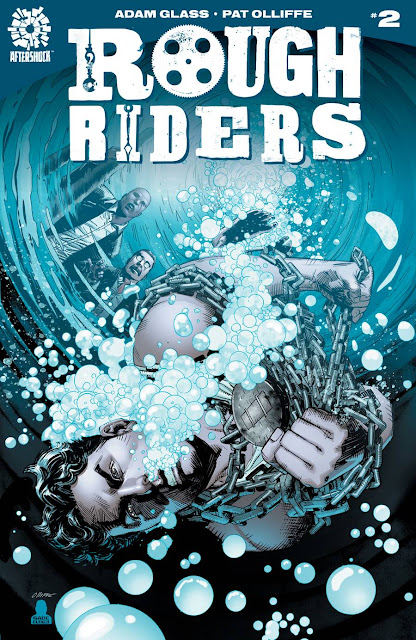 Written by Adam Glass. Art and Cover by Pat Oliffe. The year is 1898 and Teddy Roosevelt has put together an incongruous band of dissidents to battle a mysterious force in Cuba. Under the guise of the Spanish American War, Teddy and his 'Rough Riders' will try to discover who is truly behind the sinking of the USS MAINE. But as they touch down on Cuban soil, they'll soon discover that the biggest battle, they must fight is the one amongst each other. Cover price $3.99. 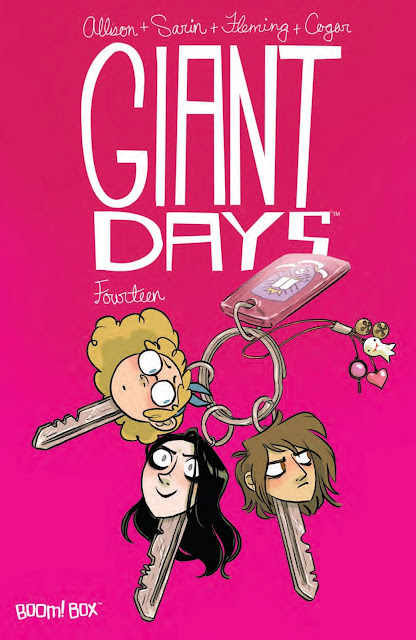 Written by John Allison. Art by Max Sarin. Cover by Lissa Treiman. Esther, Susan, and Daisy start the search for a house to rent for their second year quite late, so their options leave a lot to be desired. Cover price $3.99. 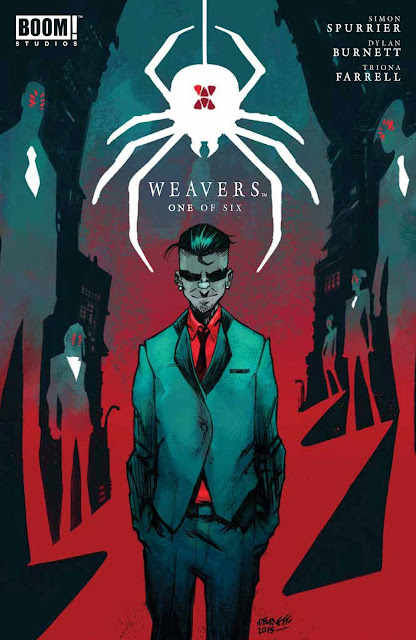 Written by Simon Spurrier. Art and Cover by Dylan Burnett. Sid, a young man with nothing going for himself, becomes an unlikely new addition to The Weavers, a brutal, East Coast crime family whose members are bound to loyalty thanks to the supernatural spider inside each one of them, granting them powerful-and often grotesque-abilities. Once he realizes what he's capable of, Sid sets out to pursue his own secret agenda, counter to the group's objectives. But he doesn't have much time-the longer the spider is inside him, the more loyal he becomes to The Weavers... Cover price $3.99. 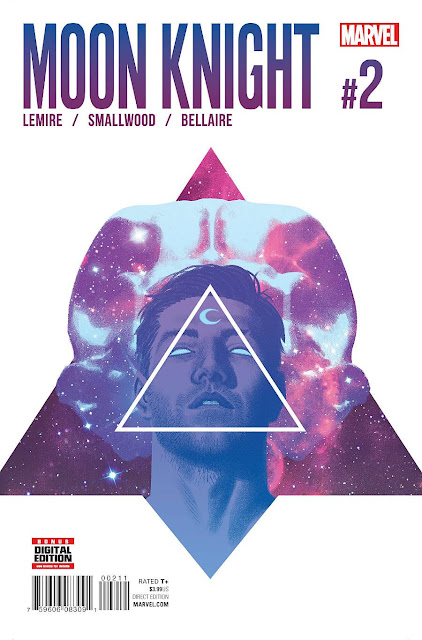 Welcome to New Egypt: Part 2 of 5 - Written by Jeff Lemire. Art and Cover by Greg Smallwood. THE ONLY WAY OUT IS DOWN! Marc Spector is in an asylum full of faces: haughty doctor, hostile orderlies, vacant-eyed patients. Or maybe those faces are actually just masks… If some of those masks hide friends, others may hide enemies, or worse…GODS and MONSTERS. The moon is out, the mask is on: it's time to escape-will Marc find a city full of sand, or something truly horrifying? Rated T+ Cover price $3.99. 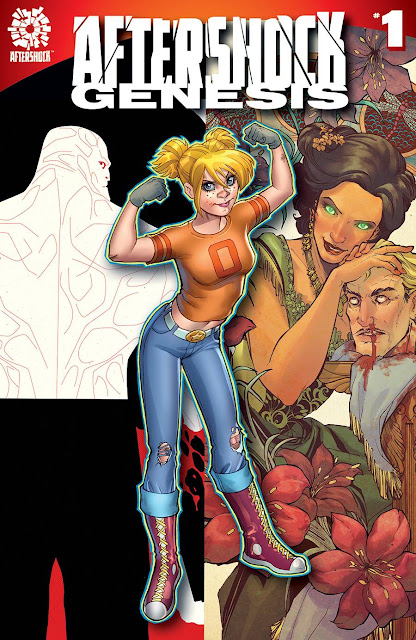 In this one special volume, readers get several exclusive items: A special ZERO chapter of PAUL JENKINS' daring NEW AfterShock series-not to be printed or seen anywhere else! An exclusive prelude to Joe Pruett and Szymon Kudranksi's BLACK-EYED KIDS series. Previews of upcoming AfterShock series from top name creators! A look back to AfterShock #1 issues that you may have missed! Just in time for FREE COMIC BOOK DAY! All of this and more in this specially low-priced issue! Cover price $1.00. 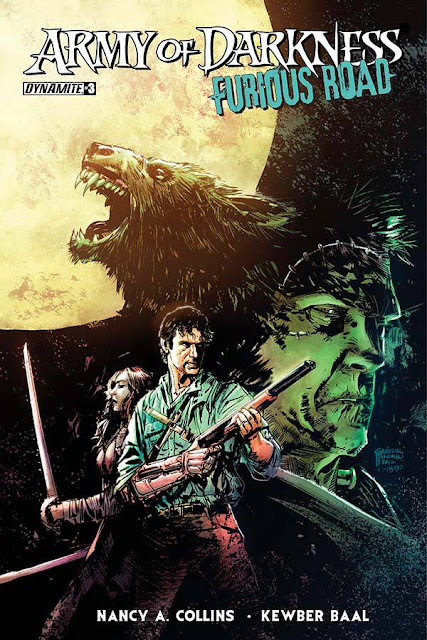 Written by Nancy A. Collins. Art by Kewber Baal. Cover by Gabriel Hardman. Ash is neck-deep in family drama when Dr. Talisha is discovered dead of an apparent vampire attack, leading to an angry confrontation between Eva, the Daughter of Dracula, and her estranged father. Can the delicate truce between the humans and their monstrous protectors withstand such bloodshed and betrayal - or is this truly the end for them all? Cover price $3.99. 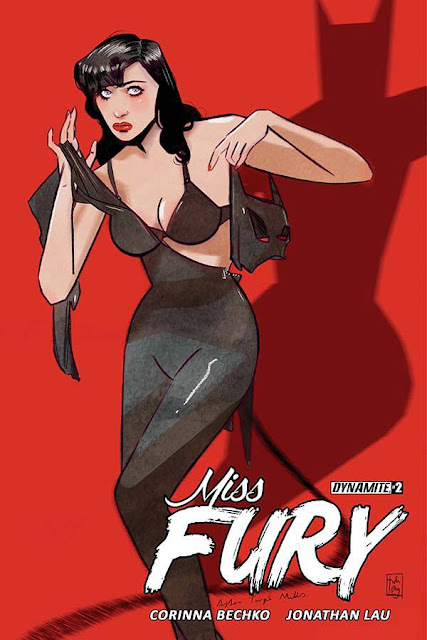 Written by Corinna Bechko. Art by Jonathan Lau. Cover by Tula Lotay. Marla is drawn deeper into the mystery surrounding the missing ship plans even as she comes to grips with her own troubled past. But who - or what - is stalking her through the snowy streets of New York? As friends are unmasked, enemies circle… leaving Marla's alter ego Miss Fury all alone to fight a foe she can barely comprehend! Cover price $3.99. 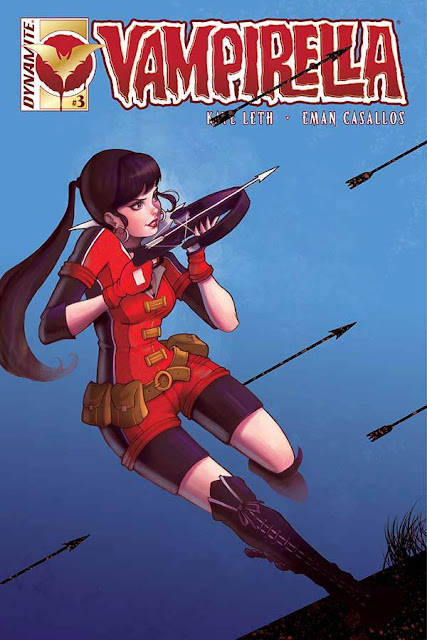 Written by Kate Leth. Art by Eman Casallos. Cover by Chrissie Zullo. Vampirella and her companions dive into research on the mysterious Slade, with no shortage of trouble in the way - from witches to taxidermy to mutated monsters on the attack, it's one hell of a week for Hollywood's favorite vampire! Cover price $3.99. 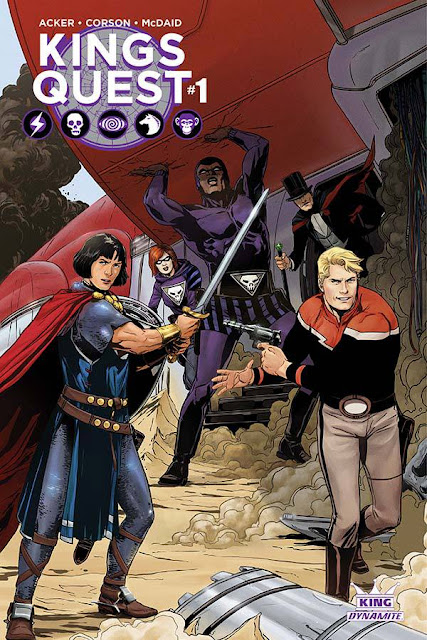 Written by Ben Acker and Heath Corson. Art by Dan McDaid. Cover by Marc Laming. THE PERFECT JUMPING-ON POINT FOR NEW READERS! Join Flash Gordon, TWO Phantoms, Mandrake the Magician, and Prince Valiant on a disastrous intergalactic rescue mission! All they have to do is defeat a limitless alien armada and NOT get eaten by a space jungle. Cover price $3.99. 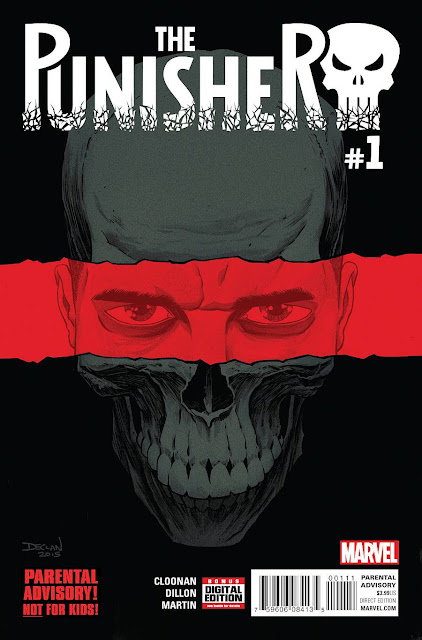 Written by Becky Cloonan. Art by Steve Dillon. Cover by Declan Shalvey. FRANK CASTLE LOSES CONTROL! A by-the-numbers drug bust is about to take Frank Castle by surprise…and he HATES surprises. The horrible fallout threatens to send The Punisher into the heart of darkness, but Castle won't make that journey alone: A DEA agent is on his trail and attempting to get into his head…but what horrors will she find there, and will she survive the experience? First-time Punisher writer Becky Cloonan and quintessential Punisher artist Steve Dillon are forcing Frank Castle out of his comfort zone and taking him to the edge of the world he thought he knew! Parental Advisory Cover price $3.99. 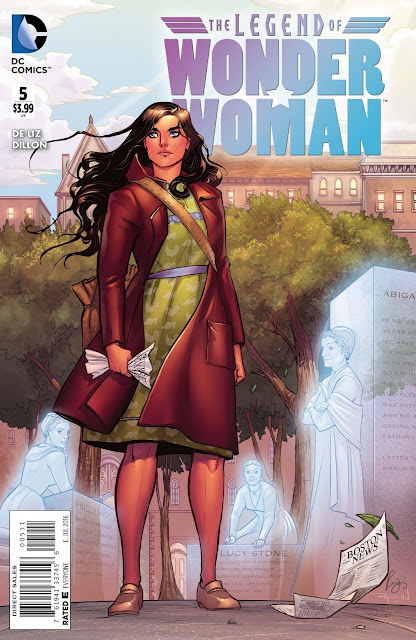 Written by Renae De Liz. Art by Renae De Liz and Ray Dillon. Cover by Renae De Liz. The Holliday Girls are off to Boston! But while the girls go shopping, Etta and Diana have more dangerous errands to run. Diana visits the newspaper that published tales of the Duke of Deception…and discovers a new mission-perhaps she can save Themyscira by saving the people of Man's World from him! Cover price $3.99. 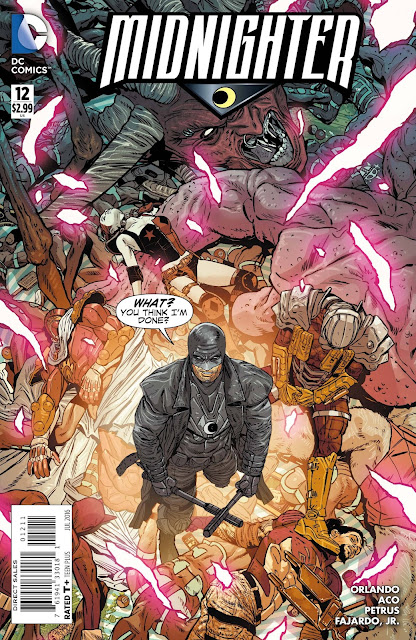 Written by Steve Orlando. Art by Aco and Hugo Petrus. Cover by Aco. Midnighter, Apollo and the Suicide Squad square off against The Unified-one of Henry Bendix's most dangerous creations! Is their combined strength enough to stop a being as powerful as Superman and as intelligent as Midnighter? Cover price $2.99. 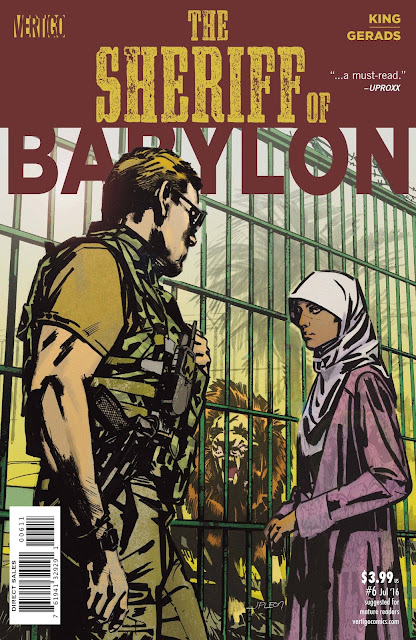 Written by Tom King. Art by Mitch Gerads. Cover by John Paul Leon. It's always hard to know for sure who is winning in a war, but for Christopher and his allies, they sure don't see a clear victory coming anytime soon. While Chris and Sofia try to deal with a personal tragedy falling out from the attack on her convoy, Nassir's enemies make another move on him and his wife-and this time the couple won't get away so easily. This all began with two dead bodies, but it's anyone's guess how many more there will be before everything is finished. Cover price $3.99. 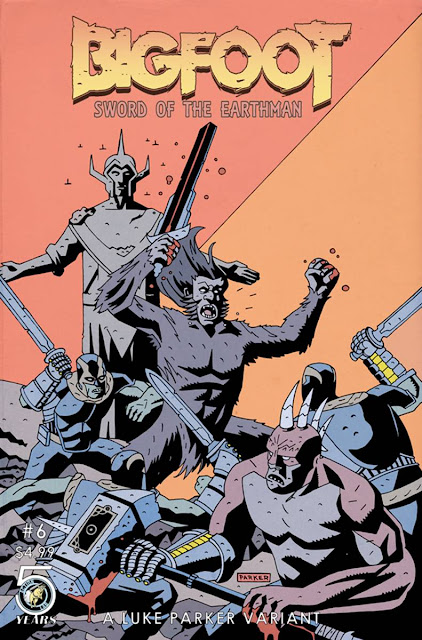 (W) Josh S. Henaman (A/CA) Andy Taylor, Tamra Bonvillain
Hunted and tortured beyond the point of exhaustion, it's one against a thousand as the "Earthman" faces the Red Demon of the Desert and the Great Lord Jeoffa's alien army. This issue ... everything ends! It's the conclusion of the ultimate sword, sorcery and sasquatch saga! Variant cover by Luke Parker! 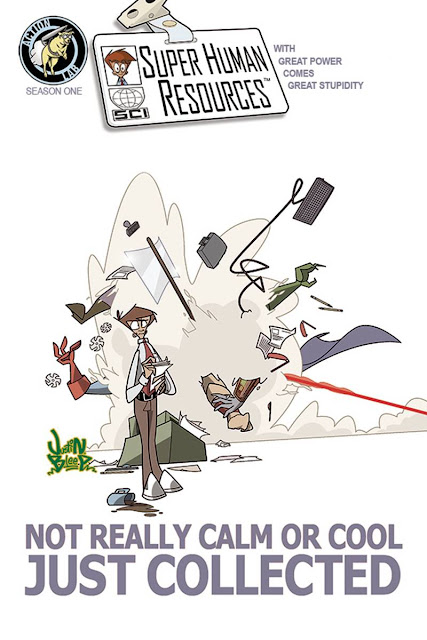 Volume 1 - 2nd and later printings. "Season 1: Not Really Calm or Cool Just Collected!" Collects Super Human Resources (2009 Ape Entertainment) #1-4. Written by Ken Marcus. Art by Justin Bleep. It's the first day of the strangest temp job Tim has ever had: in the HR department of the world's greatest super team. He discovers that with great power comes great stupidity. Reprinting Season One of the sold-out, indie hit. Just in time for Season Two from Action Lab in April. Softcover, full color. NOTE: "In a word, this book is @%#$$-funny." - Joe Kelly (Deadpool, Spider-Man, Action Comics, I Kill Giants) Cover price $14.99.