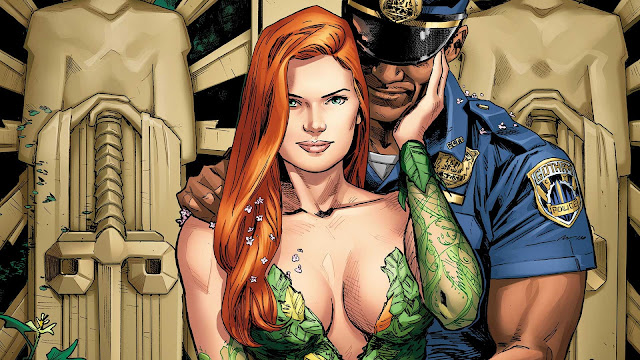 On a show that defies logic even by comic book conventions, Gotham continues to march to its own drum beat. Characters don't always follow their canonical origins but they do sometimes come back from the dead. The latest head-scratcher is the sudden departure of young Ivy Pepper (Clare Foley) and the arrival of Maggie Geha as the adult Ivy Pepper. They're not aging-up Bruce or Selina, just Ivy. Say what?

Why would they convert a child into a much older version in a show described as a Batman sequel where Bruce Wayne is still a preteen? Who knows but the obvious reasons would be to sex-up the show with a character that has traditionally used her sexuality to manipulate adversaries. This is how Fox describes the transformation.

Following an encounter with a monster from Indian Hill, Ivy Pepper finds herself reborn, and one step closer to the DC villain she is destined to become: Poison Ivy. Now a 19-year-old woman who’s harnessed the full power of her charms, she sets her sights on Bruce Wayne (David Mazouz).

"The full power of her charms," is an interested phrase. What exactly are those "charms" and just how is she going to use them on the young Bruce? Also, there's a monster that will make you into a hot redhead? Where do I sign up? It's all perfectly normal for a show that excels in being batshit crazy.

So does Ivy still have the mind of a child or does "rebirth" give her wisdom and expertise to become the eco-terrorist with a heart of gold we know from the comics? We'll find out when the Fox show returns for season three on Monday, September 19th at 8 pm.

As for the 28-year-old Geha, she's had some smaller TV and film roles on her resume like Ted 2 and Winter's Tale but certainly looks the part. I'm sure she'll do well in the role and could be a breakout performance. How she'll use her charms as a 19-year-old Ivy on the 15-year-old Bruce remains to be seen but hopefully Gotham writers will tread lightly. If that's possible.