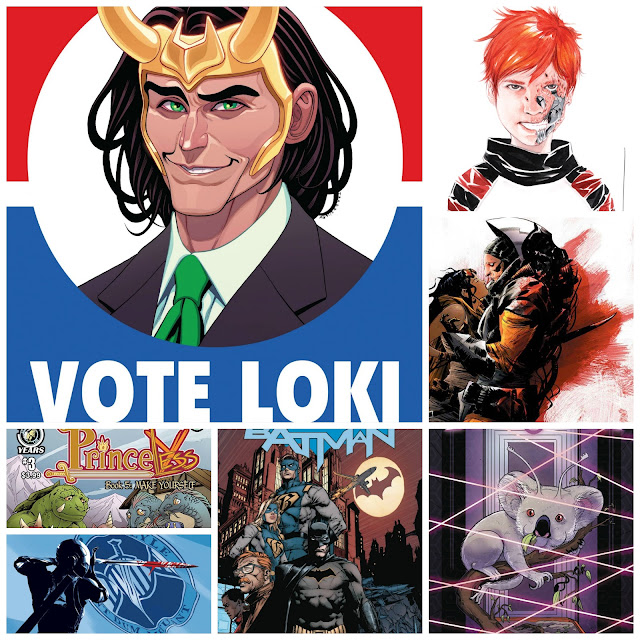 Here's something you don't hear every day - DC Comics is doing things right. 'Rebirth' titles for on-goings this week - Batman #1, Green Lanterns #1, Green Arrow #1, and Superman #1 - are actually great reads and should bring skeptical fans back to DC. Seems they're turning back the clock pre-New 52 and the result is some enjoyable adventures from top talent. Elsewhere, there's plenty of good stuff from indies too - Descender , Princeless: Make Yourself, Lazarus, The Doorman, The Spire, Devolution, Rough Riders - so if creator-owned is more your speed check these books out. 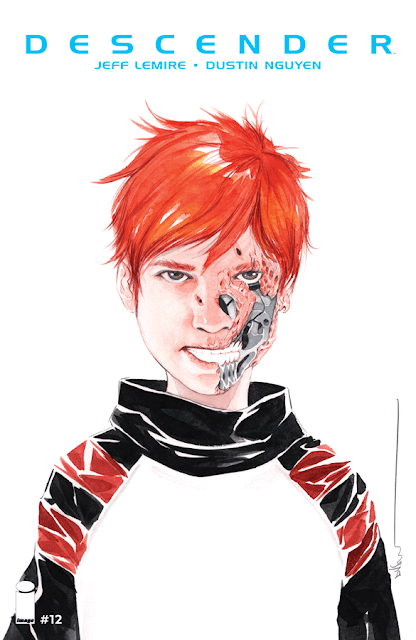 (W) Jeff Lemire (A/CA) Dustin Nguyen
NEW STORY ARC
Critically-acclaimed, best-selling DESCENDER is back with "SINGULARITIES," its next exciting arc. Learn the terrible secret origin of the vicious doppelgänger Tim-22 and what secrets shaped him into a monster. 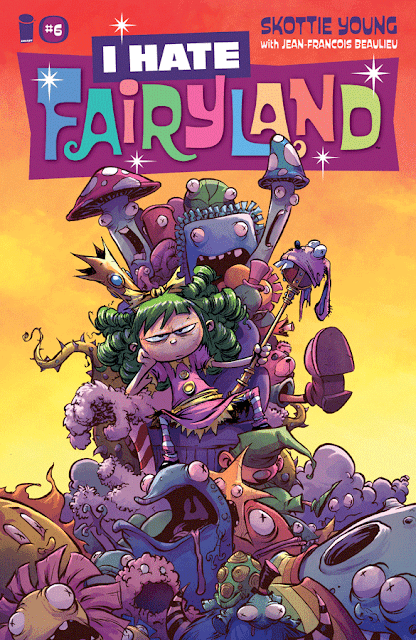 (W/A/CA) Skottie Young
NEW STORY ARC
The hit comedy I HATE FAIRYLAND is back for a second round of adventure. What will become of Fairyland as Gert is crowned the new queen and how will that affect her thirty-year quest to return home? 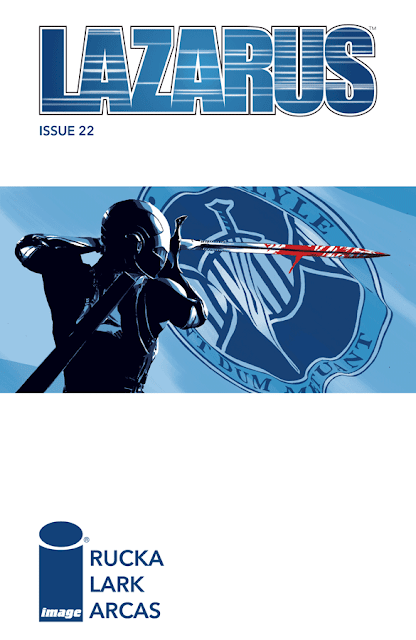 That's fourteen too many.

The time has come for the cull. 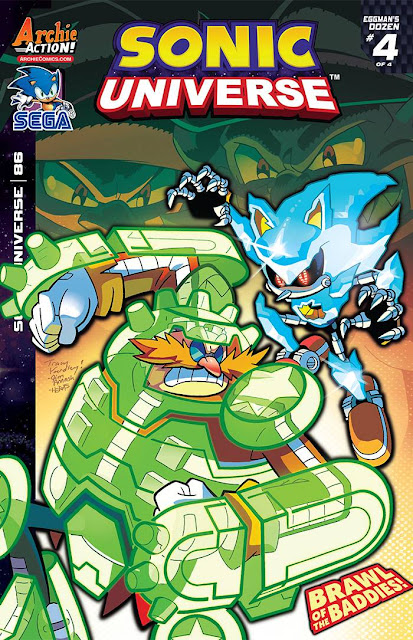 (W) Ian Flynn (A/CA) Jim Amash, Tracy Yardley
It's the end for Eggman in "Eggman's Dozen" Part Four: The final, frantic fracas is here! Dr. Eggman and his Egg Bosses square off against the Naugus Twins and the fearsome Crystal Sonic! Will everyone make it out of the battle alive?  And who is the twelfth and final Egg Boss? All the action and answers are here! Featuring cover art by Mr. Sonic comics, Tracy Yardley and a "Baddie Bunch" variant by the radical Ryan Jampole! 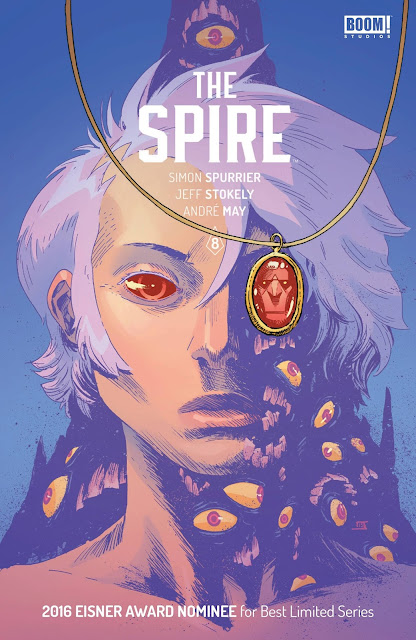 (W) Simon Spurrier, Jeff Stokely
Oversized final issue featuring 28 pages of story! The killer's identity and the truth behind the Pax 30 years ago are both revealed. 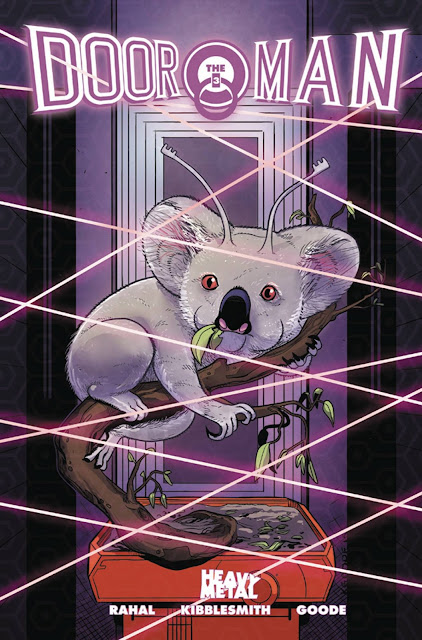 (W) Eliot Rahal, Daniel Kibblesmith (A/CA) Kendall Goode
Space has officially hit the fan. A mysterious new ally needs The Doorman and Detective Flower to pull off the heist of their lives. Unless their enemy's sexy secret weapon rips them to shreds first. Caught in between: one koala who holds the key to the galaxy's biggest cover-up. 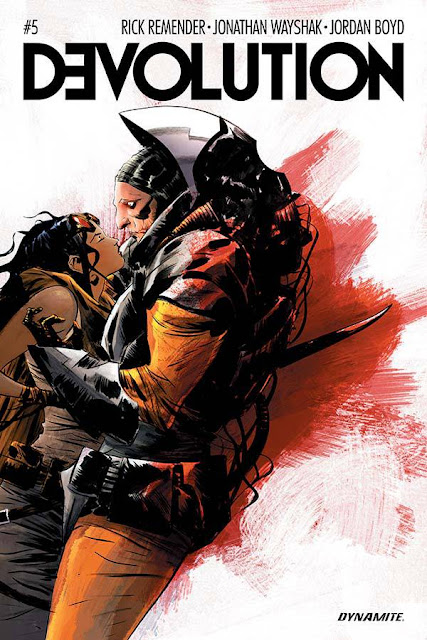 (W) Rick Remender (A) Jonathan Wayshak (CA) Jae Lee
The last humans on Earth face Neanderthal hordes and the bastards who started this whole mess. Can there be a solution? A death. A compromise. A lie. The big twist comes. Check out the thrilling series finale from Rick Remender (Black Science, Deadly Class), self-described as "a heavy dose of high-octane action, character drama, a world of strange reverse mutations, and social commentary - as we follow the last tribe of humans inoculated from the devolution agent as they set out on a desperate journey to try to find a way to re-evolve life on Earth." 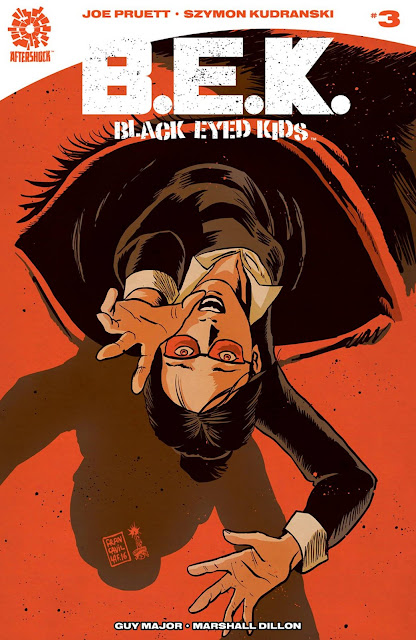 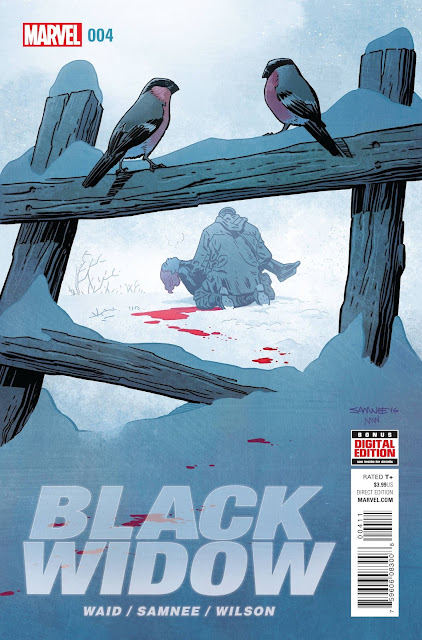 (W) Chris Samnee, Mark Waid (A/CA) Chris Samnee
THE SPY WHO WENT INTO THE COLD
•  Nearly dead after her last mission, Natasha struggles to complete her latest assignment from the Weeping Lion.
•  But she'll get by with a little help from old friends...although old enemies lie in wait.
•  She must recover the missing files from the Red Room by infiltrating its newest incarnation...the Dark Room.
Rated T+ 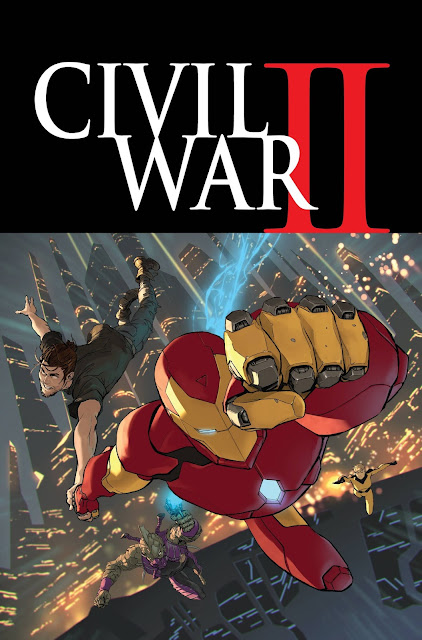 (W) Brian Michael Bendis (A) David Marquez (CA) Marko Djurdjevic
Two issues in one month? Hell yes! As the Marvel Universe reels from the events of the first issue, Tony Stark decides to take matters (and the law) into his own hands and declares war on the Inhumans. But not everyone agrees with Tony's perspective and they are willing to die trying to stop him.
Rated T+ 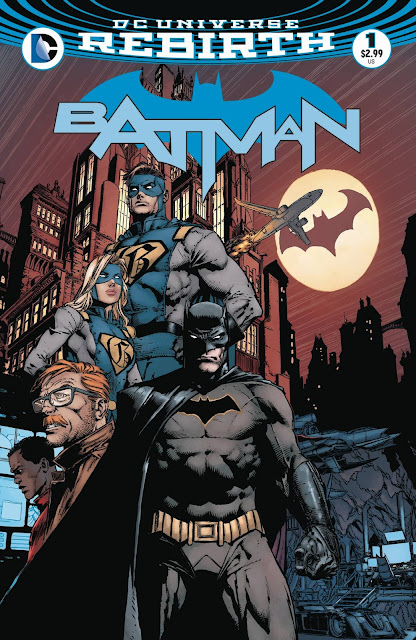 (W) Tom King (A/CA) David Finch, Matt Batt Banning
"I AM GOTHAM" chapter one
No one has ever stopped the Caped Crusader. Not The Joker. Not Two-Face. Not even the entire Justice League. But how does Batman confront a new hero who wants to save the city from the Dark Knight?
CAN'T MISS: Superstar artist David Finch returns to Batman alongside writer Tom King for this five-part storyline. 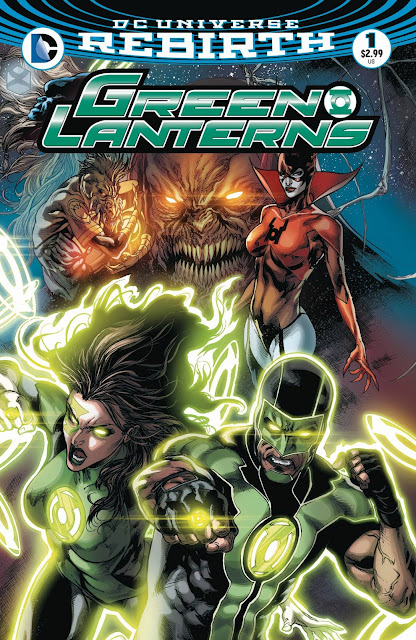 (W) Sam Humphries (A) Robson Rocha (CA) Robson Rocha, Joe Prado
"RED PLANET" chapter one
New Lanterns Jessica Cruz and Simon Baz promised to protect others in brightest day or blackest night, but as "Red Planet" begins to rise, the partners find themselves confronted with a unimaginable threat from Bleez and the Red Lanterns!
THEY SAID IT: "I am psyched for GREEN LANTERNS!" says writer Sam Humphries. "Myself, Simon, and Jessica are all new to the DC Universe. We're gonna have a blast exploring it-if we don't destroy it first." 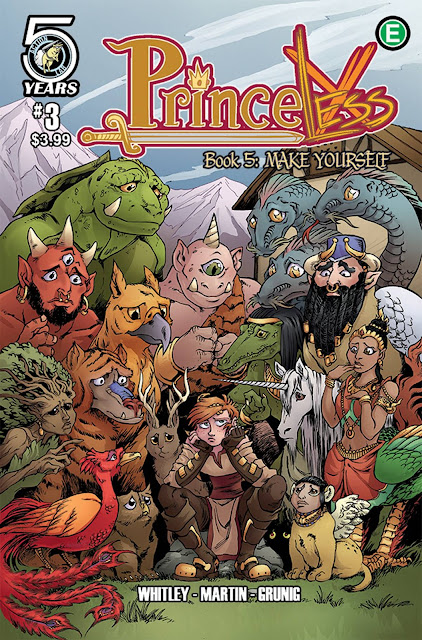 (W) Jeremy Whitley (A/CA) Emily Martin, Brett Grunig
Adrienne is off to save her sisters with a new dwarven companion in tow.  Meanwhile, Bedelia and Sparky have embarked on a very personal quest of their own, to reconnect with a past that both of them have long left behind.  And on the other end of the kingdom, Devin and his new party try to track down the notorious Black Knight and find out what happened to the Queen. 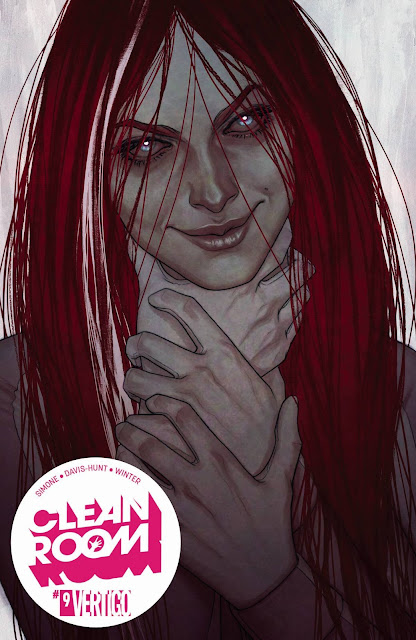 (W) Gail Simone (A) Jon Davis-Hunt (CA) Jenny Frison
Enigmatic exorcist Astrid Mueller and her arch-rival Chloe Pierce get locked in the Clean Room as the Windy City meets a blood-starved army of Blue Utopians. But is being stuck in a hermetically sealed chamber far below the Chicago streets with someone who knows your darkest, damaged desires any safer than a city on fire? 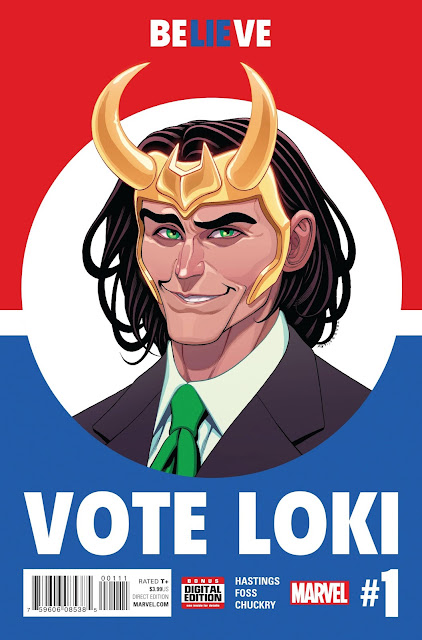 (W) Christopher Hastings (A) Langdon Foss (CA) Tradd Moore
Loki is many things -- god, trickster, brother, liar, son, villain, even hero. Now he wants to add one more thing to the list: President of the United States. That's right, the God of Lies has set his sights on becoming the ruler of the free world, but is this just another scheme? One thing's for certain -- with Loki's winning smile and silver tongue on the campaign trail, this election just got a lot more interesting...
Rated T+ 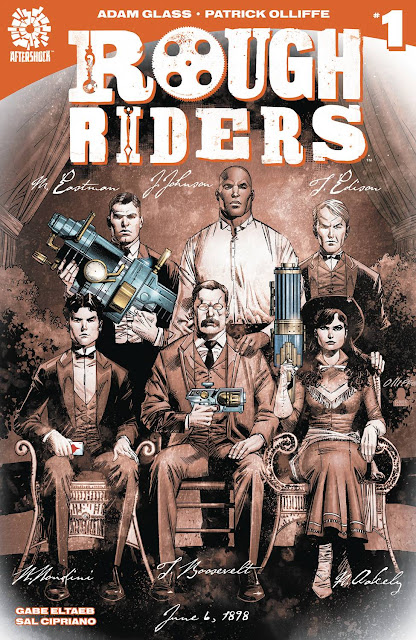 (W) Adam Glass (A/CA) Pat Oliffe
From Aftershock Comics. Led by a young Theodore Roosevelt, a motley crew of soon-to-be American legends must work together to solve a mystery that threatens all of existence. Harry Houdini - street magician and master of misdirection. Annie Oakley - a washed-up entertainer, eager for a chance to prove herself in a real war. Jack Johnson - an undefeated brawler and the son of ex-slaves, determined to get his shot at the heavyweight championship ... When a terrifying alien technology destroys the U.S.S. Maine, these unlikely allies set sail for bloody Cuba, into the heart of a brewing conflict, to wage a shadow war against the greatest threat mankind has ever known. Before they were famous, they were ... Rough Riders. Scheduled to ship 06/08/16. (3289)