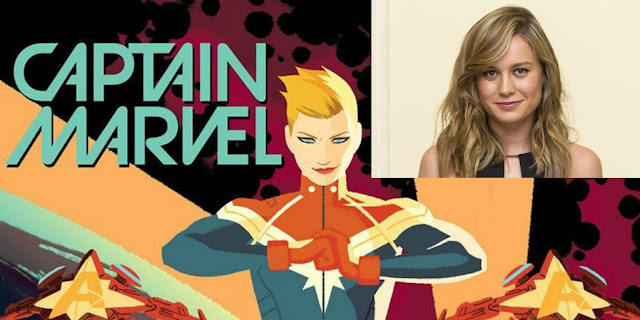 Marvel Studio's first and only planned movie with a female lead, Captain Marvel, has their hearts set on Oscar-winner Brie Larson.

Variety is reporting that Larson "is in early talks to play Captain Marvel, one of Marvel’s most popular female superheroes, in an upcoming standalone film. It’s unknown where negotiations stand, but sources have told Variety that Larson is their first choice, and that she’s leaning toward playing the part."

No director has been hired yet but there's been plenty of rumors surrounding talented female directors like Emily Carmichael, Niki Caro (Whale Rider) and Jennifer Kent (The Babadook). The script is being penned by Meg LeFauve (Inside Out) and Nicole Perlman (Guardians of the Galaxy) about air force pilot Carol Danvers whose DNA is blended with an alien giving her super powers and becomes Captain Marvel.

Larson's star has been steadily rising over the last few years culminating in an Academy Award for Best Actress for her role in 2015's 'Room.' She's already been in a comic book adaptation too. In 2010 she played Envy Adams in Edgar Wright's Scott Pilgrim vs. the World. Whether she signs on for 'Marvel' or not she'll continue to be in high demand as she's completed Ben Wheatley’s 'Free Fire,' is currently filming 'The Glass Castle,' and will be appearing in the potential blockbuster 'Kong: Skull Island.'

If there's one thing that might irk some fans is the fact that Danvers is usually depicted as a seasoned pilot whose seen some stuff and tends to be aged in her 30's. The 26-year old Larson has the unquestionable acting chops but is she too young for the role? It probably won't matter in the long run as getting an actress of her caliber overrules everything else.

Captain Marvel is scheduled for release on July 6, 2018.