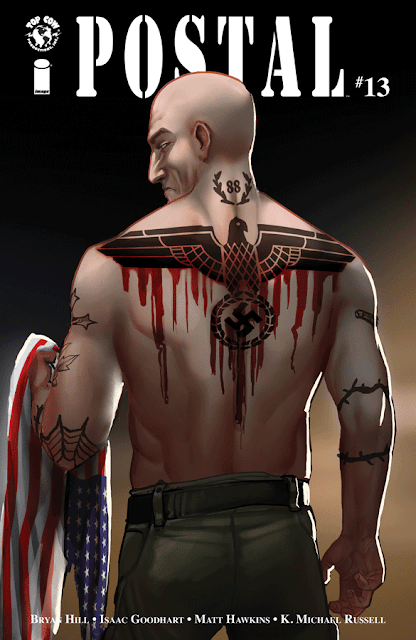 'Postal' seems to excel when it ventures away from its regular cast and brings one of Eden's mysterious residents to the forefront. After a break, Bryan Hill and Isaac Goodhart welcome K. Michael Russell as the new colorist. A new arc puts the spotlight on an unlikely protagonist in one of the series most tautly action-packed issues.

Living on the outskirts of Eden in a dusty trailer, Rowan lives wracked with guilt for his crimes. He came to town way back in issue one and hopes to redeem himself. A former neo-nazi with impeccable penmanship (shout-out to Troy Peteri for the lettering) becomes a target when his past begins to catch up to him.

Hill has created a character that you'll hate and sympathize with. It's a delicate balance considering what he's done in his life but the reason he reformed his ways should pierce your soul. Mayor Shiffron takes on a surprisingly motherly approach in helping Rowan. It's as much about keeping a lid on a potentially explosive situation as it is helping a citizen who's kept to himself and followed the rules.

Goodhart does some of his best work here which seems redundant. He keeps finding ways to surpass previous issues and has again here. Besides clean lines and detailed backgrounds, the dynamic layouts give different perspectives in a scene, generate motion in others, and just seems to hum at the perfect pace. Russell seamlessly enters the series with his own color palette that equals the wonderful work done previously by Betsy Gonia. The colors are sometimes brighter than we're used to, a flashback scene filtered in distinctive hues and a flawless splash page.

'Postal' is back with a vengeance with an explosive new arc. Hill brings a reenergized new narrative after a short hiatus. It's a complicated tale without a traditional hero at its center in the midst of a simmering war. This is the issue you'll tell your friends about.