Mockumentary Now: Thor was Chillin' Down Under During 'Captain America: Civil War' 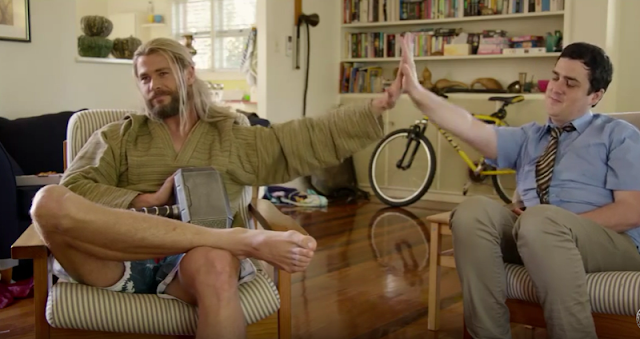 Lucky attendees of this year's Comic-Con in San Diego got to see what Thor was up to while his Avenger buddies were fighting one another in Captain America: Civil War.? Thor: Ragnarok director Taika Waititi presented the mockumentary he directed during the Marvel Studios panel in July that explains the God of Thunder's whereabouts during the kerfluffle and which team he would've chosen.


Similar in tone to his vampire parody, What We Do in the Shadows, Waititi puts Thor (Australia-native Chris Hemsworth) in a funny situation, relaxing in Australia, moving in with
roommate Darryl, and trying to correspond with Tony Stark via "electronic mail." Meanwhile, Bruce Banner (Mark Ruffalo) wonders why he wakes up in cut-offs and Thor can't understand why the 'big purple guy' doesn't like standing up.

It's a hilarious parody that would actually make a decent sit-com. Hemsworth's comedic chops are the real deal. Check out the video and see for yourself before it comes out as part of the extras on the Captain America: Civil War Digital HD release September 2 and on Blu-ray September 13.