REVIEW: 'Kill or Be Killed' #1 by Ed Brubaker, Sean Phillips, and Elizabeth Breitweiser 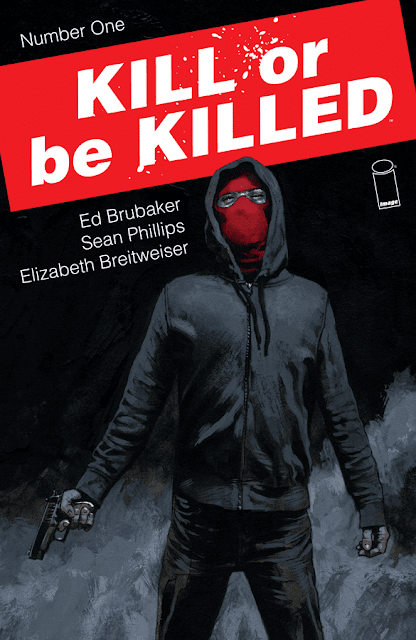 There is a short list of comic book creators whose books I'll buy sight-unseen. Ed Brubaker and Sean Phillips are among those names. So, not knowing a thing about their latest collaboration (with Elizabeth Breitweiser on colors) from Image Comics, Kill or Be Killed, I knew with a title like that I had to check it out.

The acclaimed duo has another powerfully dark tale that veers from their usual period pulp stories like the brilliant "Fade Out" and superb 'Fatale,' Kill or Be Killed examines the rise of an unlikely vigilante. Sure, violent vigilante comics are quite common but Brubaker takes an interesting angle with the young Dylan.

The story opens in the present with an already fully-formed killing machine in the hoodie-clad Dylan mowing down "people who deserve it." And as we've before in comics, the narrative shifts in reverse to see how we came to this point of ultra-violent retribution. What makes this approach work is Brubaker's narration through Dylan. He creates a complex young man full of insecurities and fears that makes him the least likely candidate to become this cold-blooded killer. In those first pages, he's far more enlightened to the plight of society, giving a laundry list of injustices taking place right now. It's timely and sobering but Dylan didn't start that way.

Instead, Dylan reminds me of a more sophisticated version of Dave Lizewski from Mark Millar's Kick-Ass. He's not a teenager but an older grad student who's in love with his roommate but she has a boyfriend. Feeling unfulfilled, lonely, and depressed he sets out to end his life. That's where things are set in motion in ways I'm not entirely sure work just yet but I'll be damned if Brubaker doesn't keep you invested nonetheless. You can't help but empathize with the underdog Dylan who seems like a normal thoughtful guy. It'll be hard to imagine him as the gun-toting killer we meet in the beginning.

In typical Brubaker fashion, this is surely the first act of a much longer game that will take some unexpected twists along the way. The first twist will have you second-guessing what you're seeing.

Phillips once again provides outstanding art with a great amount of detail and style. The story remains fluid and dramatic with deliberate pacing and varied panel sizes. It's gritty realism with some magical touches like illustrating snowfall that works perfectly. It's all brought to life with Breitweiser's colors that at times add warmth, create terror or help a panel pop. It's all a synergistic display of art professionals at their best.

There's more to 'Kill or Be Killed' that the title represents. Brubaker and Phillips have somehow created what should be a standard vigilante story into a character-driven drama that is as compelling as their past work. You'll be hooked after the first issue if only to find out what's next and how Brubaker pulls off this ambitious and unexpected story.