GHOST RIDER: Gabriel Luna in Costume, Found Footage Video, and the Diversity of 'Agents of SHIELD' 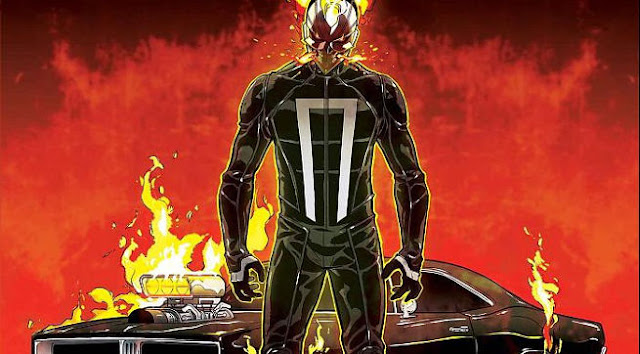 Marvel’s Agents of S.H.I.E.L.D. is adding the Robbie Reyes version of Ghost Rider in season four and now comes the first image of Gabriel Luna as the Spirit of Vengeance.

“As always, we are going to put our own spin on the character,” executive producer Jed Whedon tells EW. “We are staying true to the comics in the places where we feel like it’s really important — we love the character’s family dynamic and the East L.A. kid in him.”

Producers have pointed to the character's short history as an attractive alternative to the longer canon of Jonny Blaze's Ghost Rider. They can mold and shape Reyes as they wish without contradicting decades of comic book history.

All-New Ghost Rider by Felipe Smith and Tradd Moore introduced Reyes in 2014 as a young East L.A. street racer who takes care of his younger brother and through an accident is possessed by the spirit of vengeance. It was canceled after only twelve issues. Agents already altered Reyes by making him older than in the comics. "Because there is so little material on him right now, a lot of the show is going to be expanding the Ghost Rider canon," Luna said. "That’s really cool. It’s all me. It’s all on me."

Luna's arrival as Reyes comes at a time when viewership demos coincide with the population growth of American Latinos in the U.S. The increase of Latinos in the U.S. has resulted in them consuming more media, having more buying power, but having less representation in the medium they consume the most - television. The tide seems to be changing, in small steps, with the success of CW's 'Jane the Virgin,' USA Network's 'Queen of the South,' and Netflix's 'The Get Down,' and 'Narcos.' Agents has taken a more inclusive approach of adding more Asians, African-Americans, and Latinos than most primetime shows.

Luna is the latest example but playing a surprising character like Ghost Rider in an ensemble team dynamic could prove to be challenging. Will he get enough screen time? Could it lead to a spin-off series of his own? When and how many episodes will include Reyes?  Although the first episode is entitled "The Ghost" might be a good indication we'll meet him sooner than later.

Read the synopsis for this coming season:

Marvel’s Agents of S.H.I.E.L.D. returns with a vengeance for the fourth exciting season in an all new time period, Tuesday at 10:00 p.m. ET. In the aftermath of their journey to another planet, Director Phil Coulson (Clark Gregg) and the rest of the team were driven more than ever to put an end to the Hydra organization. Little did they know that they were up against the deadliest threat they’ve ever faced – an extremely powerful Inhuman, Hive, who was transported back from Maveth in the body of their worst enemy, Grant Ward. The team was able to thwart and kill Hive and take down Hydra, but they are all still mourning the death of fellow agent and Inhuman, Lincoln Campbell.

In light of the Sokovia Accords, and with Hydra obliterated, S.H.I.E.L.D. has been legitimatized again and no longer needs to operate in the shadows. Since the world presumes that Coulson is dead, the organization needed a new Director (Jason O’Mara) to be the face of the organization. Coulson finds himself back in the role as an agent and teamed with Mack (Henry Simmons), and together they are tasked with tracking down and confirming the presence of Enhanced people, aka Inhumans. They have been trying to track down and capture Daisy (Chloe Bennet), aka Quake, who has gone rogue in an attempt to atone for sins from the past. But with the world believing that Daisy is a dangerous outlaw who has taken down banks and bridges, the new Director has no qualms about taking her down for good. Agent May (Ming-Na Wen) is tasked with training specialist strike teams, and Fitz (Iain De Caestecker) and Simmons (Elizabeth Henstridge) have taken a big step forward in their relationship. But with Simmons’ new promotion as Special Advisor to the Director in Science and Technology, Fitz, as well as her former team members, finds it hard to confide in or trust her since she’s now the Director’s confidant.

Robbie Reyes (Gabriel Luna) will roar into the lives of Agent Coulson and the team as a junkyard mechanic who can turn on a dime into the terrifying Ghost Rider. Will Robbie be a friend or foe to S.H.I.E.L.D. – as well as the world, itself? Meanwhile, Fitz discovers that socially awkward genius and friend Dr. Radcliffe (John Hannah) has started putting the finishing touches on a new, secret invention.