This week in new comic book releases might be too much to cover in one post. You could literally just pick up DC Comics titles, for example, and it could be enough to hold you over until next week. Same with Marvel or Image, publishers are pumping out more and more great books. Indies especially, like Image, has some exciting stories. Descender, The Hunt, Postal, Eden's Fall, and more are the reason Image is the third biggest comic publisher. Other indies include the brilliant Tomboy, the fun and exciting Doorman, Sonic Universe, The Hillbilly, Josie and the Pussycats, Generation Zero, and so much more. Check out this week's recommendations. Happy reading!

Also, in anticipation of Marvel's Luke Cage Netflix series beginning this Friday, we've created this week's slideshow with music from Ol' Dirty Bastard. Shimmy Shimmy Ya was featured in promos for the show. Enjoy! 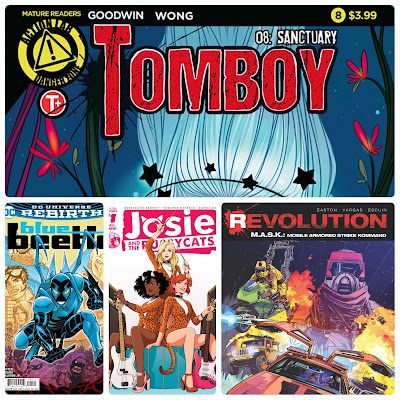 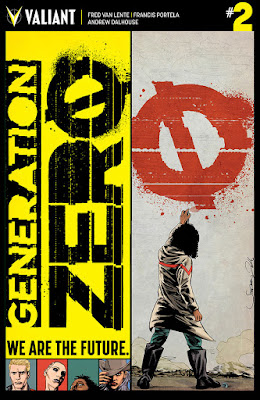 (W) Fred Van Lente (A) Francis Portela (CA) Stephen Mooney
They've infiltrated, assassinated, and overthrown... Now this reformed covert strike team of teenage walking warheads have set their sights on a dangerous new mission: high school! In the secretive tech oasis of Rook, Michigan, who can a teenager trust? Not the police... Not the teachers... And definitely not the parents. So when high schooler Keisha Sherman's boyfriend turns up dead in an accident gone awry, she makes a desperate plea...and Generation Zero have heeded her call! But, with precision-honed military training and a taste for subverting authority, can this squad of high-powered, teenage superhumans infiltrate Rook undetected? Or is their very presence about to draw another of the town's billion-dollar secrets into the light of day? THE FUTURE OF VALIANT continues as New York Times best-selling writer Fred Van Lente (4001 A.D.: WAR MOTHER) and acclaimed artist Francis Portela (FAITH) launch the most volatile superteam in comics into their first, mind-blowing monthly series! 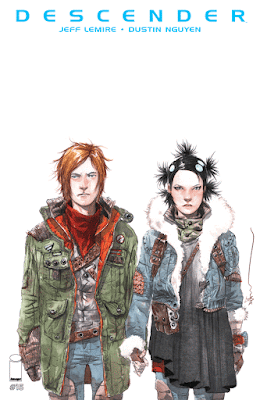 (W) Jeff Lemire (A/CA) Dustin Nguyen
"SINGULARITIES," Part Four
At long last the story of the mysterious QUEEN BETWEEN is revealed and her connection to Andy and Tim-21 will rock the galaxy. 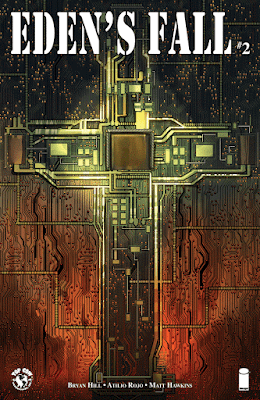 (W) Matt Hawkins, Bryan Hill (A) Antonio Rojo (CA) Rahsan Ekedal
FBI Agent James Miller has found his way into Eden, and now he's tracking the serpent himself. While his friends on the outside try to find a way to protect him, Miller targets the criminal hiding out in a town full of them, but the man he seeks may be more than he bargained for... and the price of revenge will change FBI Agent James Miller forever. 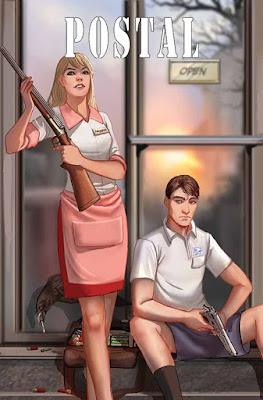 (W) Bryan Edward Hill (A) Isaac Goodhart (CA) Linda Sejic
Eden strikes back at the Aryan brotherhood, and the Aryan brotherhood responds with a psychopath hungry for retribution. The battlefield is set and both sides march towards their final confrontation. What happens when violent supremacy meets righteous violence? War. 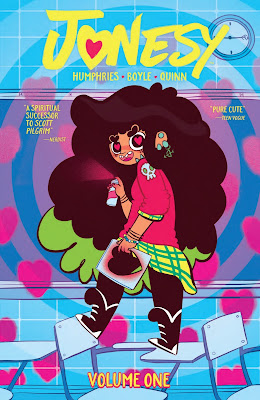 (W) Sam Humphries (A/CA) Caitlin Rose Boyle
What's to Love: Jonesy is a comic about love that makes us swoon! Sam Humphries (Legendary Star Lord, Citizen Jack) and fresh talent Caitlin Rose Boyle (Buck n' Lou & the Night Crew) bring something special to BOOM! Box with this series about mad-cap shenanigans, friendship, pals, being a teenager, and figuring out who you are...with a teen cupid twist! If you like Giant Days, dig adorkable romance stories, or just want to smile from ear to ear after reading a comic, you'll fall in love with Jonesy!
What It Is: Jonesy is a self-described "cool dork" who spends her time making zines nobody reads, watching anime, and listening to riot grrrl bands and 1D simultaneously. But she has a secret nobody knows. She has the power to make people fall in love! Anyone. With anything. There's only one catch-it doesn't work on herself. She's gonna have to find love the old-fashioned way, and in the meantime, figure out how to distract herself from the real emotions she inevitably has to face when her powers go wrong. Collects the complete limited series. 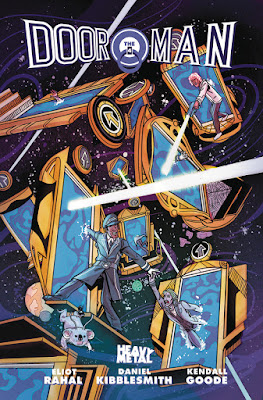 (W) Eliot Rahal, Daniel Kibblesmith (A/CA) Kendall Goode
Our first series ends with a big bang! The Publicist is out for blood, and the heroes must scramble to save the day. Armed with the Koalmanac and a guileless clone of Carlisle Moongale, Flower and Henry storm Carlisle's corporate castle to thwart his evil plan. The problem? It's too late. 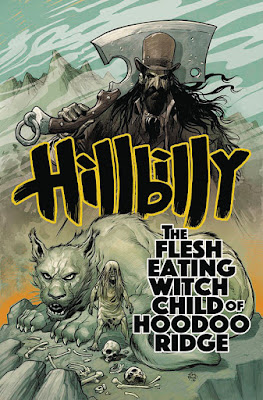 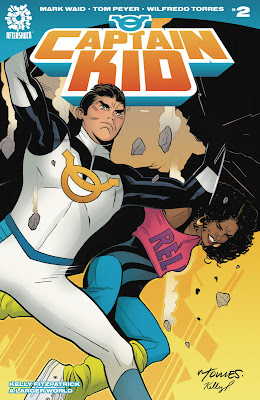 (W) Mark Waid, Tom Peyer (A/CA) Wilfredo Torres
While local government, business and media conspire to destroy the city with weather machines, a hero from the future gives Captain Kid a clue to his origin. 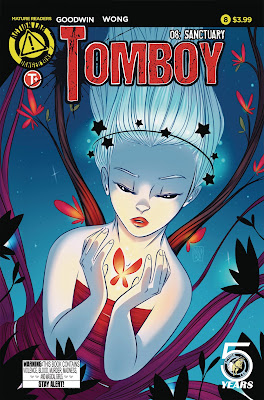 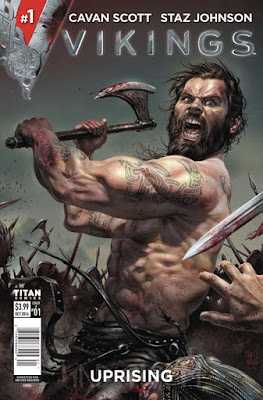 (W) Cavan Scott (A) Daniel Indro (CA) Chris Wahl
Lagertha faces a shock when she returns to the holy place of Uppsala to seek advice from the gods following Paris, only to find carnage and slaughter. And it seems that escaped slaves are responsible. Lagertha and her shield maidens must take up arms to stop this uprising. Ragnar, meanwhile, is a broken man. But an attempt on his life forces him to take drastic measures... 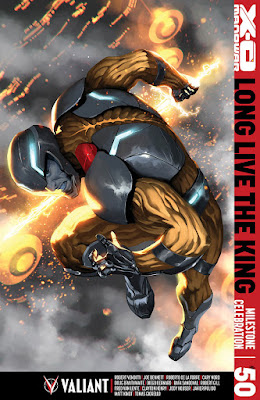 They are The Torment - and their name means death. Thought to be a legend by the extraterrestrial empire called the Vine, they have now become Earth's violent reality. They have traveled for eons to reach us...in search of Aric of Dacia, the unstoppable X-O Manowar. How can Aric of Dacia defeat an omnipotent threat nearly as old as the universe itself? Will the X-O Manowar armor truly be our world's salvation, just as the Vine's myths foretold? Is this the beginning of the end for X-O Manowar...or the beginning of something bigger?

Plus: The X-O MANOWAR #50 COUNTDOWN GIVEAWAY begins here! Each issue of "LONG LIVE THE KING" comes bagged with one of 50 exclusive micro-prints from comics' leading talents...or full-blown ORIGINAL ARTWORK! 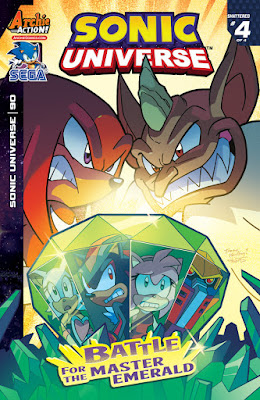 (W) Ian Flynn (A) Jim Amash, Adam Bryce Thomas (CA) Tracy Yardley
"Shattered," Part 4. Time is running out for Knuckles and Amy! The vile wizard Walter Naugus has made his big move, which means certain doom for our heroes! And as the Shattered World Crisis comes to an end, Angel Island begins to fall! Can Red and Rose snatch victory at the last second? Featuring cover artwork by the legendary Tracy Yardley and an "and Knuckles" variant by the exceptional Evan Stanley! 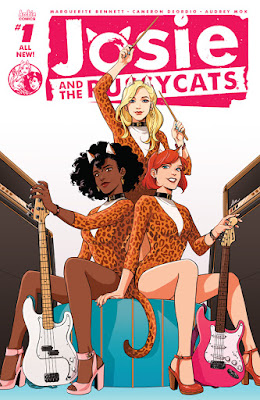 (W) Marguerite Bennett, Cameron Deordio (A/CA) Audrey Mok
Grab the latest, surefire, top-of-the-charts new Riverdale series! Friends, countrymen, lend me your long tails and ears for hats - the Pussycats are back! In this series kick-off, Josie's getting the band together to help achieve her dreams of musical stardom. But for the group to last, it needs a strong foundation of friendship and trust. Can the girls get going, or will Alexandra's plotting put a stop to the whole thing?  Don't miss comics' supreme songstresses' return to the limelight in this exciting first issue! 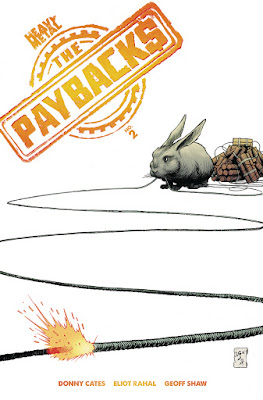 (W) Donny Cates, Eliot Rahal (A/CA) Geoff Shaw
Betrayal! Revenge! War! And a journey to the center of an endless labyrinth filled with crazy (k)nightmare stuff inside an infinite mansion inside a super cool guy van! Order this book or the bunny gets it! #thanks 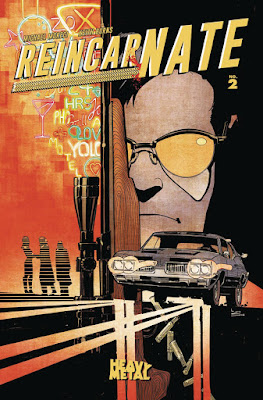 (W) Michael Moreci (A/CA) Keith Burns
The self-published cult favorite from Michael Moreci (Roche Limit, Hoax Hunters) and Keith Burns (The Boys, Ex-Con) continues to Heavy Metal! After a confrontation with El Panda, Nate discovers things may not be as they seem. And if things weren't bad enough for Nate, the mysterious assassin makes an attempt to finish what he started.. ReincarNATE is currently in development as a TV show! 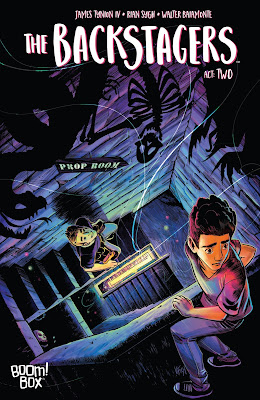 (W) James TynionIV (A) Rian Sygh (CA) Veronica Fish
The rest of the stage crew kids might be used to all the magical weirdness that goes on, but Jory is thrilled to discover more about the worlds backstage. 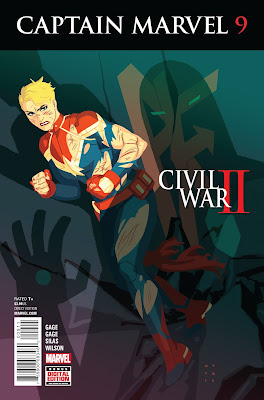 (W) Ruth Gage, Christos Gage (A/CA) Kris Anka
CIVIL WAR II TIE-IN!
•  Captain Marvel thought she had it figured out-change the future and save lives. But as friendships turn cold, she has to decide how far she's willing to go...
Rated T+ 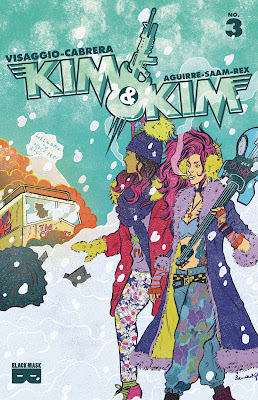 (W) Magdalene Visaggio (A) Eva Cabrera (CA) Devaki Neogi
Interstellar-cowboy life just keeps getting worse for our badass besties. On the hunt for Lady Babylon, Kim & Kim get shot out the sky by an unknown enemy and end up stranded on the frozen world of Never-Look-Back. But what they find there might be the breakthrough they've been looking for. 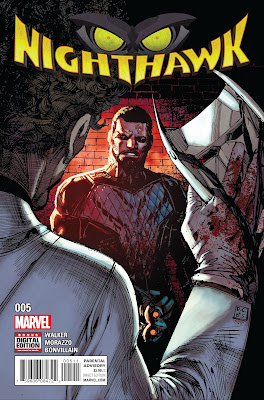 (W) David Walker (A) Martin Morazzo (CA) Bill Sienkiewicz, Denys Cowan
NIGHTHAWK vs THE REVELATOR!
•  While riots and racial unrest ravage the city of Chicago, NIGHTHAWK squares off against the serial killer known as THE REVELATOR.
•  Can Nighthawk stop the killer from fanning the flames that engulf the city, or is it already too late?
Parental Advisory 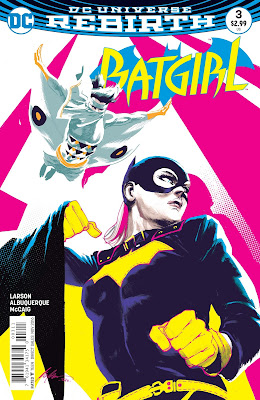 (W) Hope Larson (A/CA) Rafael Albuquerque
"Beyond Burnside" part 3! After Batgirl faces off against a second villain with the mark of "The Student," she must set off to Korea to get to the bottom of the mysterious attacks before someone close to her gets caught in the crossfire! 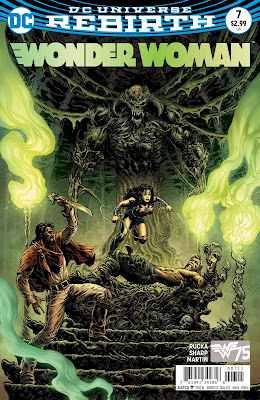 (W) Greg Rucka (A/CA) Liam Sharp
"THE LIES" part 4! One god down-how many more to go? Diana takes another step closer to the truth, and Steve Trevor confronts his past! 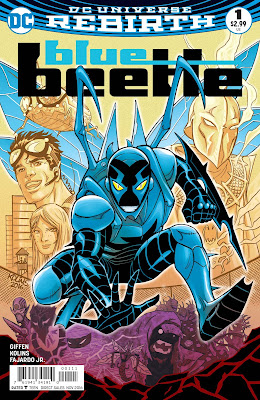 (W) Keith Giffen (A/CA) Scott Kolins
Jaime Reyes is back home, but just when he thought he had a grasp on this alter-ego, the Blue Beetle, he discovers everything he believed about his scarab is a lie according to the mysterious Doctor Fate. With dire warnings about the symbiote that is fused to Reyes' spine, Kent Nelson, the original wielder of Doctor Fate's power, seemingly on verge of insanity, has he come to save Jaime as he claims...or will he try to eliminate the Blue Beetle, no matter the cost? 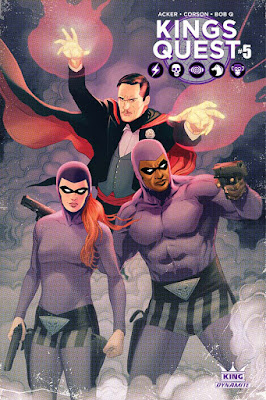 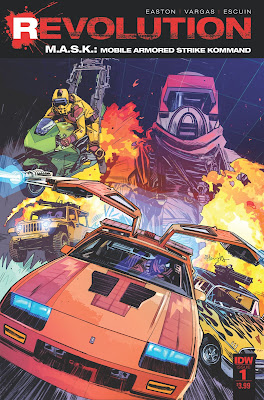 (W) Brandon Easton (A) Tony Vargas (CA) Tommy Lee Edwards
The origin of M.A.S.K.! Miles Mayhem's decades long plans are finally coming to fruition, but will the revealed secrets he has hidden from Matt Trakker create a new enemy bent on Mayhem's undoing? A special story tying directly into REVOLUTION! 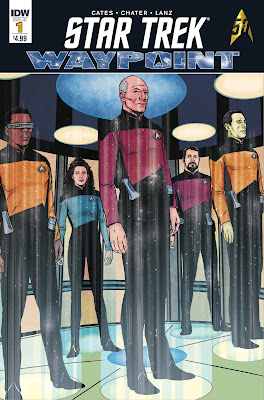 (W) Donny Cates, Sandra Lanz (A) Mack Chater, Sandra Lanz (CA) Marc Laming
A blockbuster bi-monthly anthology to celebrate 50 years of STAR TREK, featuring short stories across all Treks, by the top talent of today and yesterday!
First, a NEXT GENERATION story by Donny Cates and Mack Chater. Unable to decipher a mysterious ship's coded messages, Starfleet has enlisted its two greatest scientific minds, Captain Geordi La Forge and his best friend Data, to investigate. What they discover will alter the course of scientific human history as we know it!
Then, an ORIGINAL SERIES story by Sandra Lanz, where a crewmember, stranded on a strange planet, encounters a bizarre alien creature. They must learn how to interact, but how? 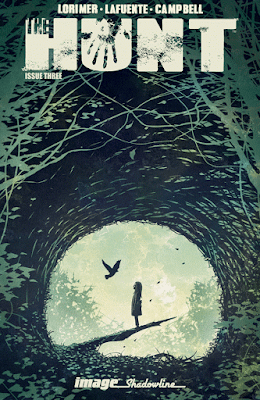 (W) Colin Lorimer (A/CA) Colin Lorimer
With a slew of murders, sightings of giant winged creatures, and a creeping madness taking over the populace of Ireland, a young girl's tales of soul-stealing monsters may have more relevance than anyone could have ever imagined.