First and foremost, we have to address the new series from Dynamite with KISS #1 by Amy Chu and Kewber Baal. The legendary rock group is no stranger to putting their names on things and this latest venture is an accessible adventure whether you're a long-time fan or not. Love and Rockets is back as an all-new, ongoing comic book series from Jaime and Gilbert Hernandez! Get the acclaimed series from IDW Wynonna Earp in a trade paperback. Dark Knight III The Master Race introduces a new Batgirl and check out the "new" Marvel NOW issues and so much more. Happy Reading!

Oh, and don't forget to check out this week's slideshow featuring music from who else? KISS! 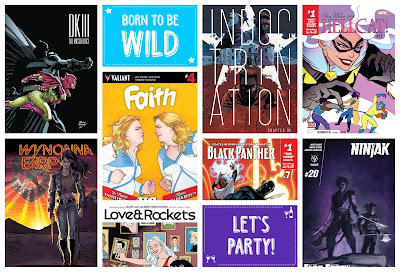 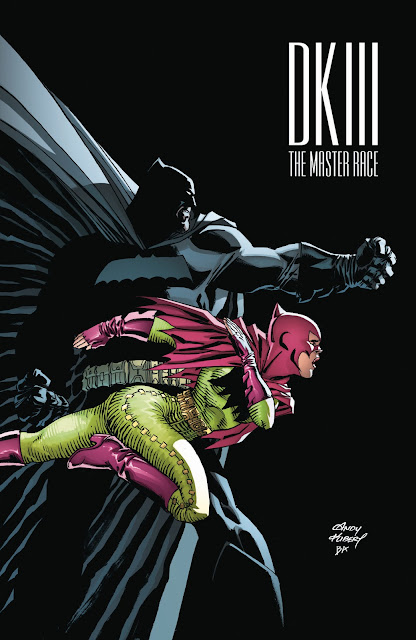 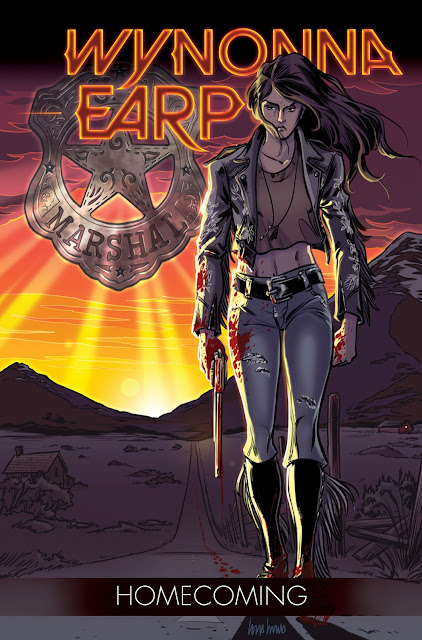 (W) Beau Smith (A) Chris Evenhuis (A/CA) Lora Innes
The US Marshals Black Badge division has been fighting back against supernatural threats for decades. But even the toughest werewolf, most bloodthirsty vampire, or grisliest zombie knows there's one agent to avoid at all cost: Wynonna Earp. Descended from the legendary Wyatt Earp, Wynonna is dead set on bringing the unnatural to justice! Collects issues #1-6. 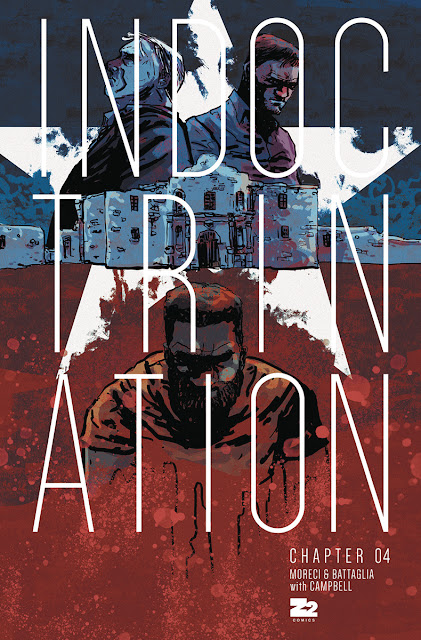 (W) Michael Moreci (A/CA) Matt Battaglia
With Georgia's life hanging in the balance, Trent is confronted by Huxum who offers his help in finding the bomber. Huxum's offer isn't what it seems, as Trent quickly learns he has a dangerous ulterior motive in mind. As this is happening, the serpent cult draws closer to the executing its plans, leading to the shocking finale of the first arc in issue #5! 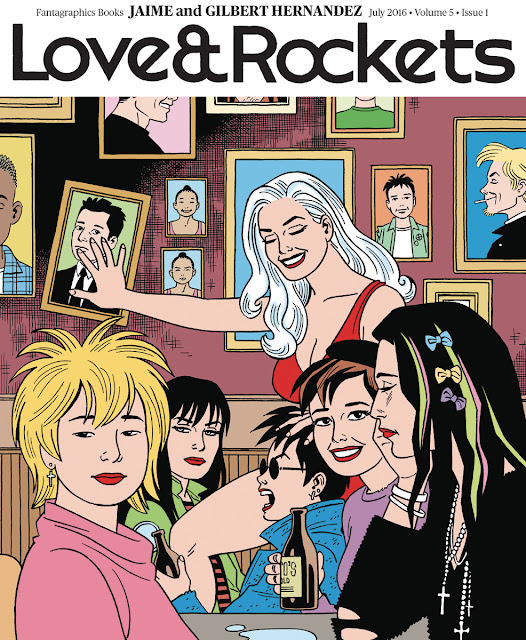 The comic book event of 2016! Love and Rockets is back as an all-new, ongoing comic book series (Vol. IV for those keeping track at home)! On Jaime's side: What do you do when none of your old punk friends want to be punk any more? And just who does the evil Princess Animus think she is? (Hint: She doesn't know, she has amnesia.) On Gilbert's side: Family drama takes center stage when a Fritz discovers a grandchild she didn't know existed! Old fans and new fans are sure to enjoy the most diverse cast of characters in comics, including Maggie, Hopey, Pipo, Fritz, Tonta, Baby, and many more! Plus other surprises! Grrrowl! 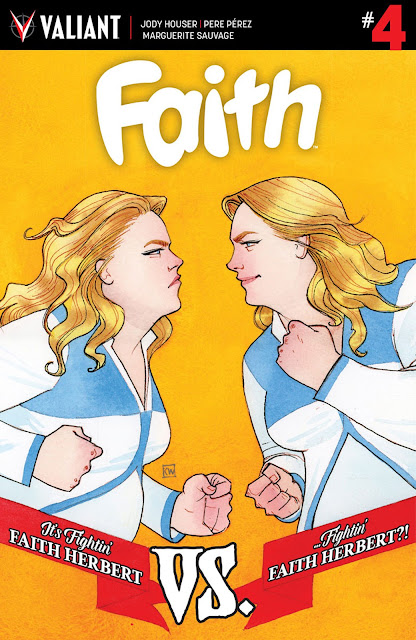 From all across the world, fans have flocked to California's biggest comics convention...but they never expected to see real-life superheroes duking it out! When fandom's most important event becomes an all-out super-powered melee, can Faith "Zephyr" Herbert and her crossbow-wielding boyfriend, Obadiah Archer, prevent a gang of diabolical con-crashers from turning thousands of spectators into victims of the most brazen caper in comic book history?

If Faith has her way, these back-issue bandits will be going behind bars when breakout writer Jody Houser (Mother Panic) and acclaimed artists Pere Perez (ARCHER & ARMSTRONG) and Marguerite Sauvage (DC Comics Bombshells) deliver an all-access pass to the high-stakes super-showdown of the fall! 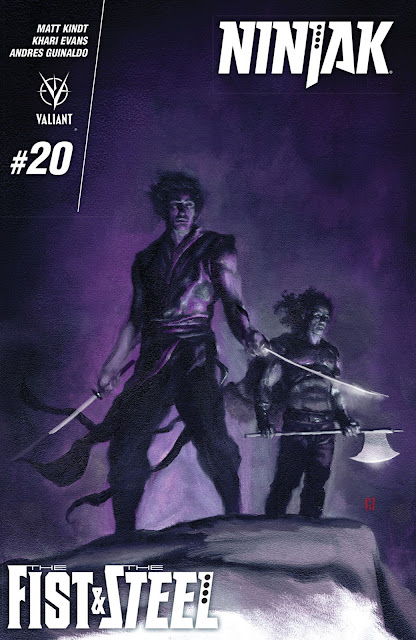 His body consumed by a preternatural cancer in the present, Colin King's mind has grasped a prophetic vision of the future - one that just might hold the key to a cure! But years from today, that quest will bring him face-to-face yet again with one of the world's most perverse criminal and scientific minds: the devious Dr. Silk! Hoping to exploit the mysteries of the Deadside in his quest for immortal life, Silk has left rot and ruin in his polluted wake - until the newly allied team of Ninjak and the Eternal Warrior come crashing down on his plot to conquer not just the future...but all of eternity itself! 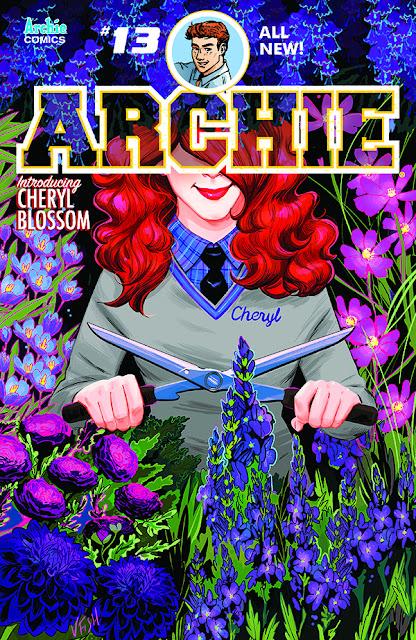 (W) Mark Waid (A/CA) Veronica Fish
Veronica's out... and Cheryl Blossom is in! Veronica has to adjust to her new settings at Pembrooke Academy, a private school. That shouldn't be a problem for the rich, affable teen, except for one thing: Pembrooke's reigning queen, Cheryl, isn't looking to make any friends. Can Veronica establish her place at the haughty high school? And just how is Archie going to adjust back home in Riverdale? Find out in this can't-miss issue! 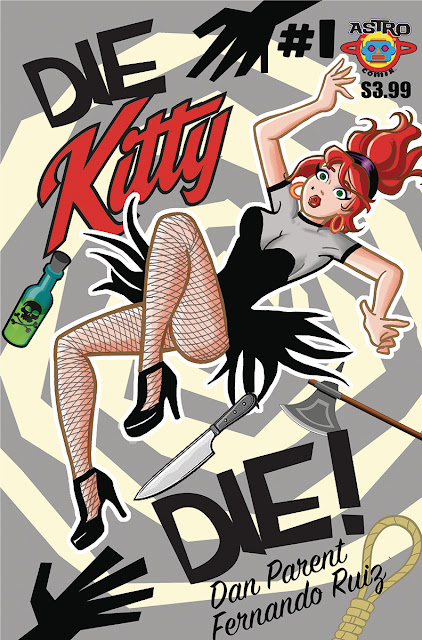 (W) Fernando Ruiz, Dan Parent (A) Fernando Ruiz (A/CA) Dan Parent
Kitty Ravencraft, a beautiful and magical young witch, is the star of her own popular comic book. When her greedy, publicity-starved publisher wants to increase interest in her comic book, he does what many comic book publishers do nowadays - he sets out to kill his main character, Kitty! Even worse, he decides to really spike sales by killing the real Kitty in real life! The question is though, how do you kill a witch? Chapterhouse Comics and worldwide fan favorites, Dan Parent & Fernando Ruiz present Die, Kitty! Die!, a funny, exciting, and often sexy story about a girl caught in both the supernatural world of witches, and the super-crazy world of comics! 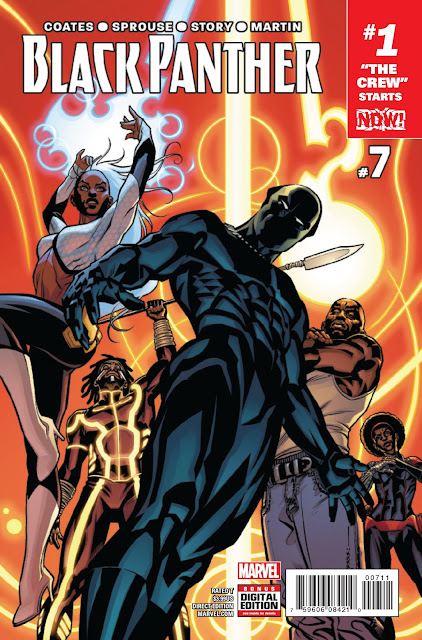 (W) Ta-Nehisi Coates (A) Chris Sprouse (CA) Brian Stelfreeze
"THE CREW" STARTS NOW!
With no one left to trust, T'Challa leans on his day ones: Luke Cage. Misty Knight. Storm. But Wakanda may be too far gone for this all-new, all different CREW...
Rated T 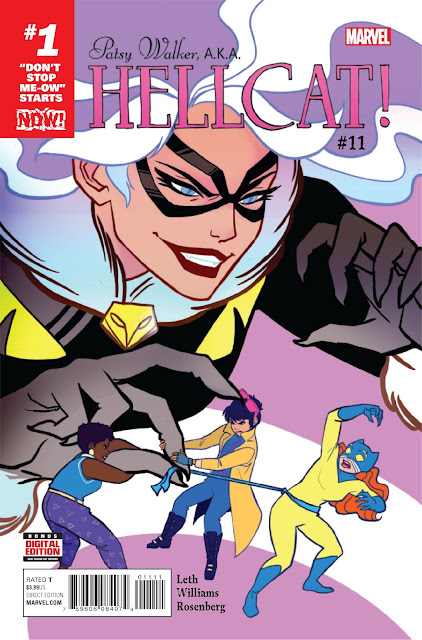 (W) Kate Leth (A/CA) Brittney Williams
"DON'T STOP ME-OW" STARTS NOW!
Who's ready for a knock-down, drag-out, no-holds-barred CAT-FIGHT? Literally! Okay, it's kind of figurative because they're not *actually* cats, but it's pretty close. Felicia Hardy is on a collision course with Patsy Walker. You know what that means? It's Hellcat vs. Black Cat y'all! Featuring everyone's favorite teenage vampire Jubilee! But who's side is she on? Sharpen your claws because it's going to be a feline fiasco for the ages!
Rated T 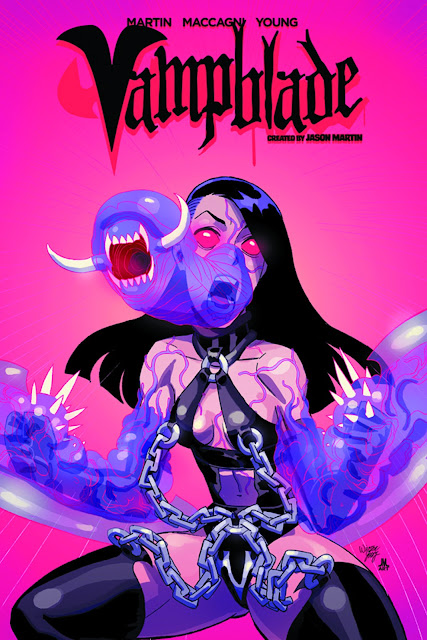 (W) Jason Martin (A) Marco Maccagni (A/CA) Winston Young
Vampblade picks up right where she left off, embracing her new lifestyle of comic store owner by day and other-dimensional vampire slayer by night. But when you transform into a scantily clad 90s bad girl with giant blades and chains, keeping your anonymity is a challenge. Consequently, so is surviving the escalating arms race with hidden alien invaders!! 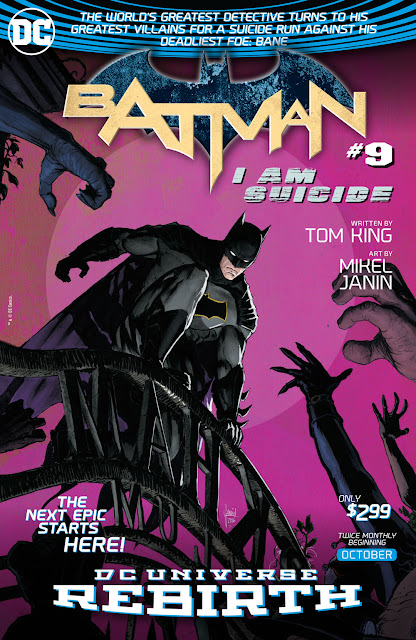 (W) Tom King (A/CA) Mikel Janin
"I Am Suicide" part one! Batman has always been crazy...but this? This is suicide! In order to retrieve Psycho-Pirate and save Gotham Girl, Batman must recruit a team from Amanda Waller to break into the most impenetrable prison in the world and steal from one of the Dark Knight's greatest foes...Bane. The next great Batman story begins here! 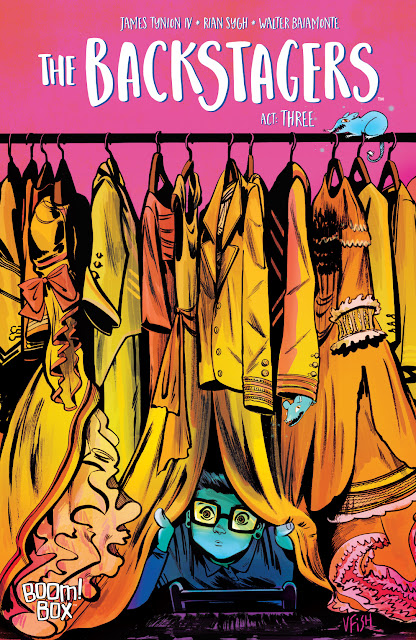 (W) James TynionIV (A) Rian Sygh (CA) Veronica Fish
It's Tech Rehearsal for Les Terribles and Beckett is determined to nail every cue, but Sasha's mistake brings new drama to the stage! 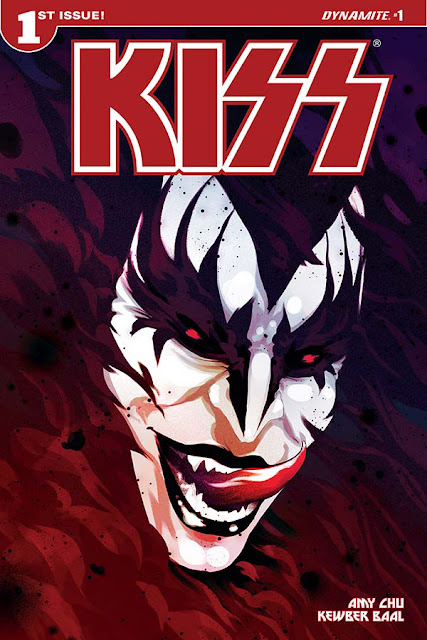 (W) Amy Chu (A) Kewber Baal (CA) Goni Montes
KISS is back! Back to the FUTURE in this dark sci-fi adventure. In a world without sun and a world without heroes, four young friends embark on a dangerous mission - to uncover the truth about the mysterious Council of Elders and their underground home, the city of Blackwell. But first they need some help from the past...
"What is the power of KISS? I was having breakfast recently with the fabulous writer Kelly Sue DeConnick. When she found out I was writing this series, it was like firecrackers had been set off in the restaurant, she was so excited. So I'm doing this not just for the hardcore fans (like Kelly Sue) but also the new ones, like her children. It's a huge challenge for me. KISS is iconic. Legendary. It's global and cross-generational. So much has been done before with KISS in comics, a LOT of fun and crazy stuff. So for this series, I thought, why not go more serious? For research, I hunkered down and listened to the 1981 album Music from The Elder several times. Like the movie Blade Runner which came out around the same time, people didn't know what to make of it. If this album came out now, I think it would be entirely different reception. So this storyline is more focused on mythology, h (W) Jeff Lemire (A/CA) Dean Ormston
In the forties, Abraham Slam faced such menaces as the psychedelic Florist and the eldritch Cthu-Lou without breaking a sweat. But keeping the heroes of Black Hammer Farm from each other's throats when his girlfriend comes to dinner proves far more perilous! Meanwhile, the Black Hammer's daughter uncovers new clues to the exiled heroes' disappearance! 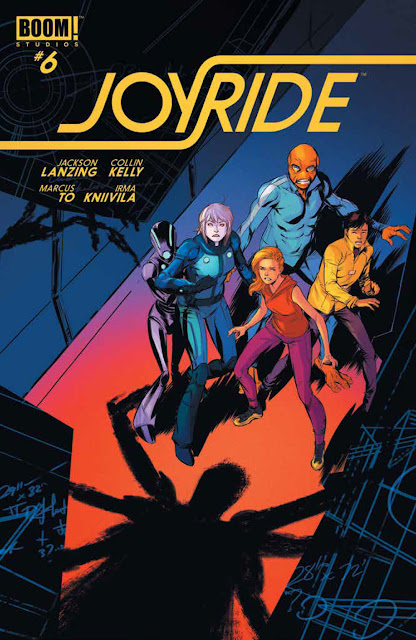 (W) Jackson Lanzing, Collin Kelly (A/CA) Marcus To
After spending so much time exploring the galaxy, the gang decides to explore the ship they've been riding in, only to discover that it has been hiding so many secrets. 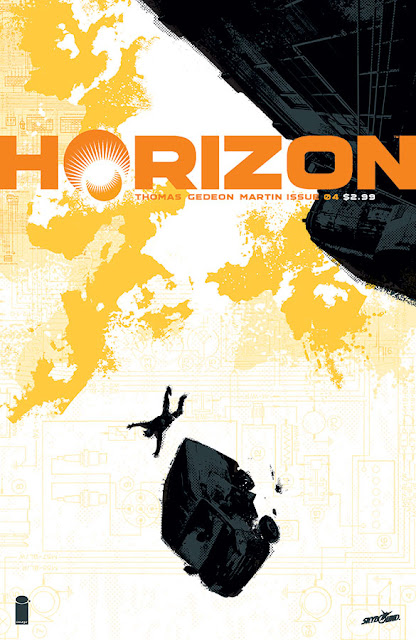 (W) Brandon Thomas (A) Juan Gedeon (CA) Jason Howard
Fleeing the law in a van armed with four explosives. One has just been deactivated. Three to go... This is Zhia Malen's new life on Earth. 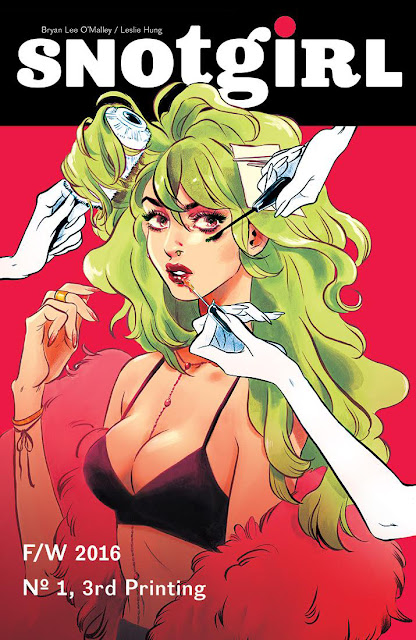