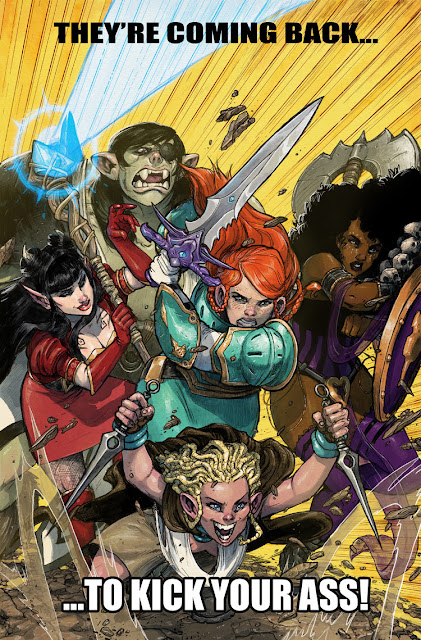 'Rat Queens' when it debuted in 2013 was a bold and refreshing take on the fantasy genre. It featured a group of hard-drinking, hard-loving maidens for hire who'd battle monsters for a price. Described as "Lord of the Rings meets Bridesmaids," Rat Queens destroyed any stereotypes of female and queer females in comics making it fun, funny, and fierce. After a tumultuous run that resulted in delays and multiple artists, Rat Queens is coming back for another volume with yet another artist looking for stability and consistency in 2017.

Creators Kurtis J. Wiebe and Roc Upchurch were riding a wave of critical and sales success garnering an Eisner nomination for Best New Series and winning a 2015 GLAAD award as the series became a fan-favorite. Their portrayal of four very different adventurers who form a tight-knit and supportive band of kick-ass warriors resonated with readers launching a bevy of fan art and cosplay. Things began to fall apart when artist Roc Upchurch was arrested on charges of domestic violence in November 2014.

Wiebe announced that Upchurch would no longer be illustrating the series.In December 2014, Image Comics announced that Stjepan Šejić would continue the series as the artist beginning with issue #9 in February 2015, preceded by a special issue about the orc warrior Braga by guest artist Tess Fowler in January 2015.After Šejić left the series in July 2015 for health reasons, Fowler continued the series as the main artist, joined by colorist Tamra Bonvillain.

In April 2016, Fowler left the title, and Wiebe paused work on it. In May 2016, Fowler wrote that Wiebe pushed her out to make room for Upchurch's return after the fourth arc. Wiebe denied this and said that the collaboration not working out creatively was the reason for Fowler's departure and the comic's hiatus.

In April 2016, Fowler left the title, and Wiebe paused work on it. In May 2016, Fowler wrote that Wiebe pushed her out to make room for Upchurch's return after the fourth arc. Wiebe denied this and said that the collaboration not working out creatively was the reason for Fowler's departure and the comic's hiatus.

The fallout left fans disappointed and let down by the amount of drama behind the scenes. Especially, with respect to Fowler's statements. We'll see if fans are ready to welcome the title with open arms. Ready or not,'Rat Queens' will be back in March with Wiebe again as the writer and new artist Owen Gieni. Check out the press release below for all the details.

“Cat Kings and Other Gary’s: Part One” begins a fresh, soft-reboot and the Rat Queens are back in action! Everybody’s favorite butt-kickers—Betty, Violet, Dee, Braga, and Hannah—return in RAT QUEENS, VOL. 2 #1. Palisade is still a rat-infested troll’s ass and everyone still hates Gary. It’s been awhile since the Queens have done a good slaughter, so join them as they get back to the basics of killing monsters and drinking away the profits.

"Owen's style brings a real return to high adventure, insane action and character comedy,” said Wiebe. “He has an amazing talent for crafting a world and when his characters act, they feel genuine and real. Writing scripts for Owen is the most fun I've had on the series in a very long time. Our new start with Rat Queens is getting back to the basics. Four friends who kill monsters for money. Except it's even weirder."

Gieni added: “Having this opportunity to bring these loved characters to life is a dream come true. I've been a fan of Rat Queens since its first issue, so it’s such an awesome experience to play in this massive world. It's the ultimate collaboration, breaking story with Kurtis, laughing the whole time as we create new adventures really comes through in the final product. I can't wait for readers to discover Rat Queens again.”

RAT QUEENS, VOL. 2 #1 will ship with two covers and will hit stores on Wednesday, March 1st.