There's a bit of a lull this week in comics as the Thanksgiving weekend approaches. A time to reflect and give thanks for our many blessings. I'm grateful for great writing and amazing art that arrives every Wednesday. It helps take us away from the harsh reality of life, inspiring new adventures, and distracting us from the ills of the world, at least, for a little while. Take a look at this week's recommendations.

I'm also thankful for every visitor to this site. Thank you all. 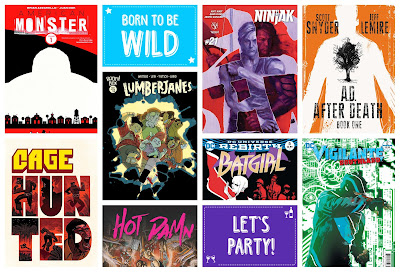 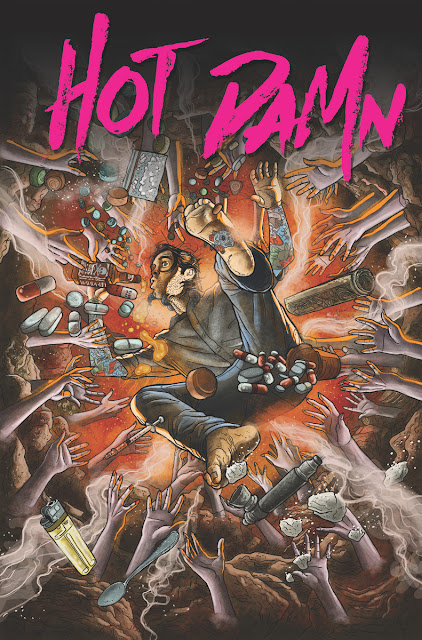 (W) Ryan Ferrier (A/CA) Valentin Ramon
Ready for a trip straight to Hell? Hard living catches up to Teddy, and eternal damnation awaits-but it's nothing like the good book tells you. Hell is a therapy session you can never leave...

(W) Greg Pak (A/CA) Mirko Colak
The Chinese gunslinger Kingsway Law just wants to escape the winged Buffalo Scout Strode and find his long-lost wife, Sonia. But today he finally meets the mysterious community that the swordswoman Ah Toy has sworn to protect-and learns their terrifying secret. Now the fate of the West lies in Kingsway's hands as he chooses between love and destiny. 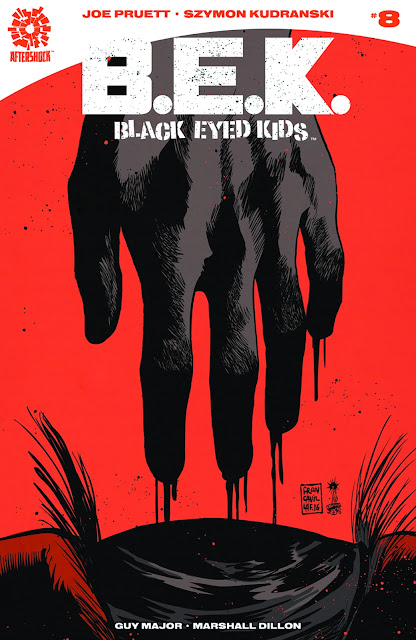 (W) Joe Pruett (A) Szymon Kudranski (CA) Francesco Francavilla
The Black-Eyed Kids have murdered his ex-wife, put his only daughter into a comma, and stolen his only son and made him one of their own. Jim Loudin has had enough! Pay back is HELL! 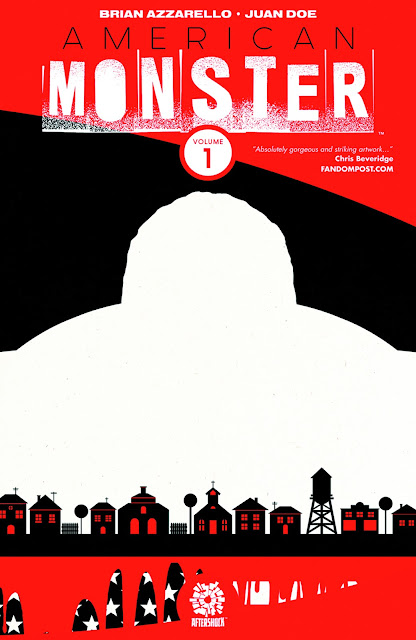 (W) Brian Azzarello (A/CA) Juan Doe
The ugliest side of humanity may be humanity's only hope.

Collecting the first five issues of Brian Azzarello's (100 Bullets, Dark Knight III) latest masterpiece, with horrifically, beautiful artwork from Juan Doe (Fantastic Four, Joker's Asylum).
In a small Midwestern town, a large man with a horribly scarred face gets off a bus, and takes a room. He spooks the locals-nobody knows him-or do they? It's impossible to say be-cause he seemingly has no face. The man's intentions remain unknown, until he takes on a corrupt sheriff and the rural crew of racist arms dealers. The town's impression of the man changes, and he's seen as a hero...until his real intentions bubble to the surface. The man isn't there to end the gang, but to take it over. And he's just getting started. 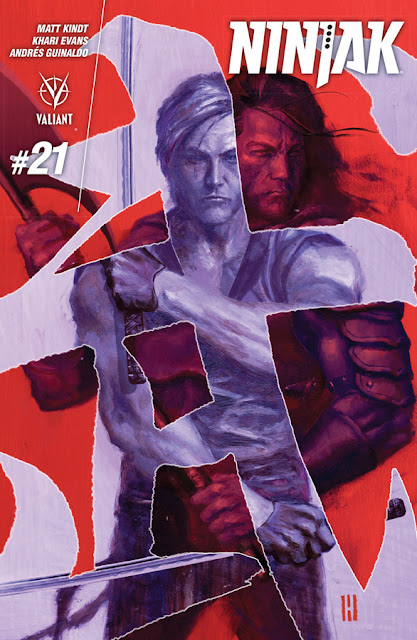 Far in the future, it's a race against the clock as two longtime allies - Ninjak and the Eternal Warrior - reteam to prevent Dr. Silk from conquering the secrets of life, death, and everything that lies in-between! But will their united might be enough to stop the lethal combination of Silk's technical prowess and criminal psychopathy?

Meanwhile, in the present, the Deadside cancer consuming Colin King presents more visions of the dark future yet to come... Will his battle across two timelines soon come full circle? 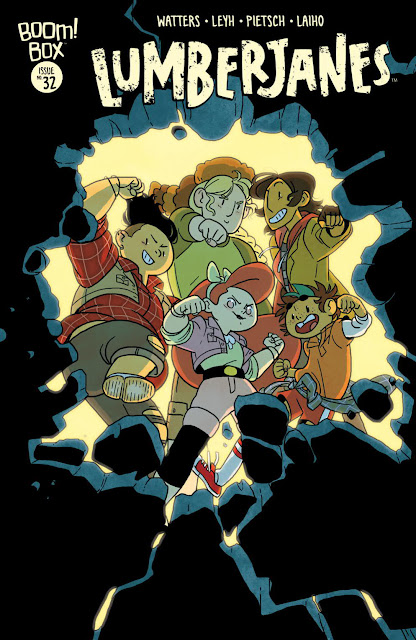 (W) Shannon Watters, Kat Leyh (A) Carey Pietsch (CA) Kat Leyh
Diane knows how to fix everything, but it might be too much to ask. Will the Lumberjanes be able to help her before everyone is turned into stone? 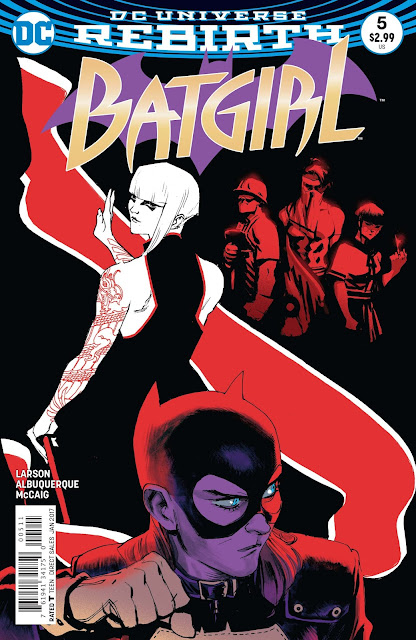 (W) Hope Larson (A/CA) Rafael Albuquerque
"BEYOND BURNSIDE" conclusion! Batgirl faces down Teacher in the streets of Shanghai, but will fists be enough against the intelligence-enhanced foe? Babs will have to conquer the pathways of her own mind in order to defeat this vicious predator once and for all! 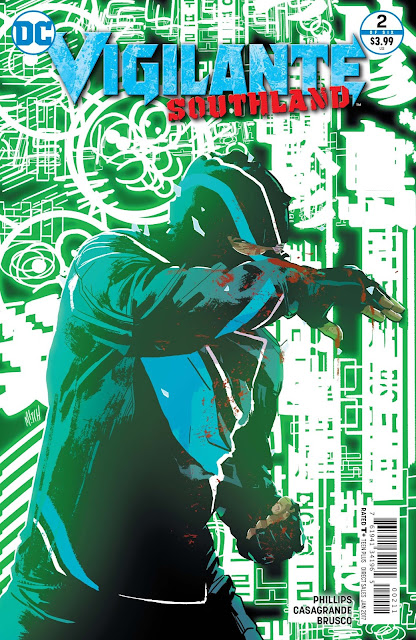 (W) Gary Phillips (A) Elena Casagrande (CA) Mitch Gerads
Donny has lost everything-his girlfriend, his home, and nearly his life-but the men who did this to him have also woken him up. To put it all back together, Donny will need to tear apart the conspiracy that rocked his world. And for that, he'll need help. Namely, the retired Los Angeles vigilante known as the Eastsider is going to teach Donny a thing or two about putting on a mask and kicking some butt. 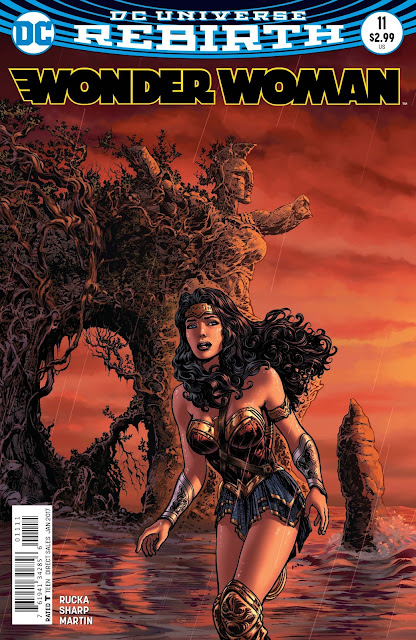 (W) Greg Rucka (A/CA) Liam Sharp
"THE LIES" part six! In the conclusion to this epic tale, the lie is revealed as Wonder Woman returns to Themyscira in the company of Steve Trevor to find that nothing has changed-and everything is wrong. 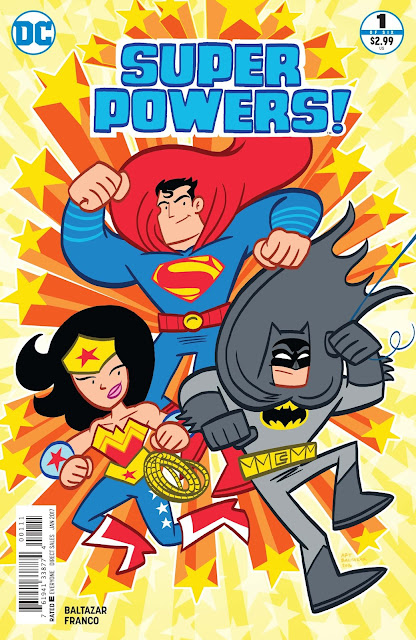 (W) Art Baltazar, Franco (A/CA) Art Baltazar
Aw yeah, the World's Greatest Heroes are back in a new, all-ages miniseries-except for Batman! Superman helps out by cleaning up in Gotham City, where he discovers a clue that sends Wonder Woman into space to find the Caped Crusader. Her journey brings her a step closer to Batman, but can she uncover the truth behind his disappearance? From the award-winning creative team that brought you TINY TITANS and SUPERMAN FAMILY ADVENTURES! 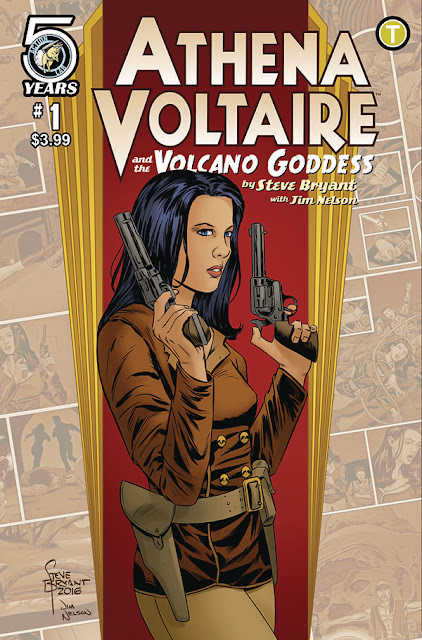 (W) Steve Bryant (A/CA) Steve Bryant
The fan-favorite pulp heroine returns in an all-new miniseries written and drawn by Eisner and Manning Award-nominated creator Steve Bryant. When her father gains possession of a legendary necklace, Athena Voltaire must save him from both strange assassins and the Nazis, who want the power the artifact could unlock! Variant cover by comics legend Michael (MADMAN) Allred! 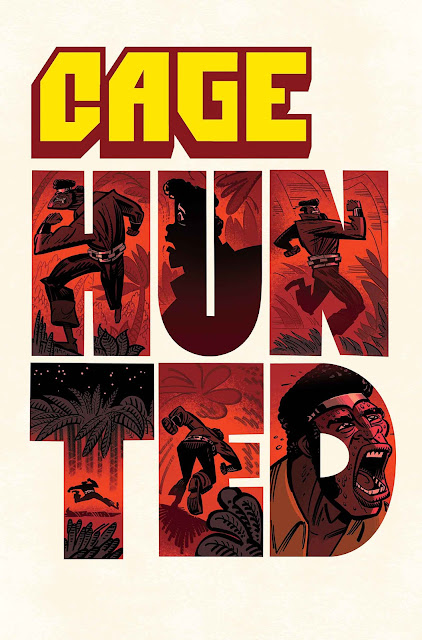 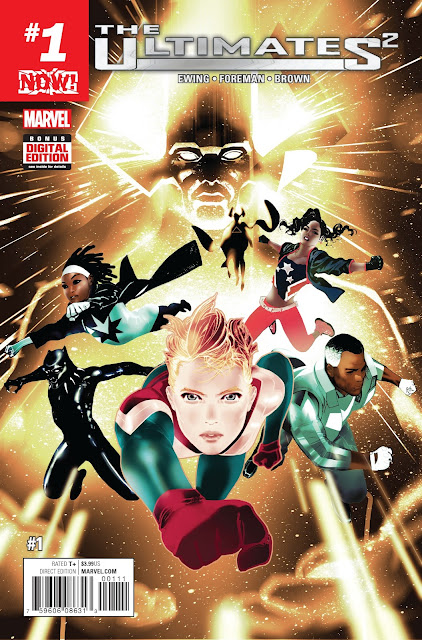 (W) Al Ewing (A/CA) Travel Foreman
Who - or what - is the Cosmic Jailer? What being is powerful enough to chain Eternity itself? That is the mystery Galactus must solve - before it's too late. Ultimate problems require ultimate solutions, and Galactus will call on those who helped cure his insatiable hunger. Captain Marvel, Black Panther, Blue Marvel, Spectrum and Ms. America! Together they are the Ultimates, protectors of the Omniverse. But now they are something more - the newest heralds of Galactus, the Lifebringer!
Rated T+ 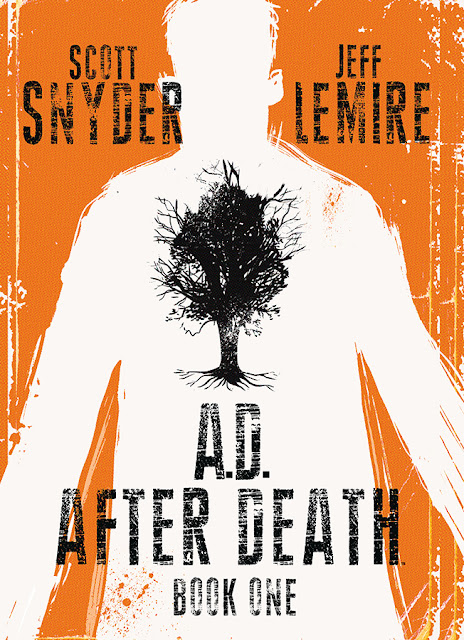 What if we found a cure for death?
Two of comics' most acclaimed creators, SCOTT SNYDER (WYTCHES, Batman, American Vampire) and JEFF LEMIRE (DESCENDER, Moon Knight, Sweet Tooth) unite to create a three-part epic like no other, set in a future where a genetic cure for death has been found. Years after the discovery, one man starts to question everything, leading him on a mind-bending journey that will bring him face-to-face with his past and his own mortality. A unique combination of comics, prose, and illustration, A.D.: AFTER DEATH will be serialized monthly as three oversized prestige format books written by SNYDER and fully painted by LEMIRE. 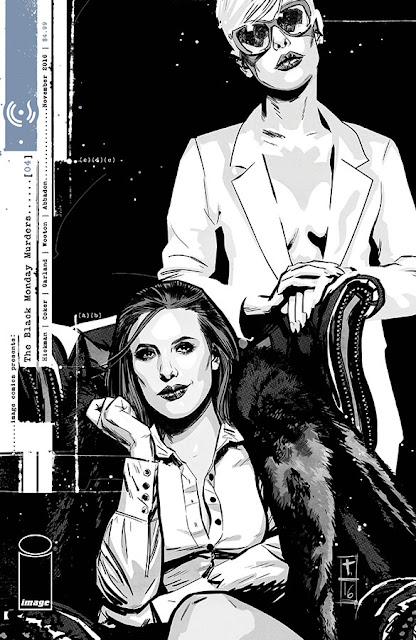 (W) Jonathan Hickman (A/CA) Tomm Coker
"BURY YOUR FAMILY, BURN YOUR ENEMIES"-Been waiting to find out just how deep the rabbit hole goes? Join us for a Rothschild funeral as the heads of the world's secret houses of money attend.
END OF ARC ONE. 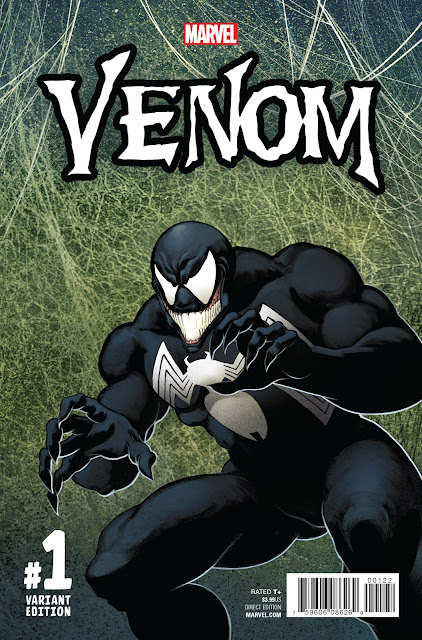 (W) Mike Costa (A) Gerardo Sandoval (CA) Todd McFarlane
Venom is back and badder than ever!
The symbiote you know and love has returned to New York City. No more "Agent of the Cosmos." No more "Lethal Protector." It's time for a new Venom, and it's great to be bad.
Rated T+ 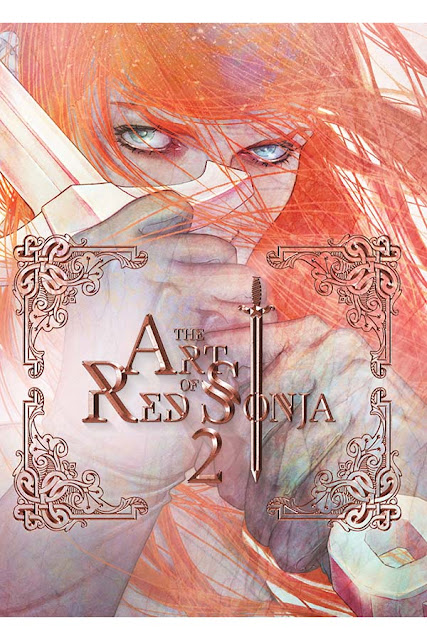 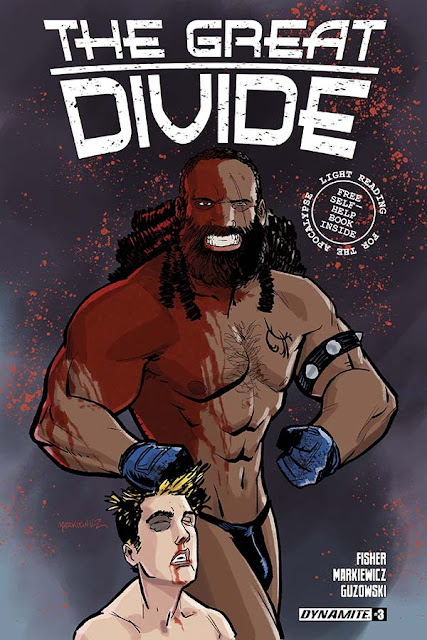 Great Divide #3
writer: Ben Fisher
artist: Adam Markiewicz
covers: Adam Markiewicz (a), Ben Dale “Homage Cover” (b)
Fans & retailers, order the cover of your choice!
FC • 32 pages • $3.99 • Mature
Paul fights for his life in the “Tiger Pit,” while Maria is forced to choose between continuing her journey to Seattle alone or risking it all to save the man who killed her brother. The mysteries of the Divide begin to unravel in this “immediately compelling … breath of post-apocalypse fresh air!” (Victor Gischler -- Deadpool Corps, X-Men). Each issue of THE GREAT DIVIDE comes with unique digital content.  Issue #3 includes a chapter from Sebastian Gibbs’ self-help guide to post-Apocalyptic serial killing!