NEW COMIC BOOK DAY 2/15 by Slidely Slideshow
Music by A Tribe Called Quest
﻿
This week sees the return of SEX CRIMINALS and Jim Lee's WILD STORM under the care of Warren Ellis and Jon-Davis Hunt. DC continues Rebirth with SUPER SONS #1 and BATWOMAN back in her own series. Don't miss other great titles like POSTAL, THE DEEP, GENERATION ZERO, WORLD OF WAKANDA, KISS, GOD COUNTRY, and so much more. Happy reading! 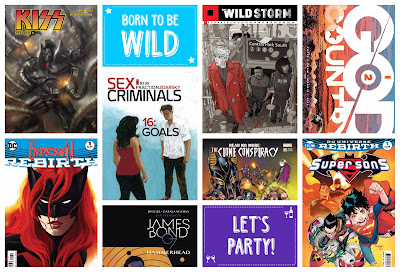 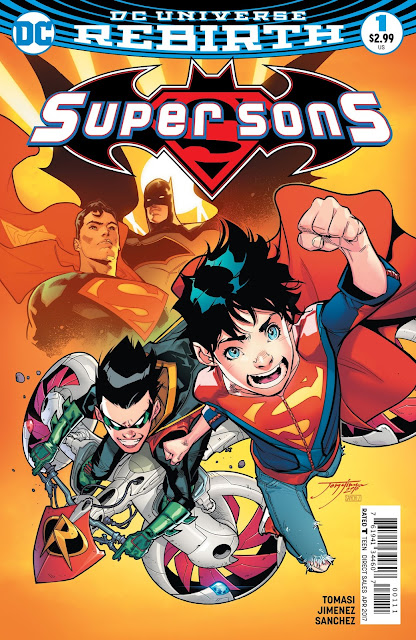 (W) Peter J. Tomasi (A) Jorge Jimenez
"When I grow up" part one! The sons of Batman and Superman have graduated to their own monthly comic-but if they want to survive, they're going to have to share it! Writer Peter J. Tomasi (BATMAN & ROBIN, SUPERMAN) teams with rising-star artist Jorge Jimenez (EARTH 2) to bring you the adventures of the World's Smallest. This debut issue looks at the lives of Robin and Superboy and their destiny to follow in their fathers' footsteps, while we meet a new villain whose ascension parallels the boys' own understanding of their powers-except that he believes it's his right to rule over every being on the planet! 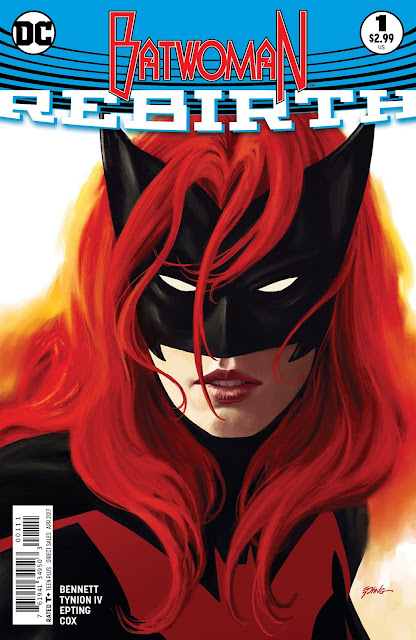 (W) Marguerite Bennett, James Tynion IV (A) Ben Oliver, Steve Epting
The newest chapter of Batwoman's life begins here! Monster Venom is the hottest new bioweapon on the market...and to break up the syndicate spreading it around the world, Batwoman's going to have to return to the place where she spent some of her darkest hours! Learn where Batwoman comes from, and where she's going, in this one-shot prologue to the first big Batwoman epic, "The Many Arms Of Death"! 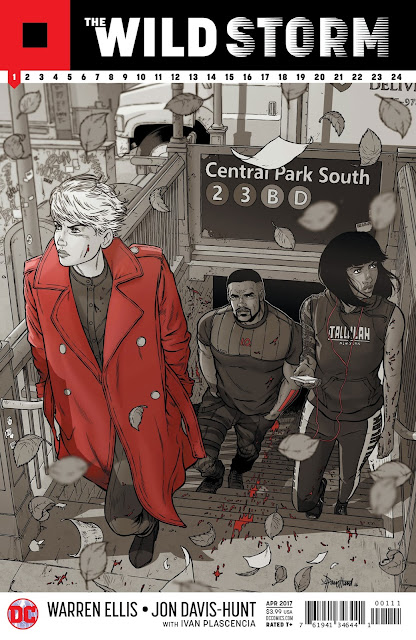 (W) Warren Ellis (A) Jon Davis-Hunt
A troubled woman, barred by her employer from continuing her research, walks miserably through New York City. It takes her a moment to notice that everybody else is looking up. A man has been thrown from the upper floor of the Halo skyscraper. And that woman-Angela Spica, sick from the transhuman implants she's buried in her own body-is the only person who can save him. What she doesn't know is that the act of saving that one man will tip over a vast and secret house of cards that encloses the entire world, if not the inner solar system. This is how the Wild Storm begins, and it may destroy covert power structures, secret space programs and even all of human history. New York Times best-selling writer Warren Ellis (TRANSMETROPOLITAN, RED, PLANETARY) returns to DC to curate Jim Lee's WildStorm world, with this debut issue resetting the WildStorm universe with new iterations of Grifter, Voodoo, the Engineer, Jenny Sparks and others. 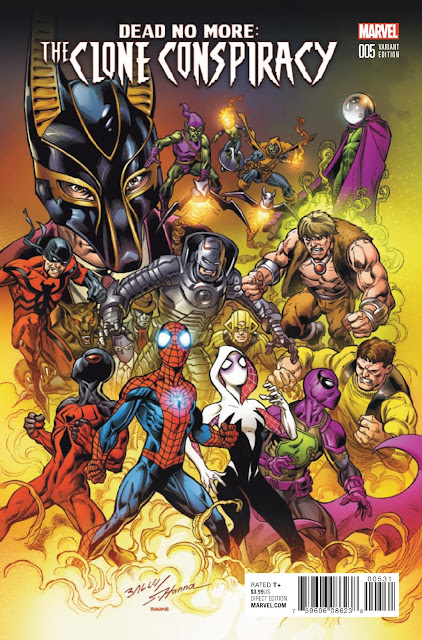 The Clone Conspiracy #5 THE EPIC CONCLUSION!
(W) Dan Slott (A) Jim Cheung
THE SPIDER-EVENT OF THE YEAR CONCLUDES!
•  The Jackal takes drastic measures that Spider-Man, Spider-Gwen and Scarlet Spider could never see coming.
•  Jackal's coup de grâce not only sets a host of resurrected villains loose on the unsuspecting streets of San Francisco, but threatens the lives of everyone on Earth!
•  After months of waiting, heartache and incredible surprises, THIS is the issue Spider-fans around the world will be talking about for years to come! 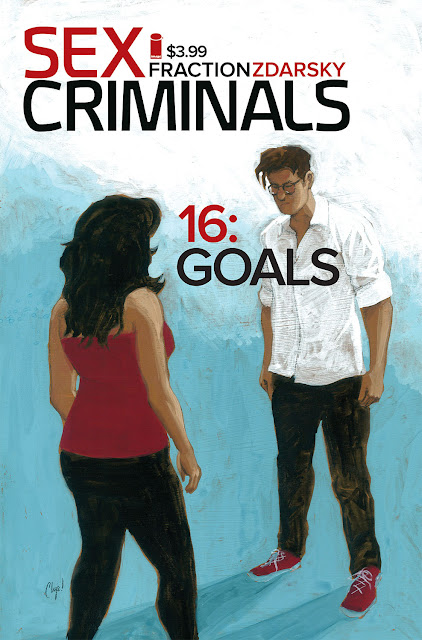 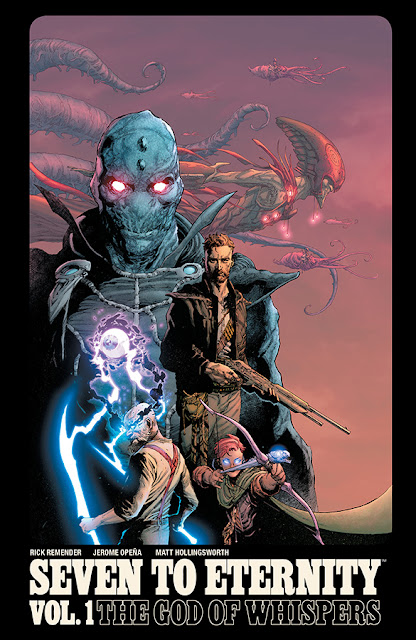 The God of Whispers has spread an omnipresent paranoia to every corner of the kingdom of Zhal; his spies hide in every hall spreading mistrust and fear. Adam Osidis, a dying knight from a disgraced house, must choose between joining a hopeless band of magic users in their desperate bid to free their world of the evil God, or accepting his promise to give Adam everything his heart desires. Writer RICK REMENDER reteams with collaborators JEROME OPEÑA (Uncanny X-Force, Fear Agent) and MATT HOLLINGSWORTH (TOKYO GHOST, WYTCHES) to take you on a hard road through the strange fantasy world of Zhal. All men have surrendered their freedom for fear, and now one last free man must choose. Collects SEVEN TO ETERNITY #1-4.
Cover Price: $9.99 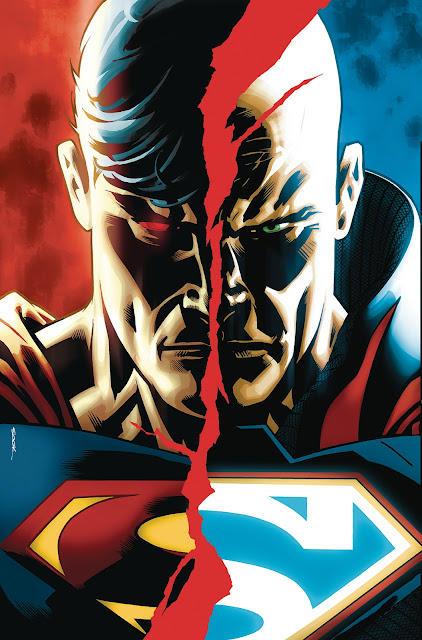 Superman Action Comics (Rebirth) Vol 01 Path of Doom TP
(W) Dan Jurgens (A) Patrick Zircher & More
Superman returns to Metropolis just in time to meet the city's newest protector: Lex Luthor. But it's not long before these dueling titans meet someone unexpected: Clark Kent?! The two archenemies must put aside their differences to face the common threat of Doomsday, as Jimmy Olsen and the staff of the Daily Planet try to uncover the truth: Who is the man claiming to be Clark Kent? Collects ACTION COMICS #957-962.
Cover Price: $16.99 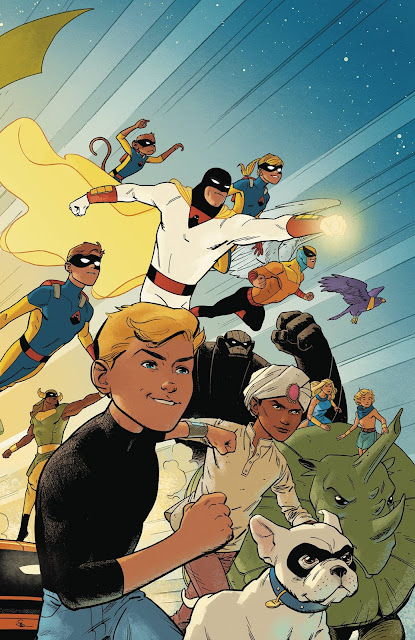 Future Quest Vol 01 TP
(W) Jeff Parker (A) Evan "Doc" Shaner, Steve Rude
When worlds collide, it's up to Hanna-Barbera's best-known action heroes to save the day! Johnny Quest, Space Ghost, the Herculoids and more are reimagined in this new collection! When Jonny Quest and his adoptive brother Hadji make a startling discovery in the swamplands of Florida, they are pulled into an epic struggle between the Space Rangers and a dangerous villain who threatens the galaxy. Now, it's up to the combined forces of Jonny Quest, Space Ghost, the Herculoids, Birdman, Frankenstein Jr., the Impossibles, the Galaxy Trio and Mightor to stop him and save their universe! Collects FUTURE QUEST #1-6!
Cover Price: $16.99 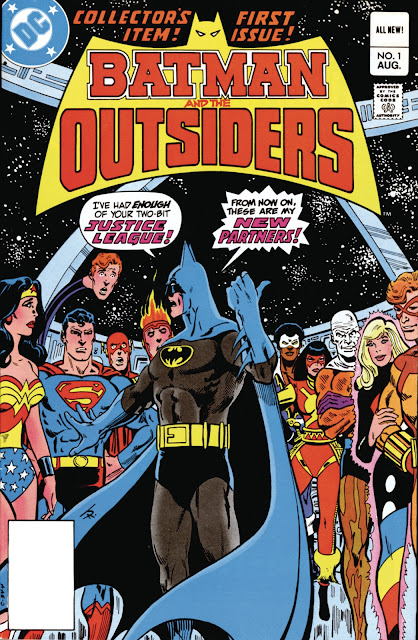 In these tales from the 1980s, Batman splits off from the Justice League of America to form his own super-team known as the Outsiders. Including established heroes Black Lightning and Metamorpho as well as dynamic new heroes Katana, Geo-Force and Halo, the team fought for justice on an international stage. Combining superhero action with espionage, the Outsiders brought their own brand of justice to Geo-Force's nation of Markovia, Katana's homeland of Japan and across the globe. This new title collects stories from THE BRAVE AND THE BOLD #200 and NEW TEEN TITANS #37, plus BATMAN AND THE OUTSIDERS #1-12.
Cover Price: $49.99 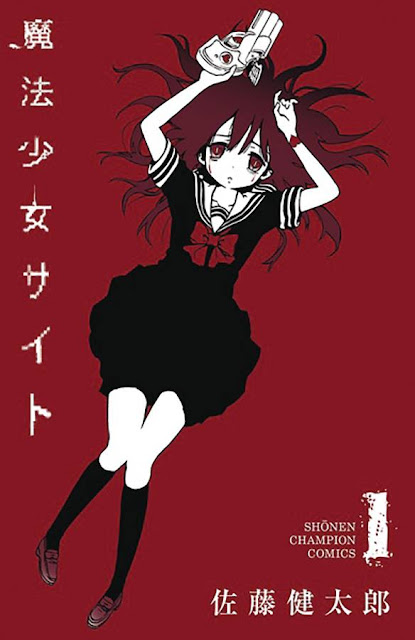 Magical Girl Site GN Vol 01
(W/A/CA) Sato Kentaro
The much-anticipated spin-off series to Magical Girl Apocalypse! In this ultra-violent survival story, an innocent girl gets sucked into the murderous world of the sailor girls from hell as featured in Magical Girl Apocalypse. Asagiri Aya is a young girl who has fallen victim to bullies at her school. Looking for a way to escape her troubles, she looks to the internet for distraction, when a mysterious website called "Magical Girl Site" appears. Simply viewing the page is all it takes to hurtle Aya headlong into the deadly world of the Magical Girl Apocalypse. There, it's fight or die, against a seemingly endless array of savagely adorable, frilly-skirted killing machines, each armed with magical powers and an unquenchable thirst for blood and chaos.
Cover Price: $49.99 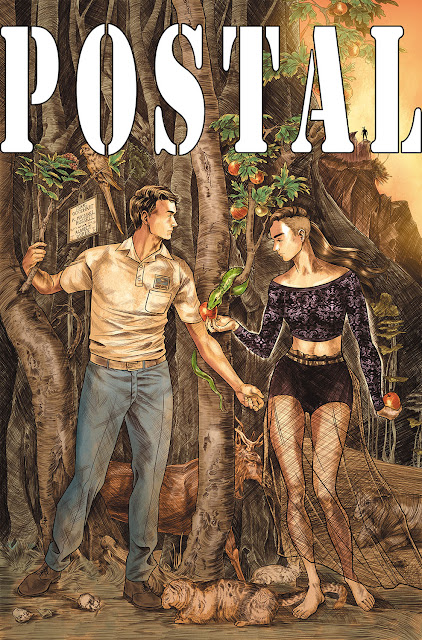 (W) Bryan Hill (A/CA) Isaac Goodhart
Mark discovers a force within Eden that wants to take control from him and his mother. Bremble is pushed further into madness by Isaac Shiffron, and discovers a truth that will cause war between Eden and the FBI. Justice lives inside Mark, but so does cruelty, and with Maggie and Molly pulling him in different directions, Mark will have to choose what kind of man he will become. 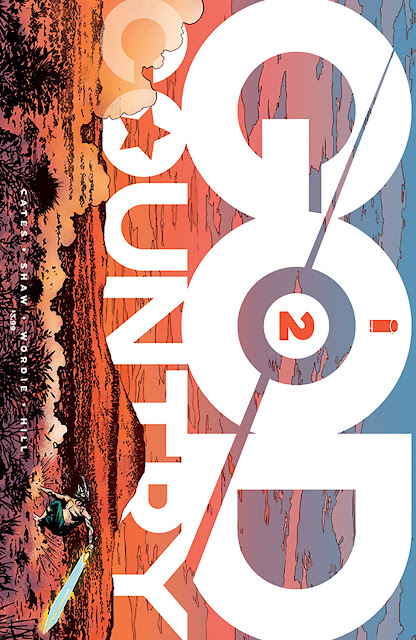 (W) Donny Cates (A/CA) Geoff Shaw
As Emmett Quinlan attempts to rebuild his family and his home after the devastating tornado that broke them, something otherworldly screams through the sky under a banner of WAR. The GODS have come to Texas-- and they do not intend to leave it empty handed... 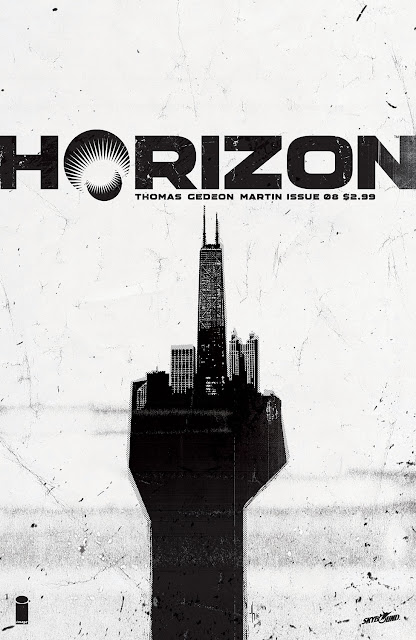 (W) Brandon Thomas (A) Juan Gedeon (CA) Jason Howard
"WEATHER ALERT STATUS: ORANGE"-Chicago braces for a superstorm as Zhia Malen kicks off the next phase of her invasion. But the connection between her world and Earth runs deeper than she imagined, making this planet hostile to EVERY species in the galaxy. 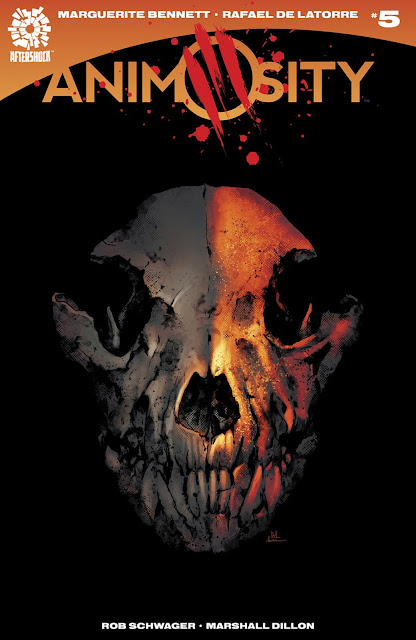 (W) Marguerite Bennett (A/CA) Rafael de Latorre
A safe haven looms on the horizon, but the walled city will not take all of Jesse and Sandor's companions. Who will live, and who will die to save the pack?
Another action-packed issue brought to you by MARGUERITE BENNETT (DC Comics' Bombshells & Marvel's A-Force) with beautiful art by SuperZero's RAFAEL DE LATORRE! 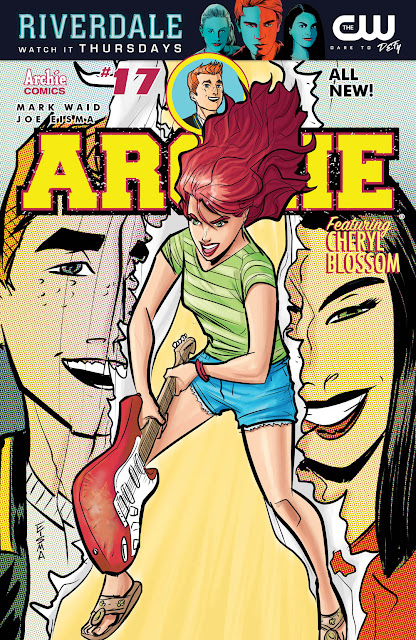 (W) Mark Waid (A/CA) Joe Eisma
Cheryl Blossom's unleashed on Riverdale, creating chaos and tumult at her whim! Only Veronica can stop her - but how will she get back from her Swiss boarding school in time to save her friends? 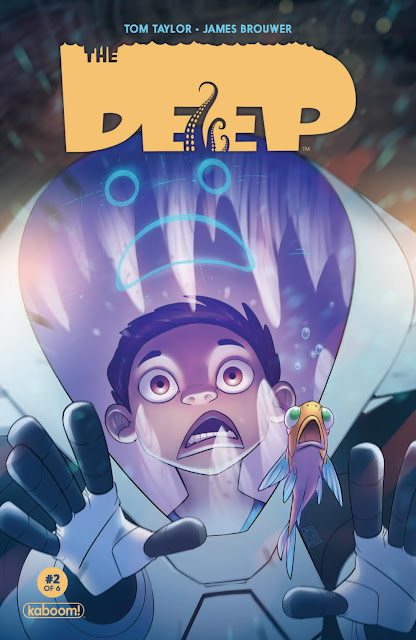 (W) Tom Taylor (A/CA) James Brouwer
The youngest Nekton comes face-to-face with the mysterious sea creature that has risen from the depths of the ocean near Greenland. 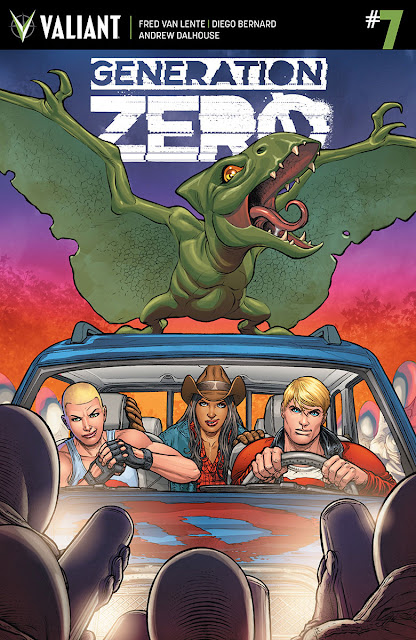 Tap into the uncharted plane of reality called the Heroscape and you can see the world through anyone else's eyes - and find out how their reality is governed by their own inspirations! Now, as a mysterious force preys upon Rook's citizens, Animalia must enter the Heroscape...and experience a world filtered through her own twisted imagination! But as Generation Zero's most militant adolescent wunderkind enters a world populated by colorful monstrosities of her own design, Animalia must lock horns - literally - with demons both outward and within! 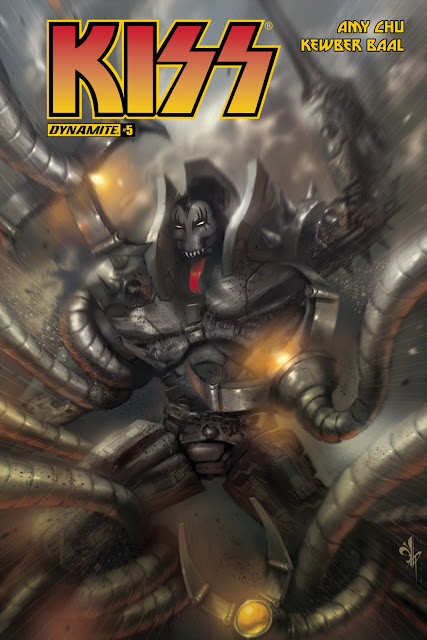 (W) Amy Chu (A) Kewber Baal (CA) Lucio Parillo
Things are heating up fast, and when we say heat, we mean HOT-the ventilation system is broken and the city is running out of air! Meanwhile, Noa and Eran are still reeling from the revelations about their past. The four friends must reconcile their differences to save everyone, and with the help of MORPHEUS, solve the big mystery of Blackwell before it's too late. 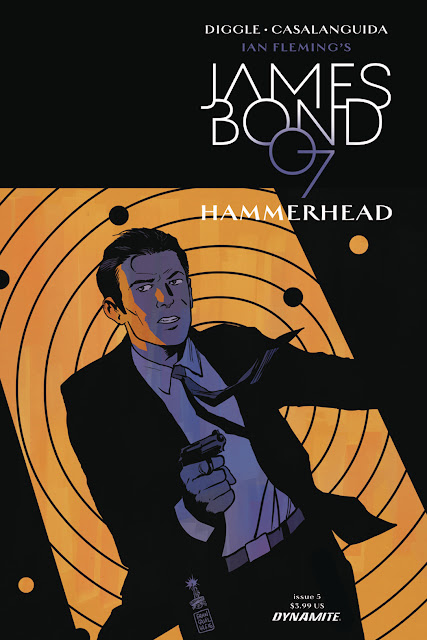 Kraken's trap is sprung-and M and Moneypenny are caught in its jaws! As the Royal Navy moves in to retaliate, James Bond leads a covert Special Boat Squadron unit on a suicide mission to infiltrate a nuclear reprocessing facility. But time is running out. The nukes are flying, and death is only a trigger-pull away... 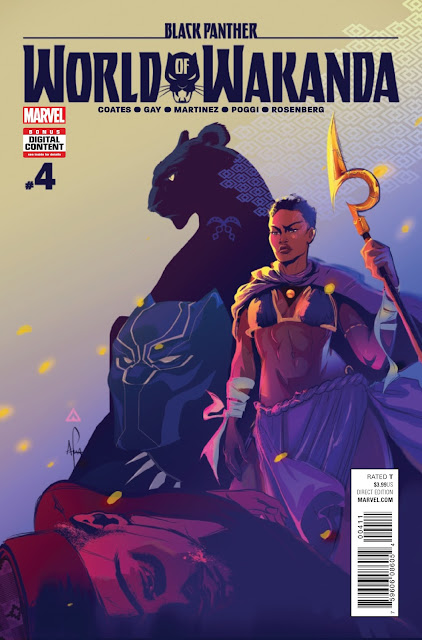 (W) Ta-Nehisi Coates, Roxane Gay (A) Alitha Martinez (CA) Afua Richardson
"DAWN OF THE MIDNIGHT ANGELS" CONTINUES!
•  With their king shamed and their queen dead, Ayo and Aneka take justice into their own hands....
•  Learn the secrets behind the events that led into the 2016 sales smash BLACK PANTHER #1!
Rated T