Another great week of comics is upon us. 'Charmed' #1, 'Nancy Drew and the Hardy Boys' #1, 'Street Tiger' #1, 'Sky Doll' #1, 'Grass Kings' #1, and 'Man-Thing' #1 make up this week's debuts. 'Copperhead' #11 marks the return of the series after a break with creator Jay Faerber and new artist Drew Moss. As for on-going titles, you can't go wrong with BATGIRL AND THE BIRDS OF PREY, JONESY, MOTOR CRUSH, WONDER WOMAN, ALL-NEW WOLVERINE, JOHN CARTER, LADY KILLER, INFINITE 7, and GIANT DAYS TPB. Happy reading! 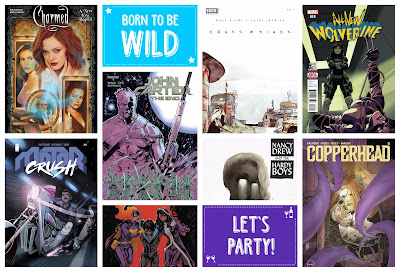 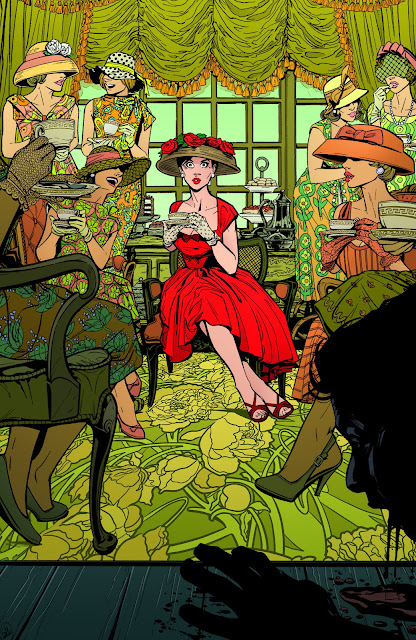 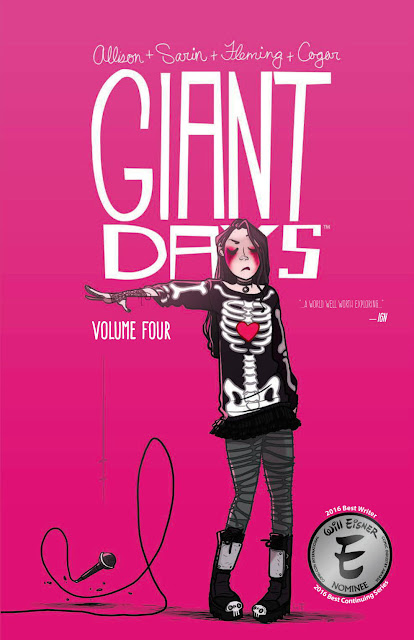 (W) John Allison (A) Max Sarin (CA) Lissa Treiman
It's springtime at Sheffield University-the flowers are blooming, the birds are singing, and fast-pals Susan, Esther, and Daisy continue to survive their freshman year of university. Susan is barely dealing with her recent breakup with McGraw, Esther is considering dropping out of school, and Daisy is trying to keep everyone and everything from falling apart! Combined with house-hunting, indie film festivals, and online dating, can the girls make it to second year? Collects issues #13-16. 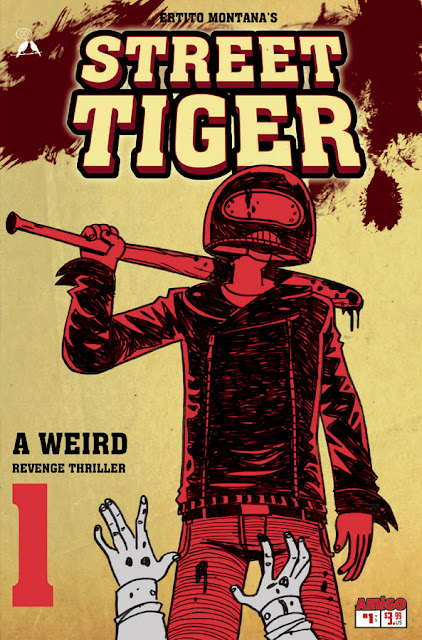 (W) Ertito Montana (A/CA) Ertito Montana
Nam City is a dangerous place, and now it is even more. Members of different criminal organizations are being found dead. The police fear a gang war, but rumors are spreading about one man waging a solo war against crime. A man with a bike helmet, a leather jacket, and the symbol of a Tiger! A hectic ride that will take you to the 80's exploitation movies! 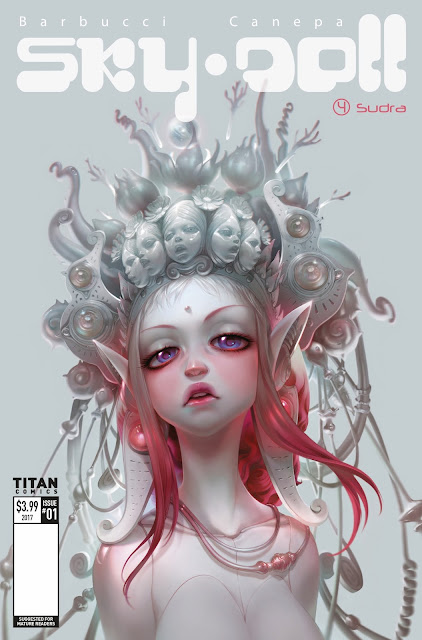 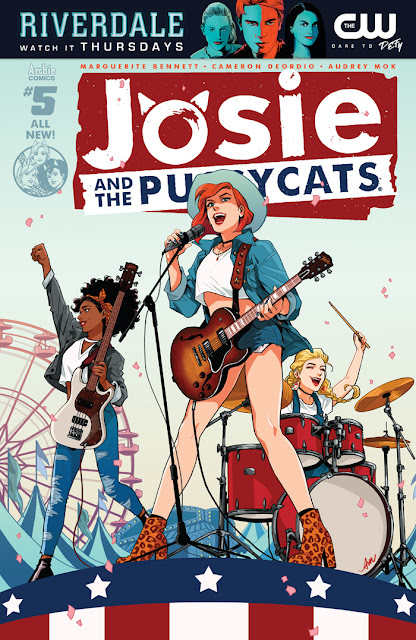 (W) Marguerite Bennett, Cameron Deordio (A/CA) Audrey Mok
Josie and the Pussycats play at a State Fair! Josie has her sights set on recording with famous country star Cheri Overwood - but a newcomer to the music scene, Felicity Mountain, has stolen the Pussycats' spotlight. The girls might just miss their chance at the big time, unless Josie, Valerie and Melody can unearth the shocking truth about the Felicity! 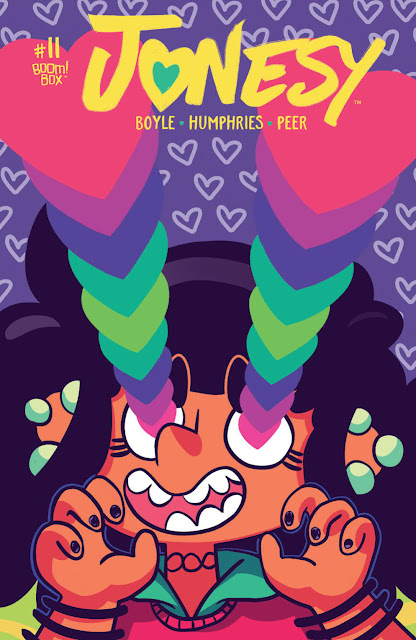 (W) Sam Humphries (A/CA) Caitlin Rose Boyle
The only thing bigger than her hair is her personality! Jonesy keeps on dancing to the beat of her own electric-colored drum in the latest issue of this much-adored series. 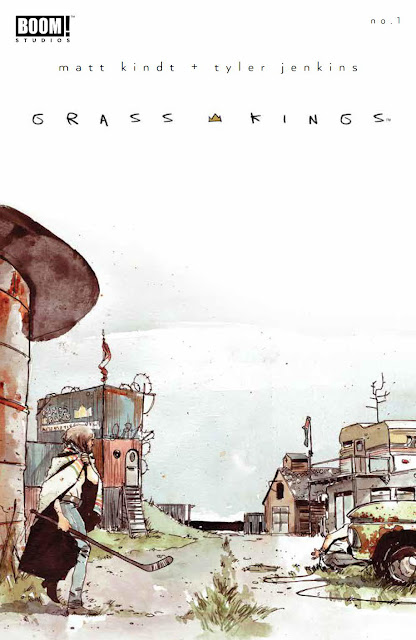 (W) Matt Kindt (CA) Matt Kindt (A/CA) Tyler Jenkins
From The New York Times bestselling writer Matt Kindt (Mind MGMT) and Peter Panzerfaust artist Tyler Jenkins comes a rural mystery series chronicling the tragic lives of the Grass Kings, three brothers and rulers of a trailer park kingdom, a fiefdom of the hopeless and lost, of the desperate poor seeking a promised land.
Eldest brother Robert leads a grief-stricken life, having lost his daughter to a tragic accident, followed by his wife disappearing one morning never to return.
When an enigmatic young woman named Maria flees to their community in search of safe haven, Robert takes her in. Will his decision lead to ruin and retribution dooming the Kingdom?
Perfect for fans of True Detective Season One or Scalped.
?    Oversized, prestige format first issue featuring 30 pages of story! 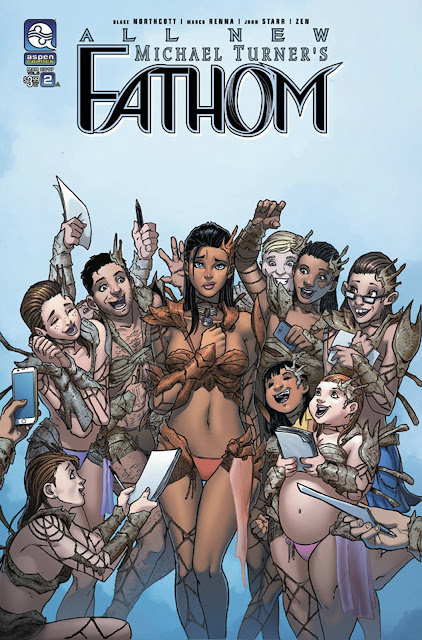 (W) Blake Northcott (A/CA) Marco Renna
Dive back into the world of MICHAEL TURNER'S FATHOM! Aspen Matthews learns that saving countless lives has unexpectedly hindered her own life-as the rest of the world attempts to learn more about her recent heroics. However, the destructive peril she dispatched of returns in new, unexpected-and deadly ways! 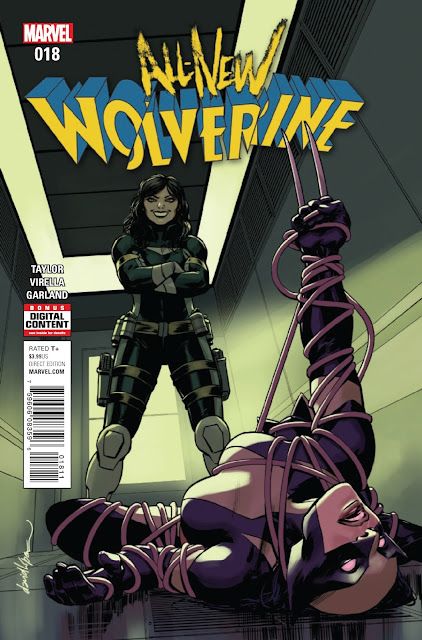 (W) Tom Taylor (A) Nicole Virella (CA) David Lopez
ENEMY OF THE STATE II CONCLUDES!
•  With her allies at her back, WOLVERINE will face off against her oldest enemy...one last time.
•  It's LAURA versus KIMURA, and only one will walk away.
•  Guest starring ANGEL, GAMBIT, NICK FURY and MORE!
Rated T+ 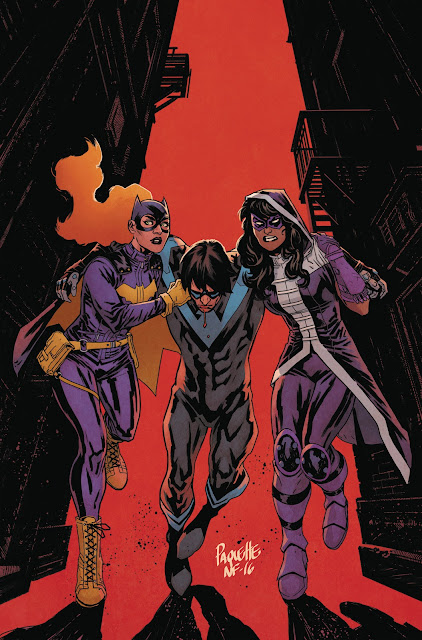 BATGIRL AND THE BIRDS OF PREY #8
(W) Julie Benson, Shawna Benson (A) Roge Antonia (CA) Yanick Paquette
"Blackbird" part one! There's something strange afoot in Gotham City - someone's making promises to the world's deadliest killers, offering them things well beyond the powers of a mortal human to provide! Unfortunately, Nightwing's been caught in the crossfire and is badly hurt... good thing he's not the exact person whose presence is most likely to make things weird between Batgirl and Huntress, right? 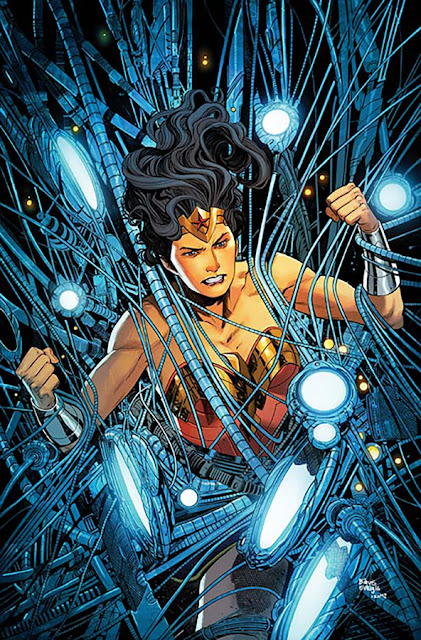 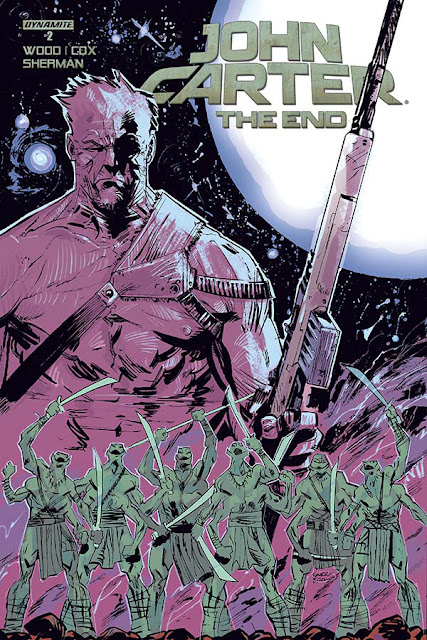 (W) Brian Wood, Alex Cox (A) Hayden Sherman (CA) Garry Brown
MARS AT WAR. After crash-landing on the ravaged planet, circumstances separate John Carter and Dejah...both literally and ideologically. Despite their centuries of marriage, can a born warrior and Queen survive this most desperate challenge? 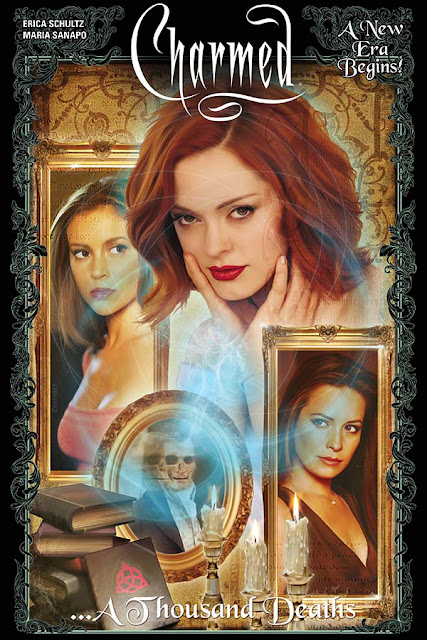 (W) Erica Schultz (A) Maria Sanapo (CA) Joe Corroney
Balancing work, witchcraft, and a life is never easy, and the Charmed Ones are stretched too thin. Meanwhile, a demon in the Underworld rallies the troops with a plan to take out the Charmed Ones forever. 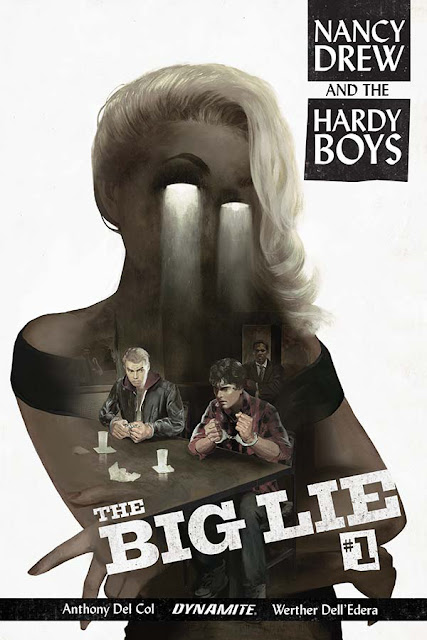 (W) Anthony Del Col (A) Werther Dell'Edera (CA) Fay Dalton
THE BIG LIE is a Nancy Drew and Hardy Boys mystery unlike any other you've ever read...

When the teenage brothers Frank and Joe Hardy are accused of the murder of their father - a detective in the small resort town of Bayport - they must team up with the femme fatale Nancy Drew to prove their innocence (and find the real guilty party in the process) in a twisting, hard-boiled tale, complete with double-crosses, deceit and dames.
Inspired by new crime classics like Ed Brubaker's Fatale and Darwyn Cooke's Parker series, writer Anthony Del Col (Assassin's Creed, Kill Shakespeare) and artist Werther Dell'Edera (Batman: Detective Comics, House of Mystery) bring the iconic teen detectives into the modern age, and redefine noir for a new generation of readers! 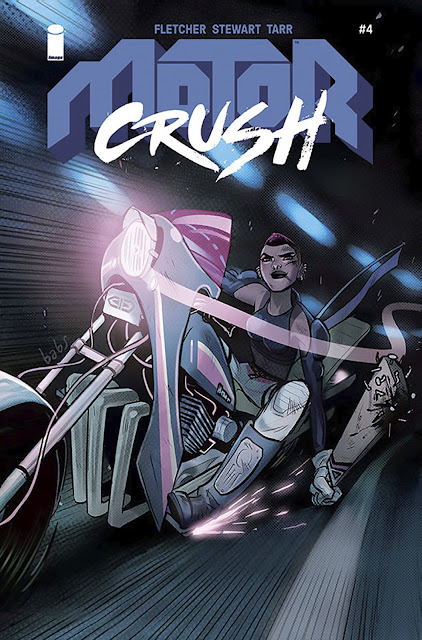 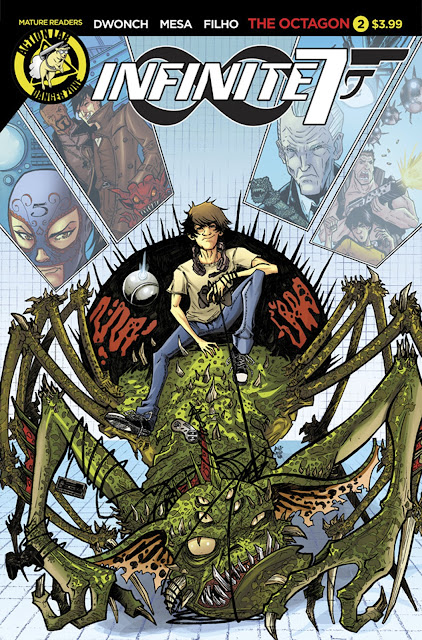 (W) Dave Dwonch (A) Geraldo Filho (A/CA) Arturo Mesa
Somehow Anthony Zane has killed top assassin, Smash Brannagan. Now he has 72 hours to prove that he is a worthy replacement... and his fate will be decided in THE OCTAGON. NOTE:  Covers C and D interlock with 5 covers to be released throughout the first arc to form a MASSIVE Infinite Seven Poster! 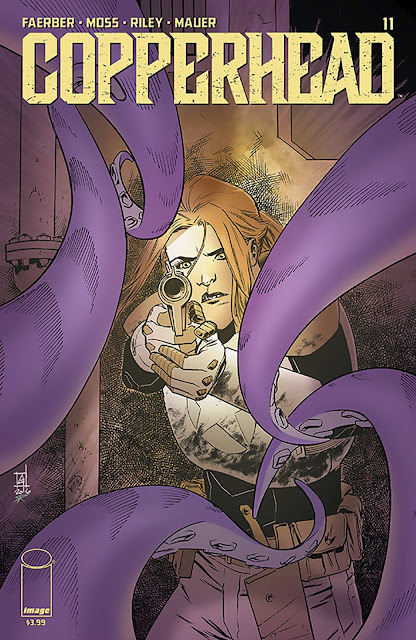 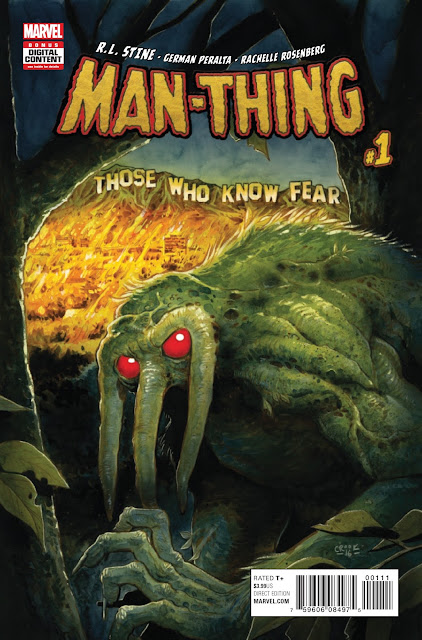 (W) R. L. Stine (A) German Peralta, Daniel Johnson (CA) Tyler Crook
MARVEL WELCOMES R.L. STINE!
Beloved writer R.L. STINE (Goosebumps, Fear Street) brings his special brand of horror to MAN-THING!
After working for years, MAN-THING has regained his ability to speak and has taken Hollywood by storm...But when an ancient and mysterious danger threatens the swamp, Man-Thing is going to have to choose between his new life and celebrity, and the world he used to call home...
PLUS! A bone-chilling new horror story, written by the master himself, R.L. STINE, and illustrated by the incomparable Daniel Warren Johnson!
Parental Advisory