If you like dystopian future worlds and heroes of all kinds this week in comics is just for you. Image Comics seems to be a haven for apocalyptic storytelling and they do it as well or better than any other publisher. Out Wednesday are Eclipse and Horizon which blend sci-fi, action, horror, and adventure in two great packages. Look out for Blood Stain trade, God Country, Sex Criminals, and more. Also, pick up Archie, All-Star Batman, All-New Soulfire, Vampirella, Batwoman, The Deep, Wonder Woman Meets the Bionic Woman, Dollface, James Bond, Totally Awesome Hulk, Red Sonja, and so much more. Happy reading! 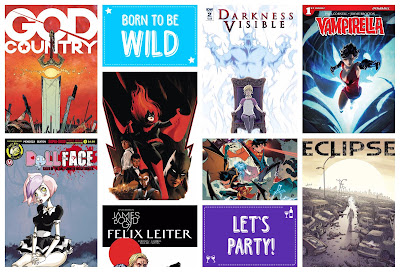 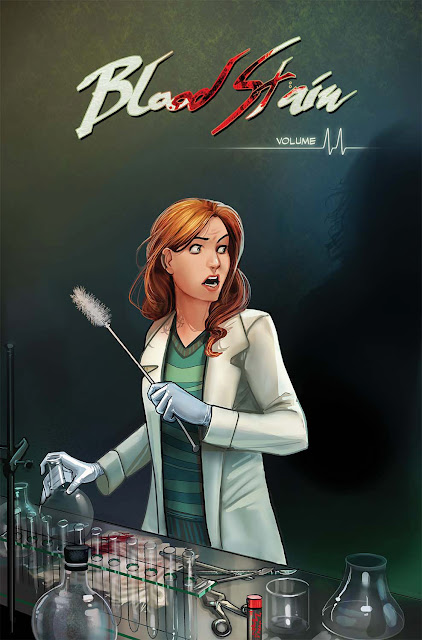 (W) Linda Sejic (A/CA) Linda Sejic
Upon arriving at her new workplace, and meeting her new boss under some rather unflattering circumstances, Elly tries desperately to make a good impression on her first day on the job. The only problem is, both she and her new employer seem to be clueless as to what her job is supposed to be. 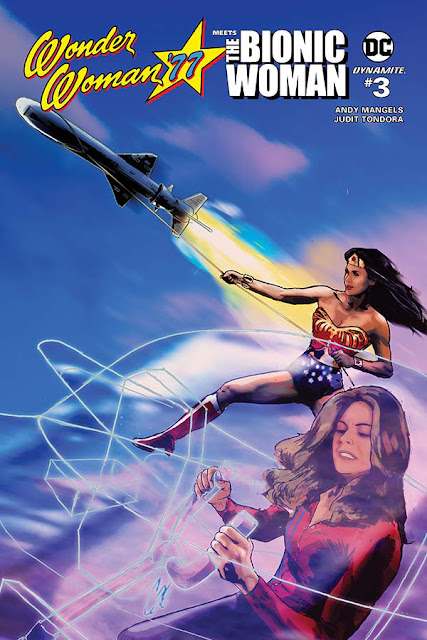 (W) Andy Mangels (A) Judit Tondora (CA) Cat Staggs
The Original Girl Power! Catching a missile after its launch is the least of the trials facing Diana Prince (aka Wonder Woman) and Jaime Sommers (The Bionic Woman)!  Now, their greatest television enemies have joined forces, and they're building an army for their master plan! Wonder Woman and the Bionic Woman prepare for a trip to South America - passing through the Bermuda Triangle as they go - but the villains have other schemes. All this, plus the return of Max, the Bionic Dog!
Written by best-selling author ANDY MANGELS (Star Trek & Star Wars) and illustrated by JUDIT TONDORA (Grimm Fairy Tales), WONDER WOMAN '77 MEETS THE BIONIC WOMAN has set the mainstream and internet media on fire... and the publicity keeps running! 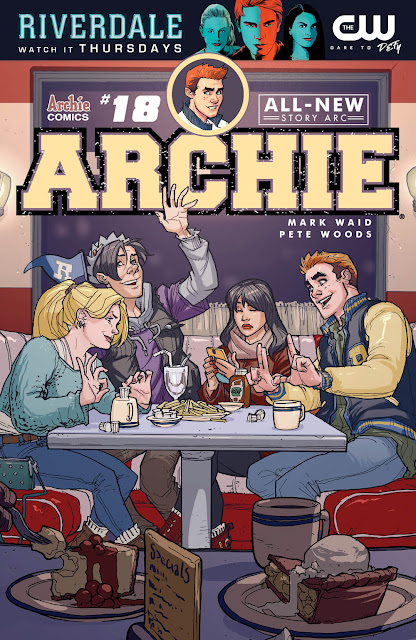 (W) Mark Waid (A/CA) Pete Woods
New Story Arc! The Blossom Twins have found out their father has been lying to them about why they moved to Riverdale. It's up to Detective Jughead to learn the dark truth behind the Blossom Family! Join us as we welcome new Archie series artist Pete Woods (Deadpool, Robin). 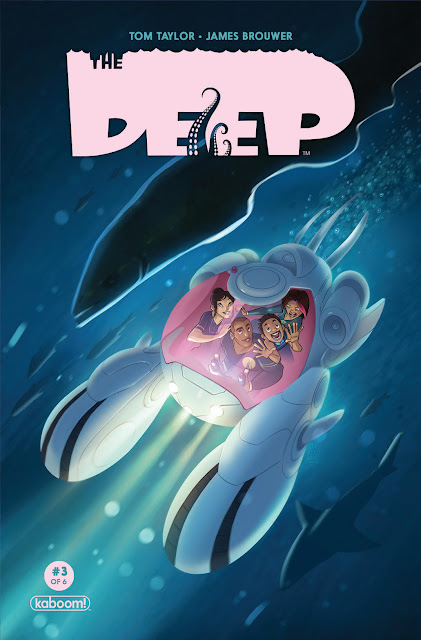 (W) Tom Taylor (A/CA) James Brouwer
The Nekton Family comes face to teeth with the mysterious creature they've been searching for and it's up to Ant and Jeffrey to save the day! 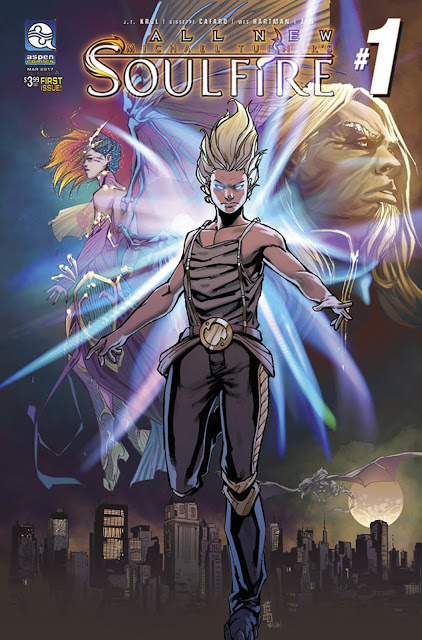 (W) J. T. Krul (A/CA) Giuseppe Cafaro
Aspen's premiere action-adventure fantasy epic returns in this all new jumping-on point for new readers! Following the events of ASPEN UNIVERSE: REVELATIONS, the world of SOULFIRE has a new status quo, as magic and technology have intertwined as never before! Meanwhile, Soulfire's Grace, Malikai and friends now must also discover that things are not as they seem in the year 2211-including new-and old-dangers that seek to eliminate them! Nearly fifteen of the best-selling series created by superstar artist, the late Michael Turner, have culminated in this brand-new SOULFIRE adventure by Aspen's talented creative team! Please join writer JT Krul, artist Giuseppe Cafaro, and colorist Wes Hartman as they bring readers back to the magic, myth, and everything you loved about SOULFIRE! 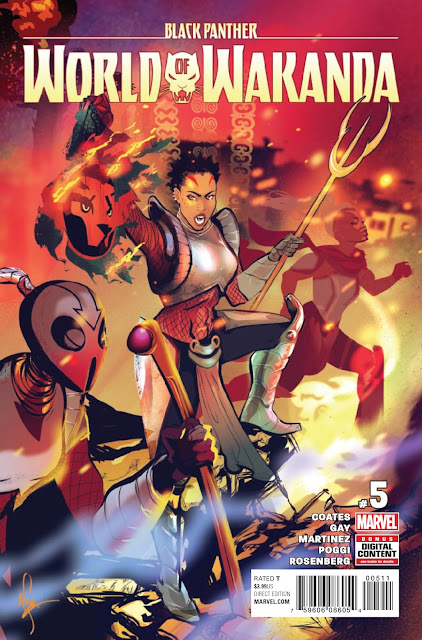 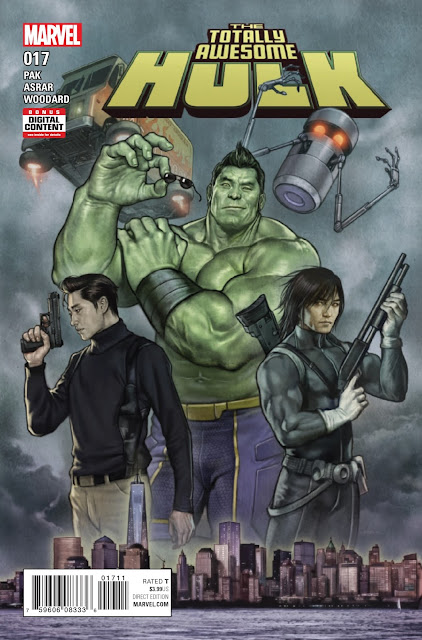 (W) Greg Pak (A) Mahmud A. Asrar (CA) Stonehouse
"BIG APPLE SHOWDOWN" CONTINUES!
•  A tale too big for the Big Apple! Extraterrestrial action how you like it!
•  Hulk and his new friends Ms. Marvel, Silk, Shang Chi, Jimmy Woo and Jake Oh take the fight into space!
Rated T 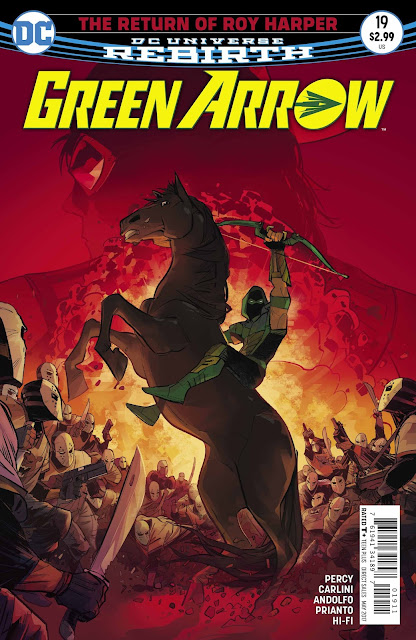 (W) Ben Percy (A) Eleonora Carlini (CA) Otto Schmidt
"REUNION" finale! Orphaned as an infant and raised on a Navajo reservation, the superhero Arsenal returns to his adopted home to defend it from a violent militia hired by... Queen Industries?! Oliver Queen's company has been up to no good since his supposed death, but Green Arrow is on the scene to make things right. Unfortunately for Ollie, he's the last person his former sidekick wants to see. 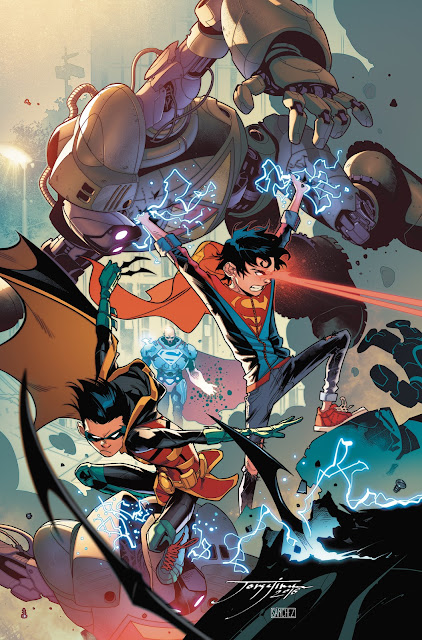 (W) Peter J. Tomasi (A/CA) Jorge Jimenez
"When I Grow Up" part two! Robin and Superboy - in the clutches of Lex Luthor! The boys are in big trouble! How exactly are they supposed to explain what's happened to Superman and Batman? Plus, Kid Amazo's power grows, and this tyrant in the making is about to make life miserable for the Super Sons! 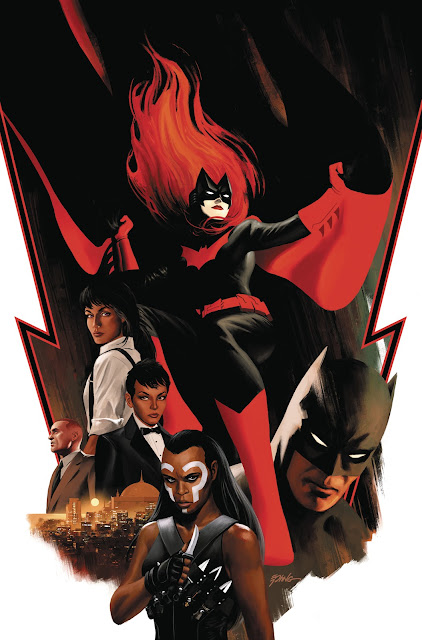 (W) Marguerite Bennett, James TynionIV (A/CA) Steve Epting
"The Many Arms Of Death" part one! At last - Batwoman is back in her own ongoing series! On the island nation of Coryana, anything goes for members of the criminal underworld... and during her lost years after being drummed out of the military, Kate Kane found a kind of refuge there. But now, a deadly new bioweapon is available in the markets of Coryana, and Batwoman will have to face up to the things she did in those days... and the people she left behind, some of whom would be happier to see her dead than alive! Writer Marguerite Bennett (DC BOMBSHELLS) is joined by James Tynion IV (DETECTIVE COMICS) and superstar artist Steve Epting (Captain America, Velvet) to present an epic Batwoman story that will alter the course of her life forever! This one's unmissable! 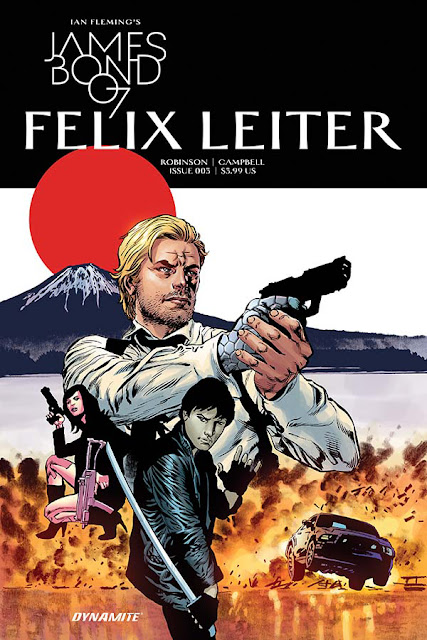 (W) James Robinson (A) Aaron Campbell (CA) Mike Perkins
In the aftermath of a major terrorist attack in Tokyo by an Aum Shinrikyo-like cult, Felix Leiter finds himself unwittingly drawn into the investigation. And under the oversight of Tiger Tanaka-the Japanese James Bond-and with a squad of Tanaka's elite operatives, Leiter himself helps to bring down the cult's leader!

But now it's up to Leiter and Tanaka to work desperately against the clock: they must discover the secret of the cultist's deadly bio-weapon - especially if they're going to try and avert another terrorist attack! 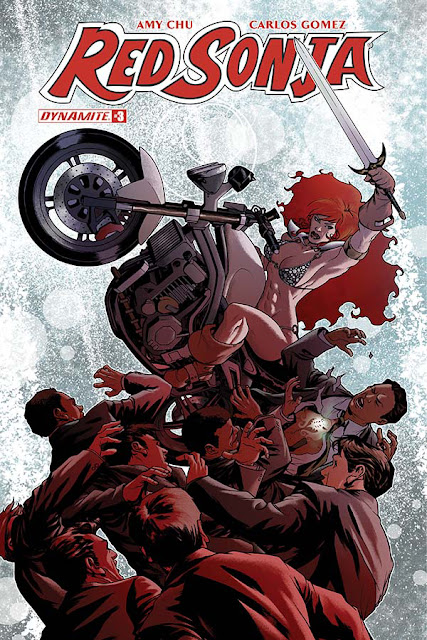 (W) Amy Chu (A) Carlos E. Gomez (CA) Mike McKone
Sonja reunites with her trusty sword with the help of her new friend NYPD cop Sir Max of Bushwick. Plus, the She-Devil finally comes face to face with her old foe, the evil sorcerer Kulan Gath, and gets some of her questions about this strange new world answered. 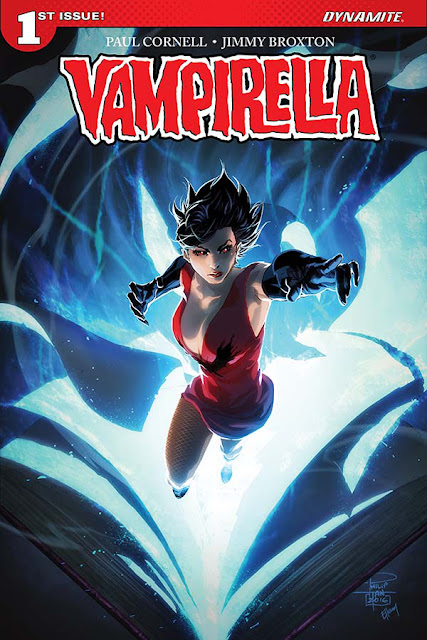 (W) Paul Cornell (A) Jimmy Broxton (CA) Philip Tan
After a sleep of over a thousand years, Vampirella finds herself back among the land of the living, but in a world far different than the one she remembers, where hope is laced with fear and blood has a far different taste.  And speaking of taste, finding an appropriate outfit for the era leads our fanged fatale to a chance encounter that will garner her not one but two potential allies. 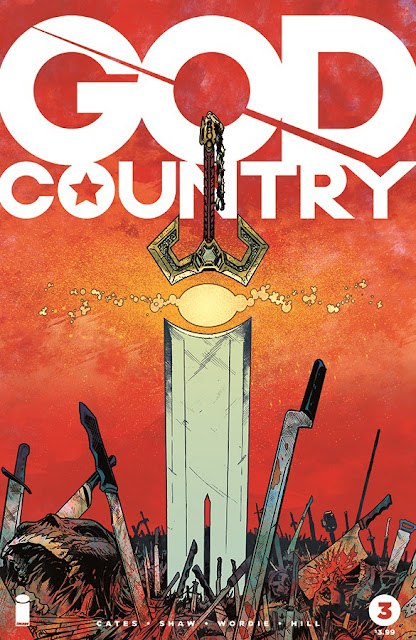 (W) Donny Cates (A/CA) Geoff Shaw
"DEATH IN TEXAS"-When Emmett Quinlan returned from the brink, his son thought his prayers had been answered. They had, but not by the god he'd prayed to. Now DEATH has come to West Texas to show the Quinlan family the price of resurrection... 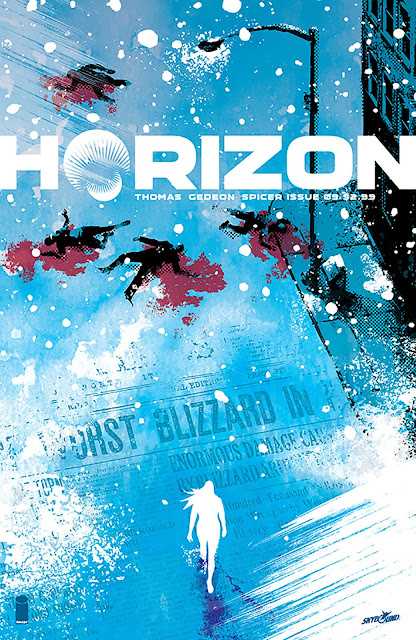 (W) Brandon Thomas (A) Juan Gedeon (CA) Jason Howard
"WEATHER ALERT STATUS: RED"-Forgiveness is not in Sherrie Davix's heart. For her commanding officer Zhia Malen. For the humans of planet Earth. Even for herself. As Sherrie embarks on her most dangerous mission yet, learn what drives Earth's most dangerous invader. 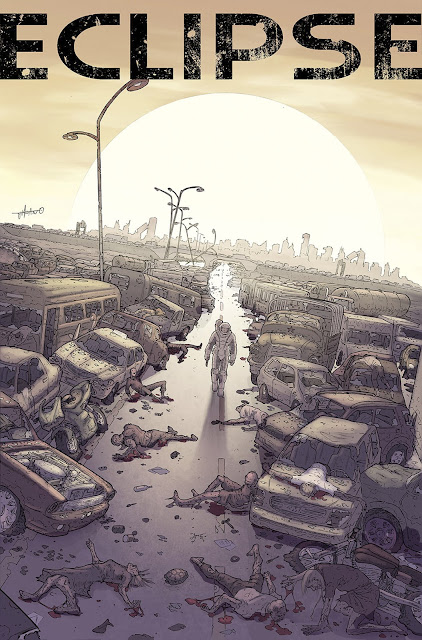 (W) Zack Kaplan (A/CA) Giovanni Timpano
NEW STORY ARC! In a world where sunlight burns people alive, newly appointed Solarity agent David Baxter is recruited for a secret mission into the dangerous, sun-drenched wasteland, while a troubled Cielo decides to investigate her father's company and the mysterious origins of the killer who didn't burn in the sunlight. 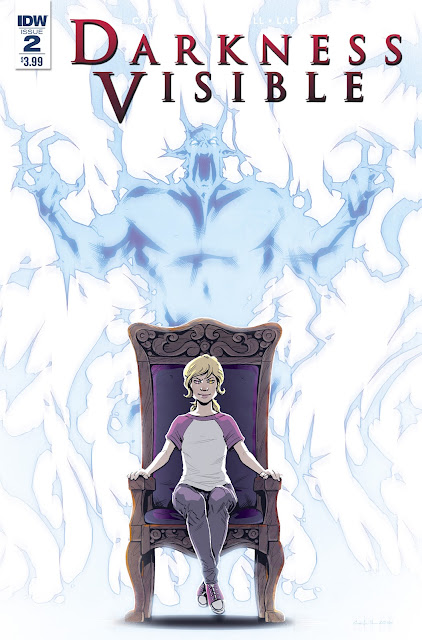 (W) Mike Carey, Arvind Ethan David (A/CA) Brendan Cahill
When the demons came, humanity reluctantly learned to share the world with another sentient race. Eighty years later, this uneasy co-existence has spawned an endless terrorist conflict. Detective Daniel Aston, charged with being the thin blue line between the two sides, is tested to the limit when a demon sets up house inside his soul. But to save his daughter, he'll pay any price-including genocide. 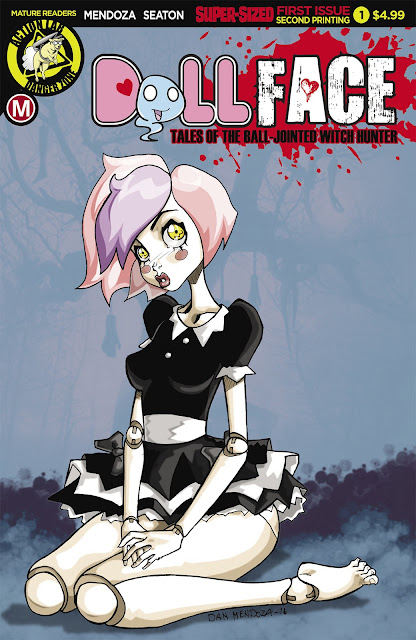 In the town of Boston, a witch-hunter lurks among the shadows, but this witch-hunter is like none you've ever seen. She is Lila, a 17th century soul that has been transported into present time and into the body of a life size, ball jointed doll, created by a couple of MIT students trying to use technology and a 3D printer to create the perfect women. Join in this super-sized debut issue and learn how she came to be known as DollFace, the ball jointed witch hunter.